Global fight for tech giants to pay bigger share: World’s largest nations are on verge of biggest global tax reforms for a century

By Tom Witherow, Business Correspondent For The Daily Mail and Daily Mail Reporter

Britain and the rest of the world’s largest nations are on the brink of agreeing to the biggest global tax reforms for a century.

It means the UK will be able to capture billions of pounds in taxes from technology giants and other big companies which shift profits around the world.

An agreement from the G7 group of nations – which also includes the US, Japan and Germany – could be reached as early as next Friday when finance ministers meet in London.

The central pillar of the deal will force companies to pay tax in the countries where their consumers spend their money, rather than shift them overseas. Some claimed the changes could shift £70billion of tax globally.

The rate of corporation tax in the UK is 19 per cent but this is set to rise to 25 per cent by 2023. The countries are also expected to agree to keep business tax rates above 15 per cent. The changes have been pushed by President Joe Biden. MP Margaret Hodge said: ‘People are appalled by Google and Amazon avoiding tax.’

She added: ‘This could be an historic agreement… It is vital these changes are put in place to force them to pay their fair share, just like British businesses.’

Tory MP Kevin Hollingrake urged major nations to ‘to secure a deal and sign up’, adding: ‘To work for the UK the deal must take account of where consumers are spending. If they agree on both pillars it would be tremendous, giving us a historic and much-needed agreement.’

The row over multinational companies moving tax offshore has raged for several years, as technology companies turned sales in the UK into profits in America.

The UK has been looking for ways to capture more tax, but under Trump’s ‘America First’ presidency, the US used its dominance to fend off demands for change.

The election of Joe Biden has changed everything. The centre-left Democrat is preparing a huge spending spree which will be funded by higher taxes on big business profits. Without changes to the global tax order he risks driving firms offshore.

At the same time, anger over US technology firms in Europe reached fever pitch leading the UK to target Facebook, Amazon, Google and others with a £400million ‘digital service taxes’. 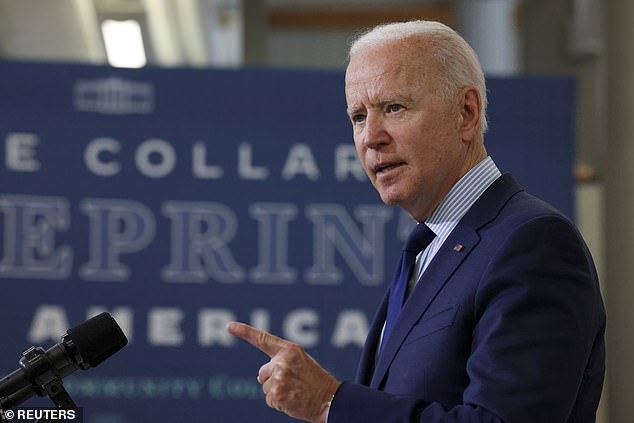 The election of Joe Biden (pictured) has changed everything. The centre-left Democrat is preparing a huge spending spree which will be funded by higher taxes on big business profits

The combination has brought the US to the table.

Chancellor Rishi Sunak is expected to swing behind Mr Biden’s demands for a minimum tax floor, which will hand the US up to $106billion (£74billion) in extra taxes, if the President will allow tech companies to be taxed in the UK.

The Treasury said: ‘It matters where tax is paid and any agreement must ensure digital businesses pay tax in the UK that reflects their economic activities.

‘We welcome the US’s renewed commitment to tackling the issue and agree that minimum taxes might help to ensure businesses pay tax – as long as they are part of that package approach.’ An agreement could also smooth the road to a post-Brexit trade deal with the US by diffusing tensions over trade.

There are still hurdles to overcome to reach a multilateral deal. Ireland, which has created thousands of jobs with its low tax regime, said he had ‘significant concerns’ about the plans.