The Tiger tank was greatly feared by the Allies in the Second World War – and with good reason.

It was superior to anything the British and Americans until near the end of war and had an almost mythical status.

According to the Tank Museum, the requirement for a 45 ton tank was issued in May 1941 and taken up by two firms,  Porsche Henschel.

Tiger tanks in action during the Second World War. The machines established a fearsome reputation among Allied troops

The first prototypes were hurriedly built for Hitler’s birthday and trials revealed that the Henschel design was the more practical with production beginning in July 1942.

By this time specifications had changed and the tank would weigh in the region of 57 tons, and mount an 88mm gun behind a maximum 110mm of armour on the turret front.

The Tiger first saw service against the Red Army in September 1942 and then against the Allies in Tunisia in December that year. 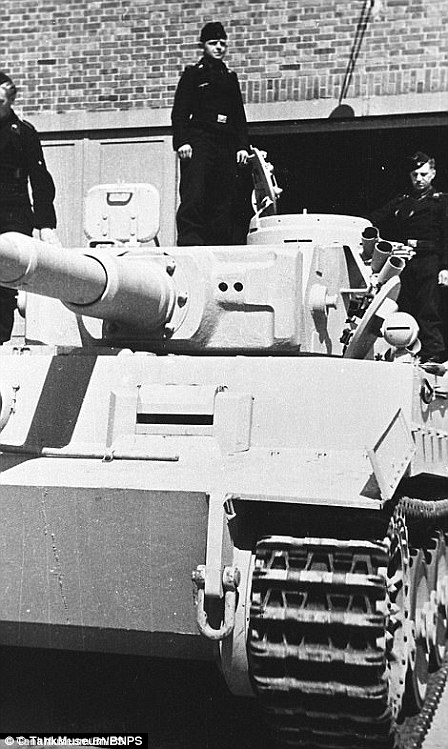 It soon established a fearsome reputation among British troops.

Such was the strength of its armour that startled British crews would see shells fired from their Churchill tanks simply bounce off the Tiger.

In an early encounter with the Allies in Tunisia, eight rounds fired from a 75mm artillery gun bounced off of the side of the tank from a distance of just 150 feet.

While it could absorb punishment, when it came to dishing it out, it used the destructive power of a gun which could fire shells each weighing nearly a ton, well over a mile.

Every contemporary Allied tank was vulnerable to the Tiger at 2,000 metres but most Allied tanks had to close to within a few hundred meters to stand any chance of damaging the Tiger.

The only British tank gun that could penetrate the Tiger’s armour was the 17pdr, only available in small numbers until the last few months of the war, mounted on the Sherman Firefly and some M10 Tank destroyers.

It would probably be fair to say that more Tigers were lost through mechanical failure than combat action.

The tanks had a top speed of 24mph but the V12 engine used up a lot of petrol doing 0.4 miles to the gallon.

It was designed to drive through four metres of water using a snorkel-type tube as it was too heavy to go over many of the bridges at the time.

It saw action in Russia, Tunisia, Sicily, Italy and north-west Europe although production was limited to just 1,354 tanks.

The Tiger was shrouded in secrecy and only the Wehrmacht knew how it worked and on Hitler’s orders, disabled Tiger tanks had to be destroyed on the spot.

Despite its formidable reputation, the Tiger had some drawbacks.

It wide it had to be narrowed down to travel by rail and in bad conditions the overlapping wheels trapped mud and ice sufficient to bring the big tank to a halt.

The engine had a nasty habit of catching fire while the gearbox, if subjected to great stress, was liable to break down.

Still, the tank had an impact far greater than the relatively few numbers the Germans were able to produce.