Just a handful of worshippers were seen offering their evening prayers at Mecca on Monday as Islam’s holiest city was ordered to remain under strict coronavirus curfew during the holy month of Ramadan.

Saudi Arabia began lifting country-wide lockdown measures this week but said a 24-hour curfew will remain in place at Mecca and Medina for the foreseeable future.

The city’s Grand Mosque, which is typically crowded at this time of year, has been all-but deserted since restrictions were first introduced on prayers on March 5.

Those offering prayers there on Monday observed strict social distancing rules while being watched over by members of the country’s police force. 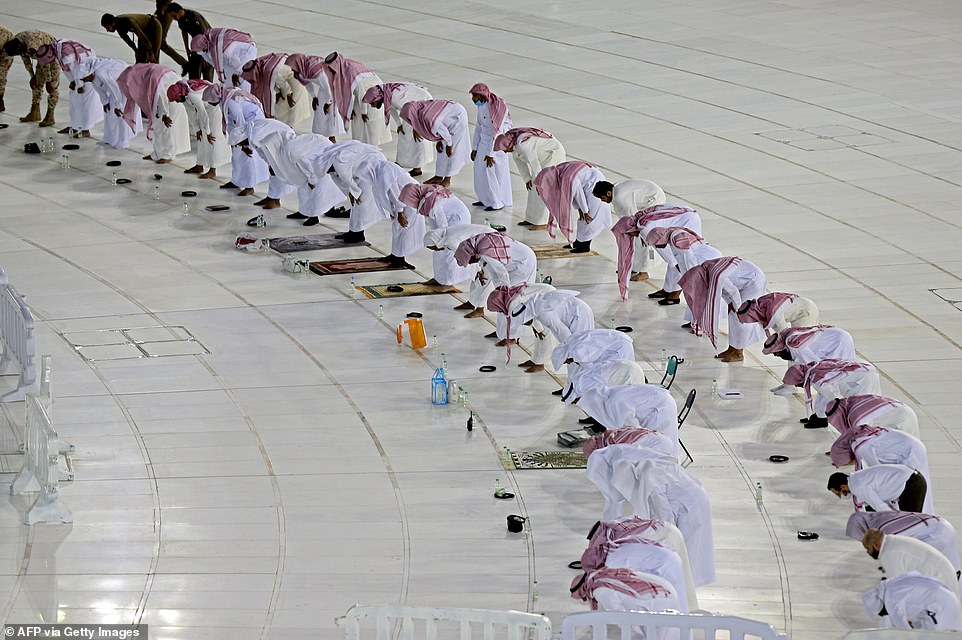 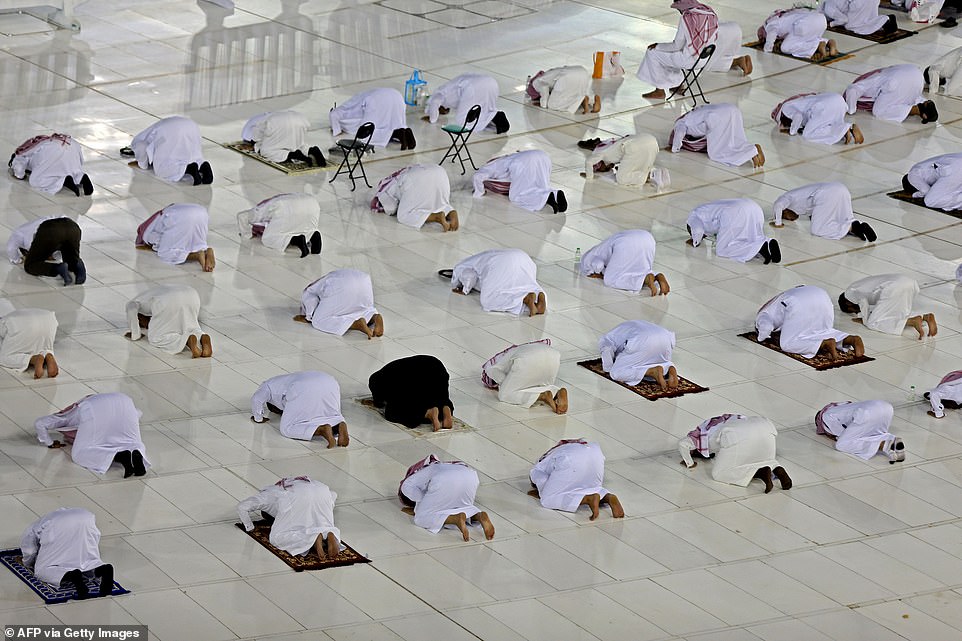 Mecca’s Grand Mosque is typically crowded each evening during Ramadan as people break their fast, but has been all-but deserted since coronavirus restrictions were introduced on March 5

In cities outside Mecca and Medina, people were allowed back on the streets between 9am and 5pm from Monday, while wholesale shops and shopping malls will be allowed to reopen from Wednesday.

Activities which do not allow for physical distancing, including salons and cinemas, will remain closed. Social gatherings of more than five people are forbidden.

Some cities – such as the capital Riyadh – have said banknotes will be banned and shoppers must pay by card.

Saudi Arabia announced 1,289 new coronavirus cases on Monday, bringing its total since the start of the outbreak to 18,811. Five more deaths from the virus were also recorded, bringing the death toll from 139 to 144.

Health officials warned that the number of cases will continue to rise after the kingdom struck a deal with China to conduct nine million coronavirus tests at six new labs across the country.

So far, a million people have been tested for the virus. 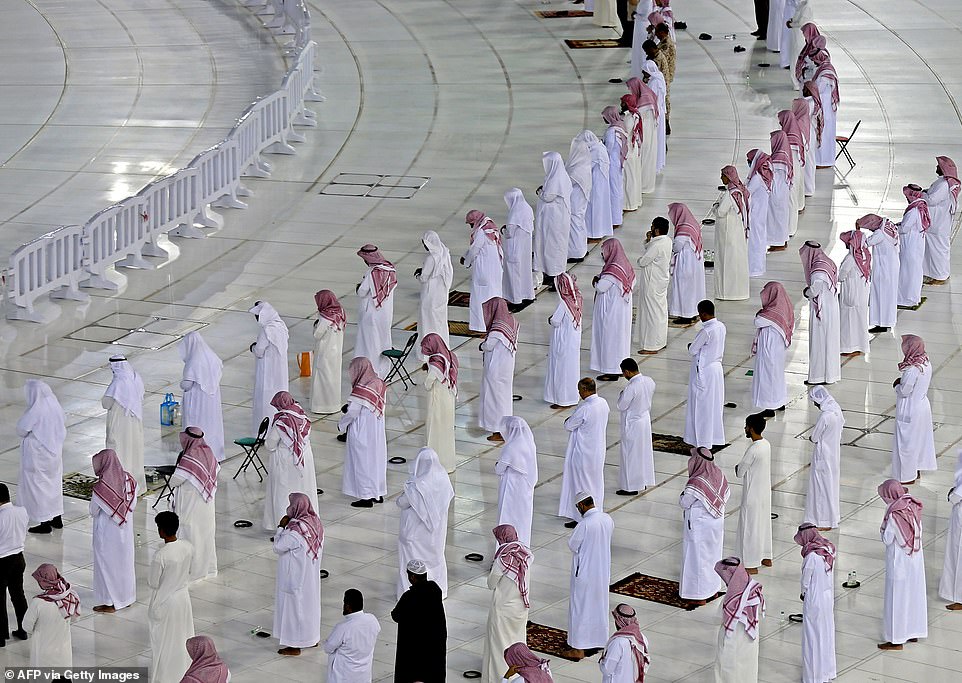 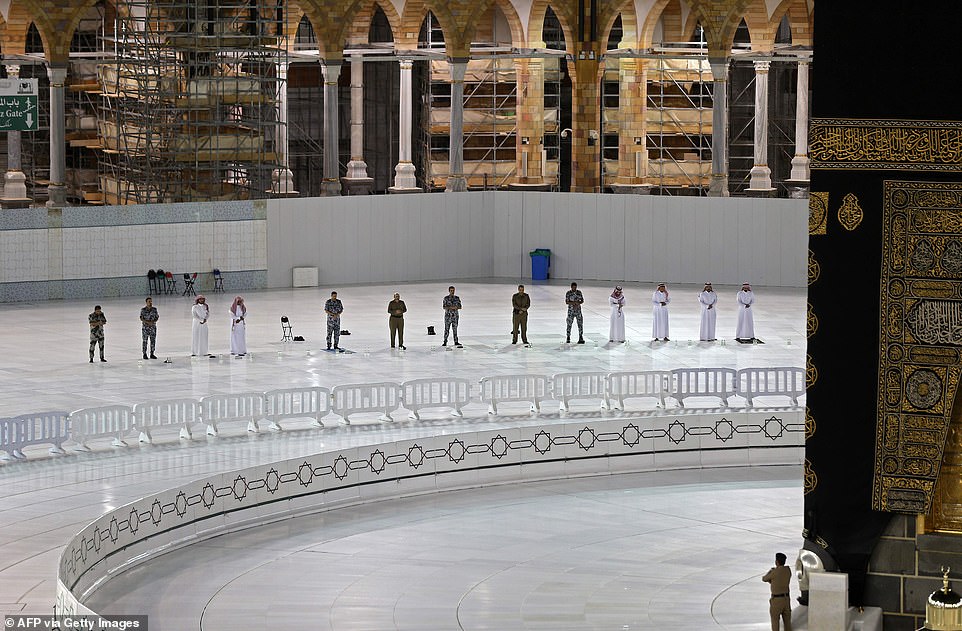 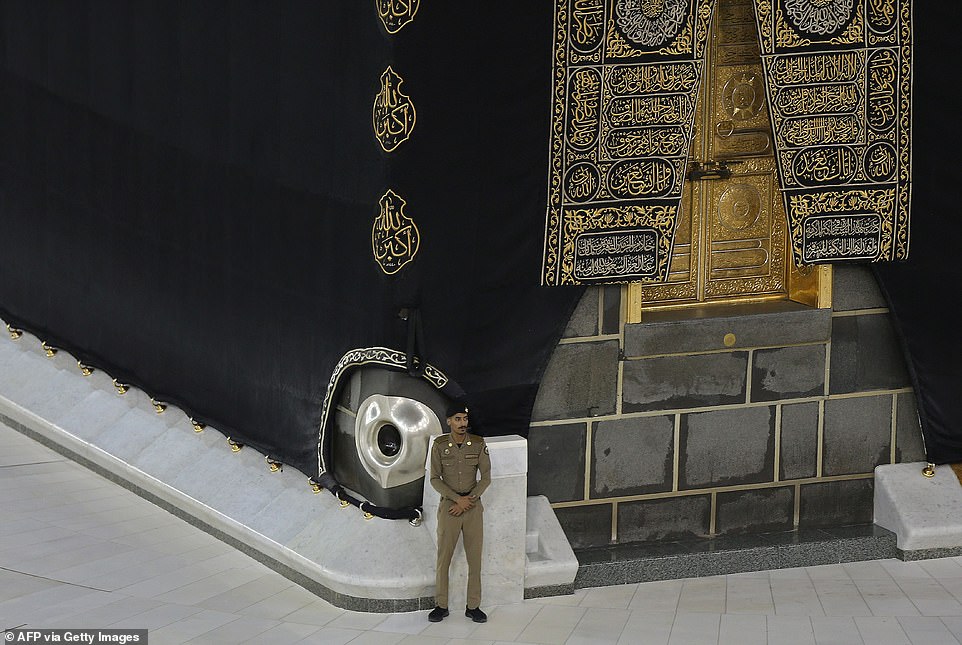 A Saudi police officer stands guard in front of the Black Stone, a holy relic which Muslims believe dates back to the time of Adam and Eve and is often touched by pilgrims. Touching the stone has been banned due to coronavirus

It comes amid rumours that the annual Hajj pilgrimage, which typically sees millions of worshippers flock to Mecca, will be cancelled for the first time in modern history.

Authorities have already advised those making plans to attend this year’s event, scheduled for the end of July, to reschedule. It would be the first time that Hajj has been cancelled since the founding of the Saudi state in 1932.

The year-round Umrah pilgrimage to Mecca was suspended in March for fears it would increase the spread of coronavirus in the Arabic kingdom.

On March 5 the Grand Mosque was completely closed so it could be disinfected, before reopening a few days later with touching of the cubic Kaaba shrine banned.

Since then it has been largely empty as Muslims were urged to stay away due to coronavirus.

It comes after Iran suffered the Middle East’s worst virus outbreak after refusing to shut down religious cities such as Qom despite evidence the virus was widespread there.

Millions of Muslims around the world are now celebrating Ramadan in relative isolation amid coronavirus lockdowns that have seen large gatherings – such as those where the fast is typically broken – banned.