Would YOU pay £50 for The Grinch to trash your house?

Festive fans from across the UK have been snapping up homemade experiences from the Grinch, which are being advertised on Facebook Marketplace.

Prices are ranging from £15 to £50 for the experiences, where an actor playing The Grinch comes to you home.

Typically, grinches offer to wrap you in toilet roll and have pillow fights with your children.

But last year, one experience went wrong – when an £85 Grinch trashed a woman’s house, drenching her son in green juice and allegedly destroying ‘every single bit of party food’.

A Grinch Experience from Facebook Marketplace. You too can pay good money to be wrapped up in toilet roll

The Grinch is a fictional grumpy and green character made famous by writer Dr Seuss.

He is best known as the main character of the 1957 children’s book How The Grinch Stole Christmas.

But there are an increasing number of impersonators every Christmas, most likely with people seeing it as an easy way to make money. 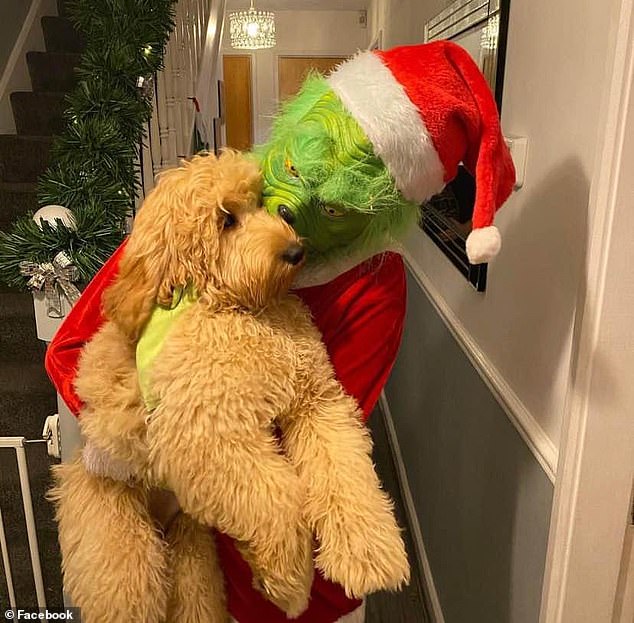 Grinches are paid to visit your home and have pillow fights with your children. Pictured: A dog not looking very impressed 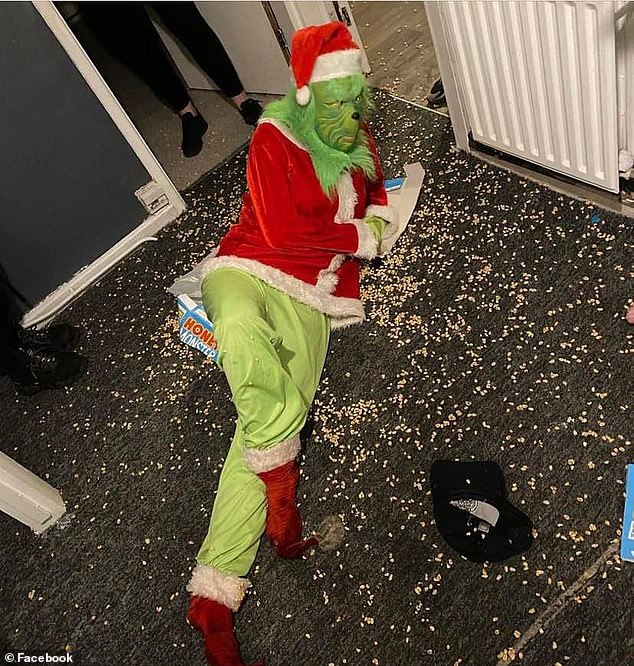 Writing on Facebook Marketplace, one character said: ‘Would anyone like a Grinch visit, £15 includes selection box, photos, dance and kids wrapped in toilet roll. £3 any extra kids.’

One commenter laughed: ‘I think this is possibly the most disturbing thing I’ve ever seen.

‘I’m also intrigued to know if they supply the kids wrapped in toilet roll or if I have to find my own?’

Remarking on the number of cut-down prices, another writer added: ‘Has the famous £85 grinch dropped its prices?’ 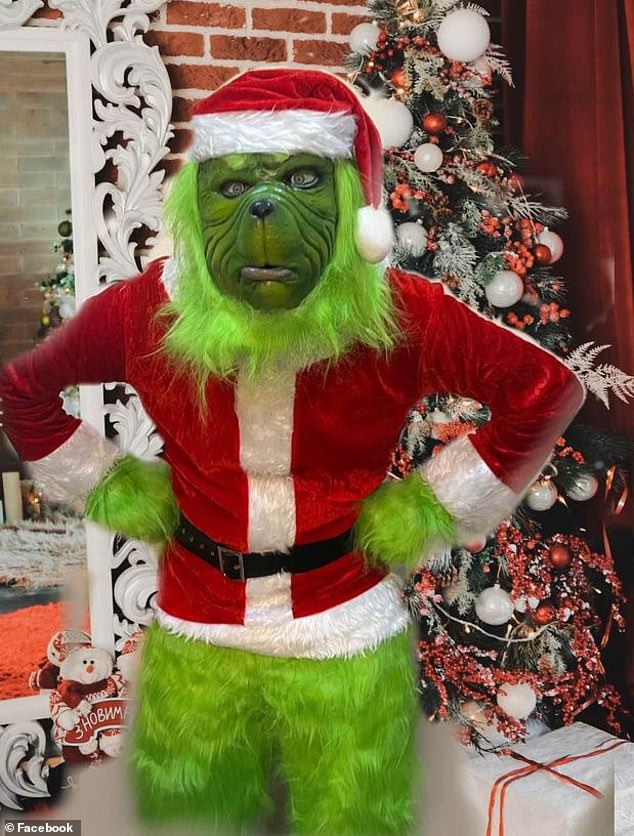 A grinch impersonator in Renfrew, Scotland advertised on Facebook, where visits cost £45 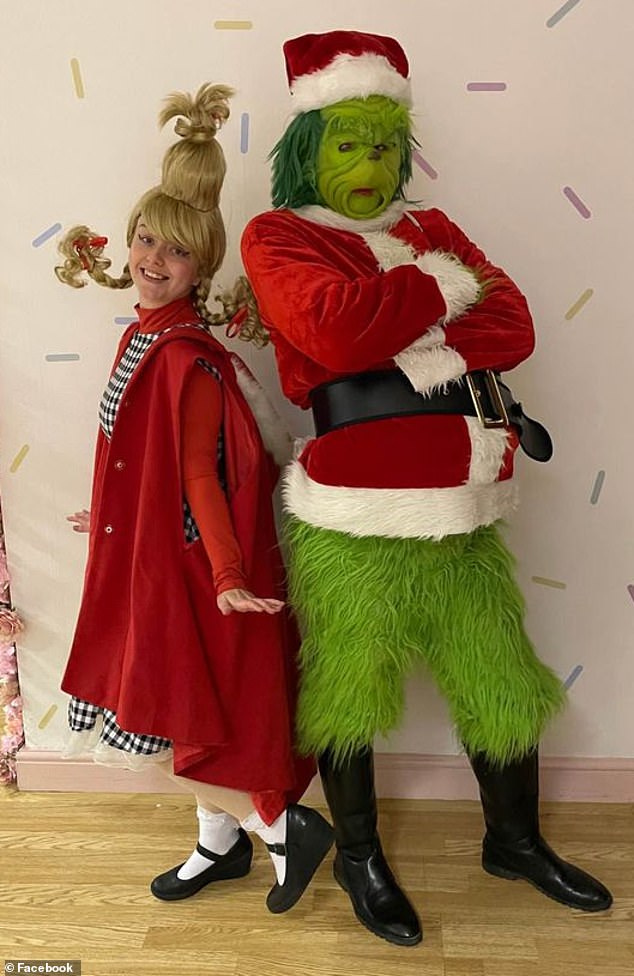 Another grinch visit in Birkenhead, Liverpool. Prices for a grinch visit range from £15 to £50 on Facebook marketplace 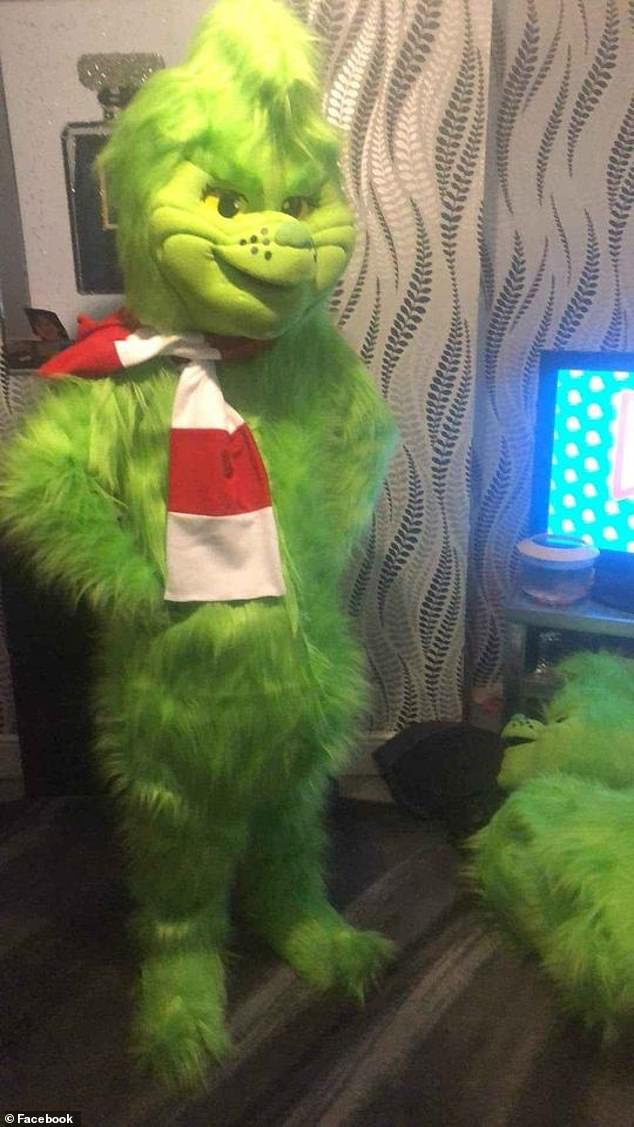 Another Grinch was pictured with a woman wrapped in festive toilet roll and said they were facing high demand for their £25 experience.

The Liverpool-based festive grump, who was also pictured lying on the ground surrounded by cereal, said: ‘Christmas visits available please message us for details booking up very fast.

‘You don’t want to miss out on our Grinch. He’s the naughtiest about.’

Another – for £45 – promised to get kids and family around Renfrew, Scotland into the Christmas spirit. 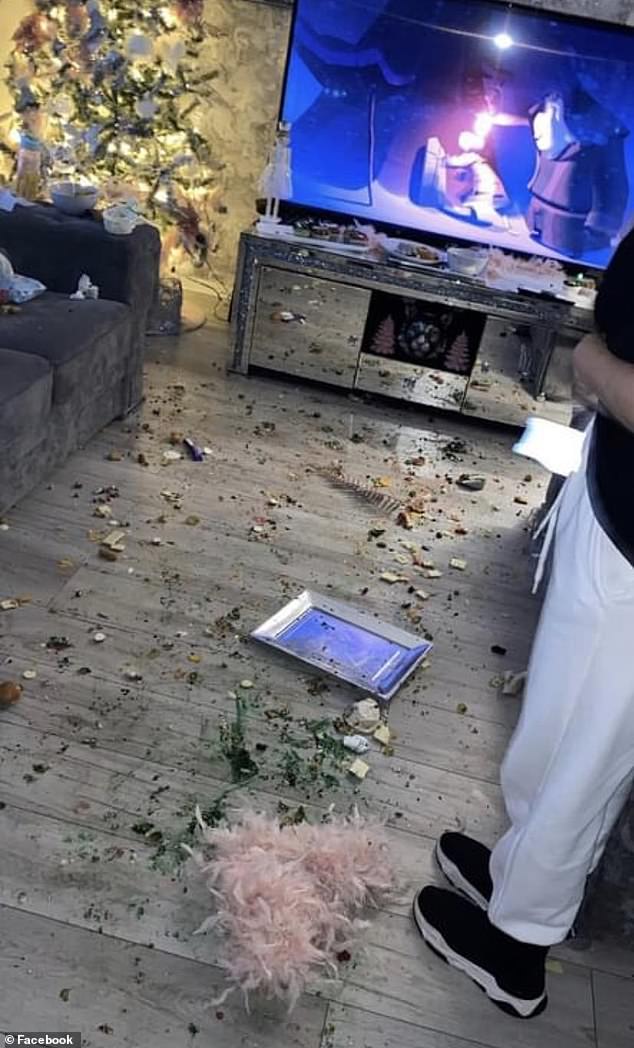 Laura Magill posted this in 2021, complaining she had been left outraged after a grinch trashed her house 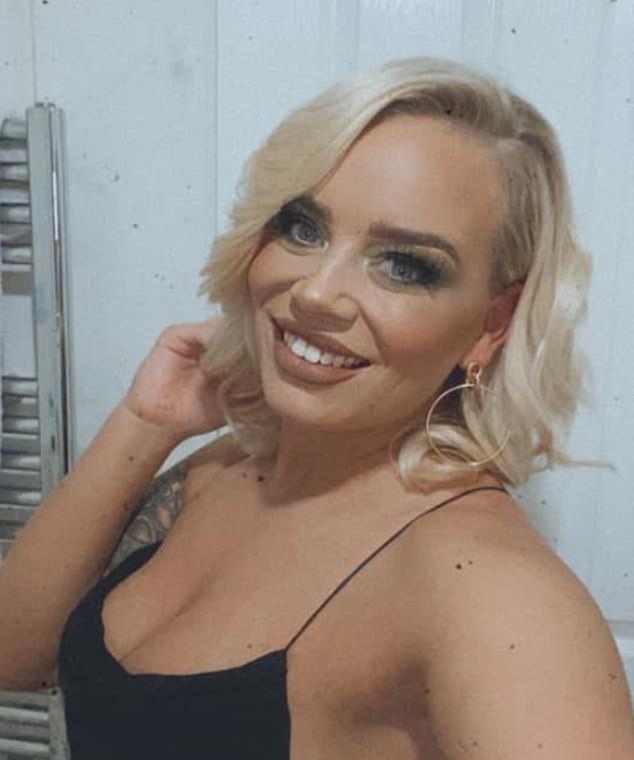 Ms Magill (pictured) wrote a post on Facebook, that has since gone viral, saying: ‘Fairy liquid [was] poured all over my kitchen floor, eggs smashed, and a full bottle of juice poured over my floor and son!’

But the experience doesn’t always work out.

In December 2021, Laura Magill, of Belfast, said she was left outraged after a Grinch impersonator who was supposed to mess up her children’s beds, put toilet roll around her tree and have a pillow fight, stole their Christmas, trashing her house.

The actor allegedly destroyed all the party food, broke the tree decorations and poured washing up liquid, juice and smashed eggs on the floor as well as her son.

Writing on Facebook, Laura, a mother of two, said: ‘So paid £85 for a Grinch visit… advertises the Grinch to come in, mess the kids beds, have a pillow fight, put toilet roll around your Christmas tree, and pictures with the kids at the end (they were told to leave no pictures) VS what I got…

‘Every single bit of party food and expensive cupcakes were thrown all over the place and tree decorations were broke.

‘Fairy liquid poured all over my kitchen floor, eggs smashed, and a full bottle of juice poured over my floor and son!

‘Kids new onesie is also ruined. Highly highly DO NOT recommend… emailed and complained but no reply. The Grinch definitely came and stole Christmas – never been so disgusted in my life!!!’

It appears Laura and her sister used the company Santa Stop Here Belfast. A response from the company to the viral post said ‘we hope you see the funny side’, alongside an image of a Grinch behind bars on their Facebook page.

A spokesperson for Santa Stop Here Belfast told MailOnline: ‘Laura’s sister hired us and was told in advance what was involved prior to the visit.

‘We’ve done 30 visits this year with no complaints. We have been doing this for three years in total.

‘Our grinch is loving the attention- we’ve had hundreds of booking enquiries today. The grinch also knew them personally – but hasn’t told them who was below the mask yet!’

However, social media users have been in ‘hysterics’ over the incident and said that the entertainer was ‘worth every penny’.

One user wrote: ‘Paid for the Grinch, got the Grinch. No pleasing some people!’

Another added: ‘Did she hire the Grinch or the Cat In The Hat?’

One more wrote: ‘There’s really money to be made out there, I too would like to be paid £85 to pour fairy liquid on someone’s kitchen floor.’

I’ve refused to invite my brother’s lonely friend for Christmas because I don’t want a stranger there – does that make me selfish?