Would YOU tell a friend they need to lose weight? Mother assures size 20 friend she is ‘not obese’

Would YOU tell a friend they need to lose weight? Mother divides opinion after reassuring her size 20 pal she ‘looks perfectly fine’ – because her husband called her a ‘fatty’

A mother has divided opinion over whether it is appropriate to tell a friend they need to lose weight.

Writing anonymously on Mumsnet, the woman – believed to be from the UK – explained how her size 20 friend had sought comfort after her husband teased her about her weight and called her an ‘official fatty’.

She reassured the friend that her weight was fine but said she was aware it may not have been in her friend’s best interests for her long-term health.

The woman’s post sparked a heat debate, with many people arguing she should’ve told her friend she does need to lose weight, while others said they would’ve responded in the same way.

Explaining the situation, the woman wrote: ‘A friend phoned me this evening in tears as her DH jokingly called her an “official fatty” after she came home from shopping.

‘She had shown him her new size 20 jeans but forgot to cut the size tag off like she normally does. That’s when he said those awful words. She asked me outright if I thought she was fat.’

She continued: ‘For starters I don’t like the word fat as I think it’s insulting and degrading. She’s short and, to be honest, is overweight but there’s no way I could have said this because she sounded distraught.

‘Instead I told her shes’s not at all overweight and looks perfectly fine. This seemed to reassure her which is good I guess, but it’s not strictly true or in her best health interests.’ 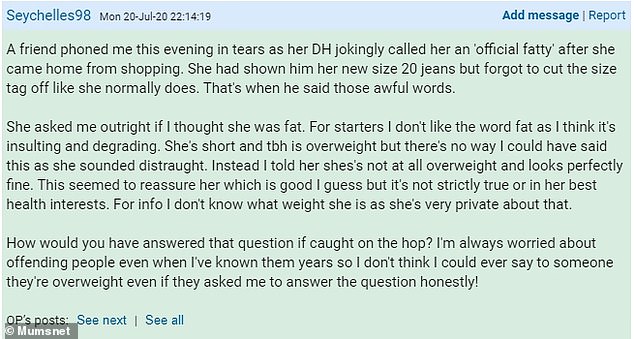 She went on to ask: ‘How would you have answered that question if caught on the hop?

‘I’m always worried about offending people even when I’ve known them years so I don’t think I could ever say to someone they’re overweight even if they asked me to answer the question honestly!’

A stream of responses blasted the woman for not being honest with her friend about the dangers of her size and how it could impact her health.

One person said: ‘I think you were in a difficult situation but no, I don’t think you did the right thing. I don’t see that she can really have believed you – no one at size 20 doesn’t realise that is a large size and she must be pretty overweight.

‘It’s done now and probably not appropriate for you to raise it with her but I think you should decide that if a similar conversation arises in future you are more honest with her.’

‘I would have told her the truth. Yes, she is overweight. Lying to her isn’t helping anything, and she knows the truth as well. Her cutting off the tags on her clothing is her just living in denial.’

‘I would also have offered all the support she needs to get healthy. Being short and a size 20 is very, very overweight and quite dangerous for her future,’ another said.

A third added: ‘I don’t think you should tell her she’s not at all fat, if she is a size 20 and cutting labels off her clothes, I’m sure she’s well aware that she is overweight.

‘You should be able to have honest conversations with your friends, but I’m sure she knows deep down that you were just trying to save her feelings.’

Meanwhile other users said that they would’ve also lied to their friend, agreeing it wasn’t the right time for an honest discussion about tackling her weight

Others attempted to reassure the woman that she had made the right decision to not criticise her friend’s weight.

One person said: ‘A little white lie in this context really doesn’t hurt in my opinion. Your friend probably realises she’s overweight really, it’s no one’s choice but hers how to handle that, so what would have been the point rubbing it in.

‘Her husband’s comment would have hurt her and you wanted to say something kind, presumably. I personally think a white lie is justified in these circumstances.’

Another confessed she wouldn’t want to destroy a friend’s self-confidence by telling the truth, but suggested an honest conversation could take place at a time when they’re not upset.

She wrote: ‘YANBU. I would have done the same as you op, it wasn’t the time to be telling her the truth, it would have destroyed her self confidence.

‘Maybe come back to it with suggestions when she’s less upset and ready to listen to you.’

WHAT IS OBESITY?ADULTS WITH A BMI OVER 30 ARE SEEN AS OBESE