A mangled and twisted vintage Jaguar that was crashed by its last owner some 1996 and never repaired has sold at auction for a staggering £90,000.

The ultra-rare 1960 Jaguar XK150 S 3.8 Drophead Coupe has been off the road since it slammed into a tree in Hull some 25 years ago – but it didn’t stop one collector paying the astronomical fee for the mangled motor, which was nine times the £10,000 to £15,000 pre-sale guide price for the car.

While that is undeniably a steep sum to pay for a vehicle is such a catastrophic state of disrepair, the selling auctioneer says it ‘looks worse than it is’ and – if fully restored – it could be worth up to £250,000!

The smashed-up Jag was sold this afternoon at the Bonhams MPH Auction in Bicester, Oxfordshire – a live ‘drive through’ sale with each lot driven in front of bidders so they can hear each one being started up and running, rather than just on static display.

It is one of the vintage motor lots that sold alongside the 2013 Range Rover previously owned by the Duke and Duchess of Kent, which was bought for £50,625 – some £15,000 over the higher estimate.

While the Royal Range Rover remains in exquisite condition, the same can’t be said about the sorry-looking Jaguar.

However, the battered example of the 1960 sports car is much rarer than a mass-produced gas-guzzling SUV – and far more valuable if refurbished to a high standard.

Just 2,672 examples of the XK150 were made by the British marque at its Coventry assembly plant shortly after the Browns Lane factory was rebuilt following a fire in 1957 that infamously claimed 9 of the 25 ultra-exclusive XKSS road cars featuring the Le Mans-winning D-Type’s engine.

The 3.8 S version was built between 1959 and 1960 and 282 were produced in total – and only 69 were right-hand-drive Drophead Coupes like the red rubble being auctioned in a few weeks.

The XK150 is an often overlooked vintage model from a glowing era for Jaguar, especially with its immediate successor being the renowned and now iconic E-Type. But, in decent condition, it’s still worth a pretty penny. 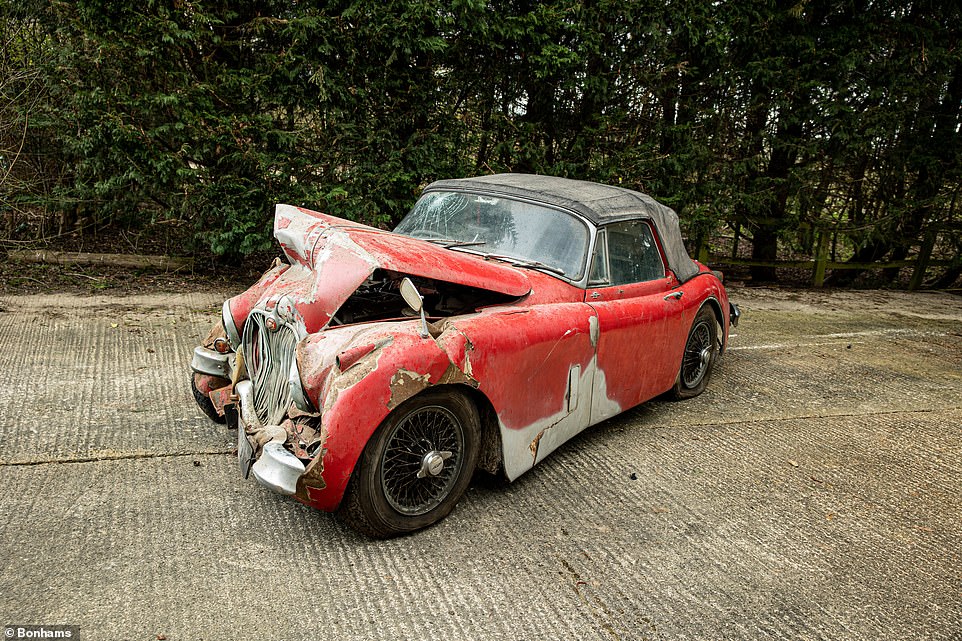 The Jaguar was crashed in 1996 by the current owner when the car skidded off the road and into a tree in the rain in Hull, East Yorkshire. The extent of the shunt is still clearly visible today. Still, a winning bidder forked out £90k on the mangled motor 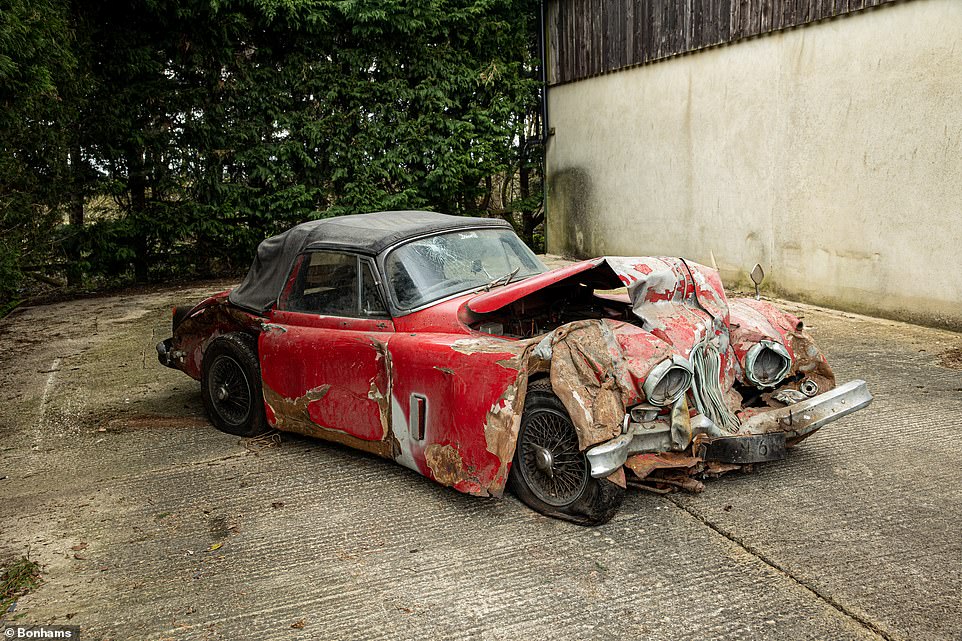 The former keeper, who first bought the super-rare Jaguar in 1971, collected the car from the crash scene on a trailer and transported it to a garage at his property, which is where it has remained for the last 25 years before going to the auction block 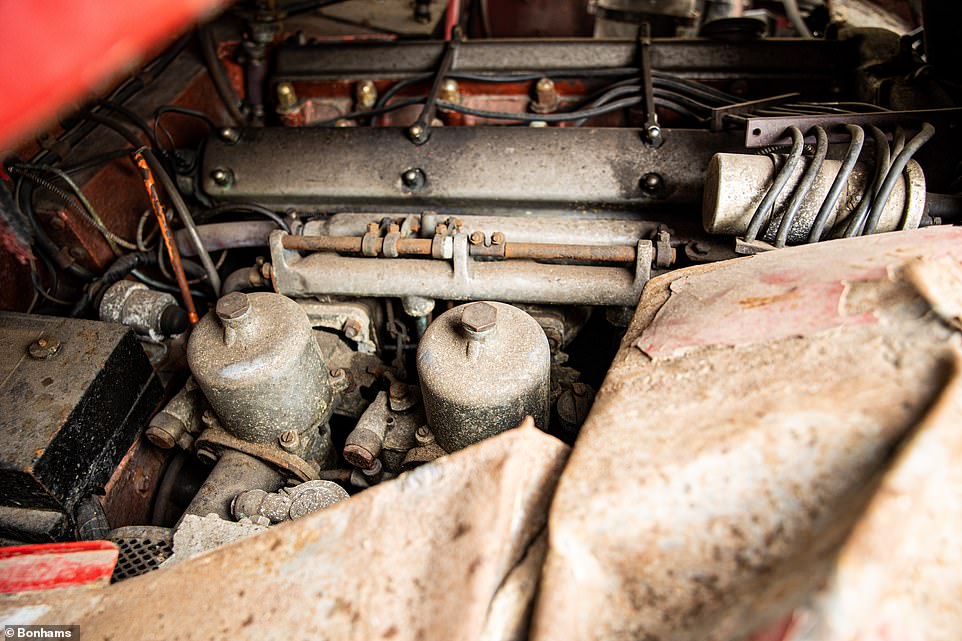 No attempt has been made to start the engine since the crash in 1996. Given the rarity of the model, a full restoration could provide more than a healthy financial return for the new owner

The 3.8-litre, straight-six-cylinder petrol engine fitted to ‘S’ versions like this one – in its heyday – produced a claimed 265 horsepower.

Accelerating from rest to 60mph took 7.3 seconds and the top speed was a then mesmerising 136mph. Fuel economy was just 18 miles per gallon – around the same fuel efficiency as a 2017 Ferrari F12 Berlinetta with a thunderous V12 engine under the bonnet.

The XK150 is also famed for being the first car to ever offer disc brakes on all four wheel (as an optional extra), which were 305mm Dunlop parts.

Dunlop Road Speed tyres were standard, though buyers could pay extra for 16-inch radial Pirellis. There was also the choice of solid wheels or – pricier – wire wheels, as this one has. 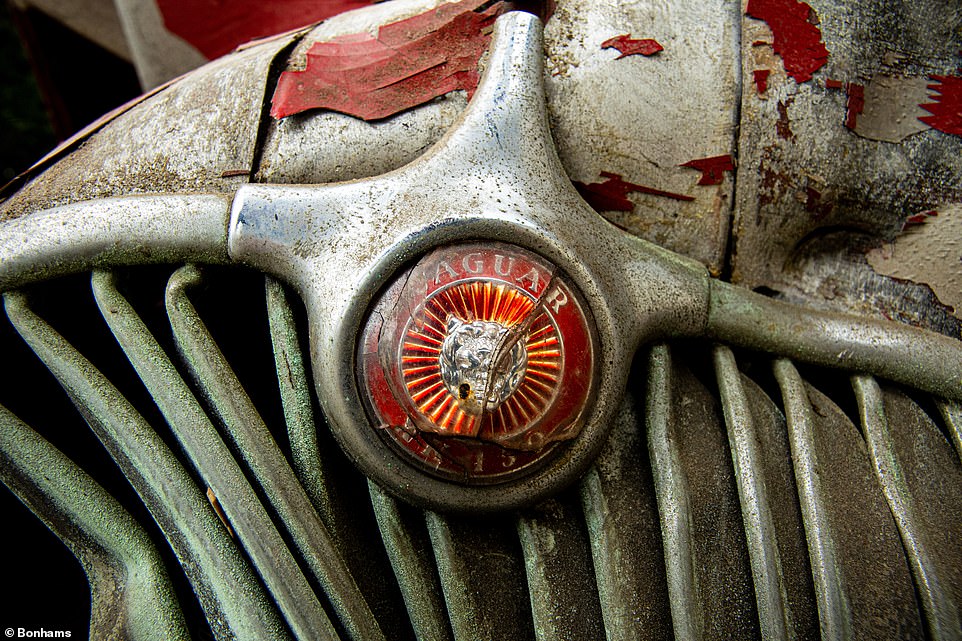 Extremely rare, just 69 examples of the XK150 in this guise were built in right-hand drive, making this an extremely collectible and sought motor indeed 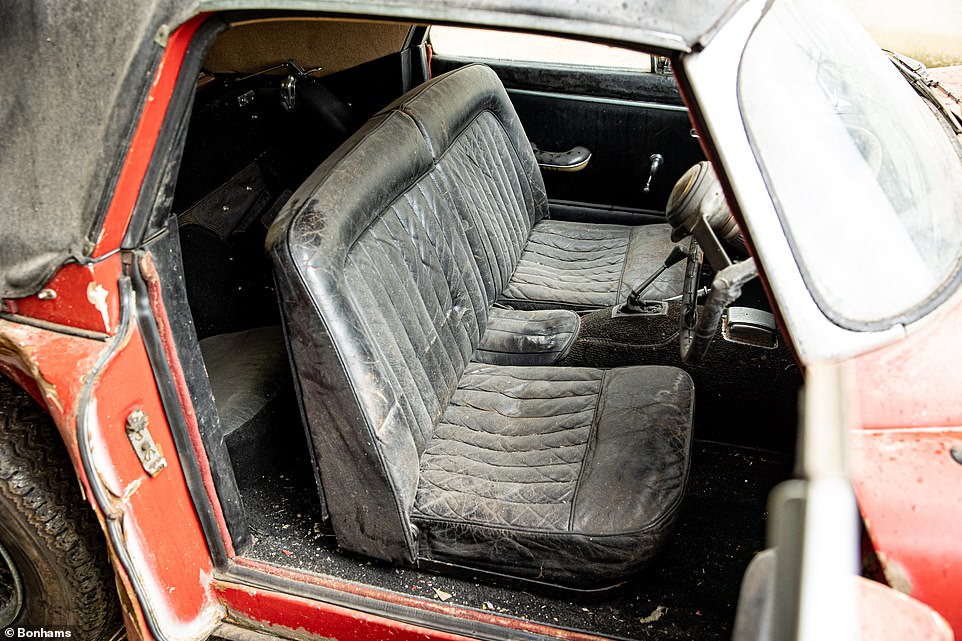 Bonhams says the leather interior is all original, which comes as little surprise given that the car hasn’t been sat in for 25 years 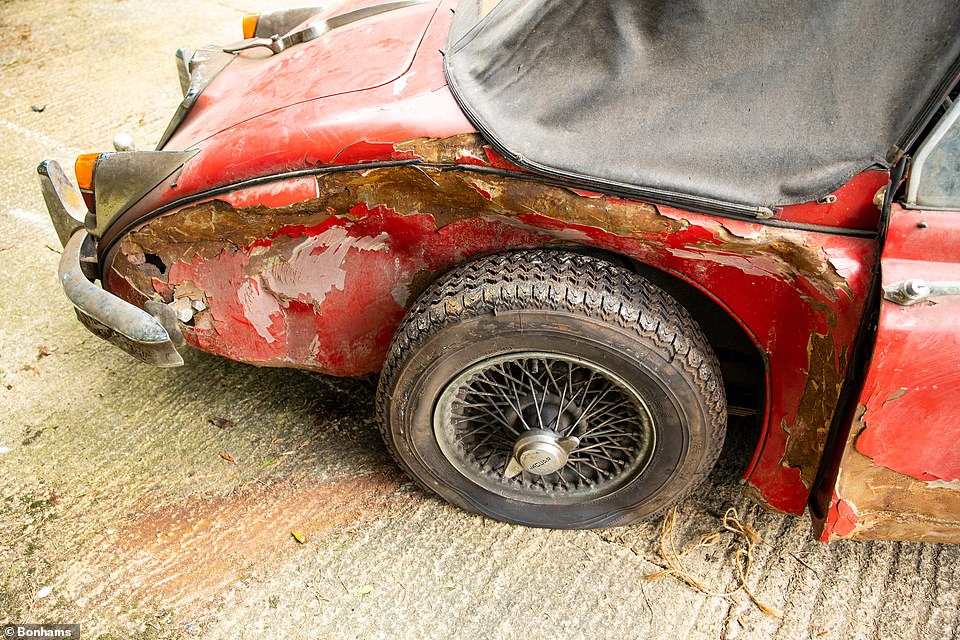 The seller of this battered example – first registered in 1 January 1960 and finished in Carmen red paint and a black leather interior – bought the car some 50 years ago, in late 1971.

He drove it for almost 25 years without issue. However, in September 1996 while on a wet road in Hull, East Yorkshire, the vendor and his Jag had an unfortunate encounter with a tree, which resulted in the damage to the car that you can still see the full extent of today.

With the bonnet crumpled, grille bent, headlights missing, engine shoved back towards the cabin and ‘NRN 6’ front registration plate twisted almost beyond recognition, the once proud Jaguar’s face is a sorry looking affair.

And it looks like the driver took a fair whack too, with the steering wheel taking the brunt of the impact and snapping under the force of the 1996 shunt. 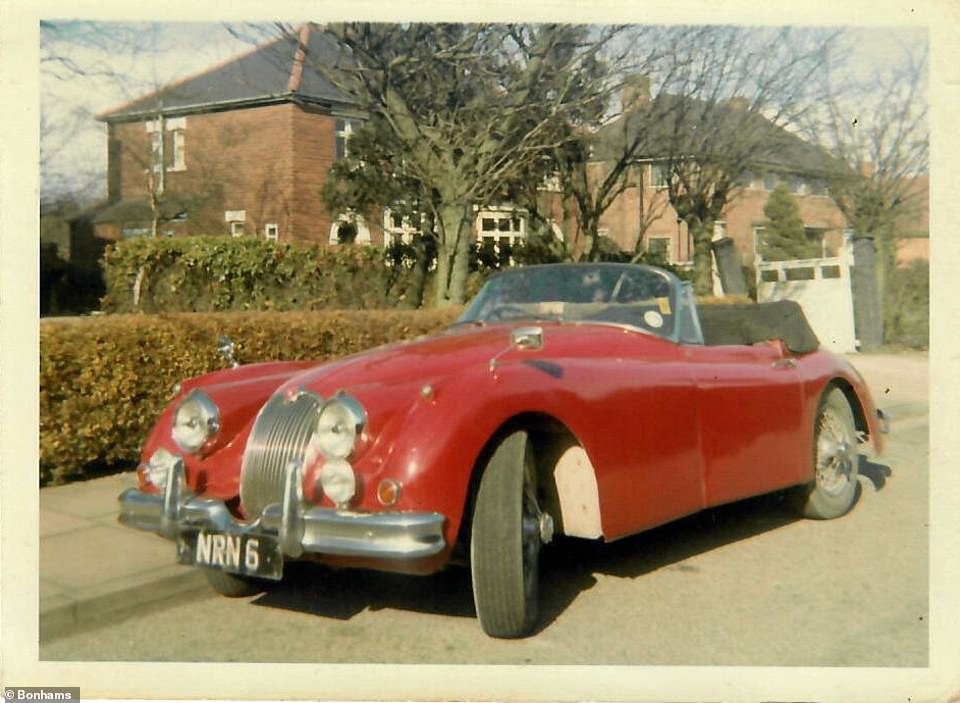 Here’s how the stunning Jaguar, registration ‘NRN 6’, looked before the crash into a tree in 1996 that caused the catastrophic damage. The photo was provided courtesy of the vendor

Left: The car’s registration document verifying it was first registered on 1 January 1960. The vendor bought it second-hand in 1971. Right: As seen in these two photos, the car was recovered on the back of a trailer in 1996 following the accident. It was taken to a garage and has been kept there ever since 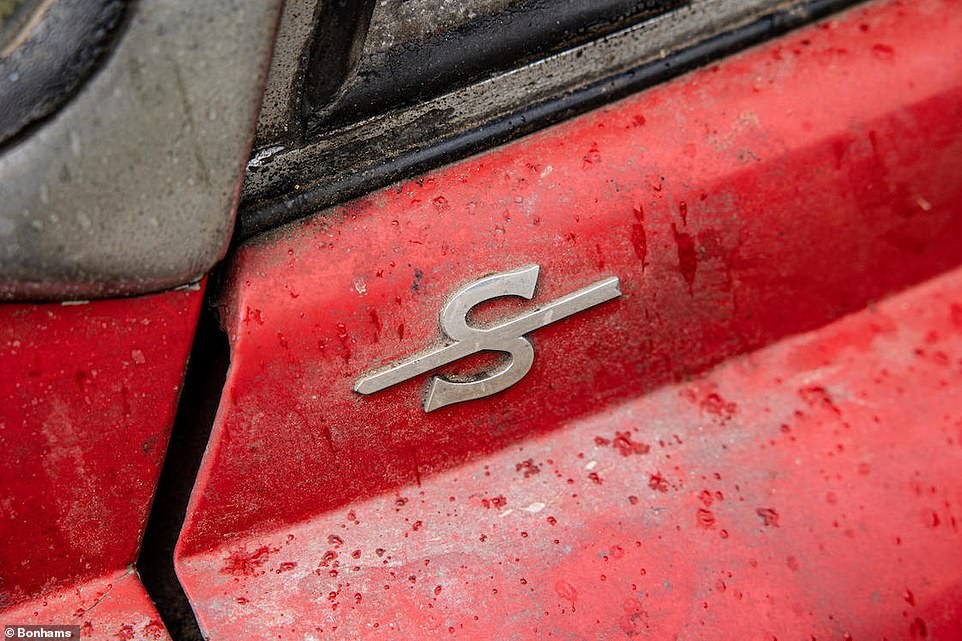 Just 282 versions of the XK150 3.8 S were built between 1959 and 1960, and only a fraction of these were right-hand-drive Dropehead Coupes like the one seen here 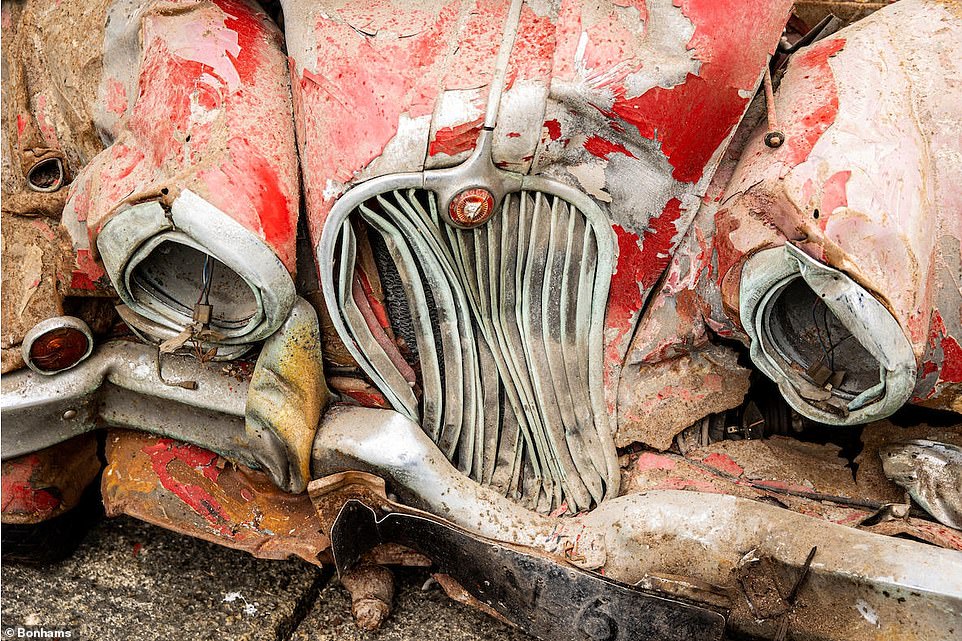 With the bonnet crumpled, the engine shoved back towards the cabin and the ‘NRN 6’ front registration plate twisted, the once proud Jaguar’s face is a sorry looking affair

Fortunate enough to walk away from the accident unscathed, the keeper picked up the car from the scene of the incident on a trailer and transported it to his garage at his property.

And it’s there the car has remained ever since, under the premise that it would be restored.

Having failed to get around to the job, and the car standing in a garage for over two decades and accumulating plenty of dust and cobwebs in the meantime, it was offer to auction as a ‘restoration project’ to the highest bidder.

Showing to have covered 115,763 miles in its 61-year life, the Jag was clearly a used – as well as treasured – motor, and despite the condition today still retains almost all of its original parts, most importantly the engine.

That said, it will need a substantial financial investment on top of the surprisingly steep auction purchase fee – and plenty of hours in a workshop – to bring it back to its absolute best. 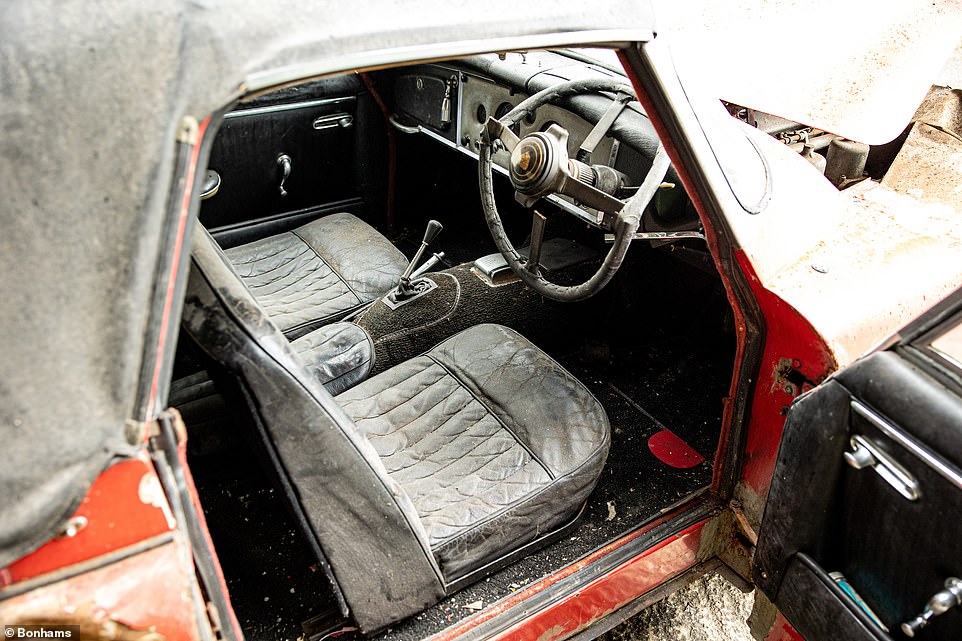 Rob Hubbard, head of Bonhams MPH, explained ahead of the auction that the steering wheel is broken from the impact of the crash but parts are ‘plentiful and relatively easy to obtain’ 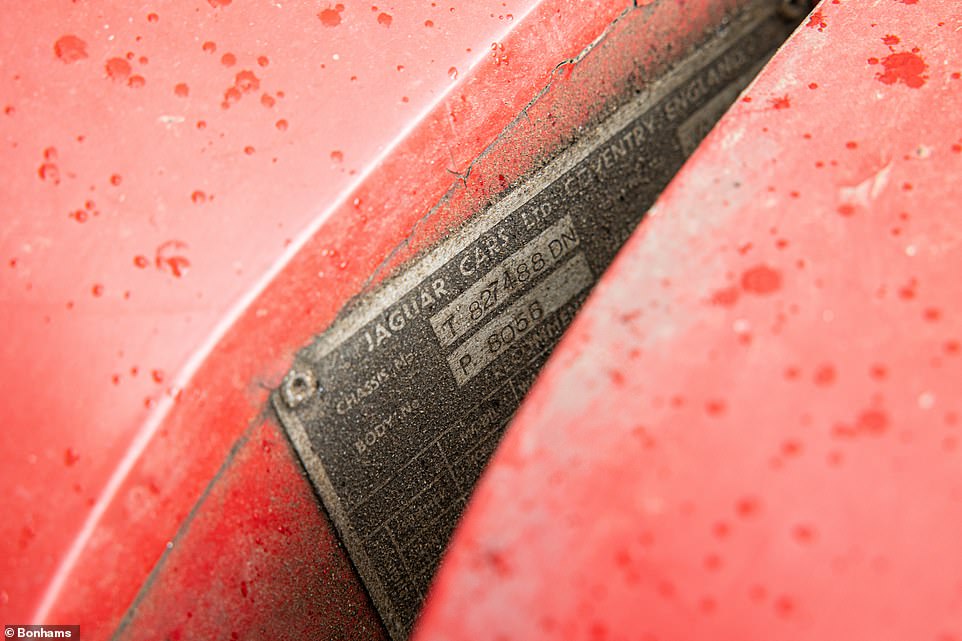 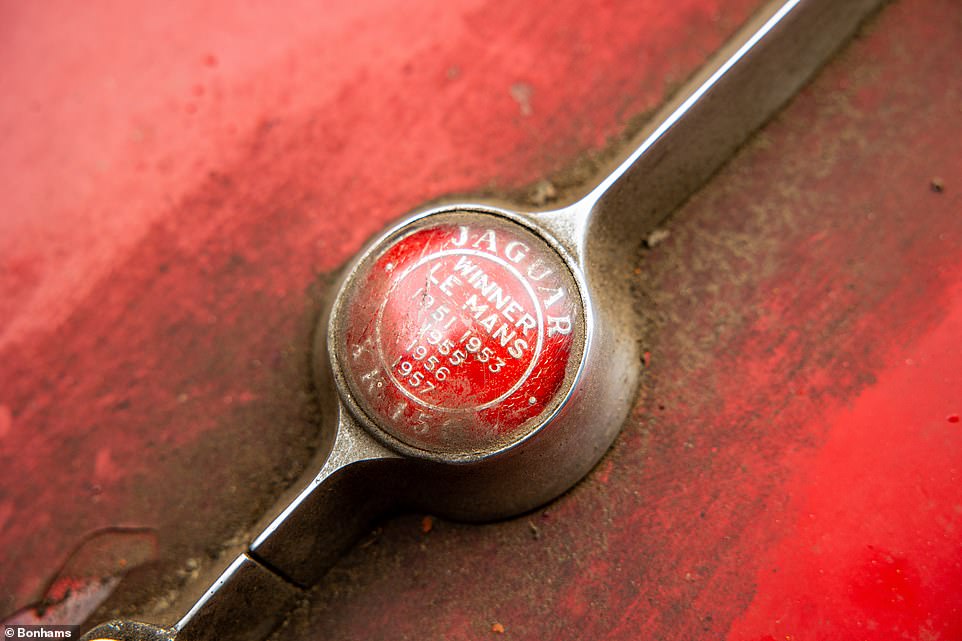 The Jaguar badge denotes the British marques list of wins during at the historic 24 Hours of Le Mans during the era. The XK-120C won in 1951, the C-Type took victory in 1953 and the three consecutive titles from 1955 to 1957 were all clinched by the legendary D-Type

Rob Hubbard, head of Bonhams MPH, explained exclusively to This is Money that the car ‘looks worse than it is’.

He told us ahead of today’s auction: ‘It has all its original leather and the original matching-numbers engine, which needs to be overhauled as it has not started for more than 25 years.

‘The steering wheel is broken, from the impact of the crash. However, parts are plentiful and relatively easy to obtain.’

And if the new owner completes the rebuild properly and gets the car back on the road in a fabulous condition, it could be worth a cool quarter of a million pounds, according to the auction house.

That’s almost three times what it sold for – though we can’t see there being much change left from the sizable and unique repair job ahead of the new keeper.

Examples produced: 282, though just 69 were right-hand-drive Drophead Coupes like this one 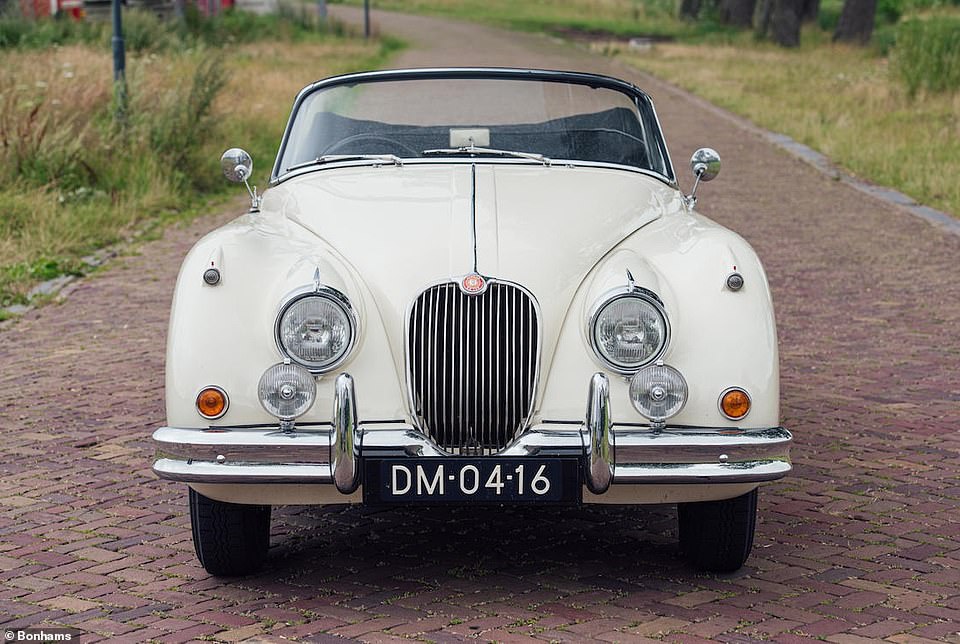 Once fully restored, this is how a sublime example of a Jaguar XK150 S 3.8 Drophead Coupe should look 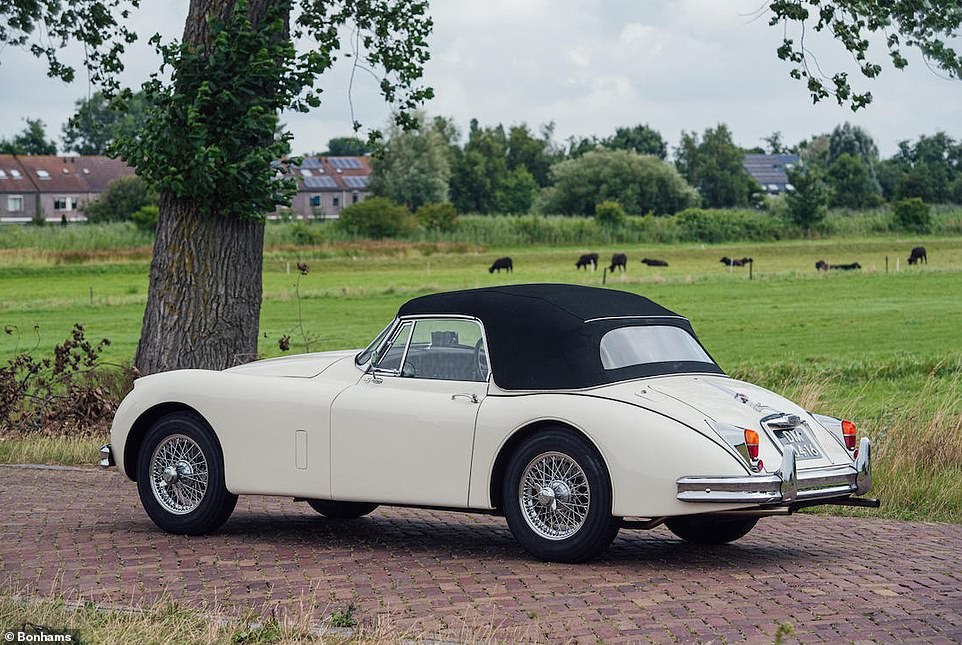 This very car was sold by Bonhams in September 2019. Like the mangled version sold this weekend, it is one of just 69 RHD examples. It sold for a fee of £161,000 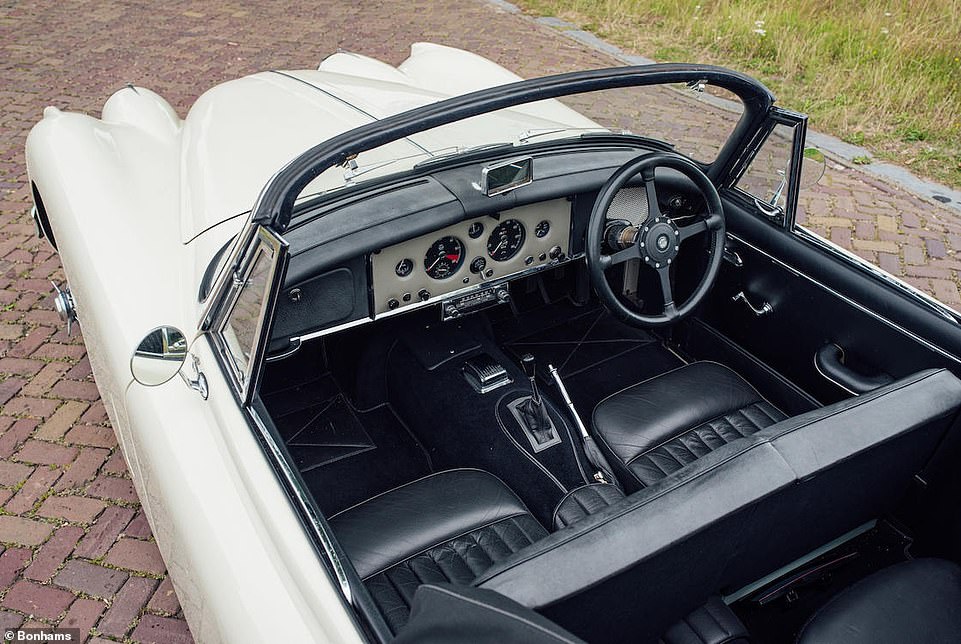 A prospective collector could be tempted to splash around £10,000 to £15,000 on the wrecked Jag knowing this is what the car could look like when completed – and will be well aware that the value once restored could soar by as much as 2400%

Has the winning bidder overpaid for the mangled Jag? Classic car expert reveals its market value

John Mayhead, Manager of UK Intelligence at classic car insurer and valuations company Hagerty: ‘For many purists, the Jaguar XK150 DHC was seen as a compromise: too heavy compared with earlier XK models and lacking the sporty design of the Roadster.

‘But today the model, with its all-round disc brakes, makes more sense, especially with the uprated ‘S’ specification engines offering 250bhp in the 3.4 and 265 in the 3.8.

‘Values tend to vary quite significantly according to origin, originality and condition. An imported, drivable 3.4 XK150S DHC without matching numbers would be valued in the Hagerty Price Guide at £54,000, whereas a pristine, home-market concours 3.8 example would be valued at £197,500.

‘This has dipped slightly since the April 2017 Hagerty Price Guide when top values peaked at £209,000.

‘And recent auction results have been mixed. Of all 29 sales of XK 150s (of all body styles) that Hagerty tracked since January 2020, only 45 per cent reached their reserve.

‘These figures are likely to result in a downward movement in their values when the Hagerty Price Guide is next updated in June 2021.’