WWE’s McMahon taking another shot at a pro football league

WWE founder and chairman Vince McMahon is ready to take another shot at pro football 20 years after his first foray into the sport.

The 72-year-old wrestling promoter and his company Alpha Entertainment announced Thursday that the XFL will relaunch in 2020 with an eight-team league of 40-man rosters and a 10-week schedule.

‘The new XFL is an exciting opportunity to reimagine America’s favorite sport,’ said McMahon in a statement. ‘As we move towards kickoff, we look forward to listening and implementing innovative ideas from players, coaches, medical experts, technology executives, the media and most importantly football fans.’

A month ago, the WWE filed paperwork with the Securities and Exchange Commission declaring that McMahon sold about $100 million in WWE stock to fund Alpha Entertainment and its investments, such as ‘professional football.

As a result, World Wrestling Entertainment’s stock price dropped $2.32, or 7.3 percent, to $29.55 after the company disclosed that McMahon sold 3.3 million shares. McMahon said he plans to remain its chairman and CEO of WWE, and he remains its main shareholder. 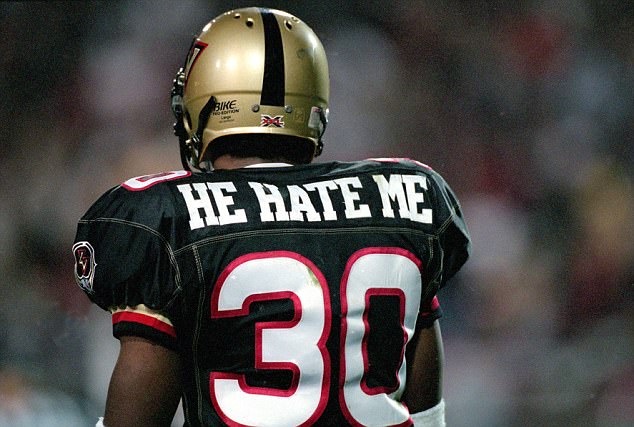 The XFL is best known for halfback Rod Smart, who had his bizarre nickname, ‘He Hate Me,’ emblazoned on the back of his Las Vegas Outlaws jersey. Smart later played briefly in the NFL 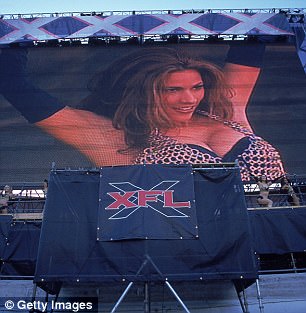 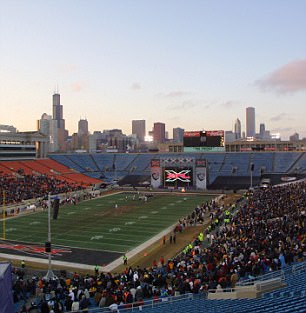 (Left) A general view of a Los Angeles Xtreme cheerleader performing on the big video monitor before the game against the Chicago Enforcers at the L.A. Coliseum in 2001. (Right) Chicago’s Soldier Field, home to the ‘Enforcers,’ nearly empty during an XFL game

A joint venture with NBC, which did not have NFL television rights at the time, the XFL promised to be a harder-hitting league than the United States’ top professional sports property.

The rule changes were aimed to promoting the XFL’s tougher image. 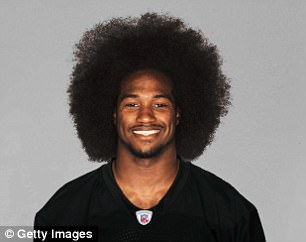 Rod Smart remains the only breakout star from the XFL, thanks to his colorful nickname

Artificial turf was banned, as were point-after touchdown kicks and fair catches. And instead of a coin toss, opening possession was determined by an ‘opening scramble,’ in which a player from each team fought to retrieve a football placed 20 yards away. The XFL also reduced the NFL’s 40-second play clock to just 35 seconds to speed up the pace of play.

Players all made less than $5k per week, although some used the XFL as an audition for the NFL.

One such player, Rod Smart, became an instant celebrity because of the nicknamed he had emblazoned on the back of his Las Vegas Outlaws jersey: ‘He Hate Me.’

Smart, who would go on to play for the NFL’s Carolina Panthers, explained the bizarre nickname to the Milwaukee Journal Sentinel: ‘Basically, my opponent is going to hate me. After I win, he’s gonna hate me. It is what it is. It’s a saying I was saying when I’d feel something wasn’t going my way. For example, [when] I was on the squad in Vegas and coach was putting other guys in, [if] I felt I’m better than them, you know, hey, ‘he hate me.’ See what I’m saying?’

The ‘He Hate Me’ jersey was the XFL’s top seller. 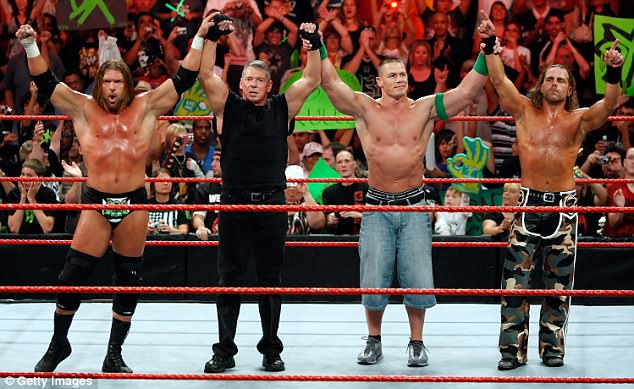