A US judge said Yahoo must face nationwide litigation brought on behalf of more than one billion users who said their personal information was compromised in three massive data breaches.

Wednesday night’s decision from US District Judge Lucy Koh in San Jose, California, was a setback for efforts by Verizon Communications Inc, which acquired Yahoo’s Internet business in June, to limit potential liability.

The breaches occurred between 2013 and 2016, but Yahoo was slow to disclose them, waiting more than three years to reveal the first.

Revelations about the scope of the cyber attacks prompted Verizon to lower its purchase price for the company from $4.76billion to $4.48billion.

A US judge said Yahoo must face nationwide litigation brought on behalf of more than one billion users who said their personal information was compromised in three massive data breaches between 2013 and 2016 (Pictured, company headquarters in Sunnyvale, California)

In a 93-page decision, Koh rejected Yahoo’s contention that breach victims lacked standing to sue, and said they could pursue some breach of contract and unfair competition claims.

‘All plaintiffs have alleged a risk of future identity theft, in addition to loss of value of their personal identification information,’ the judge wrote.

Koh said some plaintiffs also alleged they had spent money to thwart future identity theft or that fraudsters had misused their data.

Others, meanwhile, could have changed passwords or canceled their accounts to stem losses had Yahoo not delayed disclosing the breaches, the judge added.

The hackers are believed to have grabbed names, email addresses, phone numbers, birthdays, encrypted passwords and the ‘unencrypted’ security questions and answers of its users.

While many claims were dismissed, Koh said the plaintiffs could amend their complaint to address her concerns.

‘We believe it to be a significant victory for consumers, and will address the deficiencies the court pointed out,’ said John Yanchunis, a lawyer for the plaintiffs who chairs an executive committee overseeing the case. ‘It’s the biggest data breach in the history of the world.’ 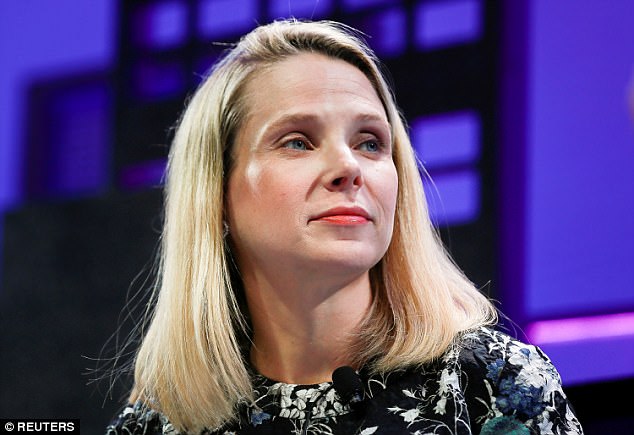 Then-CEO Marissa Mayer (pictured, November 2015) was not paid her 2016 bonus, worth as much as $2million, nor her 2017 equity grants as a result of the hacking incidents

Yahoo is now part of a Verizon unit called Oath. Once the deal was closed in June, then-CEO Marissa Mayer stepped down.

Mayer was not paid her 2016 bonus, worth as much as $2million, nor her 2017 equity grants as a result of the hacking incidents.

In court papers, Yahoo had argued that the breaches were ‘a triumph of criminal persistence’ by a ‘veritable “who’s who” of cybercriminals’ and that no security system is hack-proof.

On March 15, the US Department of Justice charged two officers of the Russian Federal Security Service and two hackers in connection with the second breach in late 2014.