Controversial Muslim activist Yassmin Abdel-Magied has confirmed a complaint has been lodged about her at the Australian Human Rights Commission.

The 26-year-old London-based writer, who grew up in Brisbane, told her 47,000 Twitter followers her social media messages had upset someone.

‘So apparently my tweets are worth complaining about to the Aus Human Rights Commission,’ she said on Wednesday before deleting that message.

The 26-year-old London-based writer told her 47,000 Twitter followers her social media messages had upset someone

‘I can’t give you more details … but it does make me wonder – should I have been reporting every single thing that people said to me that was racially, religiously or sexually charged?.’

The Human Rights Commission would not confirm to Daily Mail Australia if a complaint had been made about Ms Abdel-Magied, who last year moved to the U.K.

She did not disclose which of her tweets had prompted the complaint.

The founder of Youth Without Borders has been a magnet for controversy since April last year, when she linked Anzac Day with the plight of Palestinians and asylum seekers held in Papua New Guinea and Nauru.

While she apologised for that message, she last month stirred more controversy when she linked diversity quotas with Western colonialism. 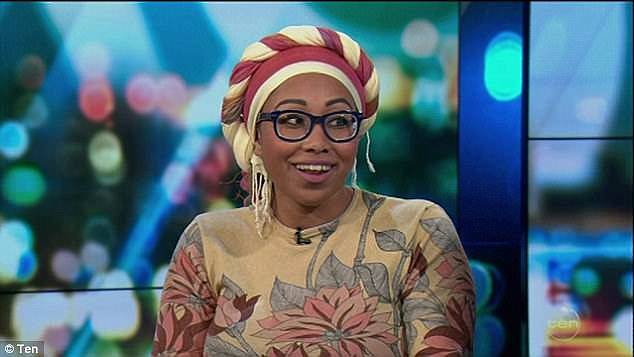 In November, she told The Project her treatment in Australia by her critics was like an abusive relationship

‘Don’t like ‘diversity’ quotas? Well, your ancestors shoulda thought about that before they went all over the world colonizing and enslaving. #justsayin,’ she wrote in January.

In November, the former ABC-TV host controversially likened Australia’s treatment of her to an abusive relationship, telling The Project it was ‘like dating an abusive guy, you love a lot of things about them but they hurt you deep’.

Former Labor leader Mark Latham in August accused her of anti-white racism after she engaged in a controversial Twitter conversation with journalist Osman Faruqi about the dual citizenship crisis in parliament.

Faruqi, who has taken legal action against Mr Latham, had tweeted ‘the white people are getting f***eed, Yas, it’s happening,’ to which she replied: ‘Hahahaha. Look, they wanted people to go back to where they came from … and they didn’t realise it included them too?’.

In April last year, she was widely slammed for her Anzac Day tweet which said: ‘Lest. We. Forget. (Manus, Nauru, Syria, Palestine)’.