A French man who was struck in the eye by a rubber bullet at a ‘Yellow Vest’ protest has revealed his life-changing injuries.

Jean-Marc Michaud, a 41-year-old horticulturalist from Charente-Maritime on France’s southwest coast, has just been released from hospital after having his right eye removed.

He was hit the face by a rubber projectile fired by French police at a December anti-government demonstration in Bordeaux.

Jean-Marc Michaud, 41, removes an eye patch to show his injury sustained by a rubber projectile in Bordeaux in December 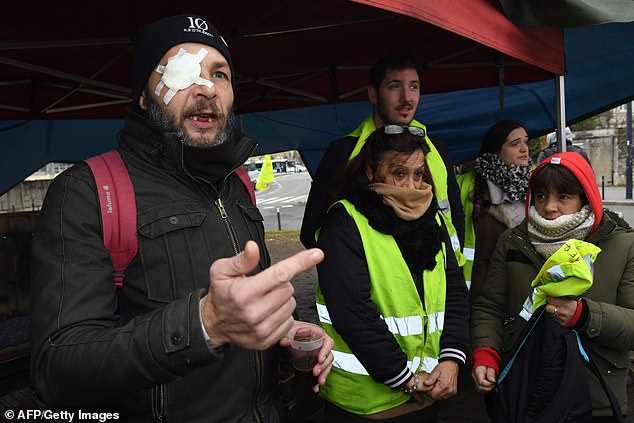 The rubber pellets are 40mm in diameter and are fired by ‘defensive ball launchers’ or ‘LBD40s’ at more than 300km/h. Although described as ‘non lethal’, their use is controversial and France’s human rights chief Jacques Toubon has called for a ban.

But the country’s Council of State ruled on Friday that security forces have a right to use the controversial high-velocity rubber bullets for crowd control.

Benjamin Cauchy, a yellow vest spokesman from southern France who came to the Paris protests, called that a ‘regrettable decision.’

The weapon ‘is extremely harmful, imprecise and in the end is causing more sorrow than security,’ he told BFM television. 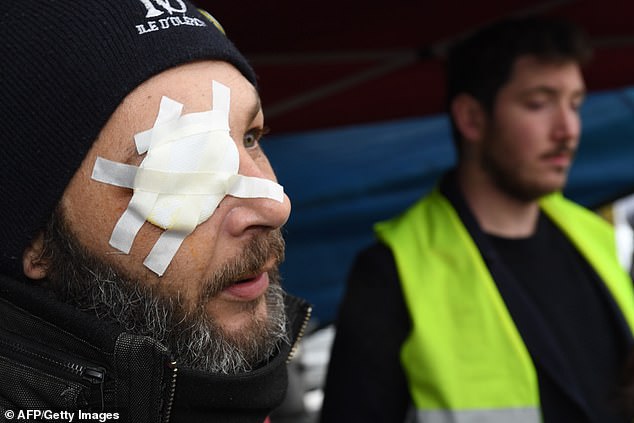 Around 2,000 ‘Yellow Vest’ activists have been injured in protests since the movement began on November 17. Of those there are at least four serious eye injuries 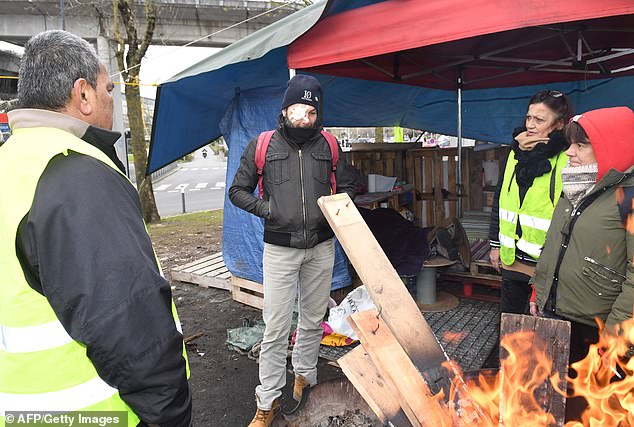 The Council of State noted the frequency of violence and property destruction at the protests and concluded the devices are not a ‘grave attack’ on the freedom to demonstrate and are not inhumane treatment.

Interior Minister Christophe Castaner tweeted Friday that ‘if the law was respected, there would be no injured.’

But Mr Michaud argues shooting protesters in the face amounts to excessive and unnecessary force. He must now wear an eye patch and says he is unable to work as a horticulturalist in case dust gets into the wound.

‘If the police blamed me for something, all they had to do was shoot me in the legs to immobilise me and stop me,’ Euro News quoted him as saying. Mr Michaud also said his arms were the air when he was shot. 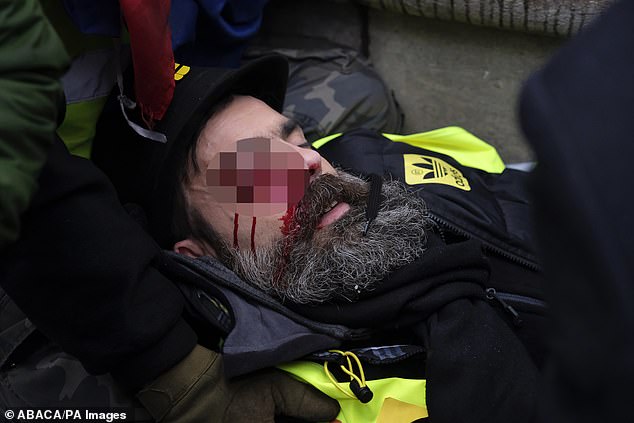 The former paratrooper said 20 years ago he had marched down the Champs-Elysées on Bastille Day with pride, but now he thinks of it as the place is where ‘LBD shots hurt innocent people every Saturday,’.

‘I don’t know how I will pay for my reconstructive surgeries and I’m no longer proud of France,’ he said. 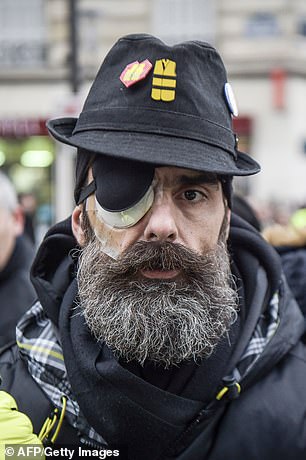 Jerome Rodrigues, one of the leading figures of the movement, called on protesters to peacefully demonstrate against police violence toward participants over the last three months in France

Mr. Michaud now demonstrates against police violence as well as the economic factors, in particular fuel tax hikes, that were the catalyst for the original protests.

The government says around 2,000 activists have been injured in protests since the ‘Yellow Vest’ movement began on November 17, including at least four serious eye injuries.

Separately, 10 people have died in traffic accidents related to yellow vest actions and 1,000 law enforcement officers have been hurt.

Jerome Rodrigues, a prominent member of the movement who suffered an eye injury last week, was widely applauded by the crowd Saturday.

A French police investigation is still trying to determine how Rodrigues was injured.

Video images show him collapsed on the ground last Saturday near the Bastille monument, where protesters throwing projectiles clashed with police.

Rodrigues claimed he was hit by a rubber bullet during clashes at the Bastille square on January 26, but the French junior interior minister said there was ‘no indication’ that his facial injuries were caused by a rubber projectile. Rodrigues said he was also hit in the foot by a stun grenade. 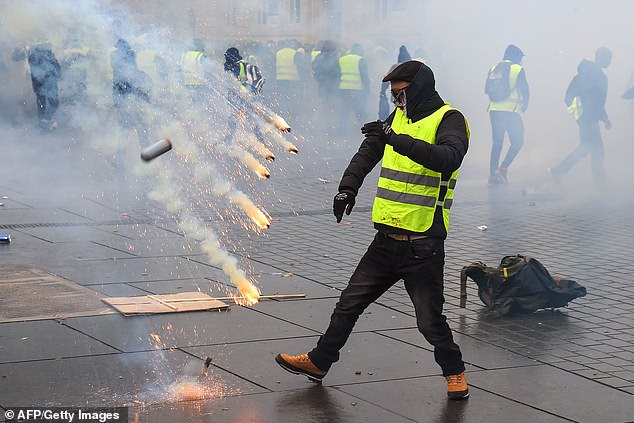 Protestors clash with riot police on December 8, 2018 in Bordeaux, southwestern France on the day that Jean-Marc Michaud was struck by a rubber bullet and consequently lost his right eye

Franck Dideron, 20, said he was protesting peacefully, speaking on the phone to his mother, when his eye was injured by a rubber bullet fired by police during a Dec. 1 protest near the Arc de Triomphe in Paris.

‘The policeman shot me voluntarily. And I was just turning around – how was that violent behavior? How was I dangerous for him?’ he asked.

‘Today, I would like to see this policeman come and stand in front of me, look me in the eye and tell me why he shot me.’

The ‘Yellow Vest’ protesters were back on the streets Saturday to keep up the pressure on President Emmanuel Macron’s government.

Multiple protests in Paris and other cities denounced Macron’s economic policies, which they view as favoring the rich, for the 12th straight weekend of demonstrations. Most were peaceful. 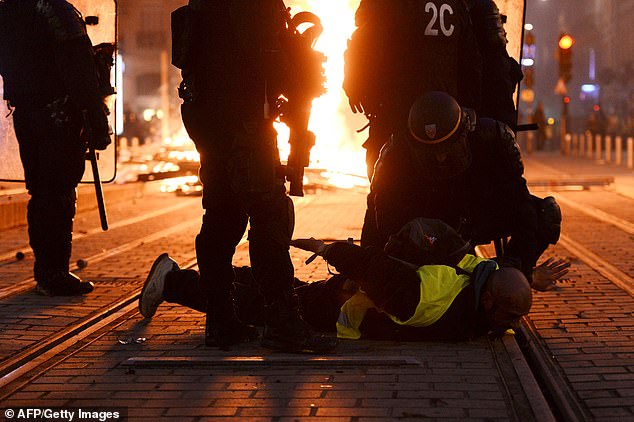 Riot police officers detain a ‘Yellow Vest’ activist on December 8, 2018 in Bordeaux. Renewed demonstrations took place last Saturday to protest the the number of protesters who have been injured in clashes with police since November

Several competing groups of yellow vests are getting ready to present candidates for the European Parliament election in May, while other figures insist the movement must remain non-political.

Around 69,000 people nationwide took part in French protests last week, down from more than 80,000 the previous two weekends, according to the French Interior Ministry.

The yellow vests movement began in November and was named after the fluorescent safety vests that French motorists must carry.