A yob drove his car towards a rival during a horror seafront brawl before smashing it into a parked motor.

The extreme scenes happened on Southend-on-Sea front in Essex last night and was captured on shock video by a bystander.

A black Fiesta could be seen driving on to the grass near the beach where a crowd of people gathered.

It then sped along as one man tried to get out of the way before it smashed into the white version of the same motor.

Fighting thugs then lobbed objects at and kicked the lighter Ford Fiesta as the ugly scenes continued.

Cops were called to reports of the large scale fight in Southend-on-Sea, Essex last night/on Tuesday. 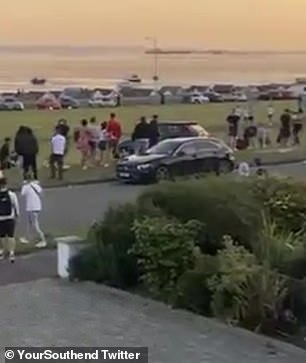 ‘It was frightening. About 30 minutes after, another fight happened on the seafront too.’ 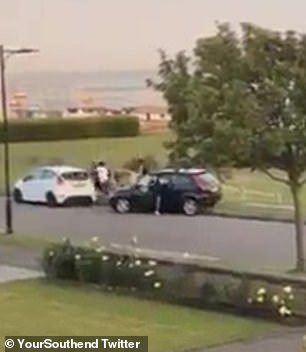 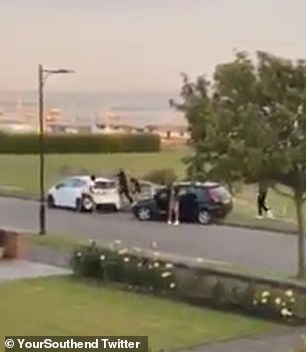 Later in the incident the black Fiesta sped towards a white car, which was then attacked by thugs

Irene Harrison added: ‘Why spoil such a lovely place.’

Kay Radley said: ‘Imagine what it’s going to be like when the pubs open soon…. what a joy!’