You CAN beat the credit card crunch: We’ve investigated almost 150 of the best deals

In the wrong hands, they can be dangerously expensive and lead to snowballing debts.

But if used smartly, credit cards can still be an effective spending tool and even earn you money.

Yet shoppers now have around 166 to choose from. Each charge different interest rates, fees for spending overseas and offer a host of perks.

Choose wisely: Shoppers now have around 166 credit cards to choose from. Each charges different interest rates, fees for spending overseas and offer a host of perks

So how can you beat the credit card traps and get yourself a good deal?

Bank of England figures show UK households now owe £72.5billion on credit cards — up from £70.1billion the year before.

The group looked at 144 cards and considered a number of factors including interest rates, overseas withdrawal fees and the rewards on offer.

Getting paid to use your credit card sounds like a no-brainer. But watch out for cashback cards with high interest rates that could wipe out any earnings.

American Express cards score highly for cashback, with three earning five-stars. To achieve that cards must earn customers who spend the national average of £572.60 a week at least £165 cashback in year one and £145 in the second. 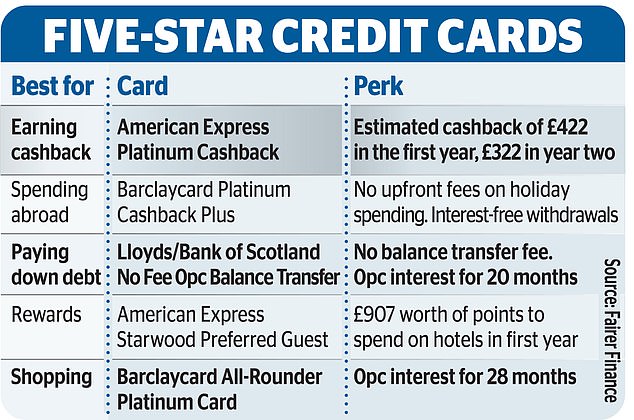 They must also have low charges. For example they cannot charge a cash advance fee, which applies to cash withdrawals, higher than 3 per cent.

With the Amex Platinum Cashback Card, customers can earn 5 per cent for the first three months up to £125.

Fairer Finance estimates the average customer with an Amex Platinum Cashback card could earn around £422 in year one, after the fee. In year two you could earn £322. But, not all stores accept American Express.

There are no other five-star cards that offer cashback — the rest of the top deals offer rewards or points.

NatWest and RBS Rewards pay customers reward points which can be converted into cash.

Most credit cards charge extra fees if you use them abroad.

The average holidaymaker pays £100 in charges while overseas, according to digital bank Tandem.

With most debit cards you pay a non-sterling transaction fee for payments not made in pounds. 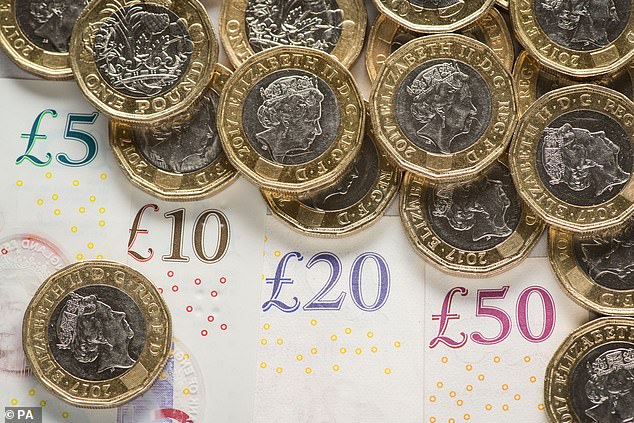 This is around 3 per cent of transactions. Some providers also slap on a non-sterling purchase fee.

It applies to anything you buy and is usually around £1.25. You are also likely to be charged for cash withdrawals.

According to Fairer Finance, Barclaycard’s Platinum Cashback Plus card is the only five-star offer for foreign use because unlike most other cards, it does not charge interest on cash withdrawals until your balance is due.

You will also earn 0.5 per cent cashback on purchases abroad or at home for the first three months.

Best for: paying down debt

With a typical credit card charging 19.9 per cent to 21.9 per cent interest, 0 per cent balance transfer deals are a good way to pay down debt cheaply.

It means every penny you pay goes towards clearing what you owe rather than being swallowed up by hefty interest charges.

The number of interest-free balance transfer deals on offer have plummeted in recent years — down from 125 in 2017 to just 84, according to Moneyfacts.

Offers are also getting shorter, with the longest deal now just 28 months compared to 43 months two years ago.

However, Fairer Finance has still given five cards five stars.

To earn five stars the card cannot charge customers a balance transfer fee. Just 12 out of a possible 74 cards are fee-free. 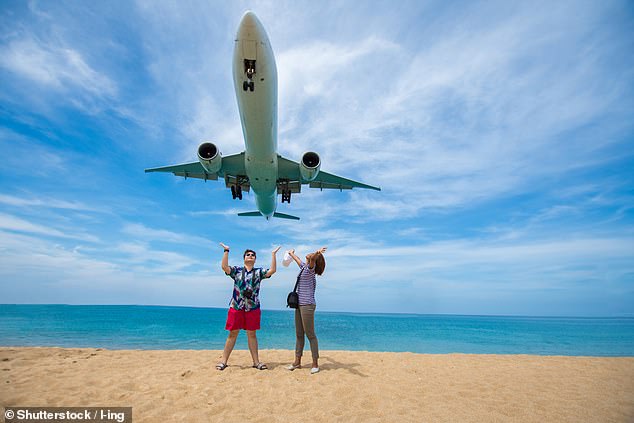 The average holidaymaker pays £100 in charges while overseas, according to bank, Tandem

They must also offer at least 12 months interest-free, give customers at least two months from when they get the card to move over debt, and charge an interest rate of no more than 19.9 per cent after the 0 per cent offer expires.

The longest five-star offer is Lloyds and Bank of Scotland’s No Fee 0 per cent Balance Transfer card which gives you 20 months to pay off your debt. Once the offer expires you will pay an average interest rate of 19.9 per cent.

There are a number of 28-month balance transfer cards, including those from Barclaycard and Virgin Money, but these only get a three- star rating because they charge a fee of up to 2 per cent to move debt.

Best for: points or airmiles

Instead of cashback, some credit cards offer airmiles or points you can trade for discounts at shops, hotels and restaurants.

To earn five stars cards must offer at least £300 worth of points in year one, after fees, and £200 in year two.

With Amex’s five-star Nectar credit card new customers will earn 20,000 bonus points if they spend £2,000 in the first three months.

You then get two points for every £1 you spend. The card is free for the first year, after which there is a £25 annual fee.

Fairer Finance says the average shopper with Amex’s five-star Nectar credit card could earn £429.60 worth of points in year one.

Alternatively, you could earn almost £907 of points in the first year with Amex’s Starwood Preferred Guest credit card.

HSBC’s Premier World Elite and a number of Marks & Spencer Reward cards are also rated five stars. With HSBC, every two points you earn are the equivalent to one Frequent Flyer mile. If you spent £9,000, for example, you could fly to Paris.

Some credit cards let you spend without charging interest.

There are seven 0 per cent purchase cards with five stars. The longest offer is with Barlcaycard’s All-Rounder Platinum card, which gives you 28 months interest-free.

After that, you will be charged up to 19.9 per cent. Alternatively, you may prefer a card with a long-term low interest rate. Halifax, Bank of Scotland and Lloyds all offer cards charging 6.4 per cent.