A young couple who spent 13 terrifying hours trapped overnight in an ocean cave after being swept into the freezing waters by a freak wave admit they are lucky to be alive.

A coastal walk almost turned to tragedy when Jak Teerman, 24, and his girlfriend Shanaye Hunter, 21, had taken an afternoon drive to Catherine Hill Bay in NSW’s Lake Macquarie region on Tuesday at 1.30pm.

The pair wound up battling in the pitch black for hours to stay safe, constantly being pushed off rocks by unrelenting waves before desperately pulling themselves back up time and time again.

Their ordeal began when Ms Hunter was standing on the edge of the cliff taking a Snapchat of the water, a post that would alter their lives.

Moments later, she was suddenly swept off her feet and plummeted into the rough seas between the cliff and rocks before Mr Teerman jumped into the water after her.

Jak Teerman, 24, (left) and new girlfriend Shanaye Hunter (right) are lucky to be alive after they spent 13 hours trapped in an ocean cave

‘It was just an instant reaction, I didn’t really think about it I just wanted to make sure she was okay,’ Mr Teerman told Daily Mail Australia.

‘In the moment I just had to make sure she was going to be okay, so I just did what felt right.’

The couple, who are newly dating, spent 20 minutes in rough seas being pummeled into the cliffs before they eventually scrambled onto rocks, where they spent the next 13 hours before being rescued by fire crews in a delicate operation that didn’t end until 3am.

They continued to be smashed by waves as they clung to rocks in the cave in waist-lengths waters which washed their car keys and phones into the surf – and at times their own bodies before they scrambled back up.

‘It was definitely a bit rough at times, we didn’t have much to hang onto when it was high tide and even during the times we would get washed off the rocks I had a strong feeling we would get out of it okay,’ Mr Teerman said.

‘It was an ordeal to hold on and climb back in each time, but we did.’

‘I just tried to stay calm, panicking wouldn’t of helped the situation at all. The whole time I had a feeling we would get out safely but there was definitely some questionable moments.’ 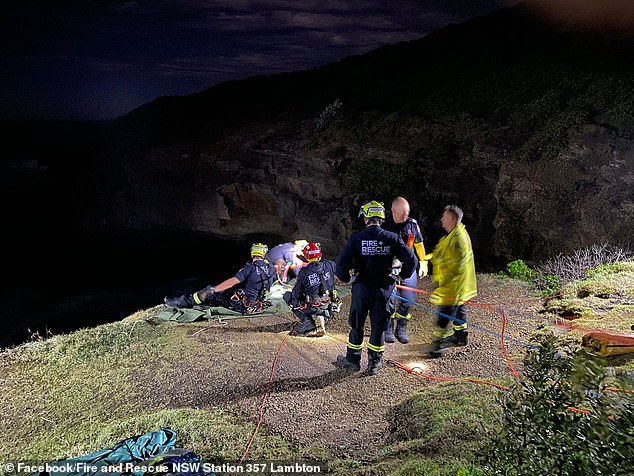 Jak Teerman paid tribute to the emergency services who rescued them, including the ‘unbelievable’ firefighters (pictured)

Concerned friends and family thought something was wrong when they hadn’t heard from either of them by 8pm – and soon realised the last contact had been a social media post on a coastal walk.

‘It’s not very long, and they hadn’t been on social media or in contact with anyone since 2pm,’ Mr Teerman’s sister Amy Thunig told the Sydney Morning Herald.

‘They [friends of the couple] raised the alarm at 8pm. By 10pm we knew something was wrong.’

‘We’re very grateful to have such a good friend that we do in Ashley, she’s the real MVP in all of this. She got the word out that something was out of the ordinary and lead to us getting rescued,’ Mr Teerman said.

After the alarm was raised, the couple’s parents drove to the spot and found their abandoned car and alerted emergency services as they searched for the pair in the dark.

The couple were winched to safety early Wednesday morning by fire crews in a delicate operation and were treated at the scene by the paramedics for minor cuts and scratches. 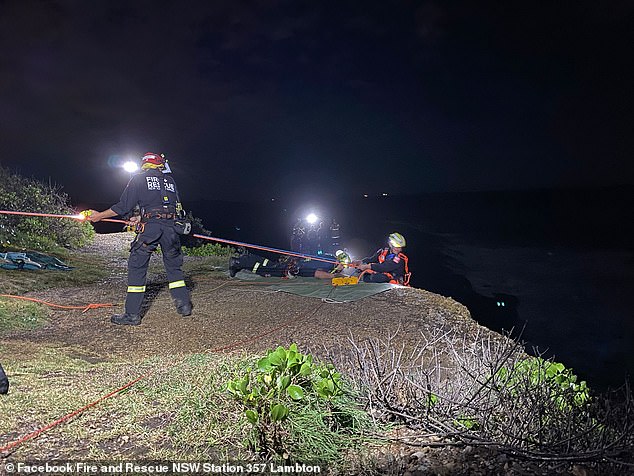 ‘Got a few aches and pains but just relieved that we’re both okay,’ Mr Teerman said.

The couple learned a valuable lesson from their harrowing ordeal.

‘Hey guys, if your friend, family or loved one gets swept off the rocks into some pretty sketchy water, don’t be a hero and jump in after them,’ Mr Teerman posted on Facebook on Wednesday.

‘Would advise you to call the cops before you jump in, I didn’t know though, I just didn’t have it in me to make the call and baddabingbaddaboom, stuck in a cave for 13 hours.’

He told Daily Mail Australia: ‘Maybe next time I’d try and call emergency services first then jump but I think that’s easier to say in hindsight.’ 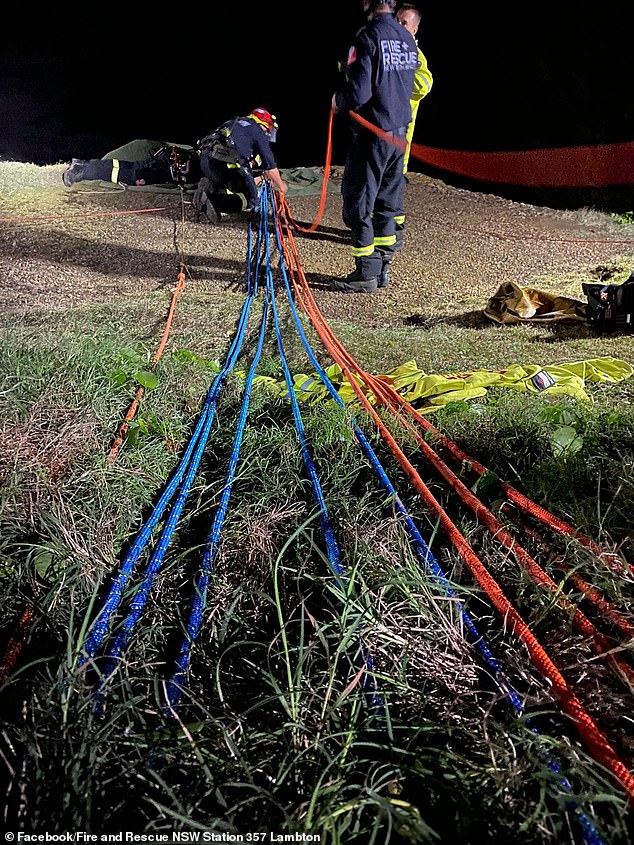 Fire and Rescue crews had to use ropes to send a firefighter down the 20m edge in an operation that began at 11.30pm and ended at 3am – 13 hours after the couple went into the water

It took five Fire and Rescue NSW crews four hours to rescue the couple, where firefighters had to a navigate a one-kilometre rocky path to get into the cliff.

‘Crews worked through the dark and cold to establish a rope system to send a firefighter down a sheer 20m drop off ledge onto crashing waves and rocks then making his way inside the cave to locate the two trapped people,’ Lambton Fire Station posted on its Facebook page

‘One at a time Fire and Rescue NSW crews physically hauled the rescue firefighter and the casualties to the top of the cliff.’

Ms Thunig said the family is proud of her brother’s efforts to save his girlfriend and remain safe during the terrifying ordeal.

‘It sounds like he saved their lives several times over,’ she said.

‘They were waist-deep in water for a significant period of time. They were just in T-shirts and shorts and had no intention of getting wet.’ 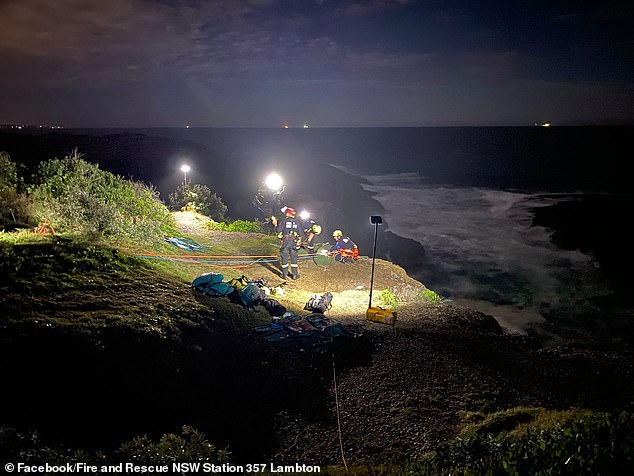