Michael Romeo was enjoying a family holiday in Italy, 18 months ago feeling healthy and planning out a future with his wife and young daughter.

The 25-year-old did suffer some discomfort on the holiday, which he dismissed as ‘mild indigestion’.

He decided to get the symptoms checked out when he returned home and received devastating news – he had stage two oesophageal cancer.

‘When I was overseas I could feel something was different and I had some mild indigestion but no other symptoms – I thought nothing was wrong,’ Michael told FEMAIL.

He described the feeling of being diagnosed as ‘surreal’ and ‘horrible’, and his ‘biggest concern’ of leaving his family behind in financial debt remains.

At the age of 35, Michael Romeo’s life radically changed after being diagnosed with stage two oesophageal cancer on January 23, 2019

Within a week of being diagnosed, Michael started his first round of chemotherapy which lasted for eight weeks and was told he had a 50 per cent chance of surviving.

‘I developed a block clot in my arm from the needle line of the chemotherapy towards the end, then a few months later I had my first surgery on May 1 (2019) to remove half of my oesophagus and half of my stomach,’ he said.

But despite the treatment, Michael received a devastating update from his doctor a month later – the cancer had spread to his liver, stomach and neck and he had between six and 12 months to live.

‘Since the cancer had spread there was nothing doctors could do and they wouldn’t operate,’ he explained.

Now he is nearing the end of that 12-month prognosis, Michael has reflected on how things could have worked out differently.

‘My biggest regret is not prioritising my health sooner which added a burden to the whole situation – it really hits home and is concerning for my family.’

From the beginning Michael and his wife spoke about the ‘worst case scenario’ and discussed what needed to be done if he were to lose his life.

‘While I wasn’t happy with what doctors told me, I had to make sense of the situation and enjoy the rest of the time I have left with my family – however long that may be,’ he said. 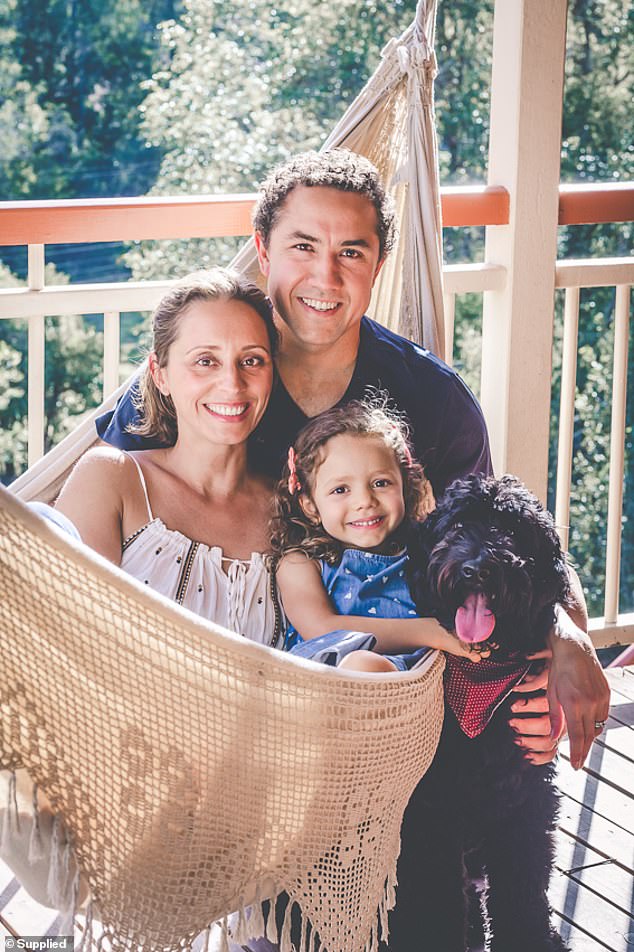 Michael, from Queensland, Australia, lived a healthy lifestyle with his wife and four-year-old daughter, but said he ‘never imagined’ this would ever happen to him and felt ‘arrogant’ for not prioritising his health sooner 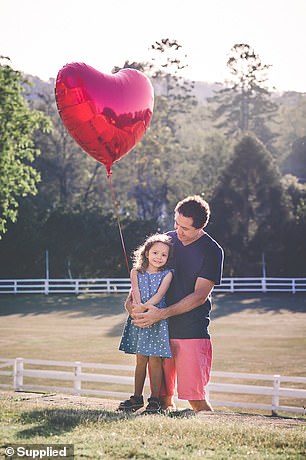 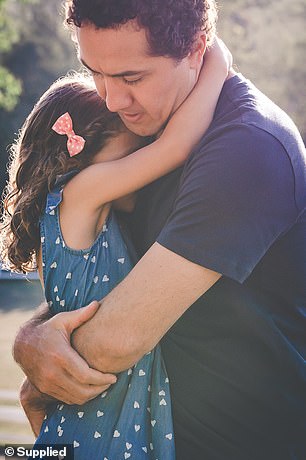 Within a week of being diagnosed, Michael started his first round of chemotherapy which lasted for eight weeks and was told he had a 50 per cent chance of surviving. But despite the treatment the cancer became terminal and spread to his stomach, liver and neck

Michael is still alive, taking a variety of medications and is doing his ‘own research to educate himself’ as conventional treatments ceased to be effective in combating the cancers.

‘The best thing I can do at this stage is research what I can do to prevent the cancers from growing or spreading anywhere else,’ he said.

If there is a silver lining for Michael, it is that he knew his time was short so he placed great importance on appreciating the precious ‘now moments’ in life – particularly the time spent with his daughter.

‘Before the cancer I was always a planner, I was always thinking ahead, planning for the next holiday or what my wife and I were going to do in ten years time,’ he said.

‘This situation has been a real eye-opener and has taught me to live in the present moment and not in the future.’

Michael is scheduled to have another body scan on June 10 – close to a year on from when the cancer was deemed terminal – to see how the cancer had spread, and get an update on how much time he has left.

Michael has also been very open about the cancer with his four-year-old daughter and said being upfront has made it easier for her to process.

Without the diagnosis Michael also wouldn’t have made any changes to his lifestyle and wouldn’t have changed his attitude towards finances, which he now realises is significant.

The diagnosis has also changed Michael’s perception towards money, allowing him to realise how he can spend it wisely to ease financial stress. 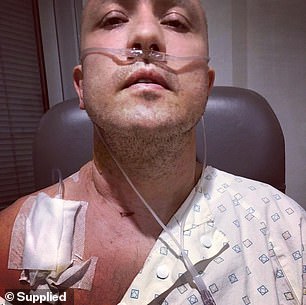 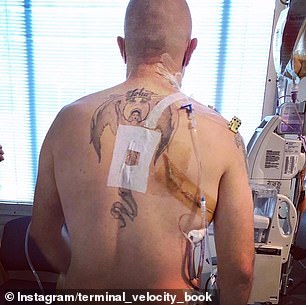 Michael is still alive, is on a variety of medication and is doing his ‘own research to educate himself’ as conventional treatments ceased to combat against the cancers

‘A crucial part of this journey has been acceptance because if you fight against it, it means you’re only fighting yourself and not helping the situation.’

Michael passed on his hard-won wisdom to others receiving a terminal prognosis: appreciate the ‘now’, focus on what you can control and avoid asking  questions such as ‘why is this happening to me?’ or ‘what have I done to deserve this?’ 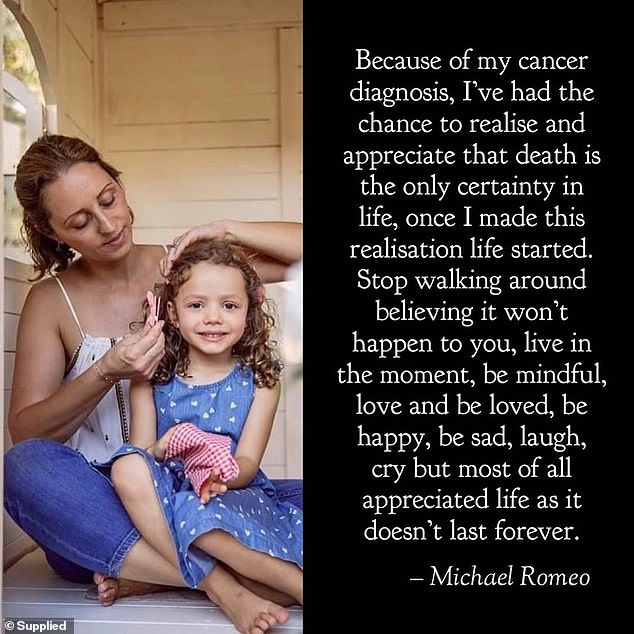 • Get wealth protection and understand your levels of insurances

• Unnecessary Consumption, knowing the difference between good and bad debt. Buying things we don’t really need fuels the need to work harder and longer, and for bad or unnecessary debt

He has passed on the advice in a book titled Terminal Velocity, intended to help others change their attitudes towards health, finances and life. 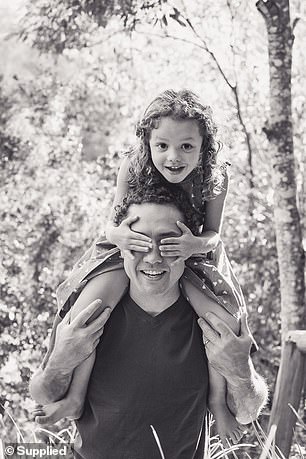 After everything he has learnt and experienced, Michael has written a new book titled Terminal Velocity

The book started as an autobiography for his wife and daughter, but turned into something more when Michael successfully implemented a banking strategy known as ‘Velocity Banking’ to pay off his mortgage repayments faster.

‘By making changes to our attitude towards money, we will see that there are ways to make our money work for us – and by doing so we are able to work less hours, have more time with the family, be grateful with what we have and make better lifestyle choices,’ he said.

‘Death is the only certainty in life! I don’t want people to wait until they are diagnosed with a terminal illness before they make positive changes to their lives.

‘If this book can help motivate others in some aspect of their lives this will all be worthwhile.’

Michael hopes Terminal Velocity will not only change the lives of those who read it, but most importantly, become something for his family to remember him by, and to assist his wife and daughter financially.

Terminal Velocity is available to purchase through leading retailers including The Book Depository, Booktopia, Amazon and selected book stores nationally.