The brand new Bridge Theatre, right by Tower Bridge, is a triumph of a building. There’s no thick carpet or chandeliers. Just a big, bright auditorium with gunmetal seating tiers.

Women are appallingly served by all the old London theatres. This one has a dozen cubicles in the loos so the interval queue should be quick. There’s a great long bar and a foyer the size of a football pitch. 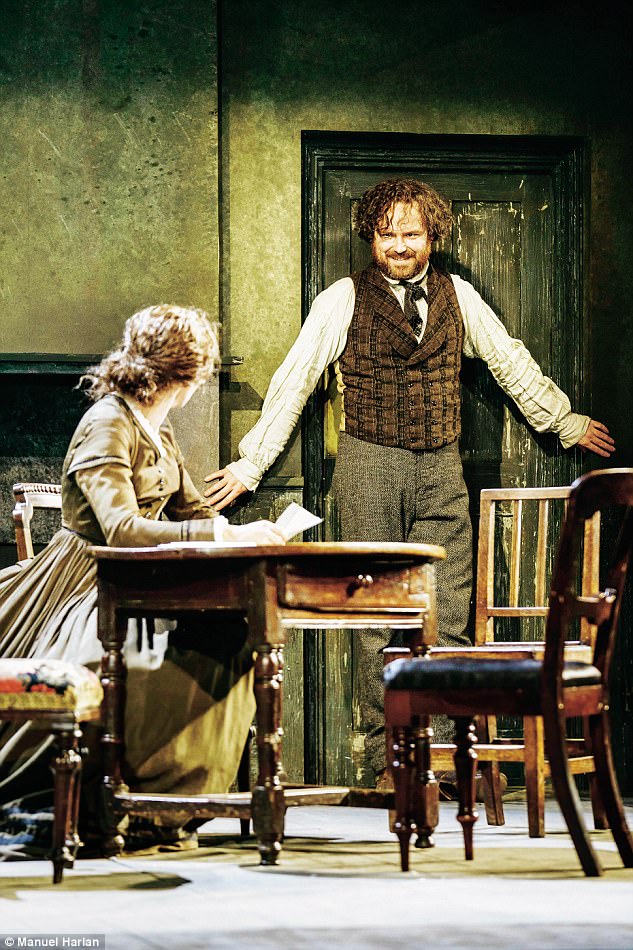 Rory Kinnear is the frantic, fidgety, bearded young philosopher who spends a lot of time hiding in the cupboard from the peelers, the bailiffs and his long-suffering wife (Nancy Carroll)

As the resident London Theatre Company doesn’t take a penny from the taxpayer, it has no need to kowtow to the politically correct demands of the Arts Council. It can do what it likes.

The theatre is the brainchild of Nicholas Hytner, the former National Theatre boss, who also directs this opening show – a farce about Marx that only half sparks.

Co-writers Richard Bean (author of One Man, Two Guvnors) and Clive Coleman claim the events depicted are all pretty much true. The action is set in 1850 in Soho, where Karl and his young family lived when he was a struggling refugee. 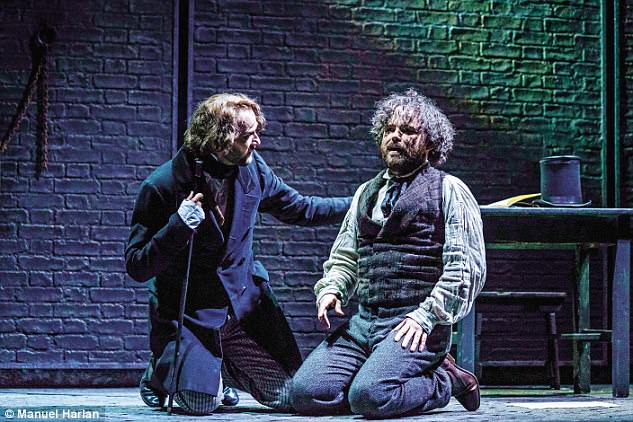 A restless boozer with a sharp tongue and boils on his bottom, Karl pawns his wife’s silver, goes on epic benders and gets the maid up the duff.

Rory Kinnear is the frantic, fidgety, bearded young philosopher who spends a lot of time hiding in the cupboard from the peelers, the bailiffs and his long-suffering wife (Nancy Carroll).

The well-heeled, randy Friedrich Engels (Oliver Chris) is Marx’s mucker, sponsor and co-author of the Communist Manifesto. They even perform at the piano as a double-act, like an anti-capitalist Chas and Dave.

After moving here in 1849, Marx spent the rest of his life in London. He died in 1883, aged 64, and is buried (near George Eliot) in Highgate Cemetery.

The design has the same chimney-dotted skyline as Oliver! and the set rotates in sympathy with the revolution that’s awaited by Marx and his comical band of revolutionary exiles – a Dad’s Army-style group of dialectical materialists.

But occasional, passionately serious speeches about the starving classes mix uneasily with the door-slamming, no-joke-too-low tone of the piece. The only scene that made me laugh out loud was the mass punch-up in the British Library (where Marx worked) with Charles Darwin as a bystander.

Absolutely full marks for the theatre, but lower Marx for the show.

The Lady From The Sea

If you like your Scandi theatre noir-ish, you might not warm to this updated version of Ibsen’s 1888 play. Rather than the brooding, lowering landscape of Norway, it has been transplanted to a Caribbean island in the Fifties.

The nearby fjord becomes a lagoon, and a yacht owned by a Hollywood star sails into port as carnival drums begin throbbing in the background.

This setting is not completely out of whack in Elinor Cook’s adaptation. It’s still a small community, with the social circumspection of the time, even if the eponymous Lady, Ellida, is more at home in a swimming costume and sarong than encased in the confining dresses and corsets of the 19th century. 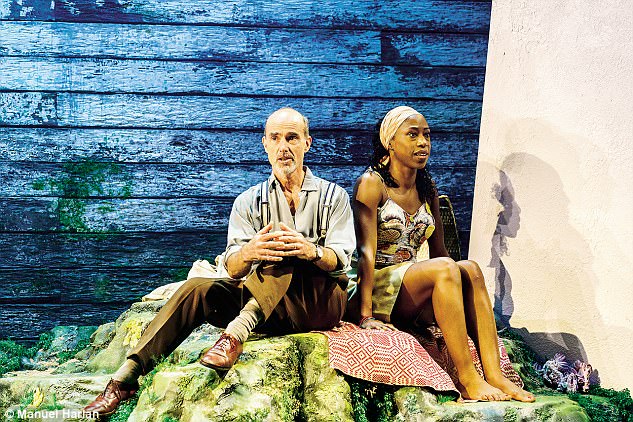 Director Kwame Kwei-Armah doesn’t quite balance emotional tone and sultry setting, and there are ripples rather than waves, but this is a fresh and pacy production

But she is just as trapped – caught between the devil of a murderous sailor she consorted with at the age of 16, security with the decent but distracted local doctor Wangel (a softly spoken Finbar Lynch, left with Nikki Amuka-Bird) and the deep blue sea she longs for.

When the ghost from her past reappears, she has a stark choice.

Amuka-Bird’s brittle Ellida is pragmatic. ‘I want to live all the life it is possible to live’ is a heartfelt plea in what is mostly a rather cool reading.

Director Kwame Kwei-Armah doesn’t quite balance emotional tone and sultry setting, and there are ripples rather than waves, but this is a fresh and pacy production.

If there was ever a play that echoes Amy Winehouse’s hit song about not going to rehab, this is it. It opens with a scene from The Seagull and the addict-actress Emma losing it on stage. Next she’s in a clinic, totally off her face and utterly desperate.

In a circle of chairs, a cast of ten play her co-addicts and clinical supervisors. Emma’s parents make a late but devastating appearance. 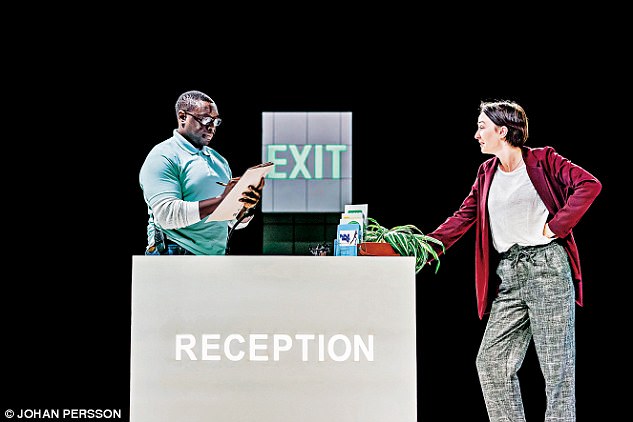 Funny, foul-mouthed and with real insight into the nature of addiction, this is a must-see

Funny, foul-mouthed and with real insight into the nature of addiction, this is a must-see. Especially for the hard-bingeing young who think theatre is dusty and irrelevant.

Witness For The Prosecution

The star of this production of Agatha Christie’s second- most famous play – The Mousetrap is still running – is the novelty venue. It’s staged in County Hall, over the river from the Houses of Parliament.

You sit in leather bench seats polished by the bottoms of generations of councillors in a marble-pillared, polygonal chamber of great splendour and pomp. It’s the perfect substitute for the Old Bailey in this 1953 courtroom drama. 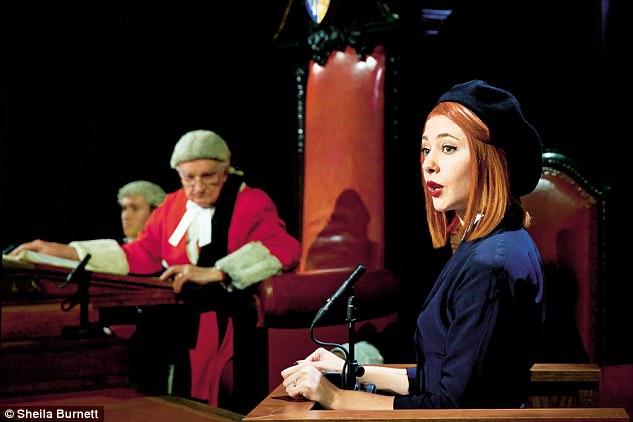 The prisoner in the dock, Leonard Vole, is accused of bumping off an old lady – with a heavy object to the skull – whom he’s befriended. The naive, working-class Vole (expertly played by Jack McMullen) faces the noose.

After all, he has her blood on his left cuff and he’s a beneficiary of her will. Worse, he also has a ‘continental’ wife (Catherine Steadman), and English juries, we learn, don’t tend to believe foreigners. 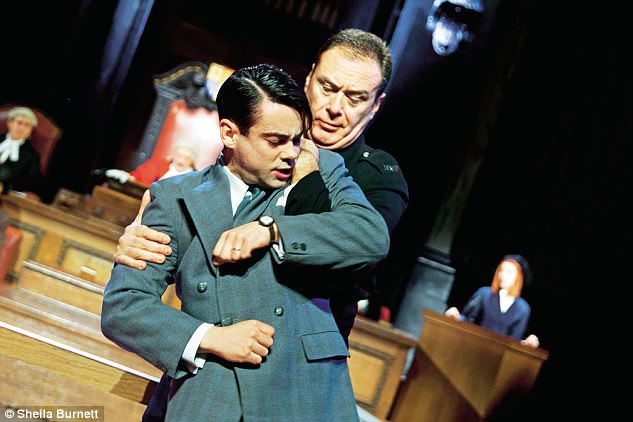 Happily, his defence is led by Sir Wilfrid Robarts QC, a seasoned maestro at getting people off. The action veers between legal chambers, the High Court, and an East End pub where Sir Wilfrid hooks up with a lady of the night who has some incriminating letters for sale.

The 1957 film starred Charles Laughton, his wife Elsa Lanchester, Tyrone Power as Leonard Vole (in his final film) and Marlene Dietrich as his wife

Lucy Bailey directs this top-notch hokum with the sound of sawing violins, court room gasps, echoing calls from the court ushers and scary lighting. It gives a fresh theatricality to the more conventional ‘I put it to you’ grandstanding of the barristers and the procedural flummery of the court.

Ticking off the witnesses is a scarlet-robed judge (a gin-dry Patrick Godfrey). The owlish prosecuting counsel, played by Philip Franks, is excellent. The only slight disappointment is David Yelland as Sir Wilfrid (Charles Laughton was wonderful in the 1957 film version), who could do with more ham and relish when on the attack.

Being by Agatha Christie, the play depends on a totally daft twist you don’t see coming. But it’s never once guilty of being boring. Verdict? A proper old-fashioned hit that really takes you to court.

Tom Kempinski’s play is about a violinist confined to a wheelchair by multiple sclerosis. It was first staged in 1980 with the writer’s then wife, Frances De La Tour.

Here, Belinda Lang has courageously taken over at short notice from the indisposed Jemma Redgrave. She plays Stephanie, the cruelly afflicted musician in therapy. 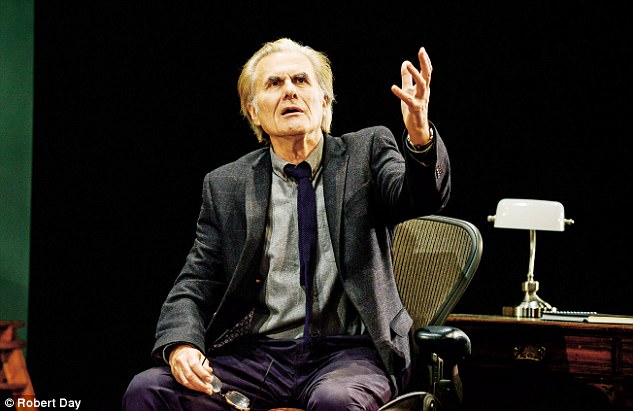 Stephanie is proud, sarcastic and disrespectful towards her largely taciturn listener. Oliver Cotton (above) plays her stereotypical German shrink

In Lang’s hastily assembled performance, there isn’t too much room for our sympathy. On the first night, with both actors unsure of their lines, it felt warmed up rather than properly revisited.