Young woman reveals what made her become a heavy vehicle mechanic

Danie Simpson, 28, says as a woman she has had to work twice as hard to find her feet in the male-dominated industry

The heartbreak of seeing too many farm animals die proved too much for Danie Simpson to continue her plans to become a vet, but when the 28-year-old  told her family she was dropping her studies, they could hardly have expected her surprising new career path.

Danie’s passion for offroading on weekends – and her cherished 4WD she calls ‘Old Boy’ – made her decision to become a heavy-vehicle mechanic a natural one for her.

But the 28-year-old’s family and friends she was going into such a male-dominated trade but her innate desire to defy expectations made her all the more determined to succeed.

‘Naturally people see a male and assume they know more about mechanical issues – even I do it myself sometimes, it’s a hard thing to get out of people’s minds,’ the Townsville woman told FEMAIL.

But Danie can’t imagine working anywhere else and says women who want to have a career in mechanics should definitely look into it.

‘It’s hard, I am not going to lie about that, you will be doubted and you will have to work harder,’ she said.

‘But I kind of like the feeling of proving people wrong, showing them I can solve their problems.’

Danie became obsessed with 4WDs after making friends with people who spent their weekends camping and going on four-wheel driving holidays.

She loved how the vehicles opened up a world of possibilities off the main track, with Fraser Island being her all-time favourite destination. 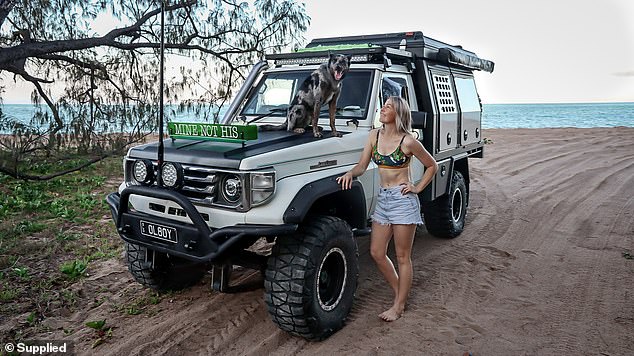 ‘Naturally people see a male and assume they know more about mechanical issues, even I do it myself sometimes, it is a hard thing to get out of people’s minds,’ she told FEMAIL 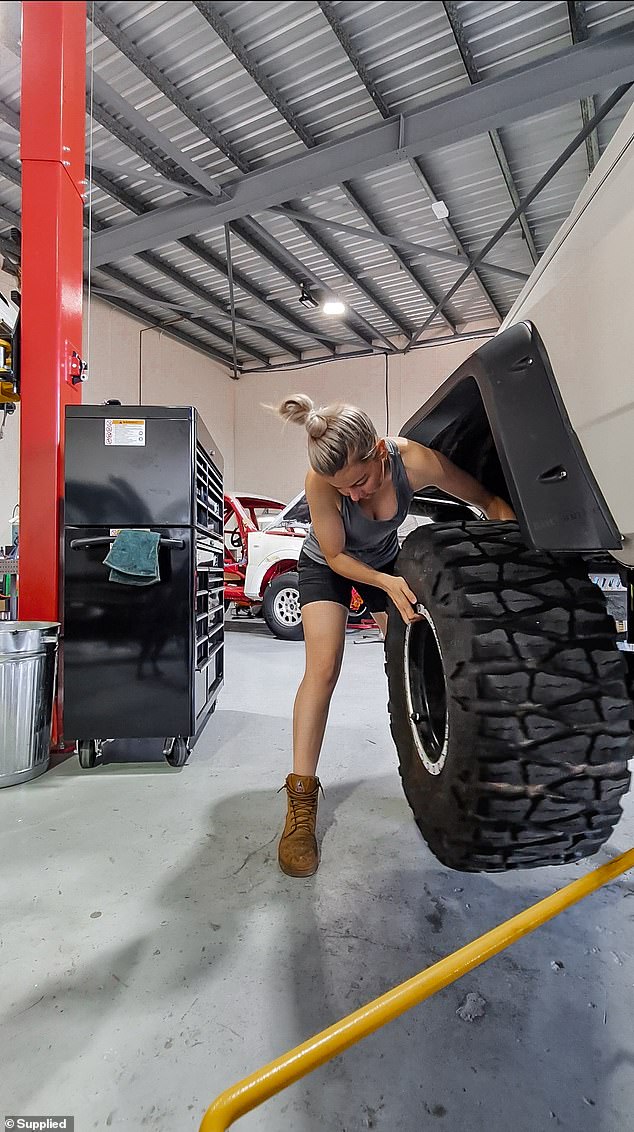 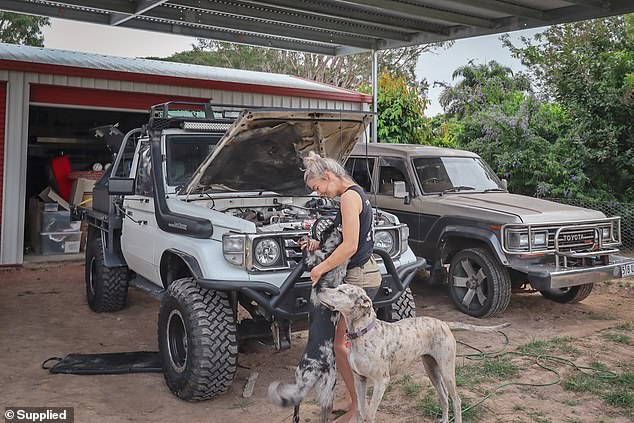 After becoming tired of being a passenger in her friends’ cars, she now has four 4WDS of her own. Her favourite ‘Old Boy’ is also affectionately known as James.

‘Even when he stops running I couldn’t get rid of him, I will hand him down to the next generation,’ she said of the 1991-model car.

The LandCruiser has been extensively modified since she bought it. One of the additions was a green sign which reads ‘Mine Not His’.

‘When I first got the car people assumed it was my boyfriend’s or dad’s,’ Danie said.

‘There are more women driving these big cars now so I probably don’t need it anymore but will keep the sign on because people recognise it,’ she said. 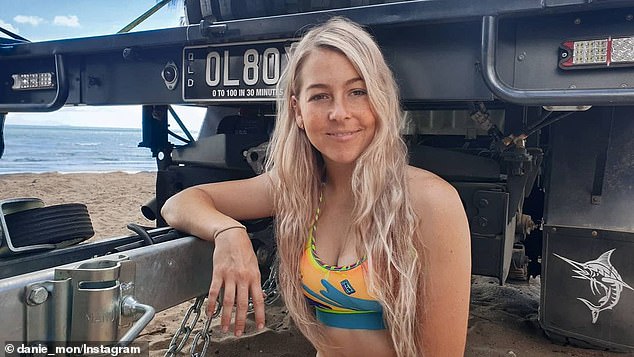 ‘Even when he stops running I couldn’t get rid of him, I will hand him down to the next generation,’ she said of the 1991-model car, both pictured 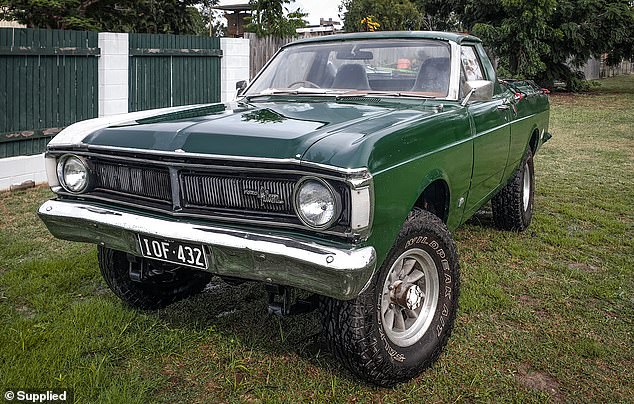 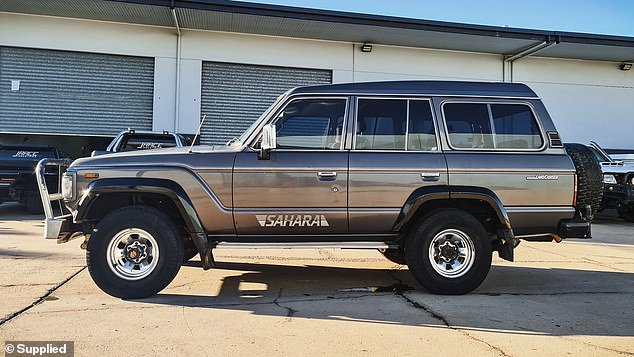 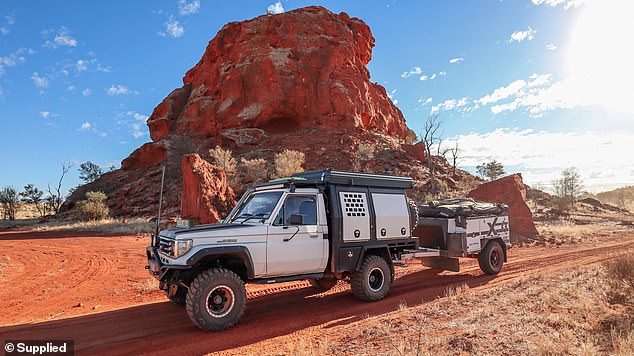 But Old Boy, her first LandCruiser is her favourite

Old Boy is very popular, in fact, the young woman’s Instagram account which focuses on her vehicles has more than 110,000 followers.

‘It is pretty crazy and I would be overwhelmed if I saw that many people in a crowd,’ she said.

Old Boy has 650,000km on the clock – Danie still thinks he has plenty of life in him and hopes to see his speedometer tick over to a million kilometres.

She has spent about $55,000 on the car in total, including purchase price, but admits if she’d had to pay for the labour she has done on the car it would be another $20,000.

‘I love that I can do it all myself, it definitely saves me a lot of money,’ she said.

Danie had almost finished her studies as a vet when she decided she couldn’t continue due to her distress at seeing too many animals die.

‘I was doing a rural placement and you can only see so many farmers cry,’ she said. 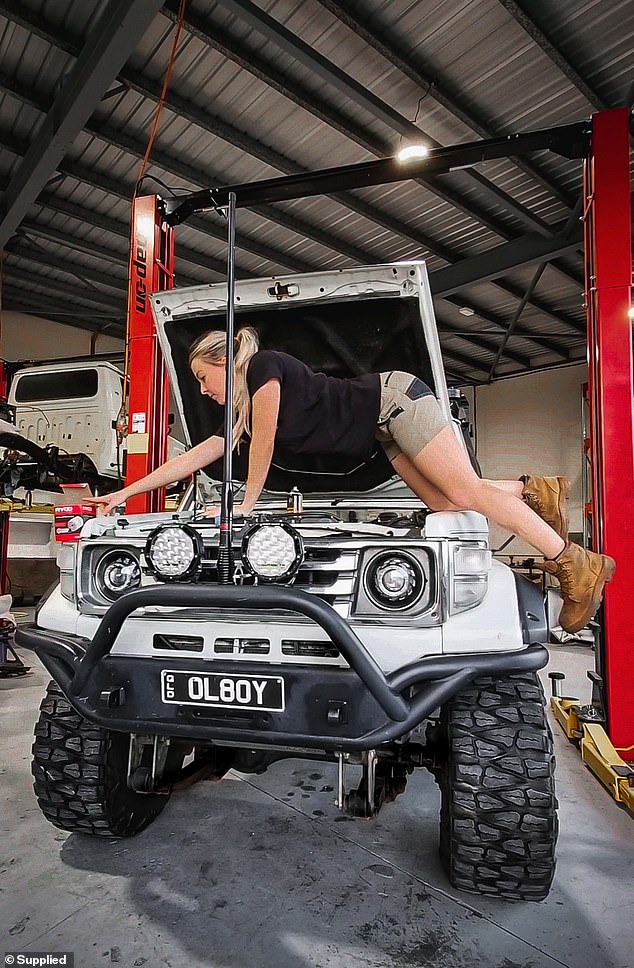 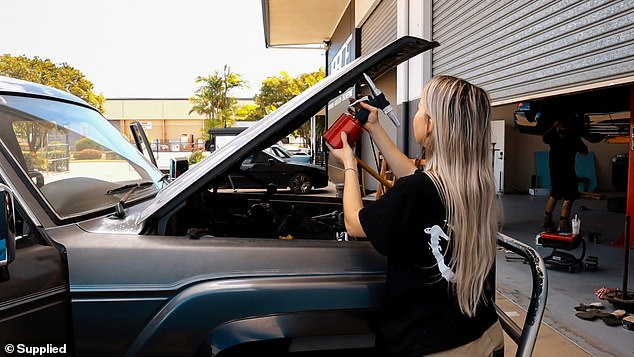 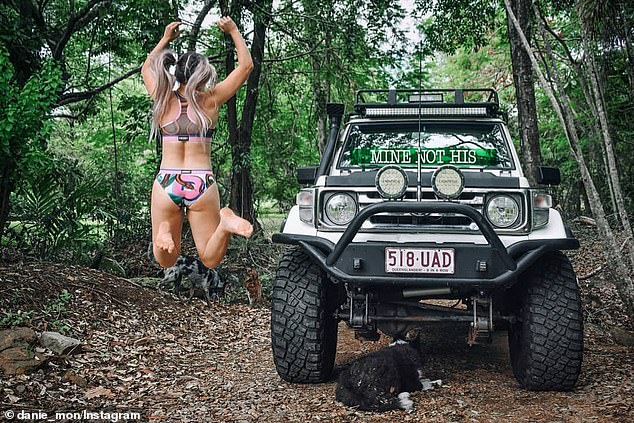 By this time she had taught herself how to work on her Old Boy, and had developed a passion for being on the tools, so a new career path seemed obvious.

Her family was shocked but supportive when she told them she was going to become a mechanic instead.

‘My family aren’t really car people, so it came out of nowhere for them, it was totally unexpected,’ Danie said.

‘Now between work and working on my own cars on the weekend it is my whole life, I love it,’ she said.

Danie is now the go-to for family and friends who have car trouble and loves that even her dad now comes to her for advice.

‘My dad called me the other week after he sent me a photo of something leaking and wondered if he should be concerned,’ she said.

‘He is handy but definitely not a mechanic.’

Danie did her heavy vehicle mechanic competencies alongside a few other women but most opt to work in the mines. 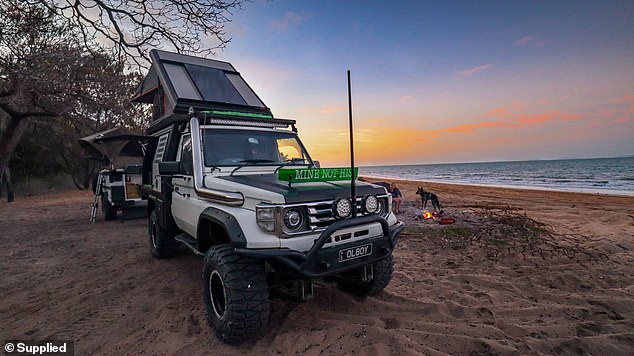 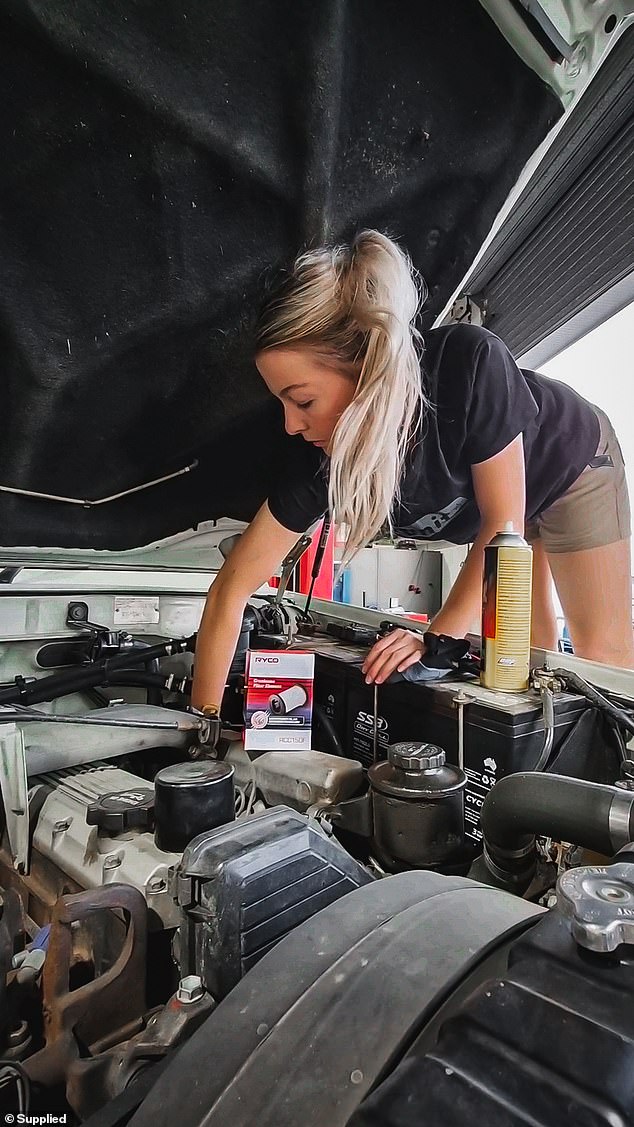 She chose to stay in town and works on everything from bobcats to trucks and other big machinery.

There is a lot of heavy lifting in the job but the tools and aids all mechanics are expected to use make it possible for Danie to do the job effectively.

‘I get asked a lot if I am physically strong enough to do the work,’ she admitted.

‘There is a tool for everything and with workplace health and safety what it is, no-one is expected to lift heavy things,’ she said.

Because of the physical nature of the job Danie keeps quite fit without the need to hit the gym.

She instead enjoys yoga when she has time.

‘At the end of every day we are worn out,’ she said of they physically demanding job.

While getting an apprenticeship was difficult Danie says it doesn’t appear to be gender based. 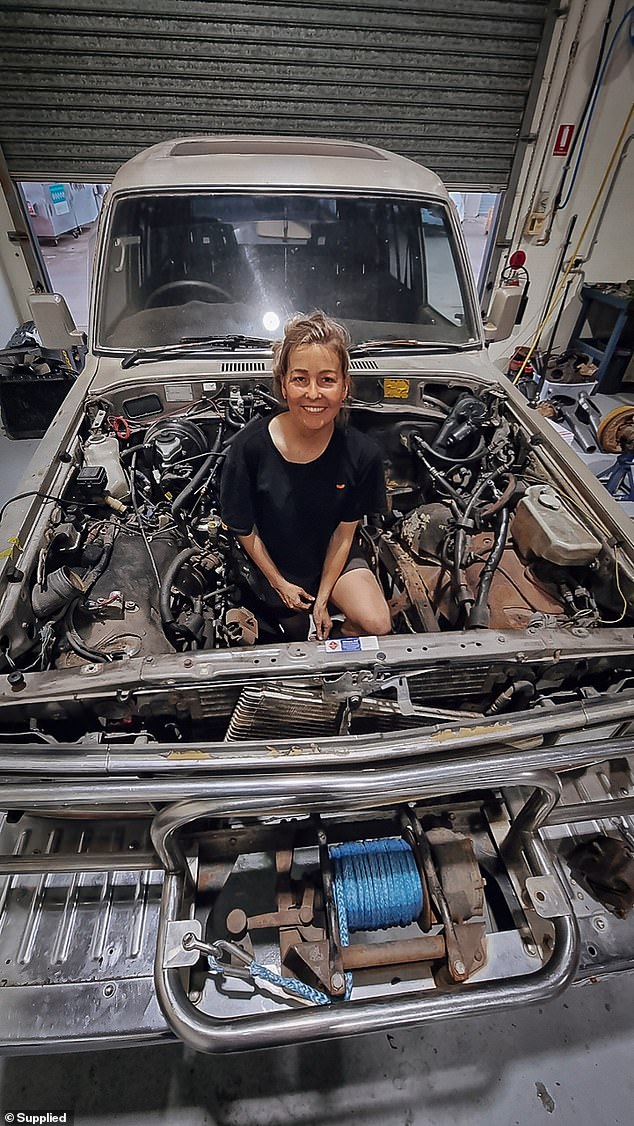 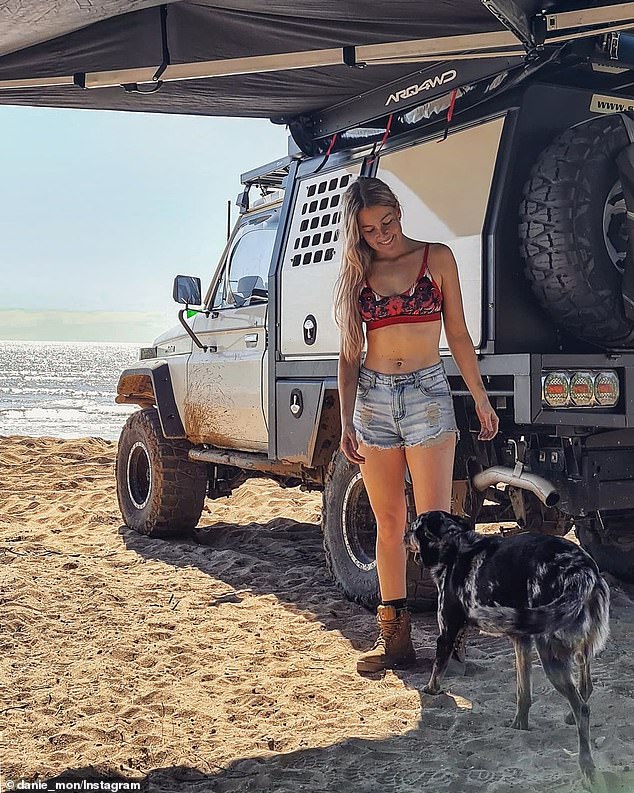 ‘I just tell people to do work experience first because a lot of garages don’t have the resources to put someone new on.

‘But if they have seen you work and you have the passion and drive they are more likely to take a chance.’

Danie plans to continue her study so she can be qualified as a light vehicle mechanic as well.