Your essential guide to the vaccine roll-out

Thousands of people across Britain have already had their initial Covid-19 jabs as NHS teams use the first 800,000 doses of the revolutionary vaccine. And with a million more soon to be here, the jab campaign is due to pick up pace fast.

HOW YOU WILL GET YOUR APPOINTMENT

DOES IT MATTER WHICH PART OF THE COUNTRY I LIVE IN?

People most at risk will be prioritised, regardless of whether they are in tier 1, 2 or 3.

But there has been an element of a ‘postcode lottery’. The addition of ten more vaccinating hospitals across England – on top of the 50 announced to begin with – was tacit admission by the NHS that certain areas, such as virus blackspots Manchester, Bradford and Medway in Kent, were not getting their due share.

Batches of the vaccine are being distributed according to the size of the local population, so that should mean everyone gets equal access to the available doses. But regional vaccination rates are bound to vary as hospitals will get through their patient lists at differing speeds.

HOW MANY PEOPLE HAVE HAD THEIR FIRST DOSE SO FAR?

‘Tens of thousands’ have had it so far, said Health Secretary Matt Hancock on Thursday – but the exact figure has not been disclosed.

DO YOU CALL ANYONE ABOUT GETTING THE JAB?

No. When it’s your turn, you will be contacted by the NHS by phone or letter offering an appointment, which will typically be a couple of days later. There have been reports about people phoning their local hospital and getting a same-day jab. This is strongly discouraged.

SHOULD YOU HAVE THE JAB IF YOU SUFFER ALLERGIES?

Dr June Raine, chief executive of the Medicines and Healthcare products Regulatory Agency, which approved the vaccine, said: ‘Anaphylaxis [a severe allergic reaction] is a known, although very rare, side effect with any vaccine.

‘Most people will not get anaphylaxis and the benefits in protecting people against Covid-19 outweigh the risks.

‘Anyone due to receive their vaccine should continue with their appointment and discuss any questions or medical history of serious allergies with the healthcare professional prior to getting the jab.’ 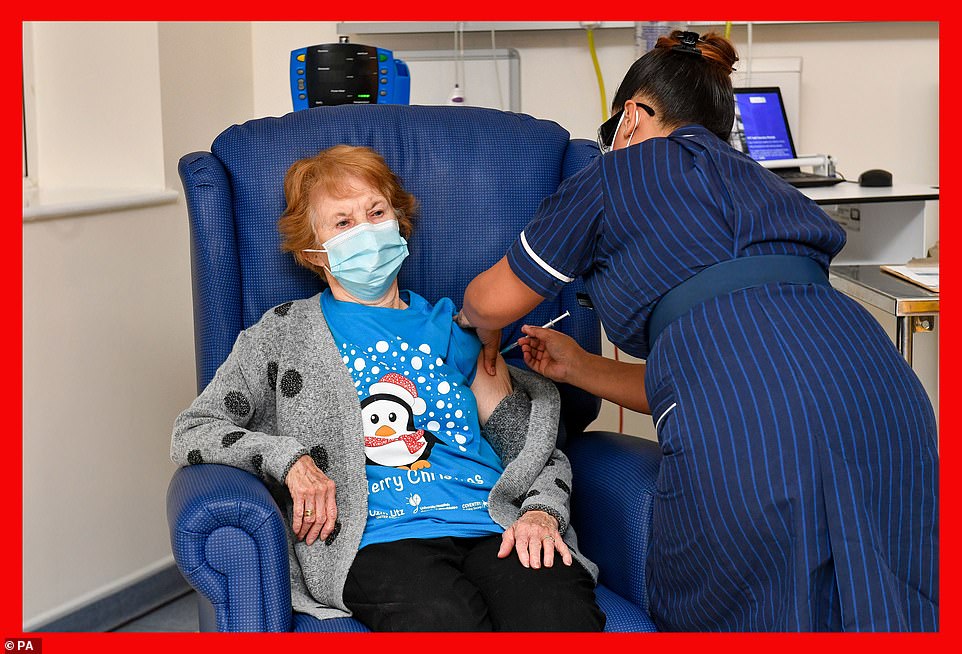 Margaret Keenan, 90, is the first patient in the United Kingdom to receive the Pfizer/BioNtech covid-19 vaccine at University Hospital, Coventry

WHAT IF YOU ARE ILL ON VACCINATION DAY?

Don’t attend the appointment but phone the NHS on the number you were given and rearrange for another day.

ONCE AT THE CLINIC, WHAT WILL HAPPEN?

Similar with any inoculation, you’ll be asked questions about your health. A first dose of the Pfizer/BioNTech vaccine will then be injected in your upper arm. You must then wait 15 minutes before leaving so staff can make sure there is no adverse reaction.

DOES THE VACCINE GIVE PROTECTION STRAIGHT AFTER THE FIRST JAB?

No. Recipients of the Pfizer/BioNTech jab begin to build immunity 12 days after the first dose – but only have full immunity a week after the second dose – ie 28 days after the first jab. You will most likely be given an appointment card with details of when to return for your second, booster dose 21 days later, though paperwork procedures vary between areas. If you can’t make the booster jab appointment, call to rearrange it.

WHAT IF YOU DECLINE THE JAB – BUT THEN CHANGE YOUR MIND?

You should phone the team that offered you the original invitation. They will be happy to reschedule an appointment.

CAN YOU PASS THE VIRUS TO OTHERS EVEN IF YOU’VE HAD THE JAB?

This is a great unknown. Scientists are unsure if the Pfizer vaccine produces so-called ‘sterilising immunity’, as trials did not test this aspect. They only checked if it stopped people from getting ill. Pfizer says that as the vaccine is good at protecting against both serious and mild Covid illness, this ‘suggests there is a chance to protect against infection as well’. But more test results are needed before we know for sure.

WHO GETS PRIORITY FOR JAB?

Only those in the first two groups of the priority list are due to get the jab this week. The focus is on over-80s in hospital or living in their own homes. Teams will also start visiting care homes in England in a week’s time.

4. All aged 70 and over (3.3m) and those considered to be clinically extremely vulnerable

6. All individuals aged 16 to 64 with underlying health conditions that put them at higher risk of serious disease and death

THE VULNERABLE Vaccines will also be offered to those aged 16 and over who have conditions such as: blood cancer; diabetes; heart problem; chest complaint or breathing difficulties; kidney disease; liver disease; lowered immunity due to disease or treatment; with organ transplant; having had stroke or a transient ischaemic attack; a neurological or muscle-wasting condition; severe or profound learning disability; Down’s syndrome; problem with spleen or having had spleen removed; seriously overweight; severe mental illness.

About 280 GP surgeries across England will begin operating as immunisation centres in the coming days with the expected arrival of more than a million extra doses of Pfizer’s vaccine from its Belgian factory. These, on top of the 800,000 already in the country, will allow the NHS to increase the number of appointments in the run-up to Christmas. Vaccine staff will work on Christmas Day. However, it seems that care-home residents – despite being top of the priority list – will have to wait until mobile inoculation teams are ready to make home visits. Health bosses, though, hope vaccinations in care homes will begin in the final few days before the festive break. The logistics are trickier than in GP surgeries because of the fragility of the vaccine phials and the need to keep them at minus 70C (minus 94F) or below, and because the NHS wants to take one step at a time.

While ‘active consideration’ is being given to vaccinating over-80s in community settings in Northern Ireland, according to the devolved Stormont government, there are no immediate plans for GP surgeries in Scotland, where the earliest roll-out is expected to be in the New Year or early spring. The same applies in Wales.