Two daredevil YouTubers who filmed themselves breaking into the Celebrity Big Brother house during a live eviction show were today ordered to pay costs and compensation totalling £1235.

One of the men, 22 year old thrill seeker Ally Law dropped his trousers to jump into the famous housemates’ jacuzzi as his partner in crime, Ryan Taylor, 25, filmed him.

He has also been banned from entering theme parks and attractions across the UK for the next five years. 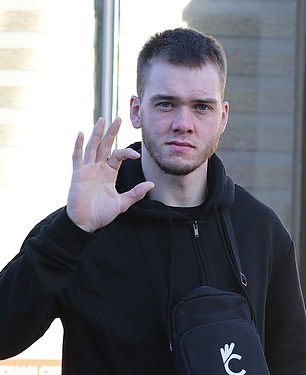 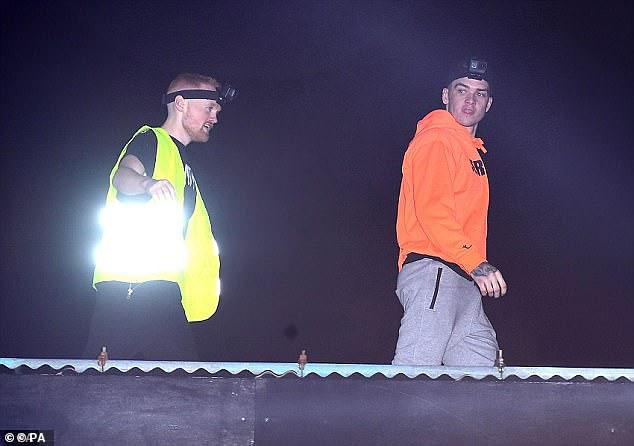 Magistrate Stuart Jack told the pair today as he sentenced them: ‘We have found you intended to obstruct and disrupt the Big Brother production but didn’t intended to intimidate.’

On the night of the break-in in January of last year security guards who had been alerted about the break-in ran into the Big Brother garden to confront the pair only to find themselves being filmed as they screamed at Ally Law, 22 who was in the pool to get out.

Both Law, who is a qualified sky diver, and his friend Taylor were then arrested by officers who had rushed to the Big Brother studio in Elstree, Hertforshire fearing a terrorist incident was underway.

It was the second time in a week the two YouTubers, who between them have millions of followers, had sneaked into the studio area to get within feet of the celebrities taking part in the Channel 5 show. 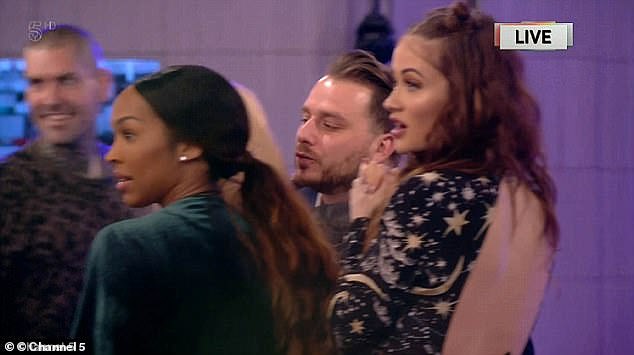 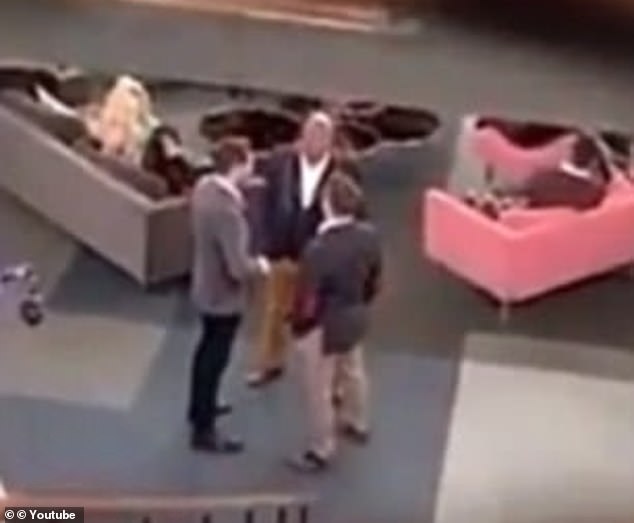 The pair have gained notoriety in the past by filming themselves carrying out mischief making stunts and antics.

They have broken into buildings including the O2 after hours and London’s National Theatre and footage of their exploits is then posted online.

The court was told that for the year 2018 a total of £220,000 was paid into Mr Taylor’s bank account generated by his YouTube videos and a sponsorship deal. That figure did not take into account his outgoings and expenditure. 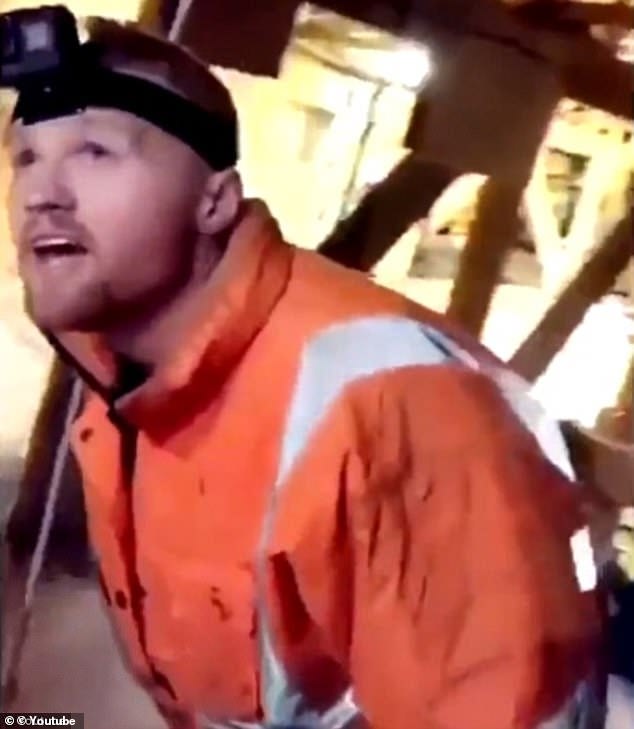 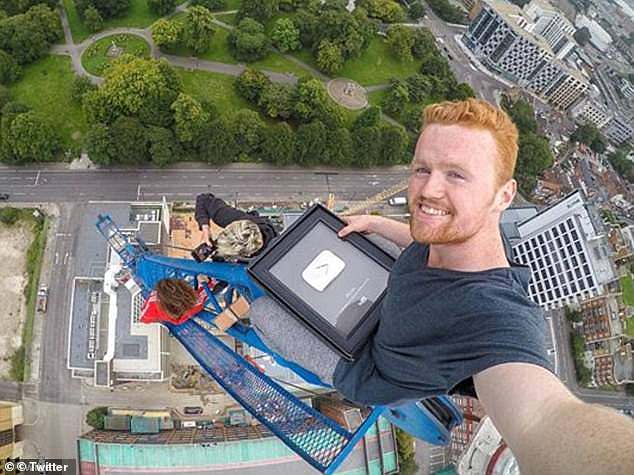 Ally Law (pictured on a building in Bangkok Thailand) has 2.4 million followers on his channel where he performs stunts and carries out pranks

For Law, who has 2.6 million followers, his income for the same year was £125,000 and the court was told he has now put together a limited company from which he draws a salary of £1000 a month. He employs his two brothers and his mother.

His income is also derived from YouTube videos and merchandising items such as T shirts and caps.

Today the pair appeared at St Albans Magistrates Court to be sentenced after being found guilty in December at the end of a trial of taking part in the intrusions.

Mr Law, from Southampton and Mr Taylor from Bloxwich, Walsall, West Midlands, had pleaded not guilty to two charges of aggravated tresspass.

They were each convicted of the two charges and sentence was adjourned until today for reports.

Sentencing the men today magistrate Stuart Jack told them they would each have to carry out 120 hours of unpaid work as part of a 12 month community order.

They were also told they would have to pay compensation of £150 each to two security staff who had helped detain them that night.

On the night of Friday January 19 the pair, who each had ‘GoPro’ cameras attached to their foreheads, filmed themselves as they scaled the perimeter fence around the studio to make their way to the ‘Big Brother’ house.

They filmed themselves as they climbed staircases, ladders and fire escapes and eventually managed to gain access to the house.

Prosecutor Clinton Hadgill said the pair managed to get into the loft area of the Big Brother house.

He said the first security staff knew that something was amiss was when it became apparent live footage of the intrusion was being shared on ‘Snapchat’ and which also showed some of the celebrities chatting in the living room area.

As a result, security staff went to the loft area where they spotted the Law and Taylor climbing a ladder.

Law was wearing high viz jacket and they claimed: ‘We are only having a laugh we just wanted to get into the pool’ referring to the hot tub in the Big Brother Garden.’

On this occasion the pair were escorted out of the house and handed over to police who had been called to the studio.

However a week later on the night of Friday January 26 the pair arrived back at the perimeter fence.

Once more they were were wearing ‘GoPro’ cameras as they climbed over the fence and made their way along a set of outside walkways, up staircases and scaffolding at the back of the set.

Law who is also a qualified sky diver was wearing a fluorescent jacket and Taylor had on an orange hoodie.

Once more security staff were alerted that two unauthorised people were clambering around the outside of the BB house.

Camera footage shot by the defendants that night was played in court and showed them reaching the garden area outside the contestants’ house and bursting into laughter.

Law is heard telling his accomplice he is going to get into the hot tub and then is seen kicking off his shoes and dropping his trousers before getting in the water in his black boxers.

On this occasion the housemates were aware that intruders were in the garden area.

Wayne Sleep told the production crew: ‘Big Brother, there are people in the house.’

Housemate Courtney Act corrected him saying: ‘Outside the house, not in the house.’

Ashley James said: ‘Oh my God someone is trying to break in.’

The court was told the housemates were immediately put into lockdown as metal shutters rolled down over the windows.

Following the two breakins the court heard the production team behind Big Brother show had had to spend thousands beefing up the security about the site.

Before they were sentenced today Mr Tom Wainwright for Law said: ‘It was not Mr Law’s intention to intimidate or cause any distress.’

He told the court his client ‘spends little time in England’ and now travels around the world making ‘lawful’ thrill seeking videos of himself sky diving, bungee jumping and wing walking which he posts online for his millions of followers.

Mr Wainwright said Laws had had a number of civil injunctions taken out against him in the past because of his because of his YouTubing with the result that he now owed in costs around £200,000.

Magistrates were told Mr Law had raised around £20,000 to fight the case through ‘crowd funding’

For Taylor Mr Umar Shahzad said: ‘He strongly expresses that he will not repeat similar offending in the future.’

He said his client who has a seven month old baby son who lives in Los Angeles with his mother, is now involved in projects in the U.K. aimed at steering youngsters away from gangs and knives.

Law was also told he was being banned from entering theme parks and attractions owened by Merlin Entertainments for the next five years.

This follows illegal entries he had made int Legoland and Thorpe Park.

He was also told he cannot renter any film or Tv studios or go onto bridges not open to the public or building sites.