As a driver, hitting a large, near-invisible pot hole and damaging your car can be an incredibly frustrating – and expensive – experience.

So one car owner, fed up with the awful state of the roads in New York City, decided to do something rather bizarre to help others navigate the hole-ridden streets – by filling every pot hole he came across with a planted tree.

YouTuber Coby Persin, 23, came up with the green-thumbed idea after he himself hit a pot hole and ruined the tire of his car – an incident he explained in a rather sweet social experiment video documenting his horticultural efforts.

He said: ‘When I was driving around New York City, I hit a pot hole and my tire popped and I had to buy a new one.’

‘So I was thinking to myself, how as New Yorkers can we avoid these pot holes? Had I seen a plant inside the pot hole, I would have drove around the plant and not hit the pot hole.’

The video then cuts to Coby planting the trees on the New York City streets in the hopes that people will the the herbage and drive around it to avoid the pot holes.

During his planting spree, some onlookers even took the time to talk to Coby and commend him. 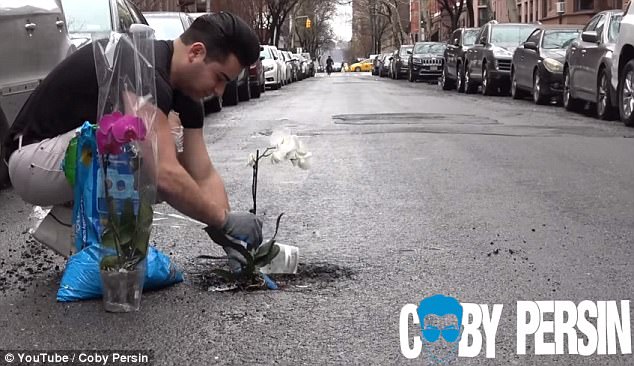 Inspiration: Coby got the idea to plant trees in pot holes after he ran over one and popped his tire

It works! In the video, New York City driver can be seen avoiding the pesky obstacles

One man said: ‘That’s a good trend to start’ while another said ‘beautiful’ after Coby told her what his plan was.

And his plan seemed to work as about halfway into the video, drivers can be seen avoiding the pot holes thanks to the trees that Coby planted.

At one point he even said: ‘It’s working baby’ when a driver evaded the concrete cavity.

The clip then shows the cars, and even a bus, that benefit from all of Coby’s hard work and consideration.

Bystanders are so taken aback, that they start to film and take photos of the planted pot holes.

One man, in a car over, even gives the camera a thumbs up after successfully eluding a pot hole that was filled with a plant.

Pot hole photo: Onlookers are so taken aback by the act that they start to snap pictures

No more pot holes: Coby hopes that the plants will help commuters avoid the street bumps

Coby then asks an observer what he thinks about putting the plants in the pot holes.

He responds: ‘That’s the sickest idea I’ve ever seen,’ and the two then hand shake in celebration.

Coby has done numerous social experiment videos and currently has more than three million subscribers on his YouTube channel.

One of his previous videos shows just how easy it is for predators to use social media to lure unsuspecting children into meeting up with them.

In the clip, Coby created three fake Snapchat profiles and struck up conversations with kids aged 12, 13, and 14 with their parents’ permission to expose the dangers of the internet.

And although the parents insisted they had warned their children about talking to strangers online, all three of the kids agreed to meet with the person they had been conversing with on Snapchat when their parents weren’t around.