The decision from Youtube came just days after the controversial vlogger tweeted Monday that he would swallow a Tide Pod for every retweet. That same day he tasered two dead rats and removed a live fish from water and ‘performed CPR’ on it.

All of this comes just a few weeks after the 22-year-old vowed to be more sensitive towards the issue of death.

Paul, who took a three week hiatus after being universally slammed for picturing a suicide victim and laughing as they hung from a tree in Japan last year, uploaded the new video to his channel on Monday.

According to the website Social Blade, which estimates influencers’ earnings from their online statistics, Paul may have earned at least $43,000 from ad revenue on YouTube in the last month alone, despite taking the break.

Logan Paul yet again sparked controversy with a new YouTube video which shows him tasering two dead rats on the balcony of his bedroom at his $6.55million Encino home. He is shown with two assistants as he administers the electric currents 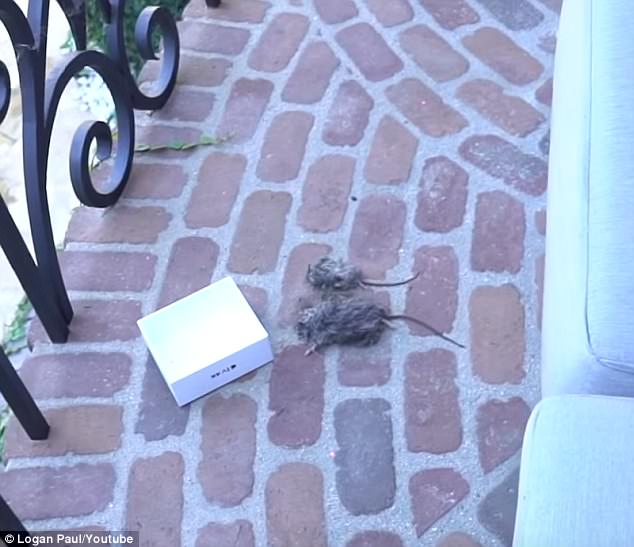 Costly pranks: YouTube suspended his advertisers over video or him tasting dead rats, doing ‘CPR’ on a fish and suggesting eating Tide Pods

‘Recent pattern of behavior’: Paul kept up dangerous antics despite just coming off a hiatus for showing suicide victim’s body

But after further controversial videos, YouTube has chosen to act citing a ‘pattern of behavior’.

‘In response to Logan Paul’s recent pattern of behaviour,’ the platform tweeted on Friday, ‘we’ve temporarily suspended ads on his channels.’

A spokeswoman said: ‘This is not a decision we made lightly, however, we believe he has exhibited a pattern of behaviour in his videos that makes his channel not only unsuitable for advertisers, but also potentially damaging to the broader creator community.’

In the recent videos, Paul is walking around his $6.5million mansion in Encino, California, showing off his ‘Maverick’ merchandise and leading viewers out onto his bedroom balcony where the two dead rodents were.

He said the had been brought there by his Pomeranian Kong. An assistant later admitted to putting one there.

With the same assistant and another friend by his side, Paul stood over the dead rodents on his balcony and pondered how to get rid of them.

He then shocked the group by producing the taser, screaming: ‘No rat comes into my house without getting tased!’

The 22-year-old then administered several electric currents to fry the already motionless animals as his assistant screamed: ‘Why?’

After firing his taser, he used the electric wire still connected to one of the rodents to lift it into the air.

The camera zoomed in on its body.

Later, after they had been place into a large trash can, Paul tasered them again.

‘Why? It’s already dead! Why?’ his assistant yelled.

Earlier in the video, he was filmed scooping out a languid fish from his extravagant coy pond and giving it CPR to ‘revitalize it’. 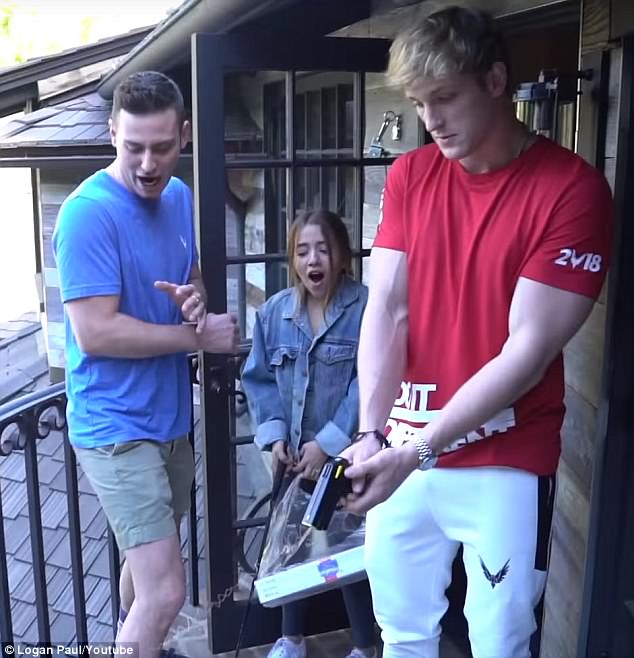 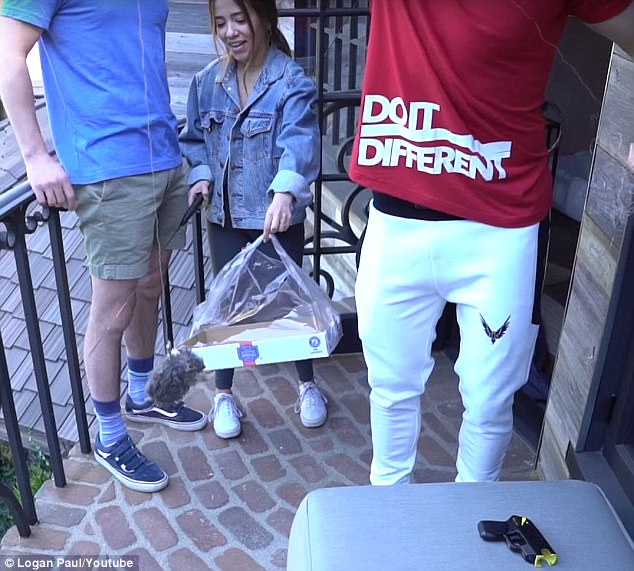 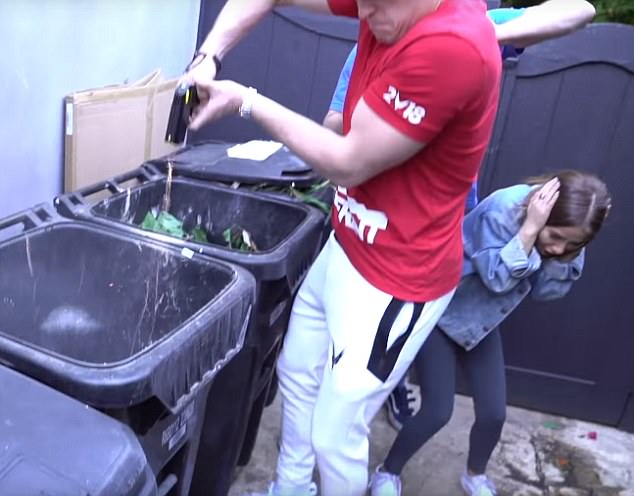 Even once the rodents had been put in the trash, Paul carried on tasering to the shock of his assistant 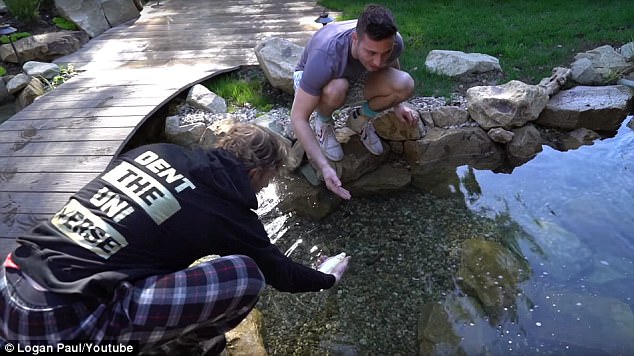 Earlier in the video, he scooped a languid fish out of his coy pond as his friend watched 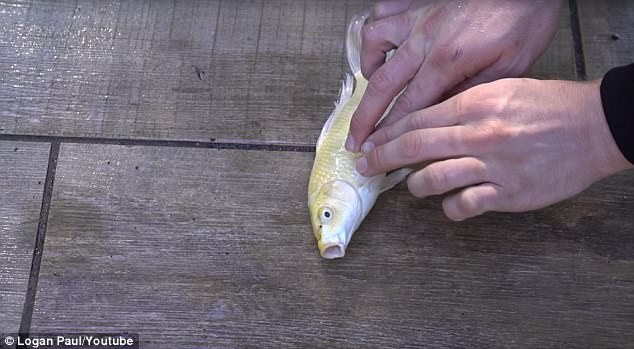 Viewers who are still reeling from his misinformed suicide forest video last year were not impressed with the content.

They took to Twitter to complain in their droves about Paul’s ongoing insensitivity.

‘I’d love to say Logan Paul has changed and learnt to respect dead things since coming back on YouTube.

‘Logan Paul reckons he’s a changed man since returning to YouTube; especially after the…incident a few weeks back. Now he’s tasering dead rats; how is this acceptable?’ asked John Armstrong.

‘At least he moved on from dead people to dead fish and dead rats,’ quipped another. 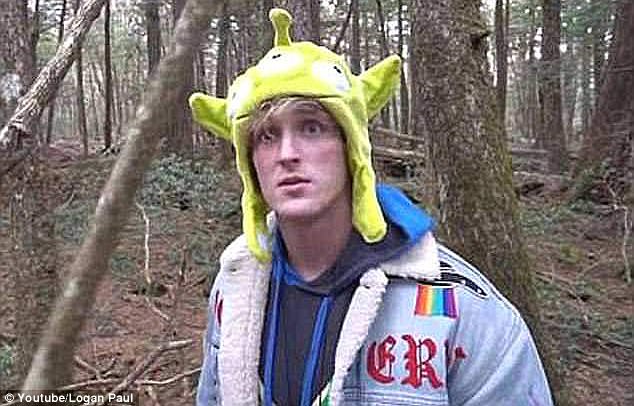 Paul was universally slammed for uploading a video on New Year’s Eve from Japan’s ‘suicide forest’ where he and his friends had gone camping for a laugh. They stumbled upon a victim hanging from a tree and kept rolling afterwards, even zooming in on his body 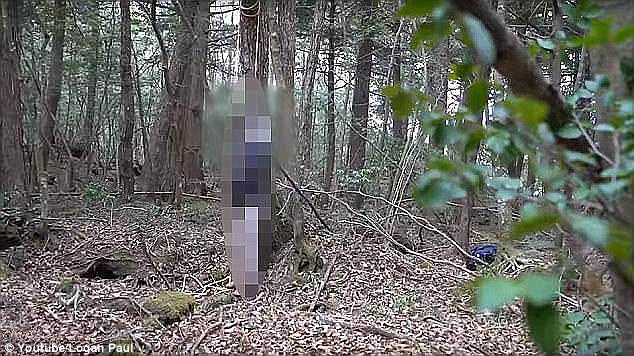 The victim that Paul included in his footage of the trip. DailyMail.com has altered the image to protect his identity. Paul did not when he first uploaded the video. He removed it not long after it was posted online

On January 31, he appalled viewers by uploading footage of a suicide victim hanging from a tree in a forest in Japan.

Paul and his friends had jokingly gone to spend the night in the woodland and giggled how they told viewers that it was ‘haunted’ by the souls of the thousands who take their lives there.

They came across the man by accident but continued rolling and zoomed in on his dead body as Paul shouted: ‘Are you f**** with us bro?’ before calling police.

He was universally condemned and took the footage down not long after it was posted, later posting a grovelling Twitter apology before signing off.

He dedicated his first video back to suicide prevention and pledged $1million to charities which support the issue. 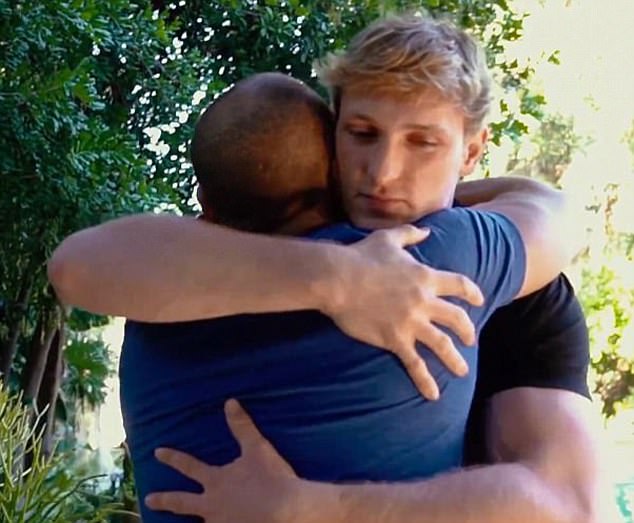 After a three-week hiatus, he returned to the spotlight at the end of January to donate $1million to suicide prevention charities and appeared in a video with suicide survivors who he interviewed to try to educate himself on the issue 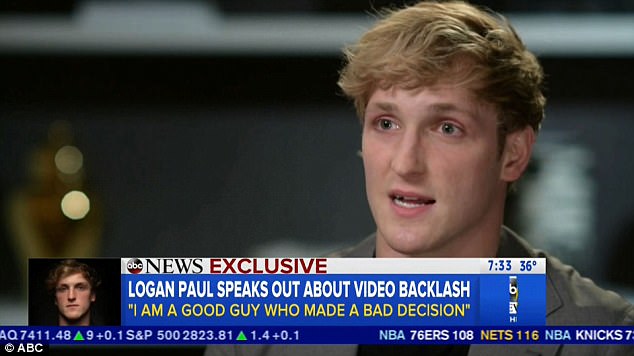 On February 1, he made a graceless appearance on Good Morning America where he complained that he’d received death threats and said parents should not let their parents watch his content

Vowing to ‘be better’, he said solemnly to the camera: ‘I was ignorant.’

His humility did not last long.

Just a few days after the video was uploaded, Paul played the victim during an interview on Good Morning America where he bemoaned the fact that the scandal had lost him millions of dollars.

‘It’s been tough, cause ironically I’m being told to commit suicide myself,’ said Paul.

‘Millions of people literally telling me they hate me, to go die in a fire. Like, the most horrible, horrific things.’

He then told interviewer Michael Strahan that the fault lay with the parents of teenagers who allow them to browse the internet unmonitored.

‘I’m going to be honest with you, Michael, I think – I think parents should be monitoring what their children are watching more,’ said Paul.

On February 4, two days after the interview, he posted a video to his vlogs channel where he jokingly referred to the scandal and his break from the spotlight. 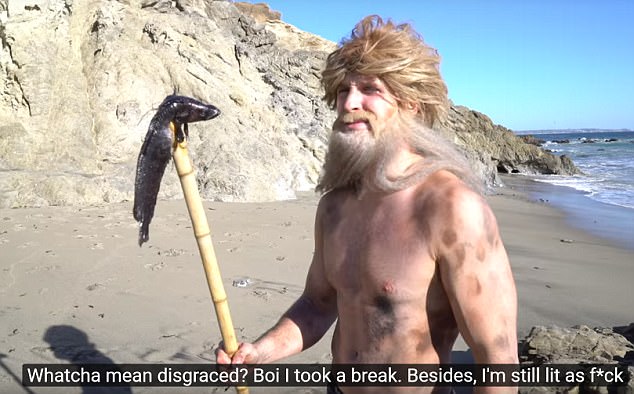 All his humility appeared to have been lost when he made his first vlog after the hiatus. It showed him washing up on a beach, after the scandal, and boasting about his ‘lit’ content 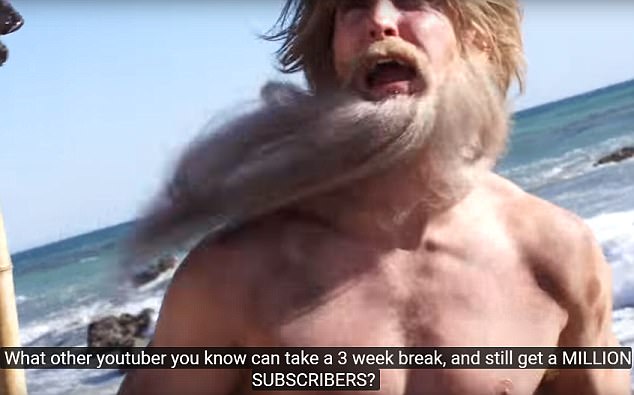 Appearing on a beach as a dishevelled wreck, he argued with a spoof commentator who, in a voiceover, labeled him a disgrace, saying: ‘What you mean disgraced? Boy I took a break. Besides, I’m still lit AF.

‘What other YouTuber you know can take a three week break and still get A MILLION SUBSCRIBERS?’

In that video, he appeared shirtless with a fish on a spear.

On Tuesday night, with the criticism for his latest video growing, Paul returned home to his luxury house to find an intruder sitting on his couch, charging his phone.

He made a citizen’s arrest then waited for police to arrive, according to TMZ.

Sources said the man was a fan who simply wanted to meet the internet star.

Paul and his brother Jake are among the highest-earning YouTube stars in the world.

Earlier this month, he was filmed rapping the N-word during a freestyle performance in one video.

He has also terrorized neighbors in the plush California enclave of Calabasas where he owns a $6million home. 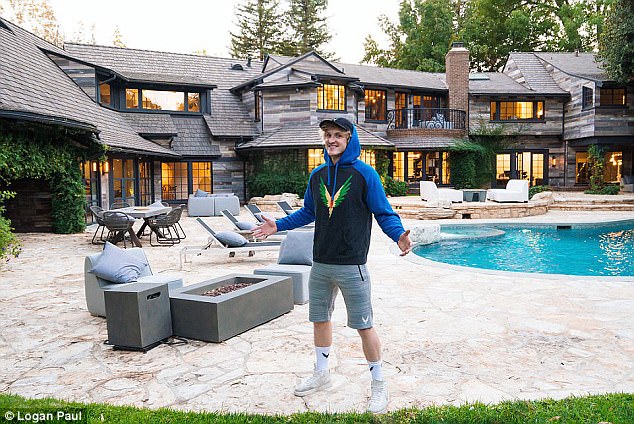 On Tuesday, the 22-year-old returned home at 10pm to his Encino, California, mansion to find an intruder on the couch, charging his phone. Paul called police and waited for them to arrive. The intruder got into the $6.55million house through an unlocked door