Your healthy-ish snack may not be as guilt-free as you believe, as these photos of misleading packaging prove.

These packets all display nutritional values that make the tasty treats seem low in calories, salt, fat and sugar.

But if you take a closer look, the values are based on a tiny serving size that is only a small proportion of the entire packet.

Comedian Jay Foreman, who writes ‘silly educational’ videos and songs aimed at children and has more than 277,000 subscribers on Youtube, is the latest person to draw attention to the issue.

He posted a picture of a 40g bag of Rosemary and Himalayan Sea Salt crisps on Twitter, where he has more than 17,000 followers, last week, which states that the recommended serving size is just 25g. 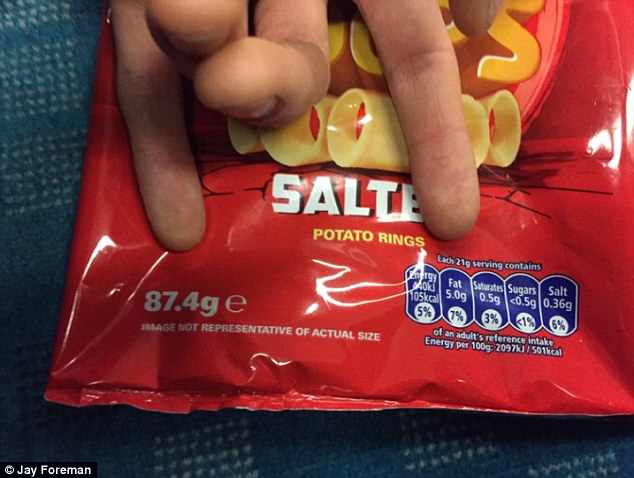 Jay Foreman also showed FEMAIL this 87.4g bag of Hula Hoops which states that a serving is just 21g – meaning there are more than four portions in this one bag

The ‘traffic light’ labels on the front of the bag are all green, which suggests it is a healthy snack.

But Mr Foreman branded the treat ‘cheeky as f***’ after realising that on closer inspection, the nutritional values are only low because it recommends people only eat a little over half the bag.

He tweeted: ‘I should add, this photo makes the packet look huge. It’s not.

‘It’s a normal sized packet of crisps that no one in their right mind will eat anything less than all of.’ 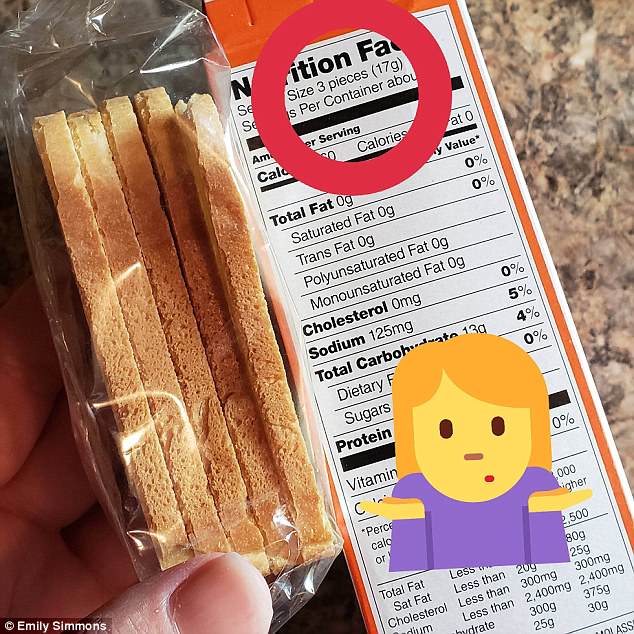 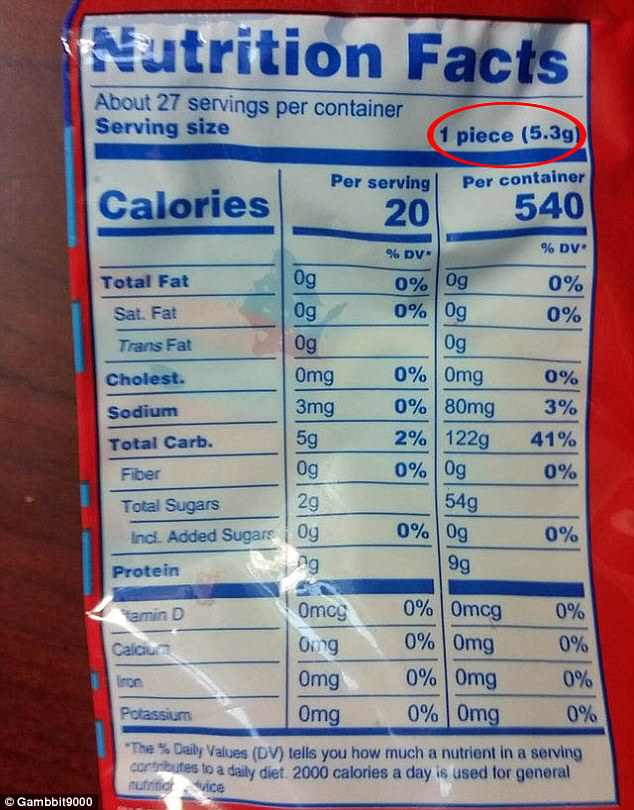 Gambit9000 on Reddit posted a picture of a bag of gummy bears which recommends that one 5g gummy bear sweet is a serving size – so no wonder the nutritional values per portion look so healthy! 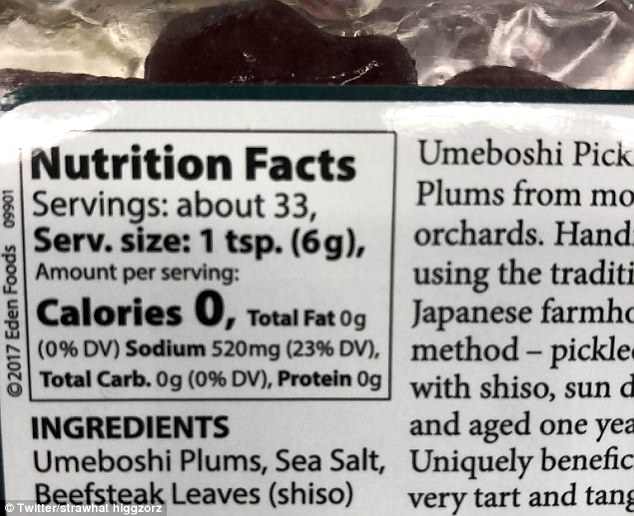 One tsp of plums, please! Strawhat Higgzorz ‏on Twitter noticed this very peculiar recommended serving size on the back of a packet of plums, which advises that shoppers eat 1 tsp at a time – which contains zero calories

Mr Foreman also shared another snap of a 87.4g bag of Hula Hoops salted potato hoops with FEMAIL, where the recommended serving size is just 21g – meaning there are more than four servings in one sharing bag.

The nutritional values on the front of the packet therefore make the snack appear healthy as one portion contains just 105 calories and 0.36g of salt.

However some people might expect to share the bag with just one other person, or eat it all by themselves.

Mr Foreman is not alone.

Dozens of other disgruntled snackers have highlighted the difference between packet size and the recommended serving amount, branding it the result of misleading packaging. 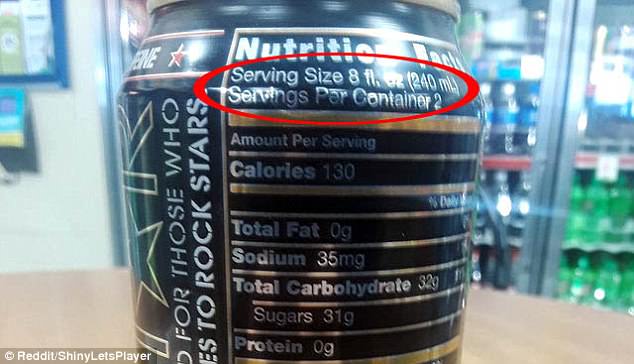 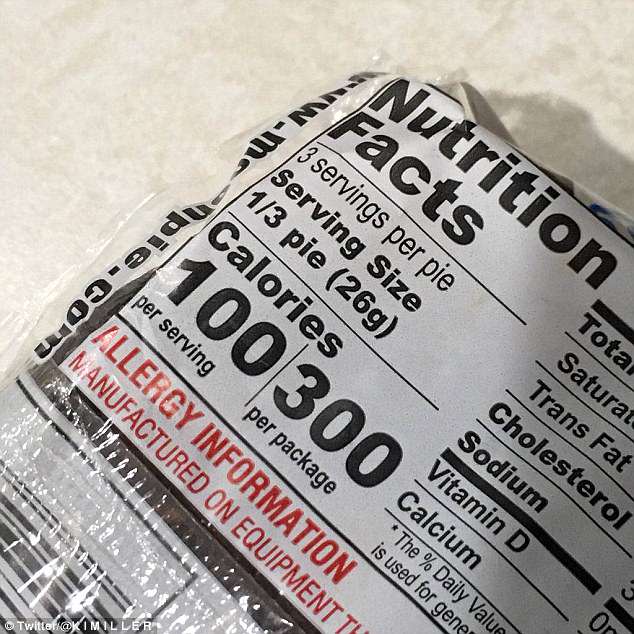 Kim Miller posted a photo of the recommended serving size for a Moon Pie, a popular American chocolate marshmallow and biscuit treat – which advises that you only eat a third of the pie at a time 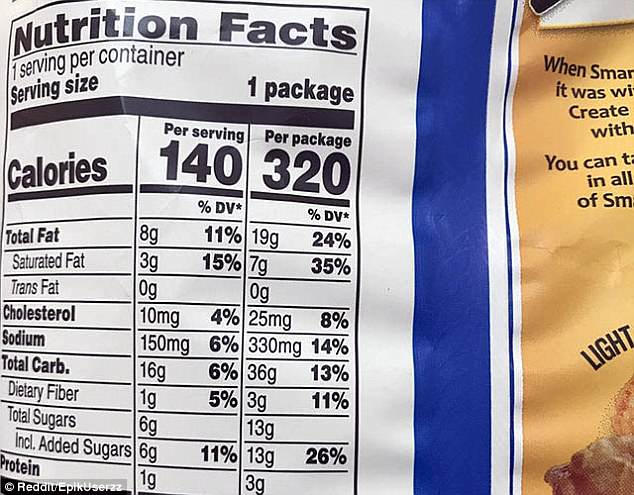 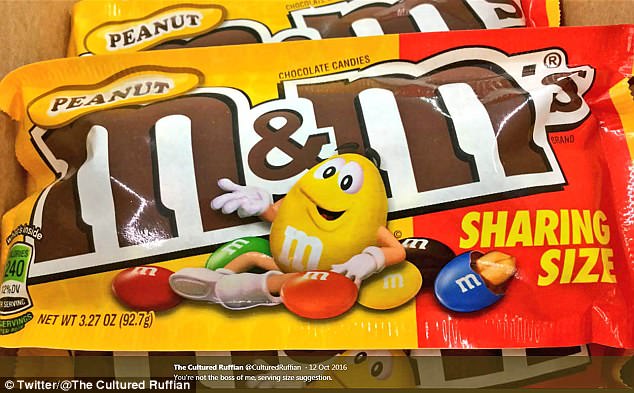 This may look like a normal sized packet for one to many people but M&Ms recommends this bag contains two portions, and tells shoppers it’s a ‘sharing size’. However The Cultured Ruffian said he would eat the whole thing himself