YouTubers drink own urine because ‘it cures anything’

Health-obsessed YouTubers are filming themselves drinking their own urine in order to promote what they say are the many benefits that this bizarre process offers – including its use as a cure for a variety of diseases and disorders.

The process of drinking your own pee is actually a part of the alternative medicine known as urine therapy where you drink human urine or massage it onto the skin because it apparently detoxes your entire body while curing it of any illnesses.

Whatever the health benefits may be, health bloggers are eating the new trend up and are posting videos where they not only drink their own urine they slather it all over their faces and even massage it into their scalps.

Gross: Health vloggers like Rain Florence (pictured) are filming themselves drinking their own urine and posting the videos to YouTube because they think it has many health benefits 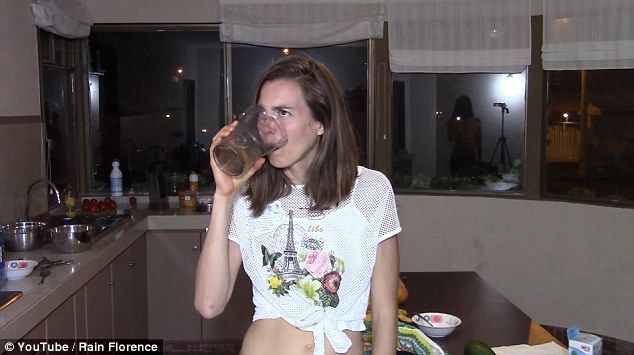 Delish: The process of drinking your own pee is actually called urine therapy and it apparently detoxes your entire body while curing it of any illnesses 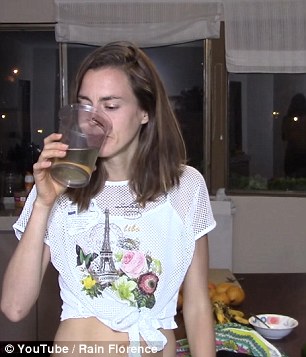 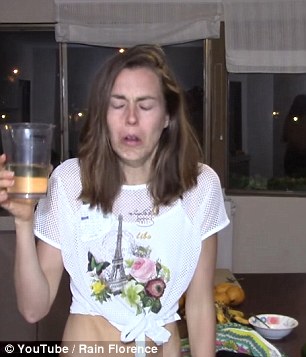 Disgusting: Rain (pictured) takes a huge gulp of her urine and even gags on camera 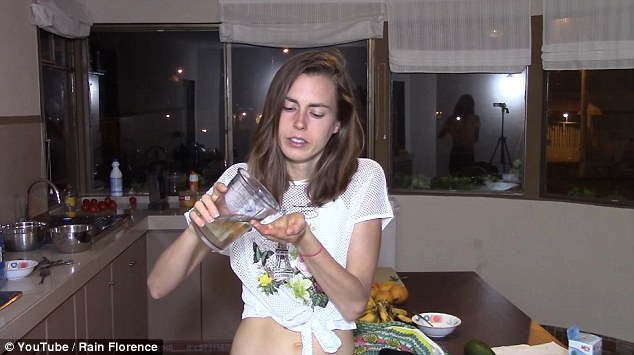 Benefits: Aside from drinking the urine, Rain (pictured) explained that it can cure dandruff if you massage it into your scalp 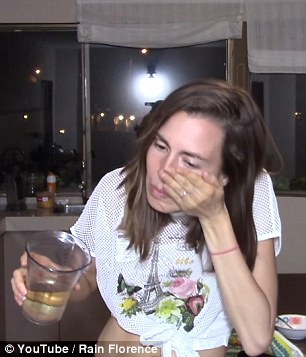 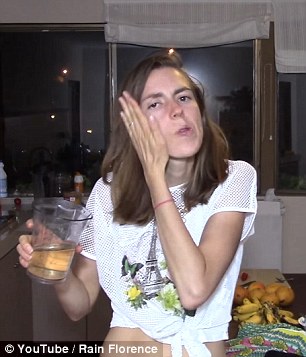 Moisturizer: Urine apparently can also be used as a skincare product as Rain is pictured slathering it on her face

According to Babe, one popular health vlogger with over 100,000 subscribers, Rain Florence, posted a video of herself holding a measuring cup full of her urine.

She begins the video talking about how amazing all the benefits are, ‘It’s the best form of vitamins and nutrients that you can possibly take in and it’s supposed to expel parasites.’

Rain wrote in the caption of the video, ‘There is practically nothing it won’t cure,’ along with about 100 or more different diseases and disorders that it might help cure.

Throughout the video you almost think it’s a joke because drinking your own urine doesn’t sound too enticing.

Plus, at one point Rain looks into the camera after using the pee as a moisturizer and says, ‘I’m getting a nice sting on my face from applying the urine to my skin.’

After explaining what it could cure she says into the camera, ‘Today’s video is all about urine therapy and I’m actually going to drink my urine for you. Here’s my urine I just peed just a few minutes ago.’

It’s hard not to cringe when you watch her take a huge gulp and gag on the camera but it gets even worse when later on in the four minute video, she pours the pee into her hands and slathers it all over her face.

Explaining that urine is good for the skin and can reverse signs of aging, Rain continues to pour the pee on her cheeks and then says how it can also cure dandruff as she massages some into her scalp.

Aside from Rain, there are a bunch of other YouTubers posting videos of themselves drinking and bathing in their own urine such as Quartz Crystal, Ruby Stone and Katrine Rudolph who actually said in her video, ‘I actually like the taste of my urine, it tastes nice.’ 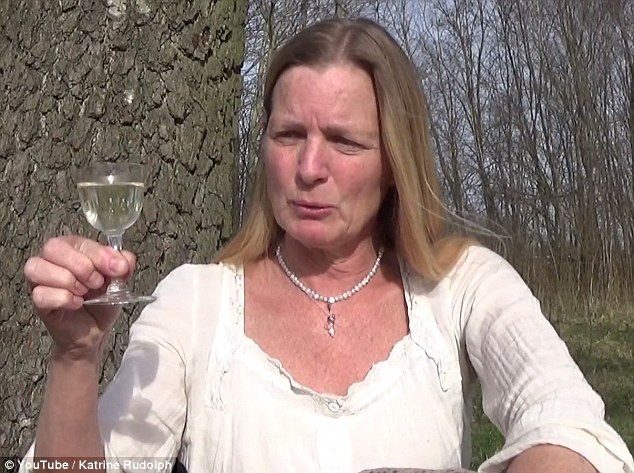 Delicious: Katrine Rudolph (pictured) practices urine therapy and even said that she actually likes the tastes of her own urine saying, ‘it tastes nice’ 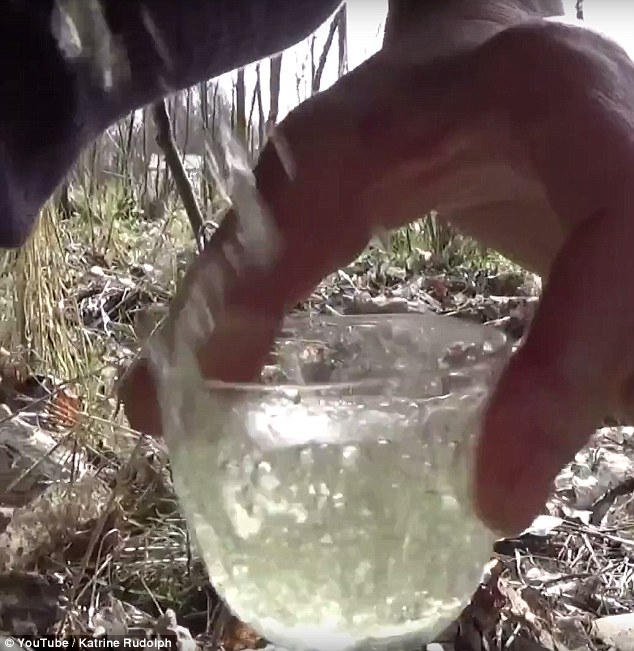 Healing: Katrine said in her video caption that even though drinking pee sounds gross (Katrine’s urine pictured), ‘it’s the sterile liquid from our blood’ 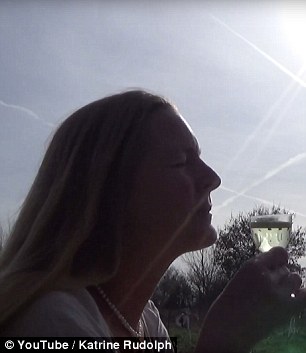 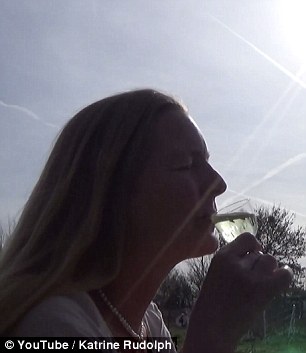 Yum: Katrine (pictured) also went on to say that urine is ‘the most perfect medicine for us as it contains antibodies and healing agents against every imbalance in our bodies’

Katrine went on to say in the caption of her video, ‘When we first hear about this we think it sounds disgusting. But actually urine is the sterile liquid from our blood.

‘It is also the most perfect medicine for us as it contains antibodies and healing agents against every imbalance in our bodies.’

It doesn’t stop there though and people are posting all over the internet that they’re trying out the new health trend.

In one horrific Facebook thread someone shared on Twitter an anonymous user commented, ‘So I decided to put a few drops of aged urine into my eyes and they went really blood shot.

‘It didn’t sting or anything. My left eye got what looks like a burst blood vessel after so I rinsed them out with fresh urine.

‘Now I keep getting a little blob of puss in the corner of my left eye. Is this normal? My aged urine is about nine days old and it had floaty things in it.’

No: People are not amused by the latest health trend like this one user 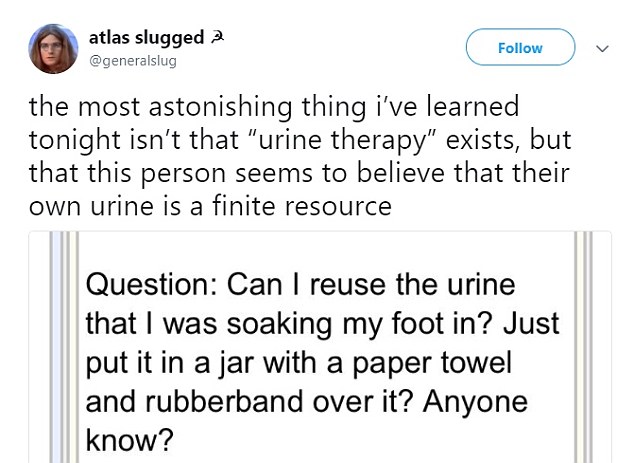 Amazing: This user couldn’t help but share how crazy it is that people are using their own urine for anything they could think of 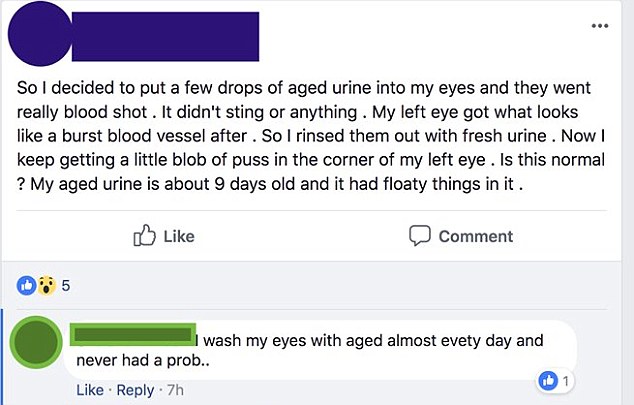 Wow: In an anonymous Facebook thread posted to Twitter one person described what happened when they poured their aged urine in their eyes on purpose

Gross: This guy was quite disgusted that people would put old pee in their own eyes

Unbelievable: He followed up on his own tweet saying he would love to know who stores jars of their own old pee

Disgust: One user just simply couldn’t understand how this whole trend is even real

Shock: This guy is mind blown that people are using urine for anything at all

Someone replied to the thread saying, ‘I wash my eyes with aged almost every day and never had a problem.’

People are utterly repulsed by the idea of drinking your own bodily fluids let alone pouring it into your eyes and one man even tweeted, ‘DEAR LORD, WHY?’

While another woman wrote, ‘Apparently there is such a thing as urine therapy? Um, no thank you I’m good.’

In response to the anonymous Facebook thread someone commented, ‘Can I now ask that you DON’T PUT WEEK-OLD PISS IN YOUR EYES? Thank you.’

He then followed up on his own reply saying, ‘I’ve been thinking about the mechanics behind this, and now I need to know what kind of person has a collection of piss jars sorted by age.’

Meanwhile, other users were in sheer horror as one person wrote, ‘I’m losing my goddamn mind over this.’

‘The most astonishing thing I’ve learned tonight isn’t that urine therapy exists, but that this person seems to believe that their own urine is a finite resource,’ said another user.

Even though people may think that urine therapy is good for you, urologist Zaki Almallah told Marie Claire that the reason you pee in the first place is so that your body gets rid of all the fluid and toxins it doesn’t need.

He said, ‘The point of urination is to rid the body of excess. Why would you want to re-absorb that? The only time it’s medically recommended to ingest urine is if you’re stranded without food or water for many days.’