In 2019, Yves Bissouma laughed in Arsenal’s face as Brighton picked up a point at the Emirates Stadium to ruin the Gunners’ top-four hopes… but now he may be auditioning for a role in north London next season.

The Seagulls star roared his head off following a 1-1 draw against Unai Emery’s side which all-but-ended the Gunners’ chances of playing Champions League football the following season – something the north London side can only dream about now.

Two years later, Bissouma travels to Arsenal on Sunday safe in the knowledge he will be a Premier League footballer next term – but several reports state the midfielder could end up returning to the Emirates as a Gunners player during the summer. 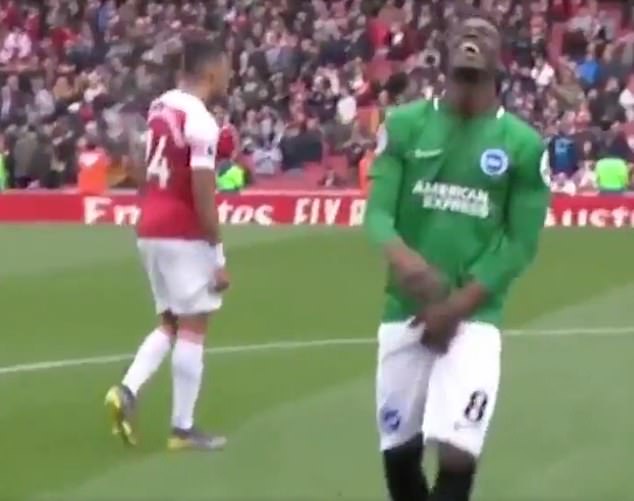 Mikel Arteta’s side are reportedly interested in signing the £40million-rated midfielder along with Liverpool, as Arsenal plot a summer spending spree as they face a season without top European football for the first time in 25 years.

The man who once mocked Arsenal’s inability to reach their goals, Bissouma could be the player to spark a revival in the red half of north London after hitting rock-bottom under Arteta this season.

Arsenal may face a crucial summer regarding their midfielders, with Dani Ceballos’ loan spell from Real Madrid coming to an end, Granit Xhaka reportedly seeking a move away from the club and Mohamed Elneny having just a year left on his contract.

Should the trio depart this summer to raise funds and free up squad space, that would only leave last summer’s marquee signing Thomas Partey and Joe Willock as their holding central midfielders at the club. 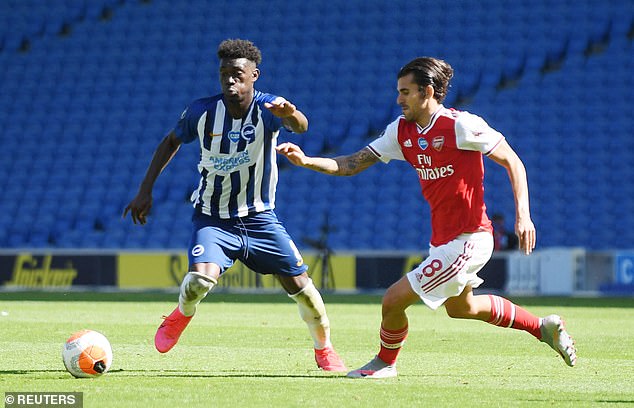 HOW DOES BISSOUMA COMPARE TO ARSENAL’S MIDFIELDERS?

All stats from 20/21 league season

All stats by Opta

The statistics show why Bissouma has reportedly been identified as the man to fix Arsenal’s midfield conundrum – the Mali international’s defensive stats are vastly superior to those of Xhaka – who has been a controversial figure at the Gunners over the past five years.

Bissouma outranks the Swiss international captain in his recoveries, interceptions, tackles and overall duels won. The Brighton star’s numbers are similar to £45m-rated Partey’s – who was playing Champions League football at Atletico Madrid a year ago.

Before joining Brighton, Bissouma made his name at Lille, where he played under Marcelo Bielsa, albeit as a right back. But the intensity the Malian shows means it is no surprise that the iconic Argentine coach picked Bissouma on a regular basis in defence.

These defensive figures also show why Brighton have been successful in matches against higher quality opposition.

Bissouma has featured in victories over Liverpool, Tottenham and Manchester City this season – Arsenal picked up just one victory in the nine matches they played against the same opposition this term.

While his defensive numbers stand out in the Malian’s game, his attacking game is also impressive. Bissouma has created more chances than Xhaka and Partey this season despite playing for a bottom-half team, while the 24-year-old has also taken on more shots than Xhaka, Elneny and Ceballos combined.

It’s why the man himself believes he is similar to Yaya Toure, known as one of the best all-round midfielders in Premier League history.

Bissouma told The Argus in April: ‘I admire Paul Pogba but I’m Yves Bissouma, simple as that. I watch players like Pogba, who I really like. But my favourite player is Yaya Toure.

His performances have been noted by some of the top analysts in the English game. Jamie Carragher called on his former club Liverpool to take a look at Bissouma this summer amid Gini Wijnaldum’s uncertain future. 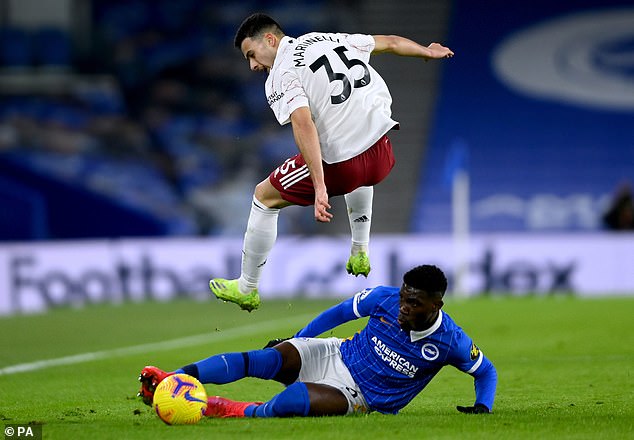 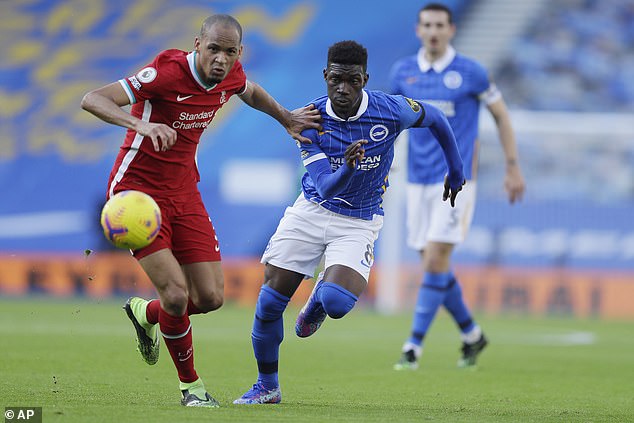 Carragher told Sky last month: ‘He’s been someone a lot of teams have talked about or looked at. I don’t think teams will be looking at him, I think they will be bidding for him at the end of the season.

‘His contract has got a couple of years to go. I know Brighton fans will be watching and saying, “Why are you trying to sell one of our players?”

Bissouma will be hoping he can prove he is ‘top dollar’ this Sunday against the side he reportedly supported as a boy.

Impress against the Gunners and in front of the on-looking Arteta and there could be the chance to move towards the ‘Yaya Toure status’ he looks up to.