Something to tell us? Zac Efron and rumoured new girlfriend Vanessa Valladares step out for brunch in Lennox Head after their ski holiday

They’ve just got back from a ski holiday together in Thredbo.

And it seems things are going from strength to strength for Zac Efron, 32, and rumoured new girlfriend, Vanessa Valladares.

On Saturday, the pair were spotted enjoying brunch at a beachside cafe in Lennox Head, which is close to Byron Bay.

Something to tell us? On Saturday, Zac Efron and rumoured new girlfriend Vanessa Valladares stepped out for brunch in Lennox Head after their ski holiday 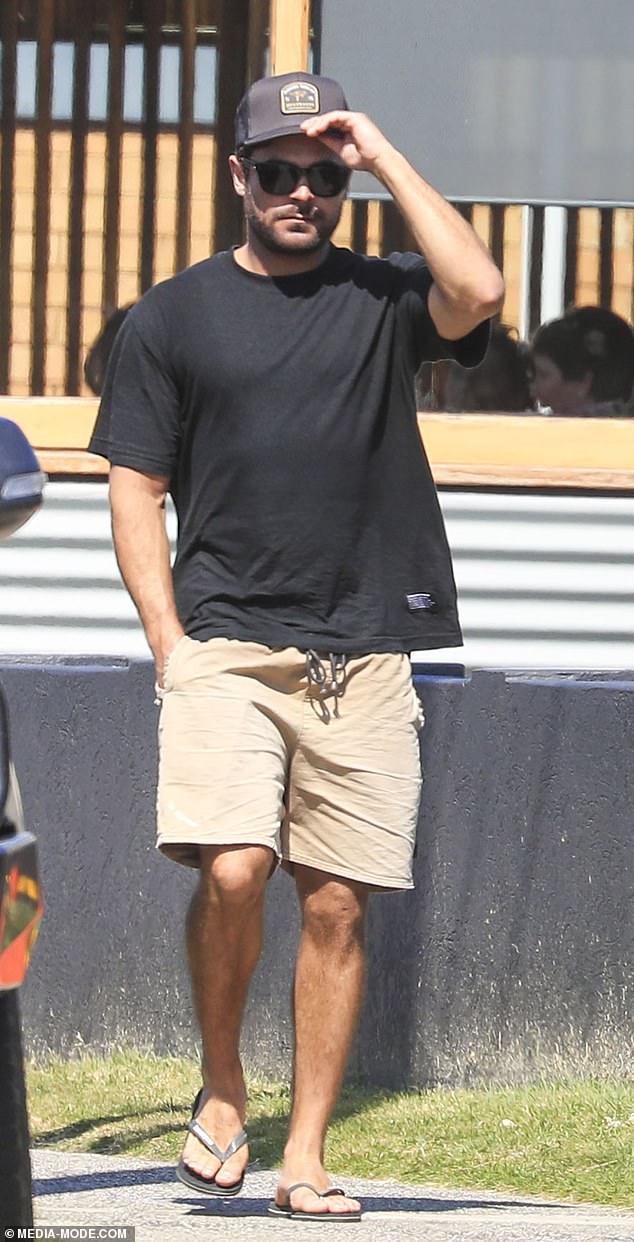 Casual: High School Musical star Zac cut a casual figure in a black T-shirt, which he teamed with beige shorts and thongs

High School Musical star Zac cut a casual figure in a black T-shirt, which he teamed with beige shorts and thongs.

He covered up in a black hat and dark sunglasses.

Vanessa meanwhile, showed off her trim pins in a leather-look miniskirt and a white printed T-shirt.

Flashing the pins: Vanessa meanwhile, showed off her trim pins in a leather-look miniskirt and a white printed T-shirt

She teamed the look with maroon sandals, a gold necklace and dark sunglasses.

The pair looked relaxed on the outing, sitting by an open window as they waited for their meals.

At one point, Zac kept occupied on his phone.

The pair have just got back from a ski holiday in Thredbo.

In photos obtained by The Herald Sun, the pair were spotted leaving a plane in Ballina together following the trip.

The Hollywood actor, 32, reportedly met Vanessa in July when she was working as a waitress.

She’s rumoured to have quit her job now and is said to be staying with Zac at Belongil Beach.

‘He was only planning to fly home if he had to,’ a source revealed. ‘He didn’t really want to go back to America.’

Zac had purchased the plane ticket several months ago in case his application for a visa extension was denied by the Department of Home Affairs.

But it seems his request to have his tourist visa extended from three months to 12 months was granted, hence why he cancelled his trip home.

It comes just days after The Daily Telegraph reported that Zac had ‘inspected and put in an offer’ on a home in Byron Bay.

However, he was apparently outbid at the last minute by a rival buyer.

Zac was apparently disappointed because he had ‘fallen in love’ with Byron Bay.

While he is staying in Australia for the time being, the Baywatch star will have to return to America eventually due to his filming commitments.

He is scheduled to star in the Disney+ remake of Three Men and a Baby, based on the classic 1987 comedy starring Steve Guttenberg, Tom Selleck and Ted Danson.