Ukraine will reclaim Crimea, President Volodymyr Zelensky has vowed, calling the peninsular annexed by Russia in 2014 ‘our land’ in an address on Thursday. Speaking in Davos, Ukraine’s wartime leader also criticized hesitation by Germany about supplying its modern Leopard tanks, with reports saying Berlin will only provide them if the U.S. offers its Abrams tanks as well. The U.S. has said it is not ‘there yet.’ ‘There are times where we shouldn’t hesitate or shouldn’t compare. When someone says “I will give tanks if someone else will also share tanks,”‘ Zelensky told an audience in Davos by videolink. ‘I don’t think this is the right strategy to go with.’ 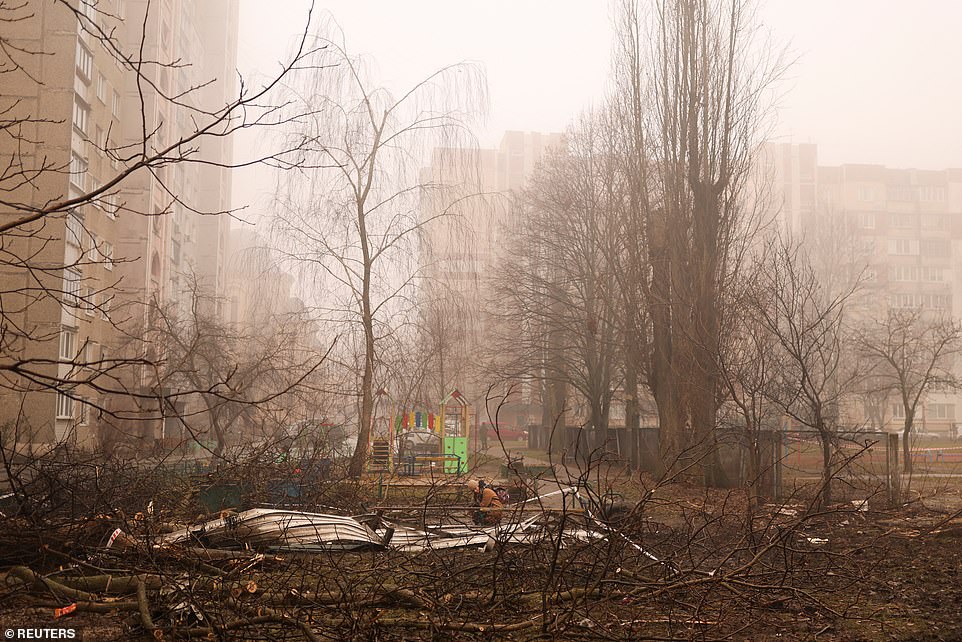 Speaking late on Wednesday, the president said that there were ‘several’ theories being investigated to explain a helicopter crash that killed the country’s interior minister and 13 others earlier in Kyiv. He said the crash near a nursery was ‘not an accident,’ calling it a consequence of Vladimir Putin’s invasion of his country. ‘The investigation is ongoing. There are several theories and I’m not authorized to talk about any of them until the investigation is finished,’ Zelensky told an audience in Davos when asked if the crash was an accident. 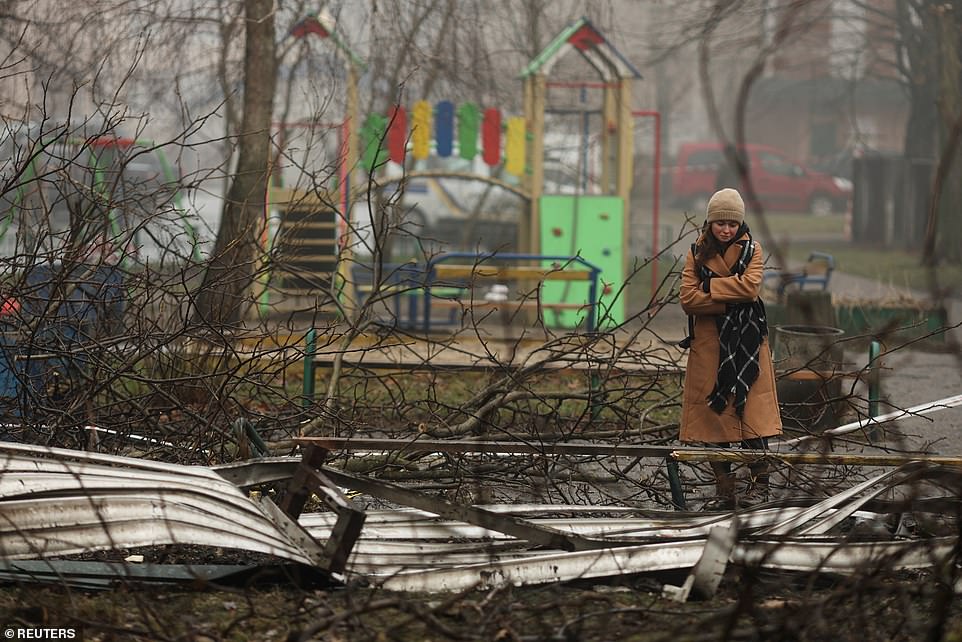 Ukraine did not claim direct Russian involvement in the helicopter crash, but Zelensky said the tragedy was a consequence of the war. ‘There are no accidents at war. These are all war results,’ he said in English, appearing by video link in the Swiss resort town. He also renewed calls for modern, Western-designed heavy tanks, which analysts say are crucial to pushing through entrenched defensive lines in eastern Ukraine. Zelensky has frequently pleaded for modern Western weapons, especially heavy battle tanks, so Ukraine can regain momentum following some battlefield successes in the second half of 2022 against Russian forces that invaded last February. 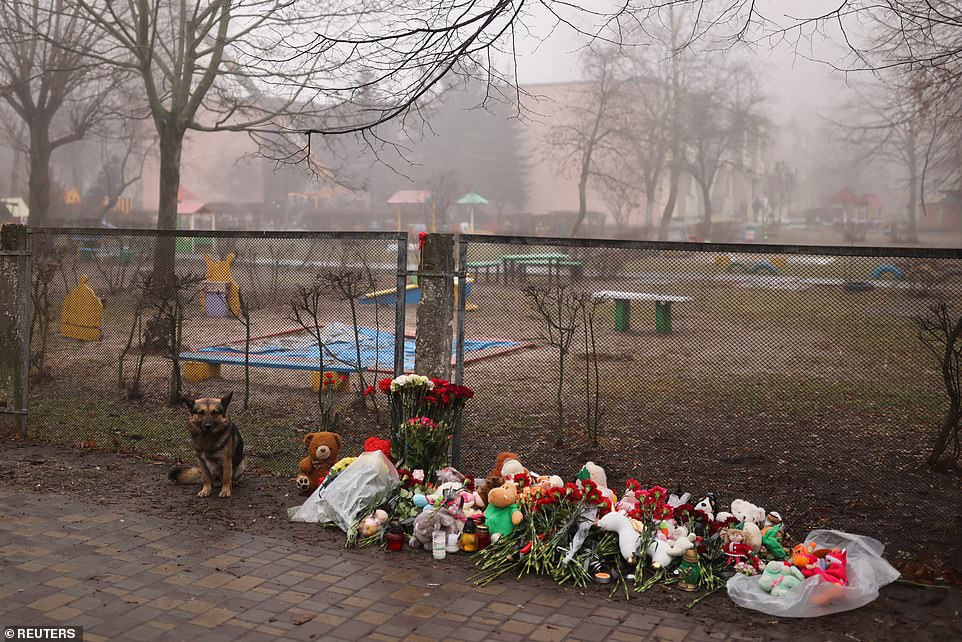 Ukraine’s Western allies and arms suppliers are set to meet on Friday at the U.S.-run Ramstein base in Germany. ‘We need all the strength there is out there because we are fighting against all of this tyranny,’ he said, ‘We can not just do it (the fight) with motivation and morale.’ He compared weapons to a ‘vaccine against Russian tyranny.’ Asked about fighting on the frontlines, he said there was ‘no stagnation’ but there was a ‘slowdown’ during the winter. He reiterated on Thursday that Ukraine aimed to reclaim Crimea, amid reports that the United States was warming to the idea of assisting in that objective. ‘Our objective is to liberate all of our territories,’ he told an audience in Davos, speaking in Ukrainian. ‘Crimea is our land, our territory, our sea, and our mountains. Give us your weapons and we will bring our land back.’ 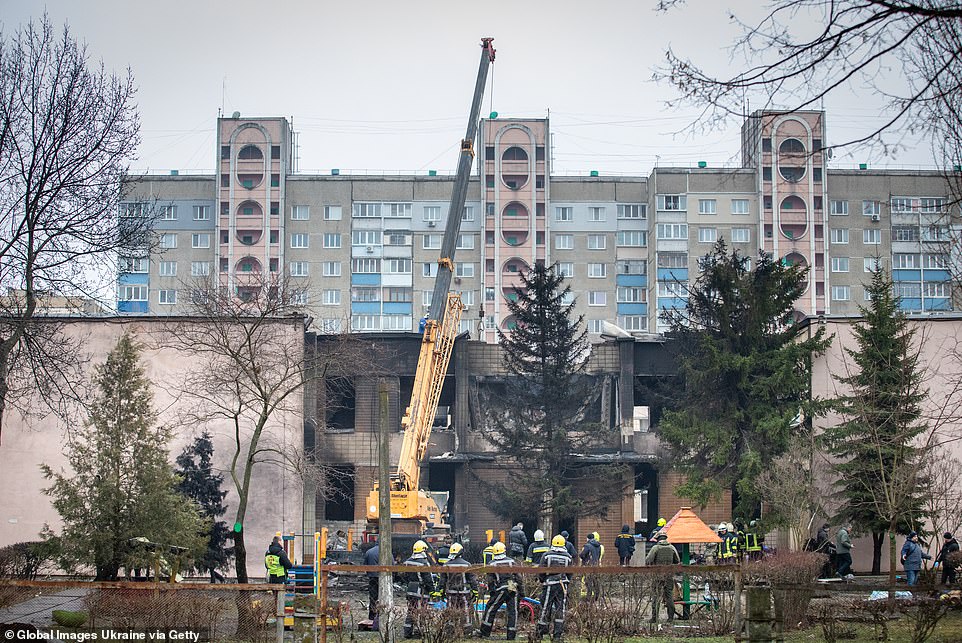 And in a barely veiled reference to Germany, where Chancellor Olaf Scholz is weighing whether to greenlight the export of its highly regarded Leopard tanks, Zelensky issued a ‘call for speed’ on Wednesday. He warned: ‘Tyranny is outpacing democracies.’ ‘The time the Free World uses to think is used by the terrorist state to kill,’ Zelensky said ahead of a meeting of Ukraine’s Western arms suppliers in Germany on Friday. ‘The world must not hesitate today or ever,’ he added. ‘The mobilization of the world must outpace the next military mobilization of our joint enemy.’ Britain is set to send Challenger 2 tanks to the embattled nation, the United States has promised to send its powerful Bradley armored fighting vehicles and is reportedly planning to send Stryker armored vehicles as well, and France has offered its highly mobile AMX-10 RCs. Such offensive weapons have long seen as off-limits by hesitant Western nations. 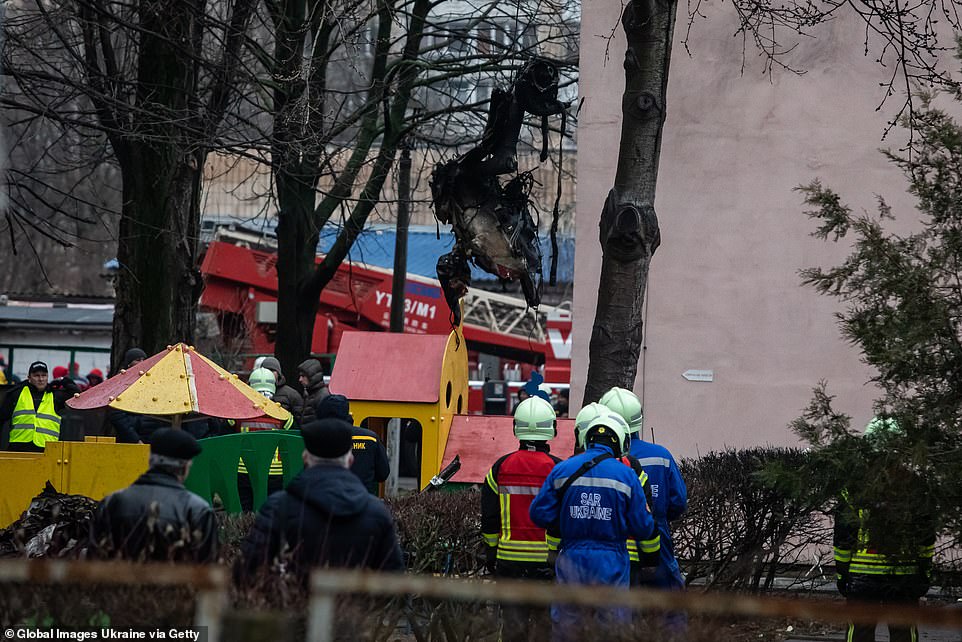 Berlin has veto power over any decision to export its Leopard tanks, fielded by NATO-allied armies across Europe and seen by defence experts as the most suitable for Ukraine in the country’s fight against the Russian invaders. But several times in recent days, German Chancellor Olaf Scholz has stressed, behind closed doors, the condition that U.S. tanks should also be sent to Ukraine, a German government source told Reuters news agency. The statement came after NATO chief Jens Stoltenberg said the alliance would provide ‘more advanced support, heavier weapons and more modern weapons, because this is a fight for our values.’ Meanwhile, in Washington, Under Secretary of Defense for Policy Colin Kahl said the United States was not ‘there yet’ when it came to providing advanced Abrams tanks to Ukraine, though he did not completely close the door on a shift in the future. 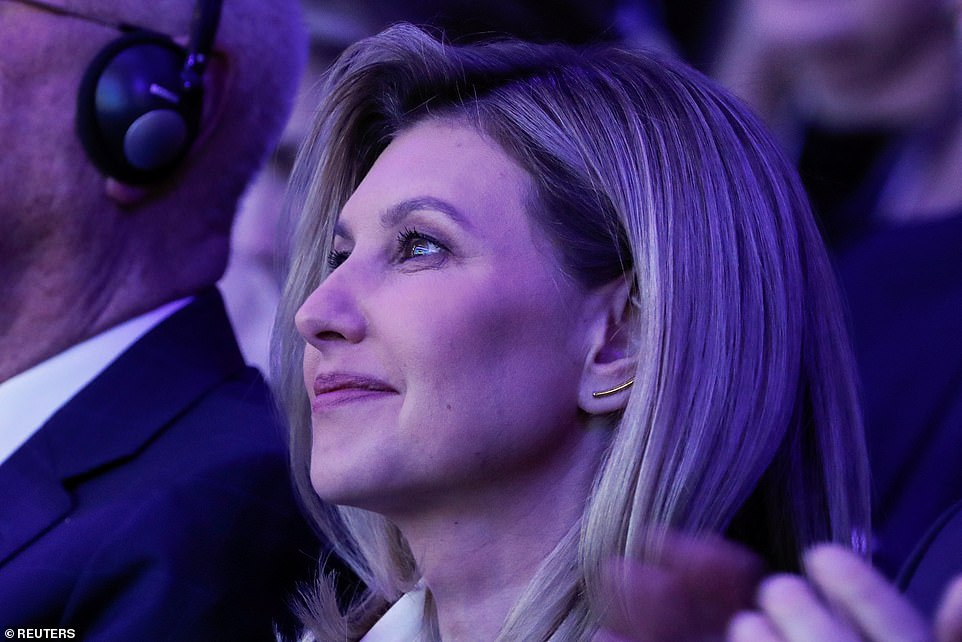 Meanwhile, reports from the U.S. capital suggested that the U.S. was warming to the idea of helping Ukraine retake Crimea from Russia. The peninsular is home to thousands of Russian troops and military bases. Washington has long maintained its position that Crimea is Ukrainian. Now, after months of discussions with Ukrainian officials, the New York Times has reported White House officials are starting to conceded Kyiv may need more help. Meanwhile, EU chief Charles Michel said on Thursday he was on his way to Kyiv to discuss with Zelensky what ‘concrete measures’ Europe can take to support Ukraine. ‘I am on my way to Kyiv,’ Michel said in a video he posted on his Twitter account, saying he would meet Zelensky as well as the prime minister and MPs. The European Council president also said he would ‘discuss with president Zelensky and his team what are the concrete measures we can develop in order to make sure they are stronger and more powerful.’ Pictured: Ukraine’s first lady Olena Zelenska watches Ukrainian President Volodymyr Zelensky addressing the World Economic Forum (WEF) via video link, in Davos, Switzerland, January 18. 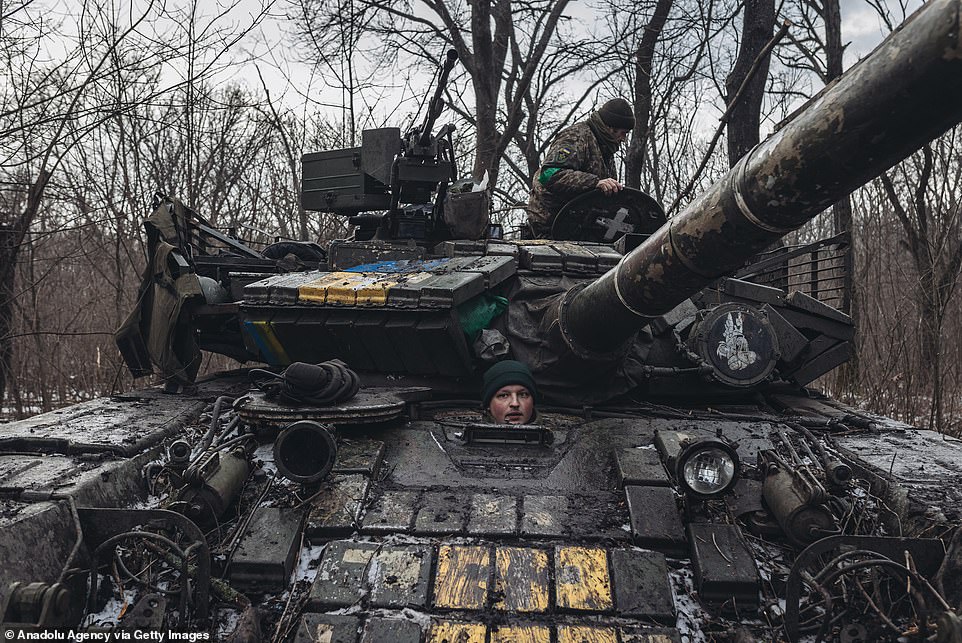 Michel hailed the Ukrainians ‘fighting for their land, they are fighting for their future and the future of their children.’ ‘But we all know that they are also fighting for our common European values and principles, and also for the promise of the European Union peace and prosperity,’ he added. ‘They need and they deserve our support.’ On Wednesday, a helicopter carrying Interior Minister Denys Monastyrsky crashed next to a kindergarten and a residential building in Brovary, a commuter town for the capital Kyiv that was the scene of fierce fighting with Russian forces last year. Fourteen people were killed, including Monastyrsky, other ministry officials and a child, Zelensky said in his evening address to the nation. Another 25 people were wounded, including 11 children. ‘Minister Denys Monastyrsky, (his deputy) Yevhen Yenin and their colleagues who died in the crash are not people who can be easily replaced,’ Zelensky said. ‘It is a truly huge loss for the state. My condolences to the families.’ 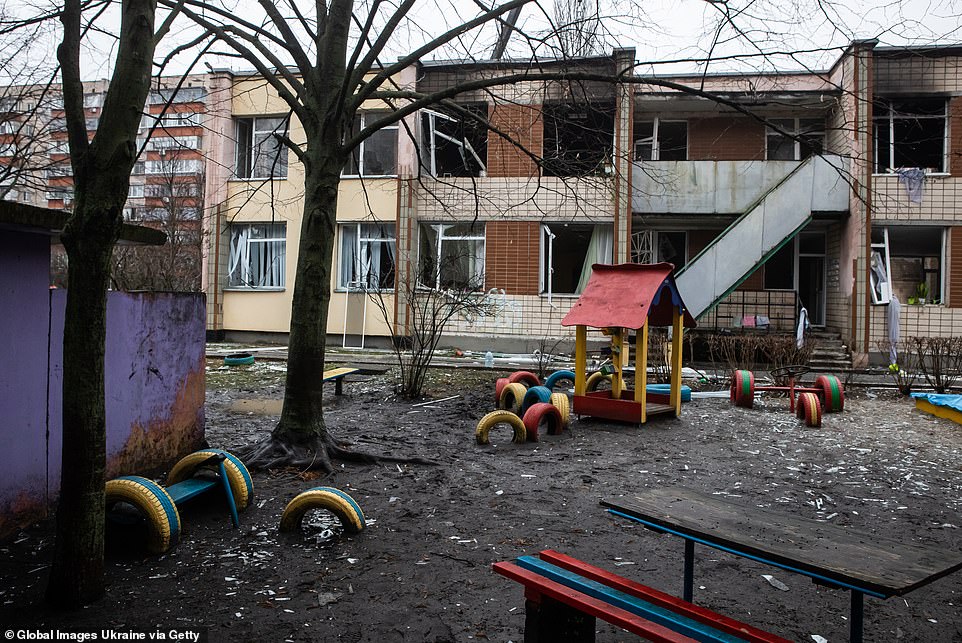 Dmytro Serbyn, who was in his apartment when the helicopter crashed, rushed to help children as soon as he saw flames billowing over the kindergarten. ‘They were looking for their parents, children were crying… their faces were cut and covered in blood,’ Serbyn told AFP. ‘We pulled out one girl. I wrapped her in a jacket, her face was wounded… She did not tremble, did not cry.’ The child, Polina, was so badly injured that her father did not immediately recognize her, Serbyn said. Amateur footage circulating on social media in the immediate aftermath captured cries and a large blaze. It was not immediately clear where the helicopter was going. The presidency said it was headed to frontline regions, while Kyiv Mayor Vitali Klitschko said it was flying to a missile strike site in Dnipro. 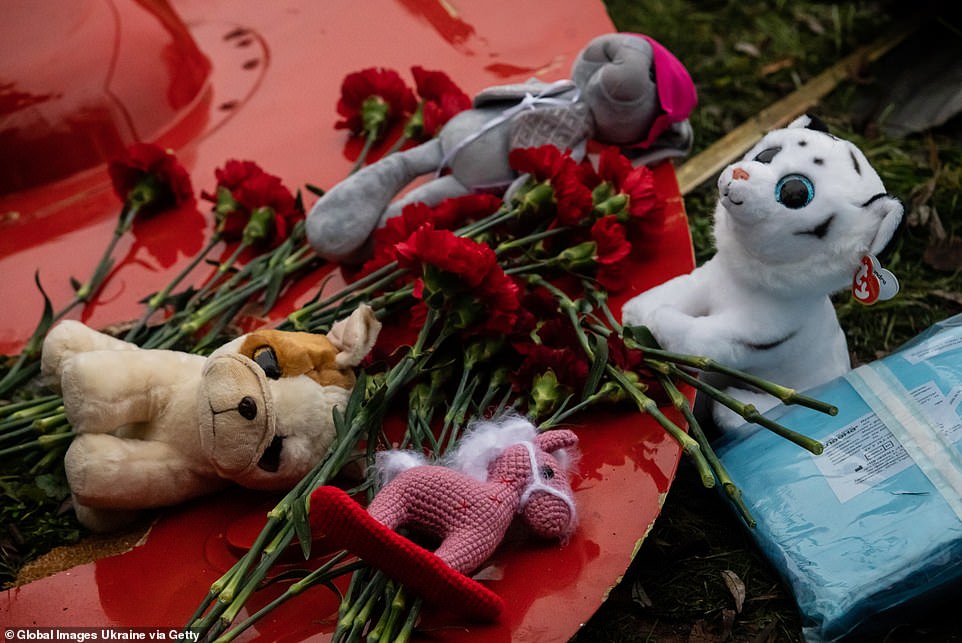 Zelensky said information on the circumstances of the crash would be made available ‘as soon as clear facts are established.’ U.S. President Joe Biden said in a statement it was a ‘heartbreaking tragedy,’ calling Monastyrsky a ‘reformer and patriot.’ ‘We don’t have any notion right now as to what caused that crash,’ U.S. National Security Council spokesman John Kirby told reporters. Britain said: ‘Ukrainians will continue to be collateral (victims) as long as (Russian President Vladimir) Putin continues his needless war. Berlin, meanwhile, ‘offered Germany’s support in identifying the causes of the helicopter crash.’ Klitschko paid homage to Monastyrsky as a ‘young, very creative, good person… always proactive in supporting and defending the lives of our citizens.’ The 42-year-old, a trained lawyer, had served as Ukraine’s interior minister from July 2021. He was a key member of Zelensky’s party and was married with two children. Aviation accidents are fairly common in Ukraine. 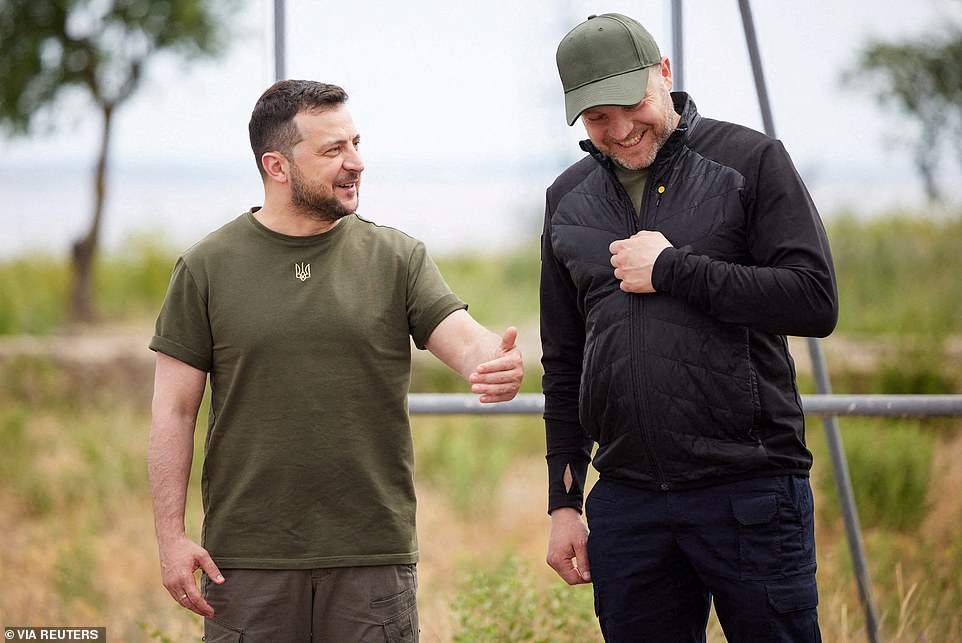 In one of the deadliest recent incidents, 26 people, most of them air cadets, were killed when their plane crashed near the eastern Ukrainian city of Kharkiv in September 2020. The town of Brovary is located some 20 kilometers (12 miles) northeast of Kyiv and was among the urban hubs around the capital that Russian troops had tried to capture after invading Ukraine last year. Meanwhile, in Moscow Russian Foreign Minister Sergei Lavrov likened Western policies on Russia to Nazi leader Adolf Hitler’s ‘Final Solution’ plan of genocide against Jewish people. ‘The task is the same: the final solution of the ‘Russian question.’ Just as Hitler wanted to finally solve the Jewish question,’ Lavrov said. Canada’s Foreign Ministry summoned the Russian ambassador to protest what it called Lavrov’s ‘anti-Semitic comments’ as well as to condemn a recent Russian strike on a residential building in Ukraine’s Dnipro that killed at least 45 people. Pictured: Zelensky and Denys Monastyrskyi during a visit to a training base of the National Guard, in Odesa region, Ukraine June 18, 2022.