With the score poised at 1-1 in Sunday’s Madrid derby in La Liga between Real and Atletico, Cristiano Ronaldo’s number appeared on the fourth official’s electronic board in red and the crowd in the Santiago Bernabeu fell silent.

Real Madrid coach Zinedine Zidane took off the Portuguese forward for Karim Benzema in the 64th minute. Even though his careful management of Ronaldo’s minutes has become increasingly obvious, it is still jarring to see him removed.

With Ronaldo off the pitch, rested ahead of Wednesday’s Champions League quarter-final second leg clash in Turin against Juventus, the game petered out.

‘Cristiano is Cristiano, he has been this player all his life, scoring 50 goals a season. It is true that there is nobody else who does that,’ said Zidane after the game.

‘But others can score, have done recently, and we must think about the positives. It’s better to have Cristiano with us.

‘It was just (to rest him). We have many games, that’s it. Sometimes he needs to rest. These days he needs that. He feels better every day, you can see it.’ 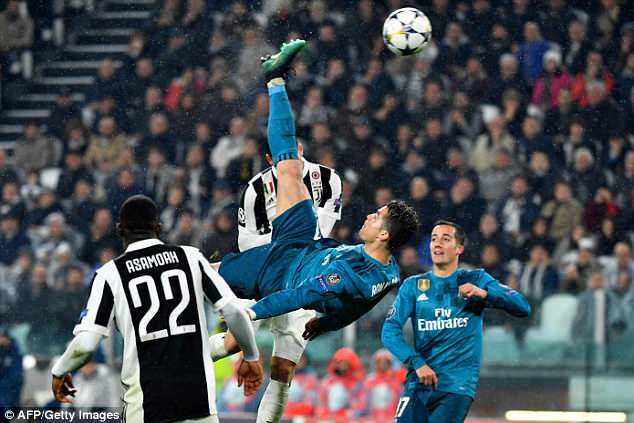 Although Real, fourth, have no hope of catching league leaders Barcelona, who are 15 points ahead, Ronaldo’s substitution effectively appeared as Zidane giving up on the game, considering his goalscoring influence.

Ronaldo’s goal against Atletico was his 24th in his last 13 matches across all competitions, and the 10th consecutive match in which he has scored.

Madrid are dependent on Ronaldo’s goals and Zidane has taken to resting him completely in some league games, leaving him out of trips to Leganes, Espanyol and Las Palmas recently.

Ronaldo has been substituted by Zidane in five games since the mid-season break, with the coach convinced he needs to keep the 33-year-old forward in good condition for the defence of their Champions League title.

It was Ronaldo’s two goals, including a spectacular scissor kick, that helped Madrid earn a 3-0 first leg lead over Juventus and the veteran will look to benefit from his extra rest in Italy this week to send his side through to the semi-finals.