Zika-carrying mosquitoes can be tested with smartphones

Mosquitoes could be tested using smartphones to identify their risk of carrying common but deadly diseases, thanks to a tool invented by scientists.

The Aedes aegypti species of mosquito is known for passing the Zika virus, dengue fever and yellow fever to humans – all of which can be fatal if not properly treated.

But researchers have found a cheap and easy way to screen the dead bugs to see if they belong to that species.

The technology can also be used to test whether the mosquitoes have been affected by a pesticide which health agencies are using to try and stop them spreading disease.

The device was built to make it easier to track where dangerous mosquitoes are breeding and to test whether anti-virus efforts are working.

Once a dead mosquito has been put into the LAMP OSD device, the tool can be plugged into a smartphone to produce a simple yes/no verdict on whether the bug is the Aedes aegypti species which is well known for carrying deadly diseases

Scientists at the University of Texas at Austin say they can test a mosquito’s DNA using a smartphone camera, a small 3D-printed box and a chemical test.

They could use their 97 per cent accurate device, called a LAMP OSD, to replace the complicated removal of insects’ DNA and expensive lab testing.

And they can see whether a mosquito-control strategy called Wolbachia is working by revealing if the mosquito has come into contact with it.

Wolbachia works by infecting mosquitoes with a pesticide which prevents them from spreading infectious diseases like Zika and dengue.

It is used around the world and in 20 US states.

The Aedes aegypti bugs are responsible for disease infecting around 100 million people worldwide each year and for a tripling of mosquito-borne disease in the US since 2004.

WHY DO MOSQUITOES BITE SOME PEOPLE AND NOT OTHERS?

Around 20 per cent of people are more prone to mosquito bites.

And while scientists are yet to find a cure, they do have some ideas as to why the insects attack some of us more than others.

Research has shown that people who have Type O blood – the most common blood type – tend to get bitten twice as much as those with Type A.

Strenuous exercise causes higher body temperatures and a buildup of lactic acid, which emit yummy signals to the insects.

A cold glass of beer makes you sweat and your body release ethanol, which may be why mosquitoes like to land on beer drinkers.

Levels of bacteria on the human skin can entice mosquitoes to bite, particularly where bacteria clusters like on the ankles and feet.

Mosquitoes use even the faintest of human body odours when searching for potential victims.

Researchers from the University of California Riverside discovered the blood-sucking insects use sensors to detect body odours – especially the smell of feet.

Study author Sanchita Bhadra said: ‘Many of these diseases are spreading in areas where they weren’t common before.

‘Having surveillance is important in conjunction with any kind of outbreak, and this method allows a rapid test in the field.’

Public health groups already trap, kill and test mosquitoes but have to use longer, more costly methods which are less accurate.

Current testing involves using highly trained staff to extract DNA from undamaged mosquitoes and testing it to work out the species and look for traces of Wolbachia.

But the LAMP OSD test can be done anywhere and involves mixing a mosquito sample with chemicals which then glow inside the device to indicate the species and presence of Wolbachia – this can then be pictured with a smartphone camera to make a permanent record.

It is not clear how fast the process is but researchers described it as ‘rapid’.

‘This test can happen without involving a lot of staff and equipment to make sure Wolbachia is effective and spreading as anticipated,’ Ms Bhadra added.

The team are now working on a similar test to determine whether mosquitoes are carrying viruses like Zika, dengue and yellow fever.

The research was published in the journal PLOS Neglected Tropical Diseases.

The experiment started in 2014, with scientists infecting mosquitoes with Wolbachia bacteria, a pesticide which prevents them from spreading the dengue virus.

Four million of the bugs were released across Townsville over two years. 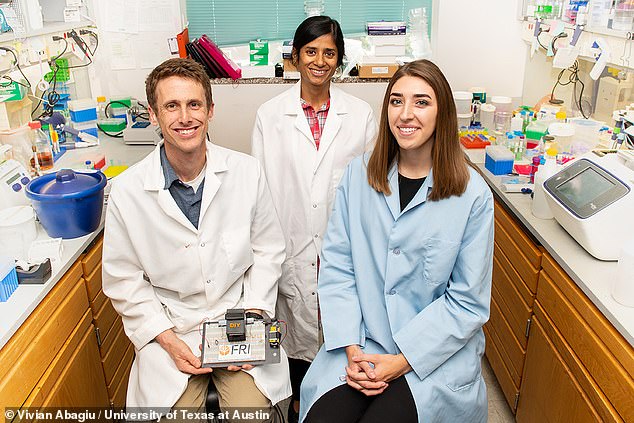 Researchers Timothy Riedel, Sanchita Bhadra and Nicole Pederson developed the device and hope it will save health agencies time and money in monitoring their efforts to control mosquito-borne diseases

These mosquitoes then mated with wild species, passing on Wolbachia so their offspring also carried the bacteria.

Four years on, no cases of the infection have been recorded since in the Queensland city, which has around 167,800 residents, compared to 54 in the previous four years.

This is the first time modified mosquitoes have wiped out such a virus across an entire city.