Zlatan Ibrahimovic is usually fierce and intimidating on the pitch but even he couldn’t help crack a smile as little seven-year-old Malea Emma let out a stunning rendition of America’s national anthem.

The 25,000 in attendance in the StubHub Center were left shocked as the little girl unleashed her surprisingly powerful voice and performanded a beautiful version of Star Spangled Banner before LA Galaxy took on Seattle Sounders.

Ibrahimovic, a father of two himself, could be seen smiling from ear to ear throughout the performance and gave a rousing round of applause afterwards. 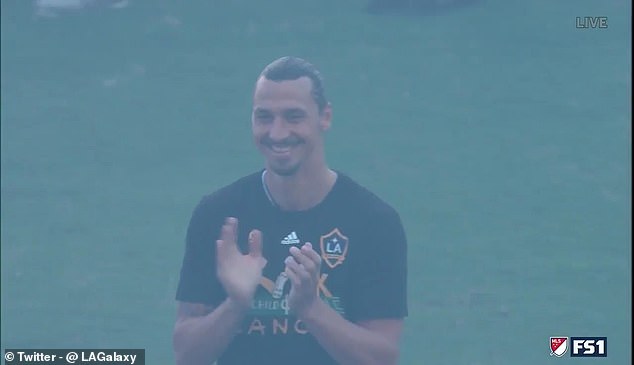 The little singer wasn’t put off by the massive fireworks set off during the opening ceremony and there was even more entertainment on the pitch as LA Galaxy took on Seattle Sounders in the MLS.

Ibra, clearly spurred on by the show, opened the scoring after just nine minutes, slotting in from the penalty spot after forward Ola Kamara was brought down in the box.

The Swede was then heavily involved in the second, combining with Romain Alessandrini to set up Kamara for a goal of his own to give Galaxy a 2-0 lead by half time.

Despite his impressive showing, Zlatan took to Twitter to congratulate title starlet Emma and called her the ‘MVP of the game.’

Galaxy went on to kill the game off shortly after starting the second half as just 52 minutes in, Emmanuel Boateng scored to make the score 3-0 thanks to another assist from Alessandrini.

It was sweet revenge for Galaxy who had lost 5-0 to Sounders earlier in the season. They now sit six points behind Seattle with their playoff hopes revived after a dismal seven-game winless streak.