Zoe Hardman cut a stylish figure in a full black ensemble on Sunday as she made her way to Global Radio studios in London.

The presenter, 38, looked sensational in a black midi dress as she strutted the streets of the capital.

She kept her outfit on trend with a pair of black biker boots and added a leather jacket for a touch of grunge. 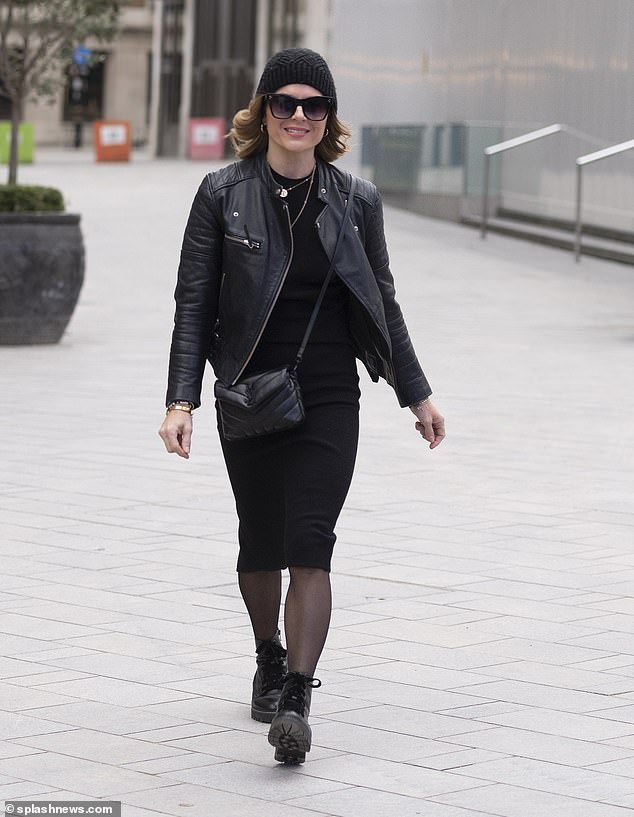 Easy like Sunday morning: Zoe Hardman cut a stylish figure in a full black ensemble on Sunday as she made her way to Global Radio studios in London

Zoe sported tights to keep herself warm and added a black beanie hat for an extra cosy touch.

The Heart Radio host proved she has expensive taste as she draped a quilted Yves Saint Laurent clutch bag across her torso.

She kept her accessories simple and added some layered chains and a good hoop for a touch of bling.

She styled her caramel tresses in glamorous loose waves, and she enhanced her visage with a slick of make-up beneath large shades. 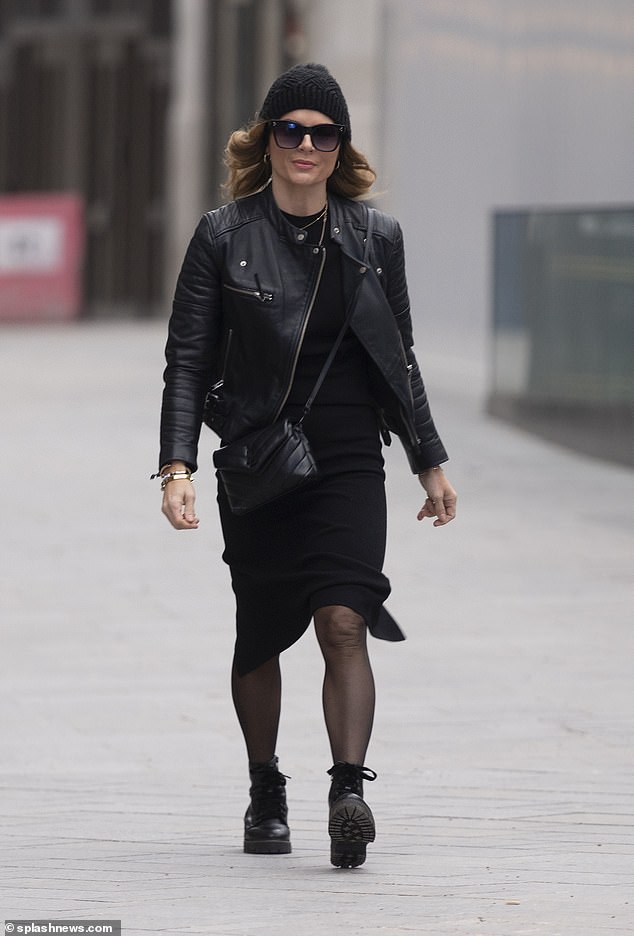 Biker chic: The presenter, 38, looked sensational in a black midi dress and black leather jacket as she strutted the streets of the capital

Last year Zoe spoke candidly about her eating disorder and  revealed the turning point was when a doctor told her she was ‘going into sort of kidney failure’.

The presenter explained that suffering with anorexia made her ‘dead for a really long time’ and ‘a shell of a person’ throughout her 20s.

Speaking to Frankie Bridge on her Open Mind podcast, Zoe said she went to the doctor for pain in her lower back, thinking she was doing something wrong in the gym and had pulled a muscle.

The presenter said: ‘When I went to see the doctor, she basically told me that I was going into sort of kidney failure. It was my kidneys because I was just lacking in everything.’

Zoe also revealed that she hadn’t had a period for five years, but at the time didn’t realise it was because she was starving. 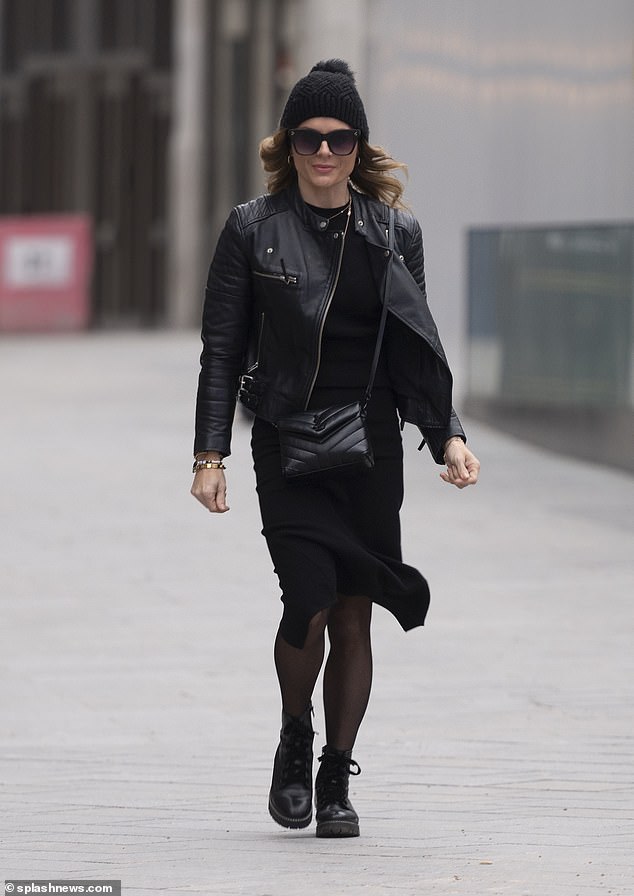 Stunning: The Heart Radio host proved she has expensive taste as she draped a quilted Yves Saint Laurent clutch bag across her torso

She said that her menstrual cycle stopped, her bones ached and her hair was falling out.

The mother-of-two added that the doctor told her she was ‘only heading in one direction’ and that, if she wanted to have children, she had to stop restricting food.

The Playing It Straight presenter said her eating disorder started as a way to control areas of her life where everything else was out of control.

Zoe said: ‘I think coming off the back of Playing It Straight, which did really well, I then got an agent and I was sort of thrust slightly into people recognising me and I was just a bit of a naive girl.

‘I think what happened was that part of my life I could control so I was going to the gym twice a day and writing down everything I was eating.

‘It became apparent over the following years that’s what it was but obviously in the midst of it you’re in denial and you’re denying it to everybody else.’

The TV personality admitted she made the mistake of reading what people were saying about her on Playing It Straight, with a host of comments calling her ‘plump’ or saying the show had ‘picked a size 10’.

The radio host also said that she has lost out on job opportunities for not being ‘a real mum’, which she attributes to her weight and being a size 8.

The mother-of-two said she is careful of what she says around her step-daughter Isla, seven, and daughter Luna, four, and keeps conversations surrounding food happy and positive.

For help and support with eating disorders contact SEED on (01482) 718130 or visit www.seedeatingdisorders.org.uk 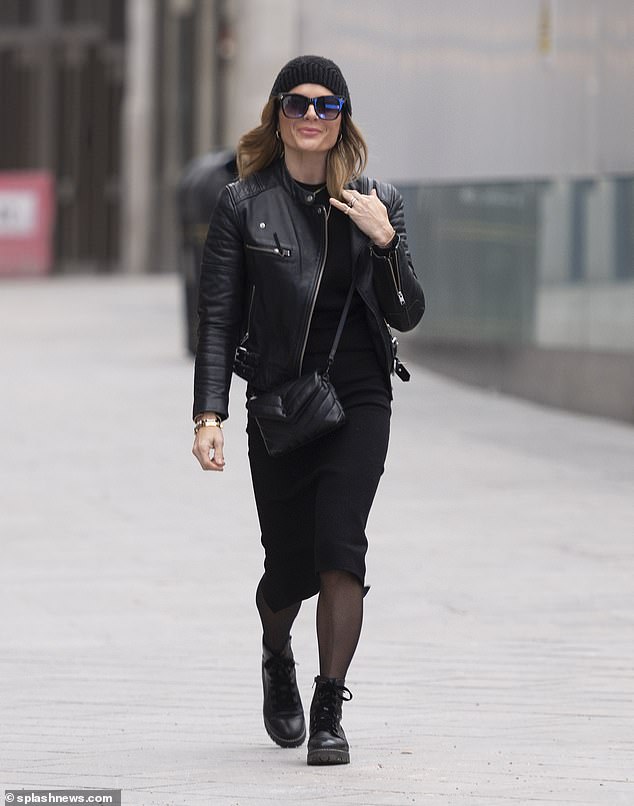 Fashionista: She kept her outfit on trend with a pair of black biker boots and kept herself warm in a black beanie hat