Zoe Saldana and her husband Marco Perego Saldana have spent the past few months making the most of California’s idyllic weather.

On Sunday, the avid beachgoers spent yet another day on the water with their family as they wore wetsuits for a surf session.

The 42-year-old Avatar actress and her 41-year-old husband flexed their athleticism as they suited up to ride some waves in Malibu before sharing a kiss.

Surfs up: Zoe Saldana, 42, and husband Marco Perego Saldana, 41, wore wetsuits for a day of surfing at the beach in Malibu on Sunday

The actress opted for a short-length wetsuit as she showed off her toned figure in the water.

The effortless stunner went au naturale sporting a makeup-free face with her long brown locks tied back in a bun.

Her husband of seven years sported a full black wetsuit as he carried the colorful shortboard that the pair appeared to be sharing. The Italian producer looked every inch the surfer dude as he let his flowing wet locks hang loose.

In between riding the waves the couple packed on the PDA with a sweet smooch. 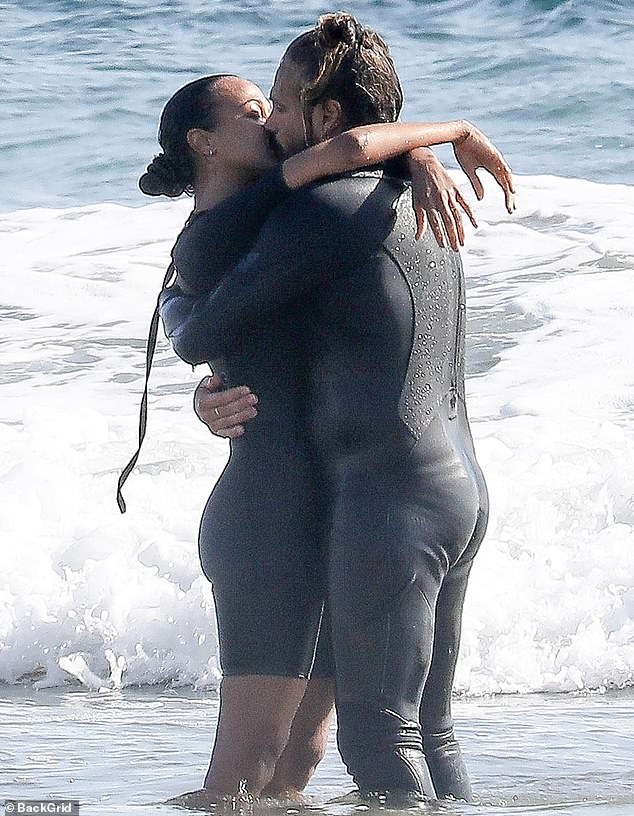 Wet embrace: The couple of seven years held each other in their arms, locking lips in the ocean after taking turns riding the waves 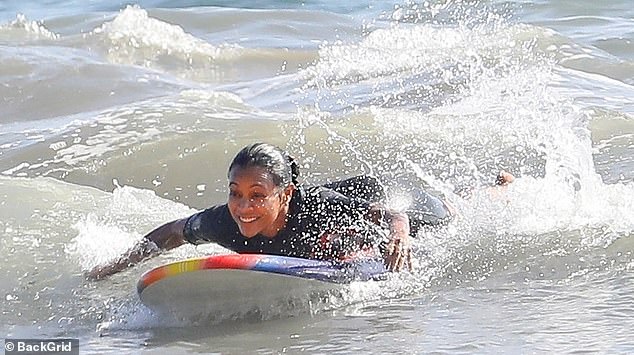 Beach babe: The Avatar star looked enthralled to be on the water as she paddled out, before catching a wave that took her to shore

Marco, who famously took Zoe’s last name upon marriage, embraced his loving wife as he held her close.

The pair who share three children together: five-year-old twins Cy Aridio and Bowie Ezio and three year old Zen. They still seem very much in love.

The Guardians of the Galaxy star looked enthralled to be on the water as she paddled out, before catching a wave that took her to shore.

Zoe looked straight out of Blue Crush as she laid atop the board with a big grin on her face while her family looked on. 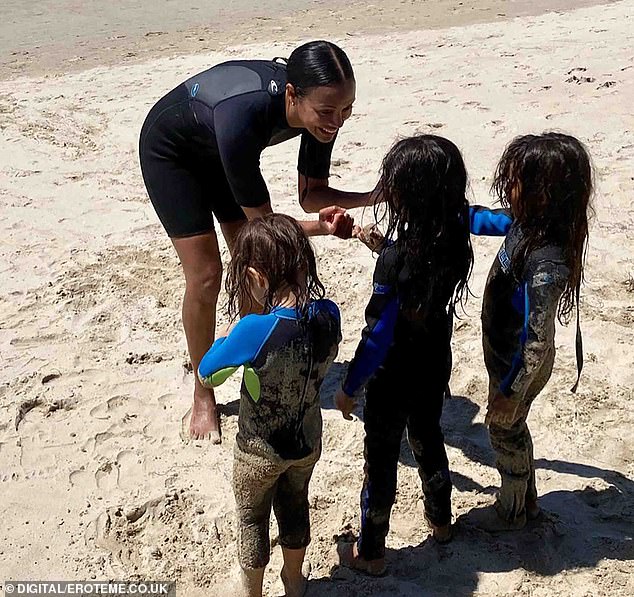 Malibu mom: Zoe and her three children, twins Cy Aridio and Bowie Ezio, five, and three year old Zen go to the beach multiple times a week. The actress and her husband have chosen to raise their children in a gender neutral household 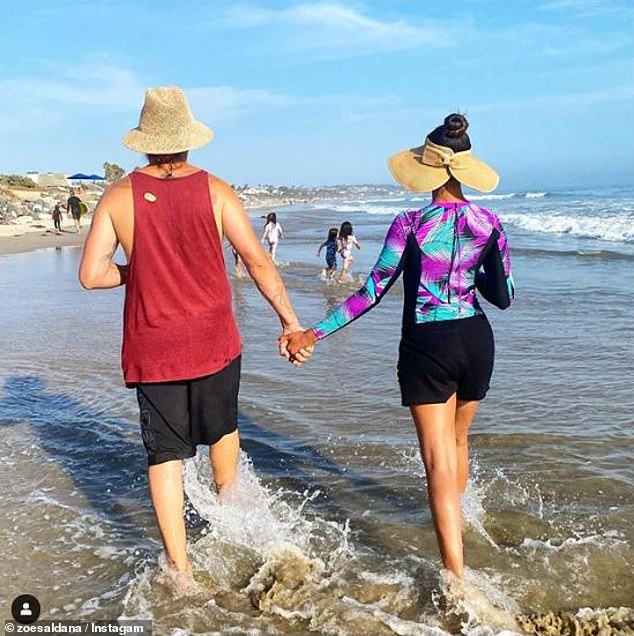 Progressive family: The Guardians of the Galaxy actress has revealed in the past that she and her husband do not perform traditional gender roles at home as an example for their children

She laughed with her supportive partner as they goofed around in the water, prioritizing fun over any level of competition.

Zoe and her husband, who each took each other’s last names upon marriage, have a very progressive approach when it comes to raising their three children.

In an April 2019 interview with US Weekly, the Avatar actress revealed that she and Marco raise their sons in a gender-neutral household.

Part of the way they structure their lives is by making sure the children have both male and female toys, while ensuring that she Marco do not perform traditional gender roles at home. 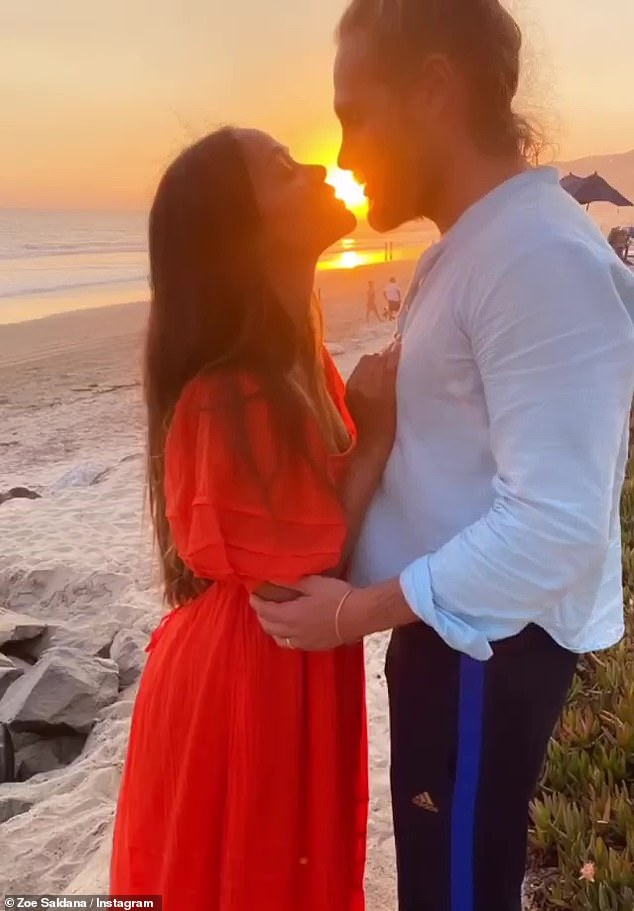 Labor of love: Zoe and Marco spent Labor Day weekend at the beach as they posted a series of sweet family snaps to social media

First speaking out on the subject in 2018, Zoe said ‘I get to do a lot of male things, which is, I don’t know, put the TV together, fix things that break’ adding ‘I think it’s important to raise boys in that environment, and girls as well.’

When it comes to her career, Zoe has been very busy despite COVID-19 restrictions.

The actress is not only gearing up for her reprisal role as Neytiri in James Cameron’s Avatar 2, but is also preparing for the launch of her Adidas x Kohl’s collection which hits stores nationwide on September 30th. 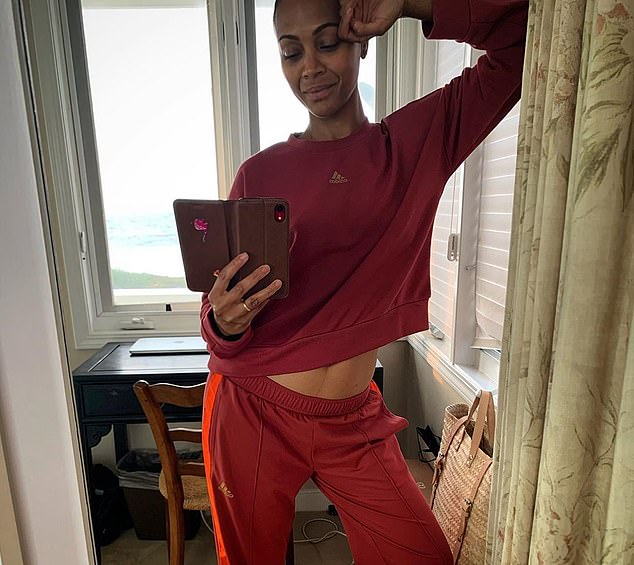 Fall goals: Zoe posted a mirror selfie last week in a maroon  Adidas set. The post comes just a few weeks away from the launch of her Adidas x Kohls collaboration which hits stores on September 30

Teasing the anticipated drop on her Instagram, the Dominican and Puerto Rican actress spoke out about the importance of wellness in her life as she announced the collaboration a few weeks back.

‘One of the most important aspects of my life has been exercise. It keeps me healthy and happy both physically and mentally’ she said.

Zoe has spoken out in the past about her disdain for long workouts, instead optioning 20-30 minutes of exercise that keep her going while on set for 16-hour days.

The actress and her husband who are both in the industry prefer more engaging ways of staying in shape like going for walks or spending time on the water.

Marco’s film Keyhole Garden which stars Zoe is currently in post-production though no news of a release date has been shared. 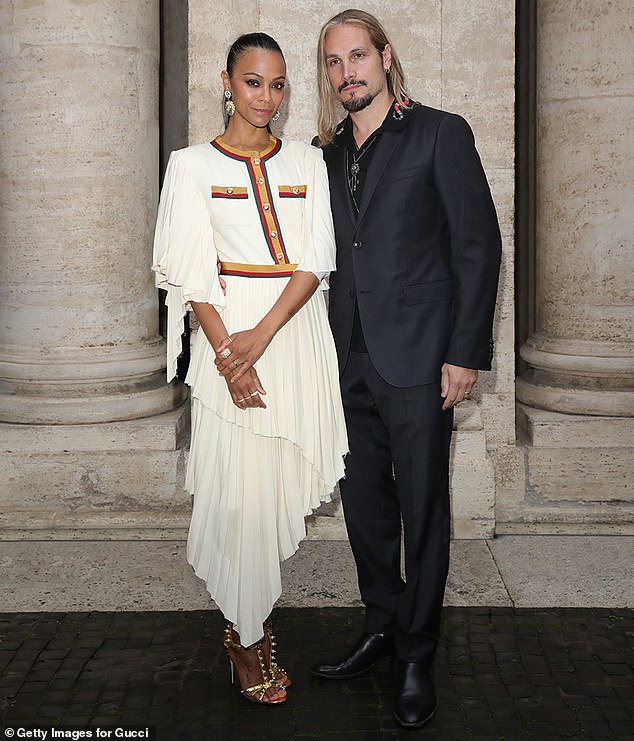 Keyhole Garden: Marco’s film Keyhole Garden which stars wife Zoe is currently in post-production. The immigration-centric love story has not shared a release date at this time; seen in 2019