Zoopla asks is your home ‘earning’ more than your salary?

A fifth of homes in Britain have increased in value by more than the average salary in the past 12 months, a new report claims.

The average worker took home £30,500 in the past year, but 21 per cent of homes in Britain ‘earned’ more than this amount.

It is the latest evidence of a red-hot property market that has bounced back following a shutdown at the beginning of the pandemic, with the help of pent-up demand and a stamp duty holiday.

In Hastings, East Sussex, 62 per cent of homes increased in value more than the average local salary of £25,800 in the past year 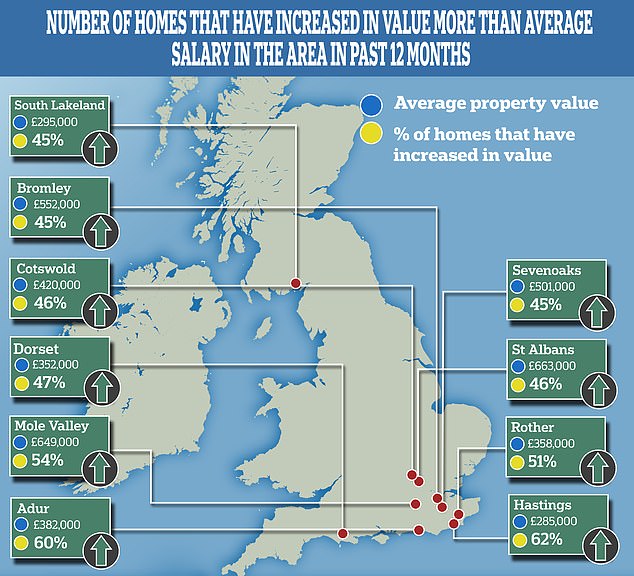 Homes in the South West are most likely to be earning more than the average salary in the region, according to property website Zoopla

The research by property website Zoopla revealed that the equivalent of 4.6million properties across the country have risen in value by more than the typical annual pay.

Zoopla compiled the research using its monthly house price estimates for every home in the country and ONS data. It found that homes in the South West are most likely to be earning more than the average salary in the region.

In the past 12 months, 29 per cent of homes in the region increased in value by more than the average regional salary, which currently stands at £29,000.

Homes in the South East are the second highest top earners compared to the average salary. In that region, 28 per cent of properties increased in value by more than the average regional salary of £32,900 in the past 12 months.

London may have sky-high property prices but comes third on the list due to its higher than average salaries.

Nearly a quarter of homes in the capital – at 2 per cent – went up by more than the average London salary of £37,300 in the past year. 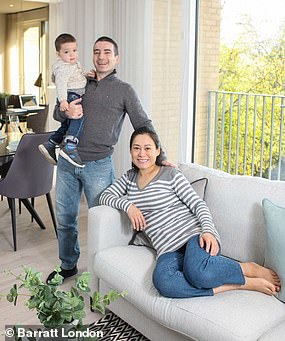 Their home in Hendon has increased in value by a similar amount to Russell’s salary.

Russell said: ‘When purchasing our first home, we wanted to be in an area with lots of greenery, and you simply don’t find that green open space in central London at an affordable price.

‘Hendon was the perfect compromise – right next to the green open space of the Welsh Harp reservoir, yet no more than half an hour on the train to work.

‘We were quite keen on moving into a regeneration area as it helped with our budget, and we did our research, looked at the plans and considered the potential of the whole area, not just what we could see at the time.

‘The decision paid off, because just three years later the one-bedroom flat we had bought for £202,000 was worth £320,000 – mainly due to the boost in prices caused by the regeneration of the area.

‘I’ve even worked out that the amount we earned on our apartment is close to my salary and this enabled us to purchase a larger two-bedroom apartment in the same development for £465,000.’

‘It’s a great feeling when you see the prices going up when you have bought at an early stage,’ he said.

‘But you do have to have a careful eye. You need to be able to see ahead, look at the plans and what is there in the pipeline and try to visualise the end product. When you move in at the beginning of a development you have to be prepared for a bit of inconvenience along the way.’

Despite homes in the North and Midlands rising less in monetary terms than their Southern counterparts, the lower house prices in these regions and the pace of house price growth means a notable proportion of homes are still rising at a higher level than local salaries, according to Zoopla.

In Scotland, the figure is 9 per cent, while in Wales it is 22 per cent.

Home values in some commuter hotspots have also outperformed local salaries during the past 12 months.

In Mole Valley, Surrey, 54 per cent of homes increased more than the average local salary and in St Albans, that figure stands at 46 per cent. 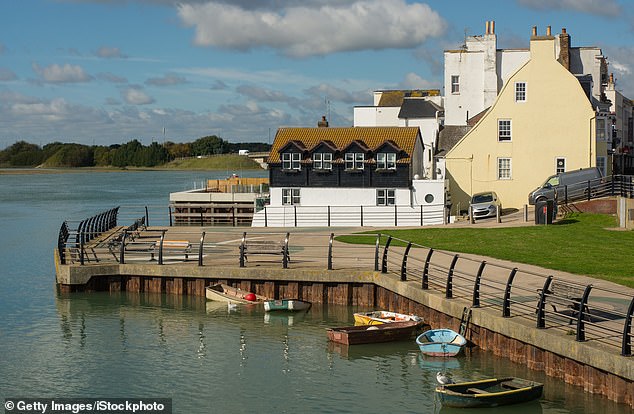 In Adur, Sussex, 60 per cent of homes increased in value more than the average local salary

The shift among some homeowners from urban to more rural living during the pandemic has also resulted in house prices rising faster than local salaries in more rural and coastal areas.

In Hastings, East Sussex, an impressive 62 per cent of homes increased in value more than the average local salary of £25,800 in the past year.

The figure is also high in Adur, in Sussex, at 60 per cent. Dorset saw 47 per cent of homes increase in value by more than the average salary. The figure is 46 per cent in the Cotswolds.

Gráinne Gilmore, of Zoopla, said: ‘There has been strong demand from home buyers since the housing market reopened after the first lockdown in May last year.

‘This demand has been underpinned by people searching for more space, making a lifestyle change or climbing onto the first rung of the property ladder.

‘At the same time, the savings of up to £15,000 on offer as a result of the stamp duty holiday in the 12 months to July also encouraged people to make a move.

‘Hundreds of thousands of households have made the move into their new home over the last year, but activity has been so high, it has eroded the stock of homes for sale, which has put upward pressure on house prices, with values rising by up to 9 per cent in some parts of the country.

‘When this price rise is translated into pounds and pence, it means one in five homes have risen in value by more than the equivalent of a years’ earnings over the space of 12 months.