Facebook CEO and founder Mark Zuckerberg used his platform to pen a rebuttal against the president’s Wednesday morning charge that Facebook was anti-Trump.

On Twitter, Trump had fumed that the social media giant was ‘always anti-Trump,’ suggesting Facebook was in cahoots with the mainstream media to taint his brand. 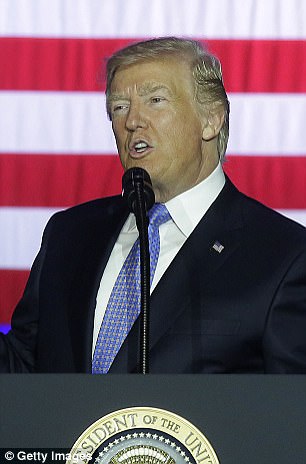 President Trump blasted Facebook Wednesday morning, suggesting the social media platform was ‘anti-Trump.’ His tweets come as Facebook has handed over Russian-linked ads to investigators, some of which promoted Trump, Sen. Bernie Sanders and Jill Stein 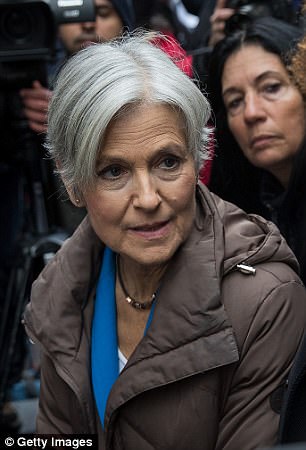 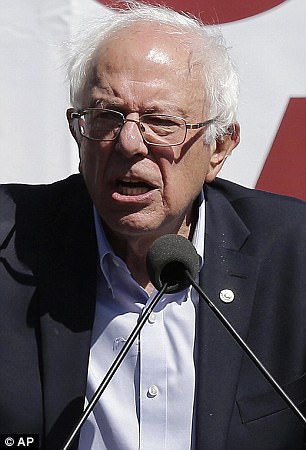 Politico reported that some of the Russian-linked Facebook ads promoted Jill Stein (left), who may have siphoned some votes from Democrat Hillary Clinton, and Sen. Bernie Sanders (right), who ran against Clinton in the primary

‘Virtually no President has accomplished what we have accomplished in the first 9 months-and economy roaring,’ the president added.

Trump’s media grumblings came at the same time Facebook has been scrutinized for selling ads last year to the Russians.

Zuckerberg tried to change the storyline on that Wednesday by saying, ‘the facts suggest the greatest role Facebook played in the 2016 election was different from what most are saying.’

The Facebook boss pointed out that the company’s get-out-the-vote efforts and the fact that candidates could communicate with ‘tens of millions of followers’ every day were good things for democracy.

The social network’s founder also apologized for making light of the ‘fake news’ campaign that was going on within the site’s pages.

‘I made a comment that I thought the idea [of] misinformation on Facebook changed the outcome of the election was a crazy idea,’ Zuckerberg wrote. ‘Calling that crazy was dismissive and I regret it. This is too important an issue to be dismissive.’

‘But he data we have has always shown that our broader impact – from giving people a voice to enabling candidates to communicate directly to helping millions of people vote – played a far bigger role in this election,’ he added.

Politico had more information about some of the Russia-bought ads in a report out today, saying they boosted Sen. Bernie Sanders, I-Vt., Hillary Clinton’s primary opponent, and Jill Stein, the Green Party’s spoiler, along with Trump.

The Stein ad was purchased at the end of the general election cycle.

‘Choose peace and vote for Jill Stein,’ it read, according to Politico’s source. ‘Trust me. It’s not a wasted vote. … The only way to take our country back is to stop voting for the corporations and banks that own us. #GrowaSpineVoteJill Stein.’

Trump’s margin of victory was smaller than the votes Stein received in two key states during last year’s presidential election.

In Michigan, Trump beat Clinton by 10,704 votes, while Stein received 51,463 votes, according to The Hill newspaper, which pulled tallies off the state voting websites.

It’s unclear how many voters saw the Facebook ads, of which the company found that about 3,000 were likely bought by accounts and pages operated out of Russia.

However, they only represented about 1 percent of all election-themed ads on the social media site, costing the supposed Russians about $150,000.

Zuckerberg pointed that out in his Wednesday evening post.

‘Campaigns spent hundreds of millions advertising online to get their messages out even further.’ he noted. ‘That’s 1000x more than any problematic ads we’ve found.’

While some of the ads were riddled with mistakes, Politico’s source said, the fact that they were more nuanced than just pick-Trump-over-Clinton shows an amount of sophistication too.

Facebook had previously noted that the ads didn’t specifically reference the presidential election, but instead ‘appeared to focus on amplifying divisive social and political messages across the ideological spectrum — touching on topics from LGBT matters to race issues to immigration to gun rights.’

Facebook pointed to that statement, written by Chief Security Officer Alex Stamos and released on September 6, when Politico asked for comment about the pro-Stein and pro-Sanders ads.

Last week, Zuckerberg agreed to hand copies of the ads over to Congressional investigators on Capitol Hill.

The Senate Intelligence Committee’s top Democrat, Sen. Mark Warner, D-Va., told CNN this week that the ‘million-dollar question’ is how the Russians knew to target these ads.

‘Did they know this just by following political news in America?’ he mused. ‘Did they geo-target both geographically and by demographics in ways that at least at first blush appear pretty sophisticated?’

‘These are the kind of questions that we need to get answered and that’s why we need them in a public hearing,’ Warner urged.

The Virginia Democrat also noted that it’s ‘too early to tell,’ whether any Trump campaign officials were connected to the ads.

The committee’s chair, Sen. Richard Burr, R-N.C., said there’s ‘no evidence yet’ of collusion between the Russians and the Trump campaign.

‘The social media platforms look to be a tool that were utilized by a foreign power to impact the 2016 elections,’ Burr told CNN. ‘Is there collusion? None that anybody can see.’

I want to respond to President Trump’s tweet this morning claiming Facebook has always been against him.

Every day I work to bring people together and build a community for everyone. We hope to give all people a voice and create a platform for all ideas.

The facts suggest the greatest role Facebook played in the 2016 election was different from what most are saying:

– More people had a voice in this election than ever before. There were billions of interactions discussing the issues that may have never happened offline. Every topic was discussed, not just what the media covered.

– This was the first US election where the internet was a primary way candidates communicated. Every candidate had a Facebook page to communicate directly with tens of millions of followers every day.

– Campaigns spent hundreds of millions advertising online to get their messages out even further. That’s 1000x more than any problematic ads we’ve found.

– We ran ‘get out the vote’ efforts that helped as many as 2 million people register to vote. To put that in perspective, that’s bigger than the get out the vote efforts of the Trump and Clinton campaigns put together. That’s a big deal.

After the election, I made a comment that I thought the idea misinformation on Facebook changed the outcome of the election was a crazy idea. Calling that crazy was dismissive and I regret it. This is too important an issue to be dismissive. But the data we have has always shown that our broader impact – from giving people a voice to enabling candidates to communicate directly to helping millions of people vote – played a far bigger role in this election.

We will continue to work to build a community for all people. We will do our part to defend against nation states attempting to spread misinformation and subvert elections. We’ll keep working to ensure the integrity of free and fair elections around the world, and to ensure our community is a platform for all ideas and force for good in democracy.