Facebook co-founder and CEO Mark Zuckerberg denied knowing that Facebook’s video stats were inflated for more than a year during a Wednesday hearing before a House Judiciary subcommittee.

He had been asked about the scandal by Judiciary Committee Chairman Jerry Nadler, who tore into the Facebook boss because ‘based on these metrics, news publishers fired hundreds of journalists, choosing instead to boost their video division.’

‘Congressman, no I did not and we regret that mistake and we have put in place a lot of other measures since then,’ Zuckerberg said.

Facebook CEO Mark Zuckerberg denied that he knew Facebook was inflating claims of video viewership, which prompted news organizations to lay off writers and focus on video 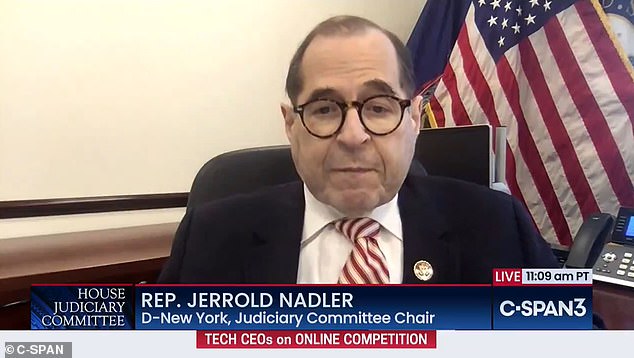 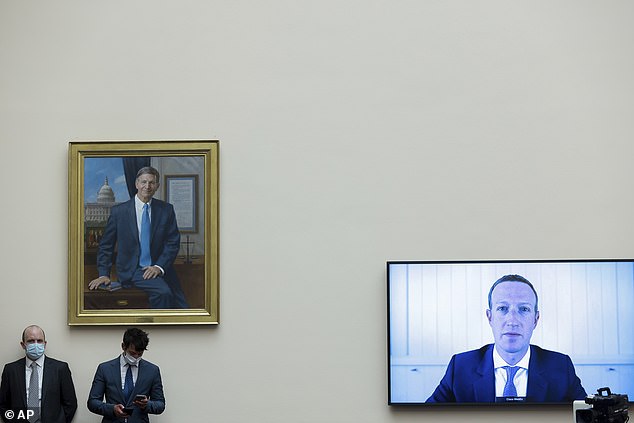 Facebook CEO Mark Zuckerberg appeared at the Capitol Hill Judiciary subcommittee hearing via video chat, as Congress is still doing past of its business virtually due to the coronavirus pandemic

‘What do you have to say to the journalists who lost their jobs due to Facebook’s deception?’

Zuckerberg didn’t, instead replying, ‘Congressman I disagree with that characterization and also your description of what …’

In October 2018, advertisers filed a complaint in California federal court, which was part of a 2016 lawsuit against the tech giant.

The filing, according to reporting from The Wall Street Journal, said that Facebook knew there was a problem in how the company measured viewership of videos on the platform for more than a year before publicly disclosing the issue in 2016.

Plaintiffs in the lawsuit called this fraud alleging Facebook knew of the irregularities by January 2015 and understood the impact within a few months, though didn’t disclose the issue for more than a year.

The 2018 filing was based upon some 80,000 internal documents from the tech company obtained through the lawsuit.

Nadler opened up this particular bit of questioning with Zuckerberg by bringing up the stakes.

‘The news and journalism industry in this country are in economic free-fall, over 200 counties in America no longer have a local newspaper and tens of thousands of journalists have been laid off in recent years,’ the New York Democrat began.

The reason journalism is in free-fall is that Google and Facebook now capture the vast majority of digital ad revenue,’ he continued. ‘Although news publishers produce valuable content, it is Google and Facebook that increasingly profit off that content.’

Nadler then accused Google and Facebook of practicing ‘anti-competitive conduct,’ which was the broader topic of the Wednesday hearing in the subcommittee on Antitrust, Commercial and Administrative Law.

Nadler asked Zuckerberg if he realized the harm he caused journalists around the U.S.

‘Congressman, certainly I know how important it is that the metrics that we report are accurate and we’ve put in place additional measures to make sure we can audit those,’ the Facebook boss said.