Emmanuel Macron demanded tech companies pay their fair share in tax if they want to be part of France’s digital future.

The French President told heavy-hitters including Facebook boss Mark Zuckerberg he favoured ‘tough regulations’ at a summit in Paris on Wednesday.

‘As you know there is no free lunch,’ Macron said to laughter from the executives as he greeted them on arrival at Elysee Palace for the Tech for Good meeting. 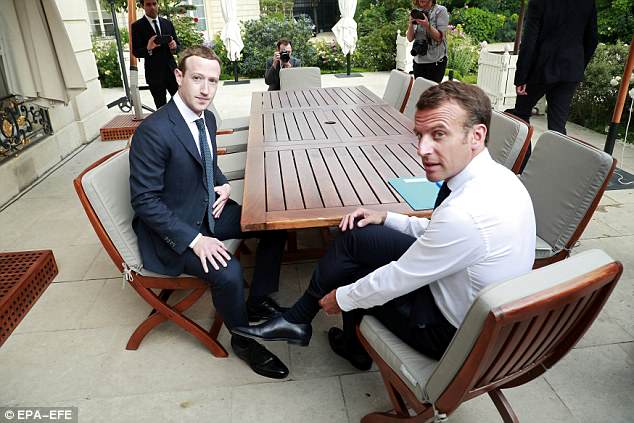 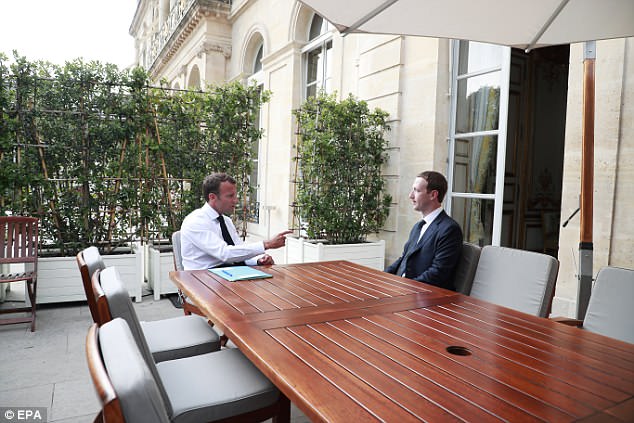 ‘I want commitments from you. I will be direct and open and that’s what I expect from you. Let’s talk very directly about what we can do.’

Mr Zuckerberg needed to understand the widespread concern about the misuse of social media and do something about it, the French leader felt.

‘France defends the idea of tough regulations,’ he said, throwing his support behind a three per cent digital tax on tech companies’ gross revenue in the EU. 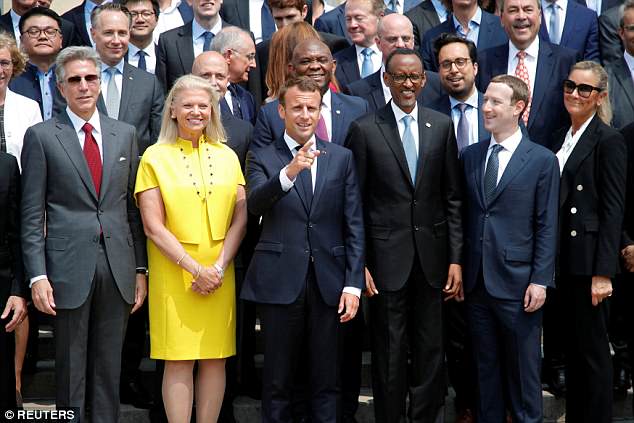 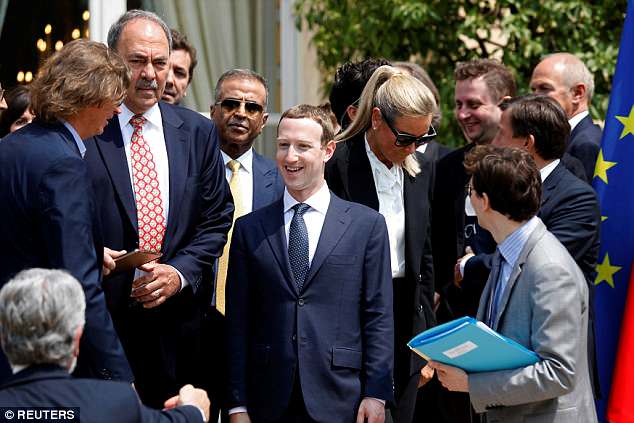 The technophile president said it was ‘crucial’ that internet giants paid their fair share of taxes, and also wanted new regulations to combat terrorist propaganda and cyber-bullying.

President Macron also planned to hit out at behaviour by tech companies he perceived as ‘predatory’ and impress on them the need to improve that perception.

He told the executives business needed to do more in tackling issues such as inequality and climate change.

‘It is not possible just to have free riding on one side, when you make a good business,’ he said.

However, he was upbeat in his remarks as the leader met at the palace, saying he wanted innovation to be a driving force for the French economy.

The French leader paints himself as a champion of France’s plugged-in youth and wants to transform France into a ‘startup nation’ that draws higher investments into technology and artificial intelligence. 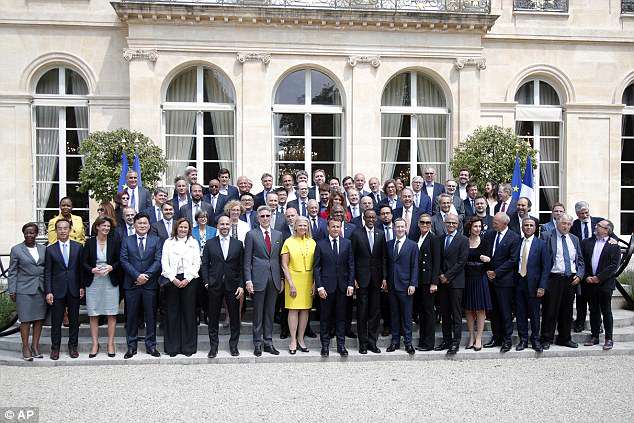 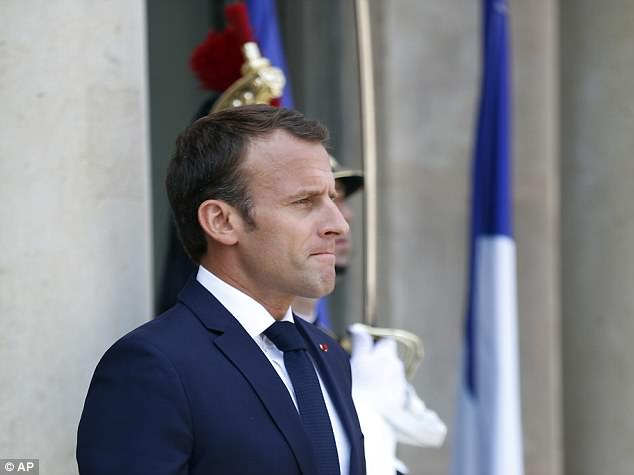 Back in 2014 he even flirted with the idea of becoming involved in an education start-up, before he became a minister in the then Socialist government.

Zuckerberg’s appearance alongside Macron comes after what was meant to be tough questioning by the European Parliament descended into farce yesterday when MEPs asked long winded questions in a format chosen by the Facebook boss.

At the European Parliament, MEPs asked their often long winded questions all at once and Zuckerberg was allowed respond to them at the end.

One MEP, Gabi Zimmer, began her question with a quote from the German philosopher Goethe.

This meant by an hour into the 90-minute hearing in Brussels on Tuesday they were still asking and he was yet to answer a single question. 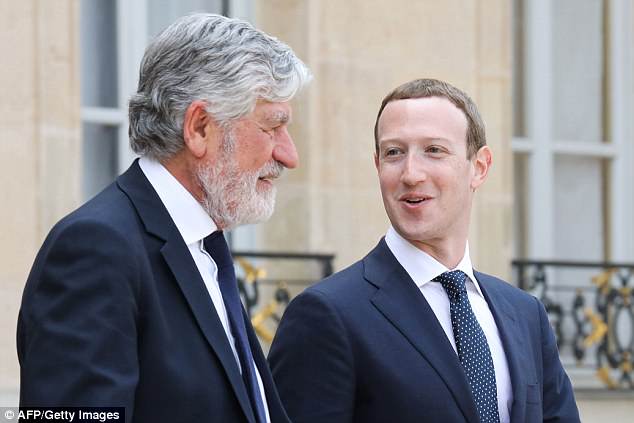 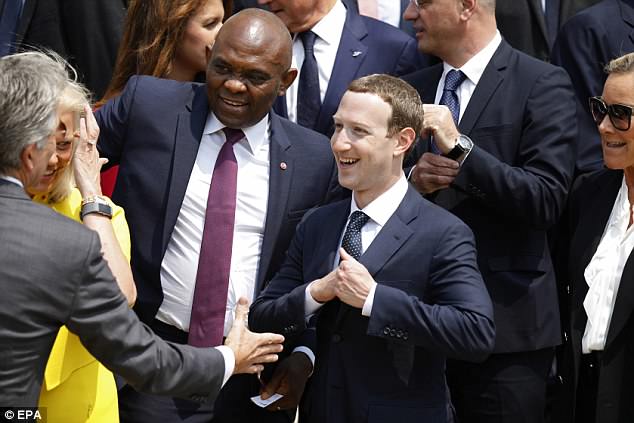 Zuckerberg and Tony Elumelu, Chairman United Bank of Africa, arrive for the picture

Several indignant MEPs tried to get their questions in at the end but were cut off by European Parliament president Antonio Tajani as time was up.

The Facebook chief promised to respond to the questions he hadn’t addressed in writing – before exiting Parliament leaving behind an unsatisfied huddle of MEPs.

‘Today’s pre-cooked format was inappropriate & ensured #Zuckerberg could avoid our questions,’ Guy Verhofstadt, one of the MEPs at the hearing, said afterwards.

‘I trust that written answers from Facebook will be forthcoming. If these are not accurately answered in detail, the EU competition authorities must be activated and legislation sharpened.’ 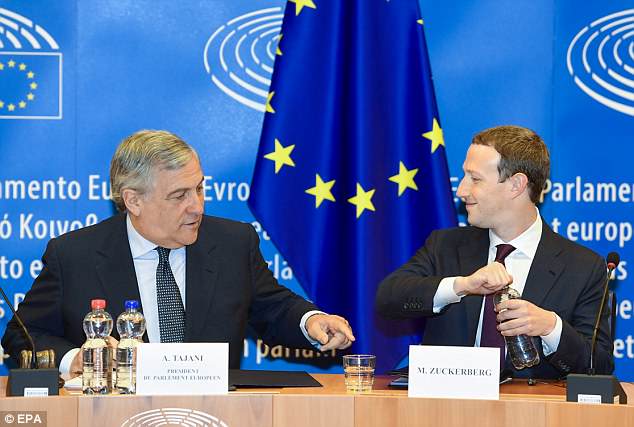 Damian Collins, chair of the British Digital, Culture, Media and Sport committee, said: ‘What a missed opportunity for proper scrutiny on many crucial questions raised by the MEPs.

‘Questions were blatantly dodged on shadow profiles, sharing data between WhatsApp and Facebook, the ability to opt out of political advertising and the true scale of data abuse on the platform.

‘Unfortunately, the format of questioning allowed Mr Zuckerberg to cherry-pick his responses and not respond to each individual point.

‘I echo the clear frustration of colleagues in the room who felt the discussion was shut down.

‘It is time that Mr Zuckerberg agreed to appear in front of the DCMS committee to provide Facebook users the answers they deserve.’