Zurich 1-9 Arsenal: Gunners go goal crazy as Frida Maanum hits a hat-trick to down the Swiss side

Zurich 1-9 Arsenal: Gunners go goal crazy as Frida Maanum hits a hat-trick to down the Swiss side and see Arsenal top their Champions League group ahead of Lyon

The Gunners needed to match Lyon’s result to win Group C after a 1-0 defeat by the French side last week and responded emphatically in the Swiss capital.

Maanum broke the deadlock in the 18th minute and had her hat-trick wrapped up just after half-time, while Caitlin Foord and Stina Blackstenius scored twice.

Kim Little converted a penalty on her return from injury before Mana Iwabuchi rounded out the scoring in the 83rd minute.

Zurich did get the scoresheet themselves after Leah Williamson slipped, accidentally taking out Seraina Piubel in the process.

There was no complaint from the England captain as the referee pointed to the spot and Humm fired home the consolation, just her side’s second goal of the competition. 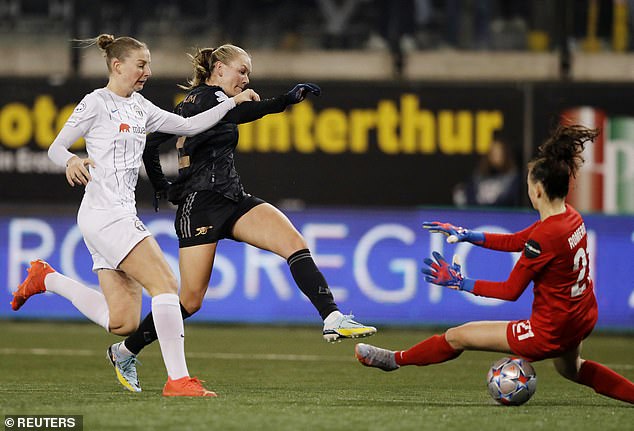 Jonas Eidevall’s side had already booked their trip to the knockout stages, and the head coach was surely encouraged by the attacking display from his Gunners, who have now lost both Beth Mead and more recently Vivianne Miedema to long-term ACL injuries.

Arsenal topped the group by two points from holders Lyon, who drew 0-0 with Juventus in the group’s other tie.

It means the Gunners should be get a kinder quarter-final draw and avoid Spanish champions Barcelona. Although they now need to wait until February 10 to discover who they will play in the knockout stage.