It was announced on Saturday that James Bond legend Sir Sean Connery died in his sleep at his home in the Bahamas aged 90 following a long illness.

Celebrities from across the showbiz world paid tribute to the iconic actor following news of his tragic passing, with many calling him a ‘legend’ and the ‘best ever’ 007 to grace the screen.

Daniel Craig, Hugh Jackman, and Salma Hayek, lead the those sharing gushing messages of farewell to the star, with the No Time To Die star sharing a statement via the franchise’s official Twitter page that read: ‘It is with such sadness that I heard of the passing of one of the true greats of cinema. 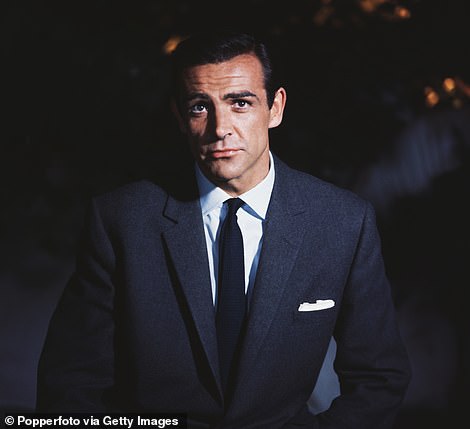 ‘He helped create the modern blockbuster’: 007 Daniel Craig (pictured in Skyfall) led the A-list tributes to iconic Bond Sir Sean Connery (pictured in From Russia With Love) following his death at 90 on Saturday

‘Sir Sean Connery will be remembered as Bond and so much more. He defined an era and a style. The wit and charm he portrayed on screen could be measured in mega watts; he helped create the modern blockbuster.

‘He will continue to influence actors and film-makers alike for years to come. My thoughts are with his family and loved ones. Wherever he is, I hope there is a golf course.’

The Wolverine actor also paid his respects to Connery, writing on Twitter: ‘I grew up idolizing #SeanConnery. A legend on screen, and off. Rest In Peace.’ 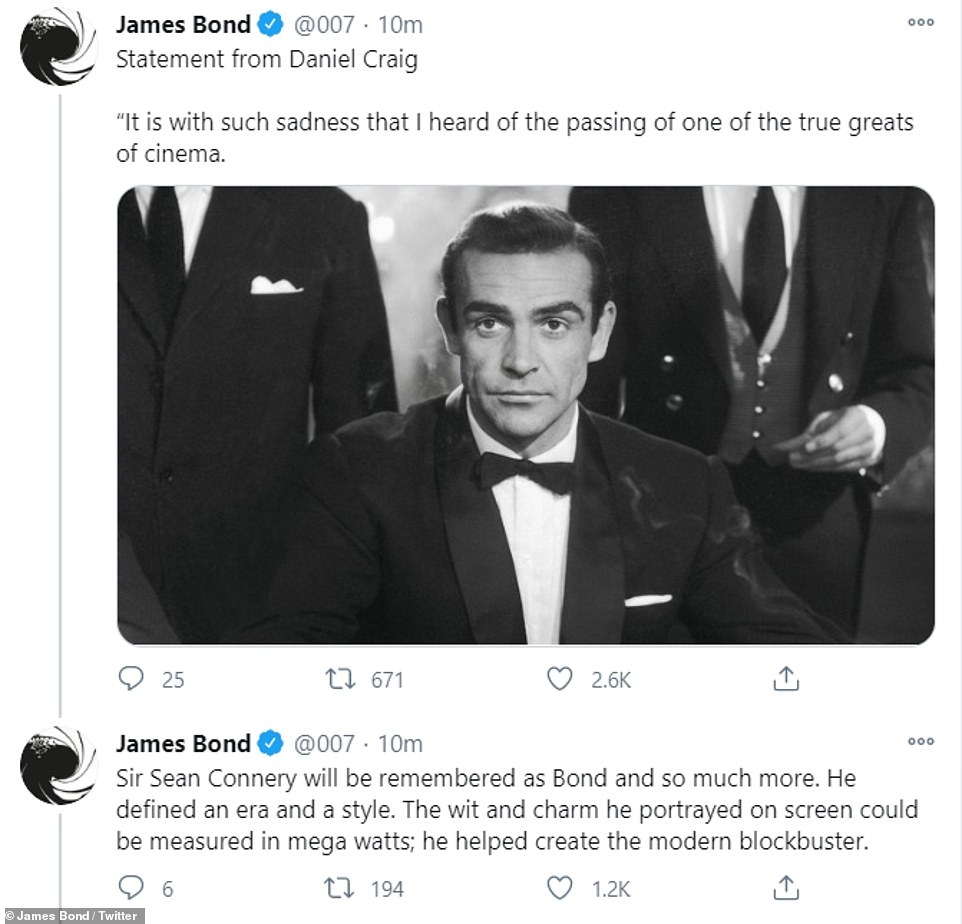 Icon: The No Time To Die star sharing a statement via the franchise’s official Twitter page that read: ‘Sir Sean Connery will be remembered as Bond and so much more. He defined an era and a style’ 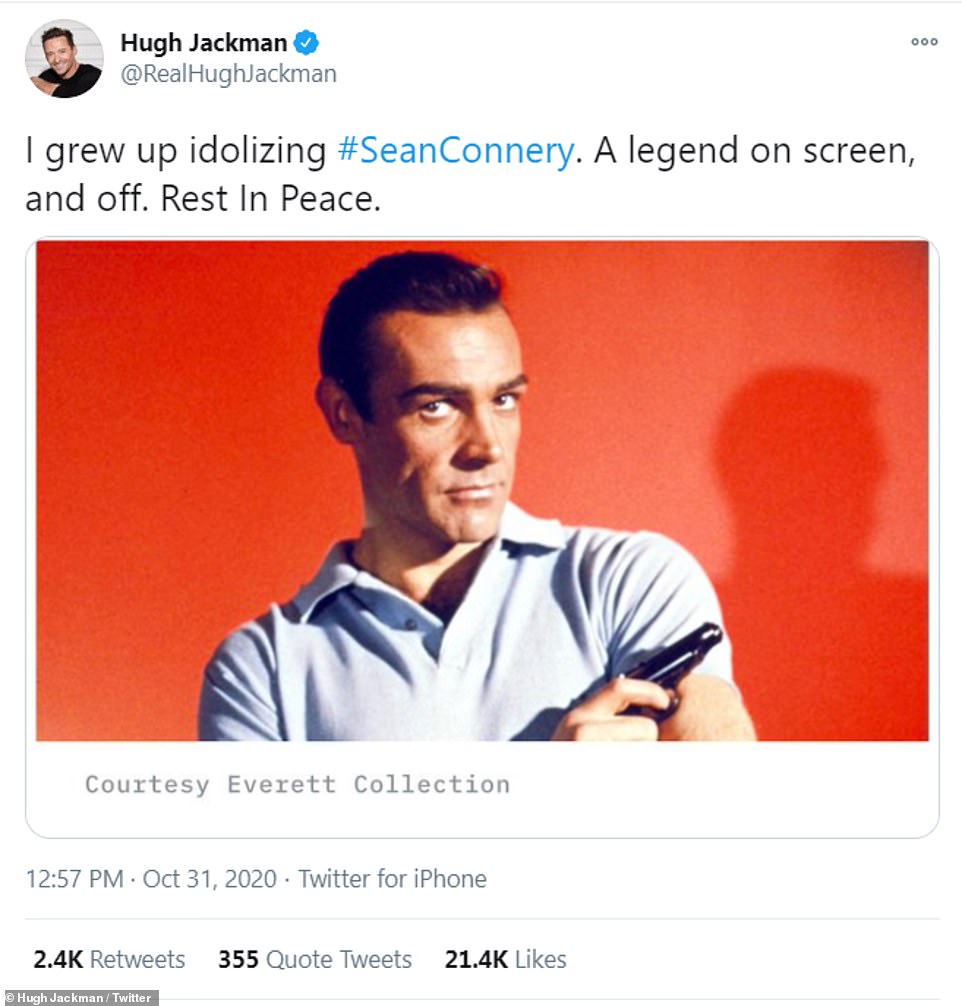 Inspiration: Hugh Jackman also paid his respects to Connery, writing on Twitter: ‘I grew up idolizing #SeanConnery. A legend on screen, and off. Rest In Peace’

Salma shared a snap of Connery looking reflective in a black-and-white snap to her Instagram, saying: ‘It saddens me that today the legendary Sean Connery passed away.

‘At least he lived to be 90. My heart goes out to his close ones. May he rest in peace.’

Elizabeth Hurley took to her social media to share a snap of Connery during his Bond heyday, as he read a book on a yacht while dressed in a pair of shorts, and she gushed: ‘RIP the glorious Sean Connery.’

Star Trek actor George Takei said of the Oscar-winning actor: ‘Sean Connery was a movie legend, even far into his golden years. Our strongest Bonds were formed by him, and he was Untouchable. He passed today at age 90, a suave hero to the end.’

While Sam Neill, who starred with Connery in The Hunt For Red October, reminisced of their time together: ‘Every day on set with #SeanConnery was an object lesson in how to act on screen. But all that charisma and power- that was utterly unique to Sean . RIP that great man, that great actor.’

Director Edgar Wright also paid tribute to Connery, sharing a lengthy tribute which began: ‘It says something for the extraordinary charisma of this Edinburgh lad to have created the most iconic character in film & then, rather than be typecast by it, become equally famous for just being Sean Connery. A real screen legend; oft imitated (by all!) but never equalled.

‘Though all of his Bond instalments are fun and two are among my favs of the series (From Russia With Love & Goldfinger), here are some non Bond Connery films I dearly love; Hell Drivers (a supporting role, but a badass flick), The Frightened City (clearly a dry run for Bond)

‘Hitchcock’s Marnie, Sidney Lumet’s The Hill, The Anderson Tapes & The Offence, the bonkers Zardoz, John Huston’s rollicking The Man Who Would Be King, Richard Lester’s elegiac Robin & Marian, his cameo in Time Bandits, but let’s not forget of course his amazing last act…

‘From charming immortal Ramirez to Henry Jones Sr, from being the rock in the centre of the best Michael Bay film to his incredible Oscar winning turn as Malone in The Untouchables, Sean Connery had a hell of a run. Have a vodka martini & a dram of whiskey for him tonight.’