1,000 complaints for high treason are made against Merkel

More than 1,000 criminal complaints for high treason have been filed against Angela Merkel since the height of the refugee crisis in 2015, it has been reported.

Most of the complaints come from supporters of the right-wing populist Alternative for Germany party, which is poised to win seats in the federal parliament for the first time in next month’s general election.

‘The complaints against the chancellor have all been determined to be baseless,’ a spokeswoman for the federal prosecutor’s office, Frauke Koehler, told the Mannheimer Morgen.

Federal prosecutors in the southwestern city of Karlsruhe are responsible for investigating state security offences and are required by law to review all criminal complaints of this nature.

Merkel’s decision to let in more than one million asylum seekers in 2015 and 2016 sent support for her conservative Christian Democratic Union party into a nosedive but her support has recovered as new arrivals have dwindled.

But earlier this week the Chancellor insisted she would do everything ‘the same way again’ if she had the opportunity.

She said: ‘It was an extraordinary situation and I made my decision based on what I thought was right from a political and humanitarian standpoint.

‘Those kinds of extraordinary situations happen every once in a while in a country’s history. The head of government has to act and I did.’

More than a million people from across Asia, Africa, Europe and the Middle East entered Germany two years ago when Mrs Merkel opened her country’s doors to Syrian refugees. 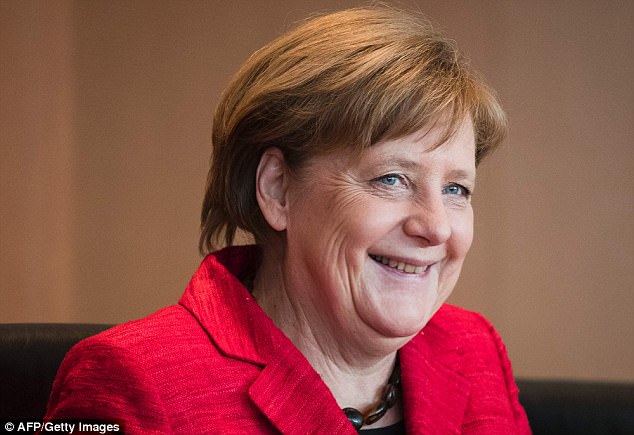 No regrets: Mrs Merkel has said she would change nothing about her response to the migrant crisis of 2015

She now enjoys a double-digit lead in the polls against her Social Democratic rival Martin Schulz in her bid for a fourth term.

However, AfD supporters have been turning out in force to protest at many of her campaign rallies, particularly in the former communist east of the country.

In the AfD stronghold of Bitterfeld-Wolfen late on Tuesday, Merkel was met with a chorus of boos and cries of ‘get out!’.

In a state election last year, the AfD scored around 32 per cent of the vote in the city, once the heart of East Germany’s chemicals industry.

At a later campaign event in the eastern city of Brandenburg an der Havel, the chancellor was also jeered, with some demonstrators holding signs saying ‘Merkel must go!’, echoing a pro-democracy rallying cry in the late 1980s, ‘The (Berlin) Wall must go!’.

The AfD, which groups extremist anti-Muslim and anti-migrant forces with more moderate voices, is currently polling at between eight and nine per cent.