Palaeontologists from University College Cork in Ireland say their finds reveals the first evidence of how dinosaurs shed their skin.

Just like human dandruff, the fossil dandruff is made of tough cells called corneocytes, which in life are dry and full of the protein keratin.

UCC’s Dr Maria McNamara (pictured) and her team studied the fossil cells, and dandruff from modern birds, with powerful electron microscopes for the study, published today in the journal Nature Communications

UCC’s Dr Maria McNamara and her team studied the fossil cells, and dandruff from modern birds, with powerful electron microscopes for the study, published today in the journal Nature Communications.

‘The fossil cells are preserved with incredible detail – right down to the level of nanoscale keratin fibrils,’ Dr McNamara said.

‘What’s remarkable is that the fossil dandruff is almost identical to that in modern birds – even the spiral twisting of individual fibres is still visible.’ 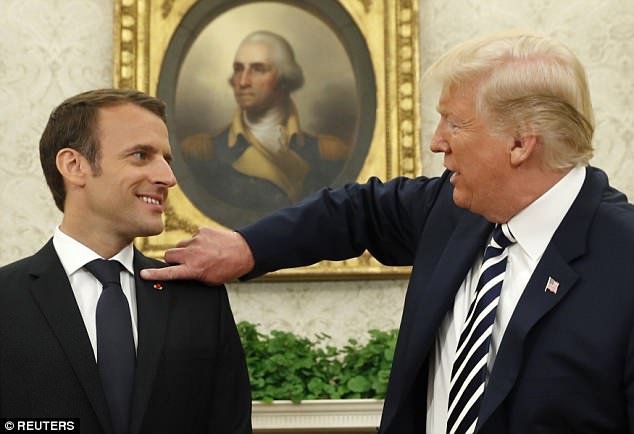 French President Emmanuel Macron (L) looks on as U.S. President Donald Trump flicks a bit of dandruff off his jacket during their meeting in the Oval Office on April 24, 2018.

The dandruff is the first evidence to show how dinosaurs shed their skin.

The feathered dinosaurs studied – Microraptor, Beipiaosaurus and Sinornithosaurus – clearly shed their skin in flakes, like the early bird Confuciusornis studied by the team and also modern birds and mammals, and not as a single piece or several large pieces, as in many modern reptiles, the team concluded.

The study suggests that this modern skin feature evolved sometime in the late Middle Jurassic, around the same time as a host of other skin features evolved.

Scientists have announced the discovery of a crow-sized, bird-like dinosaur with colorful feathers from northeastern China that lived 161 million years ago during the Jurassic Period.

They named it Caihong, the Mandarin word for rainbow. 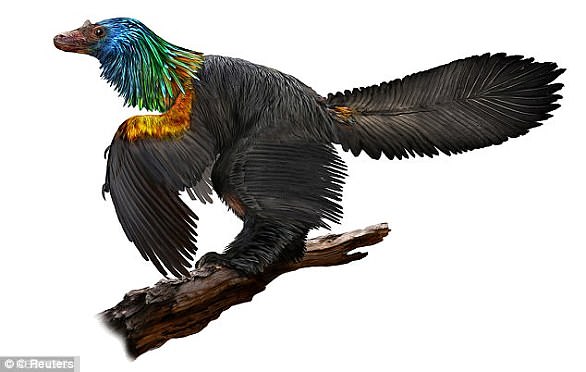 The crow-sized, bird-like dinosaur with colorful feathers from northeastern China that lived 161 million years ago during the Jurassic Period

Microscopic structures in the nearly complete fossil unearthed in Hebei Province indicated that it boasted iridescent feathers, particularly on its head, neck and chest, with colors that shimmered and shifted in the light, like those of hummingbirds.

The feathers would have produced a glittering display that could have provided a sexual cues to potential mates, in the same way as peacock tails.

The discovery ‘suggests a more colorful Jurassic World than we previously imagined.’

‘There was a burst of evolution of feathered dinosaurs and birds at this time, and it’s exciting to see evidence that the skin of early birds and dinosaurs was evolving rapidly in response to bearing feathers,’ Dr McNamara added.

Modern birds have very fatty corneocytes with loosely packed keratin, which allows them to cool down quickly when they are flying for extended periods.

The corneocytes in the fossil dinosaurs and birds, however, were packed with keratin, suggesting that the fossils didn’t get as warm as modern birds, presumably because they couldn’t fly at all or for as long periods.

Co-author Professor Mike Benton, from the University of Bristol’s School of Earth Sciences, said: ‘It’s unusual to be able to study the skin of a dinosaur, and the fact this is dandruff proves the dinosaur was not shedding its whole skin like a modern lizard or snake but losing skin fragments from between its feathers.’