Michelle Ostaudelafont was a healthy teenager playing high school lacrosse in Nashua, New Hampshire, when she suffered a stroke.

The then-17-year-old was struggling to see and couldn’t move her arm during a tournament.

Doctors told her she was suffering from a pediatric stroke, which only occurs in 11 out of 100,000 children in the United States and are rarer than in that of an adult.

Three years later, there is still no explanation as to why a healthy and active teenager suffered from a stroke, and she still hasn’t regained full mobility in her left hand.

But she remains hopeful that she never will never have another stroke and wants other children know that they too can overcome a health condition like hers.

Michelle Ostaudelafont, 20, experienced a stroke when she was only 17 years old. She lost movement in the left side of her body and had to go through months of rehab 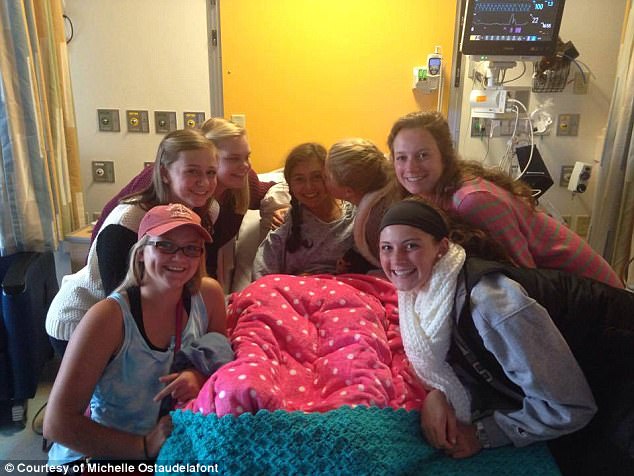 Michelle’s field hockey and lacrosse teammates visited her in the hospital after her stroke. She was there for more than four days and then went through months of rehab

‘I went to reach for my water bottle on the sideline, and I couldn’t see out of my left eye,’ Michelle said to Daily Mail Online.

She first experienced stroke symptoms during a break in lacrosse games.

Michelle tried to walk over to her teammates to tell them something was wrong but fell over because her left leg wasn’t working.

‘The athletic trainer thought I was overheated, which I thought was weird because it was chilly outside,’ Michelle said.

Pediatric strokes and how they are treated

Pediatric strokes occur in 11 out of every 100,000 child in the United States.

They are more likely right after the child is born or in the first couple years of their life.

But while a stroke in someone under the age of 18 is uncommon, it isn’t unlikely.

Strokes happen when the blood flow in one part of the brain is halted.

This causes the cells to lack oxygen for a brief period of time.

Children typically recover from strokes better than adults because their brain is still growing.

But this treatment is controversial in using for children.

Aspirin or baby aspirin is a medication option because it helps thin the blood.

Also, patients will participate in occupational and physical therapy.

An ambulance was called to bring her to a local hospital in Nashua, New Hampshire.

Doctors diagnosed her with a pediatric stroke after a scan of the brain showed damage on the right side.

‘I really didn’t know what a stroke was,’ Michelle said. ‘It was pretty scary.’

She was transferred to the Stroke and Cerebrovascular Center at Boston Children’s Hospital to receive specialized care for her condition.

A stroke occurs when the blood supply in the brain is cut off and deprives the cells of the oxygen they need.

Michelle’s stroke happened due to a clot in her right thalamus, which then impacted the left side of her body.

Pediatric strokes are uncommon but not unlikely in people younger than 18.

‘Babies are at an increased risk for stroke,’ said Dr Laura Lehman, a neurologist at Boston Children’s Hospital.

Michelle stayed in the hospital for five to six days as her body recovered.

But doctors still don’t know the exact cause for why she experienced a stroke so young.

‘I was pretty healthy my entire life,’ Michelle said. ‘I always played sports and was always pretty active.’

She immediately started rehabilitation for the left side of her body to gain back mobility.

‘I went through a lot of therapy, both occupational and physical, for months after it happened,’ Michelle said.

She had to relearn how to swallow, eat, move her left limbs and walk again.

‘My hand hasn’t come back all the way yet,’ Michelle said. ‘That was the hardest thing to come to terms with.’ 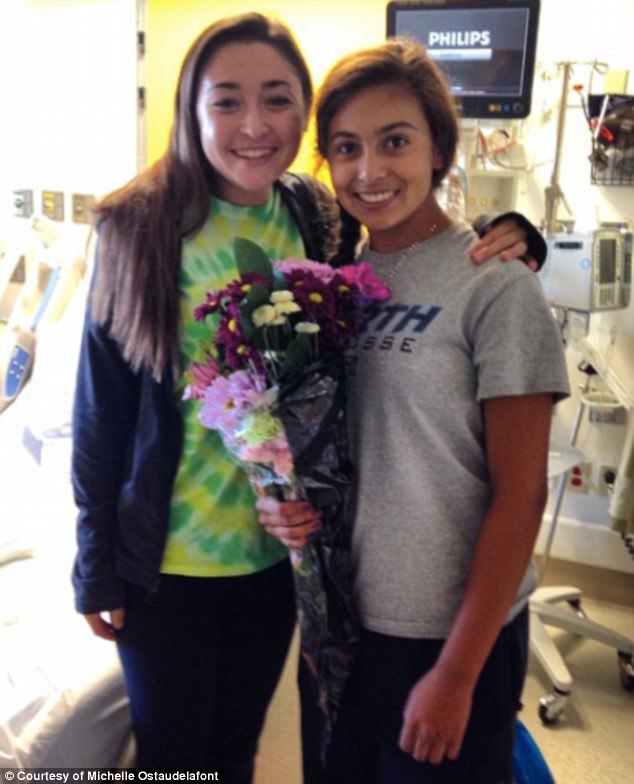 One of Michelle’s oldest friends, Ellie, visited her in the hospital right before she was being released. Doctors are still unsure exactly what caused the stroke

‘For the hand, we do constraint-induced movement therapy,’ Dr Lehman said. ‘We restrain the mobile side to force the weaker side to move.’

One exercise Michelle worked on was spinning a jack with her left hand while her right hand was restrained behind her back.

She started therapy as soon as she was stable to help her brain recover quickly from the stroke.

Dr Lehman explained they do this for all stroke patients to help them recover.

‘We’re hoping that the brain can make those new connections and the area injured can compensate for it,’ Dr Lehman said.

Michelle and her doctors remain positive that she will never experience another stroke again.

But she takes a baby aspirin once a day to keep the blood from forming clots and sees her doctors for annual check-ups.

‘Hopefully it will give some kids inspiration,’ Michelle said. ‘I want them to have hope and know they can recover.’