Nearly three quarters of NHS hospitals deny women their right to choose to give birth by caesarean section, a charity has revealed.

The National Institute for Health and Care Excellence (NICE) says women who want a C-section should be offered one, but many hospitals do not obey the guidelines.

Childbirth charity Birthrights says women face judgemental attitudes and disrespect when they opt for a c-section.

It claims only 26 per cent of hospitals are following NICE’s guidelines and 47 per cent have inconsistent or confusing policies on caesareans.

Campaigners say women should be allowed to have the birth they choose and are concerned vulnerable women are being forced to have dangerous vaginal births.

Expectant mothers face a ‘postcode lottery’ if they want to choose to have a caesarean section, a charity has warned, because a majority of hospitals do not readily offer them

Birthrights published a report today revealing a ‘postcode lottery’ for women who want to have a c-section, which they could be refused at 74 per cent of hospitals.

Availability of the procedure varies across the country, with some hospitals openly offering caesareans at the mother’s request while others refuse them outright.

NICE says if a woman has discussed it with a doctor and feels a c-section is best for them, she should be allowed to have one.

But Birthrights said problems faced while requesting a c-section is the main reason people phone the charity for help.

Caesarean sections may be offered for medical reasons, such as if the baby is in the wrong position or the mother has complications or high blood pressure.

But women can also opt to have one for personal reasons – although Birthrights’ research has revealed many hospitals have reservations about offering them.

‘We are concerned that this lack of respect for patient dignity could have profound negative consequences for the emotional and physical safety for women.’

MOTHER WHO HAD A HAEMORRHAGE AFTER BEING DENIED A CAESAREAN SECTION

Lucie Tidman had a serious haemorrhage after being denied a caesarean section for her second child.

She suffered a haemorrhage during the birth of her first child and was rushed into surgery for treatment, she told the BBC.

When she asked for one, the Royal Cornwall Hospitals Trust said a c-section would not be possible for Ms Tidman’s second child. 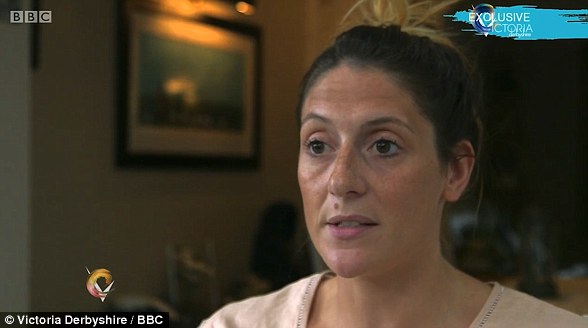 Lucie Tidman, from Cornwall, had a haemorrhage during the birth of her second child  when she was denied a caesarean section after suffering a bleed during her first childbirth

But again she had a haemorrhage during the birth and had to be rushed to theatre, while her baby reportedly ‘came out purple’ and was taken to intensive care.

Ms Tidman said the experience was ‘horrific’ but the hospital claims it follows NICE’s guidelines to offer c-sections when they are wanted.

Birthrights said it feared women who may have been through sexual assault or were vulnerable due to language barriers, mental health problems or learning difficulties were being forced to undergo unsafe vaginal births.

It found 28 per cent of women requesting a caesarean did so because they had an underlying health problem, such as pelvic pain, that did not meet the medical threshold for requiring a caesarean.

And many women who requested a caesarean were told to go elsewhere.

The charity’s report showed just 39 hospital trusts are committed to offering women c-sections if they want them.

A further 70 do not have clear policy on whether they would offer one, 22 have a policy preventing c-sections on request, and 17 are unknown.

Birthrights found that the John Radcliffe Hospital in Oxfordshire had a policy in place to refuse all maternal request caesareans.

Lawyers for the charity have since written to the Oxford University Hospitals NHS Trust and Oxfordshire Clinical Commissioning Group asking for more information on the policy.

One woman who requested a caesarean at the John Radcliffe Hospital in 2017 said she was made to feel ‘like a child being told off for doing something wrong’.

‘Trusts are bound by human rights’

‘Any statement or policy from a trust that caesarean would only be granted on medical grounds may be incompatible with trusts’ obligations to have an open, supportive, two-way discussion that explores all reasonable options.’

She added that any policy applied in a blanket way may be incompatible with human rights law.