Incredible footage has shown a vehicle owner and several bystanders trying to subdue an alleged carjacker as he attempted a reckless getaway.

The car owner was walking towards his Holden Commodore parked outside a store in Toodyay, north-east of Perth at 4.10pm on Monday when the would-be carjacker clambered into the vehicle.

Having left his keys in the ignition, the owner watched the alleged thief begin to speed away in the high-powered V8.

The Holden then smashed into a Ford Ranger before being pinned by an Isuzu truck.

The owner then attempted to smash through the driver’s side window with a tire iron while another man sat on the bonnet of the Isuzu and attempted to kick in the passenger side.

As the thief became frantic he allegedly reversed the stolen car before driving it forwards while the owner continued to hang onto the car and smashed the windscreen with the tire-iron.

The Holden then spun out of control and hit a red Ford Everest, knocking it onto the curb.

The stolen car, now crumpled from the latest crash, remained still as the owner and several men smashed into the car as the thief allegedly escaped out the other side. 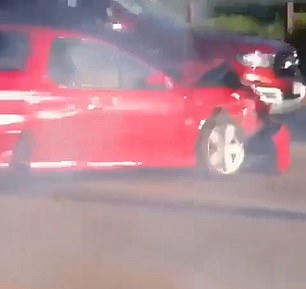 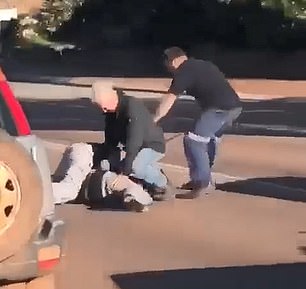 As the thief became frantic they allegedly drove forwards and spun out of control before hitting another a red Ford Everest, knocking it onto the curb

His alleged escape was brief as the thief was tackled by one of the good samaritans who tackled him and made a citizen’s arrest.

Police arrived at the scene, arrested the man and took him to Northam District Hospital to treat some minor injuries.

The alleged thief was charged with several offences and police said they wanted to question a second man that was seen with the accused prior to the theft.

The accused was scheduled to appear at Northam Magistrates Court next month.