A guide to Kiev: All you need to know about the Champions League final venue

Thousands of Liverpool and Real Madrid fans have already begun their journeys to Kiev for the Champions League final – but what can they expect?

Saturday’s showdown will take place at Dynamo Kiev’s NSC Olimpiyskiy Stadium, with both clubs handed just 16,626 tickets despite the 63,000 capacity.

Here, Sportsmail takes a closer look at what supporters will find in and around the ground, plus what else Ukraine’s capital has to offer.

The stadium, which is home to Ukrainian giants Dynamo Kiev, was enlarged to hold over 100,000 back in 1966, while more work was carried out in order for it to host football matches during the 1980 Olympic Games.

In 1996, the ground had its named changed to Olympic Stadium and a refurbishment programme reduced the capacity back down to 83,000.

Another redevelopment programme took place prior to Euro 2012 when the ground was picked to host the final, which Spain won 4-0 against Italy.

The entire first tier was rebuilt, as was the West Stand. A new roof was also installed in a bid to modernise the ground, with Dynamo making it their permanent home shortly afterwards. 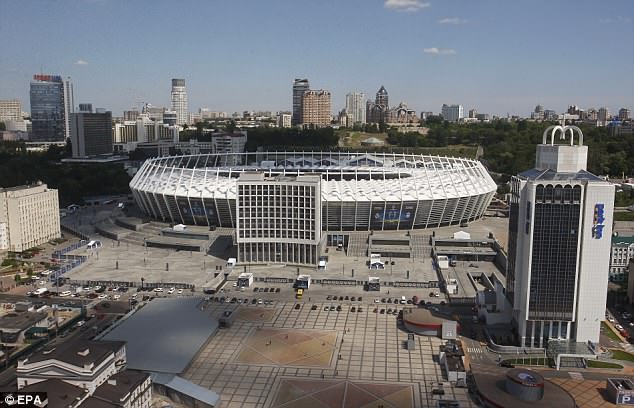 The stadium will have a reduced capacity of 63,000 when Liverpool take on Real Madrid

Both clubs were given 16,626 tickets each for the final, although Real Madrid have returned more than 2,000 of their allocation after fans complained of logistical and financial complications involved in travelling to Kiev.

Another 6,700 tickets were made available to fans worldwide, with the remaining 23,048 going to hospitality members, rights holders, commercial partners, officials, players and media.

Liverpool fans will be sat in section B of the stadium which is at the northern end, closest to the city centre. Real supporters will be housed in section D. 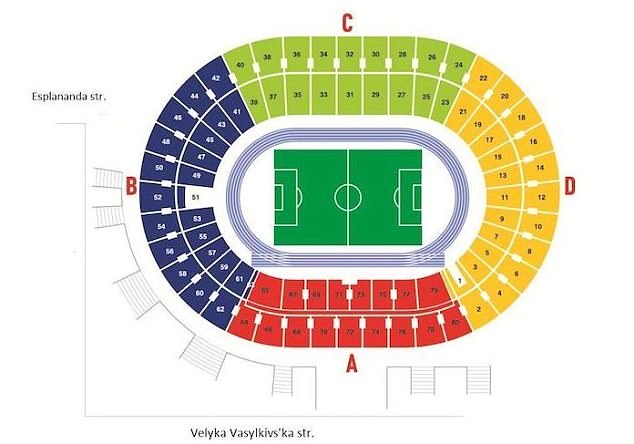 Liverpool supporters will sit in section B of the stadium, with Real Madrid fans in section D

Supporters can stroll from there to the ground in around 15 minutes, with Liverpool fan meeting point, Taras Shevchenko Park, around the same distance away.

Fans can also take the Metro to the ground, with Palats Sportu station – on the green line – the most convenient option for those of a red persuasion.

Fans will be forced to travel light on the day of the game, with only small bags being allowed into the ground ahead of kick-off.

Supporters must ensure they do not bring in anything bigger than 20x25x45cm, with searches being undertaken by stewards at the outer security perimeter. 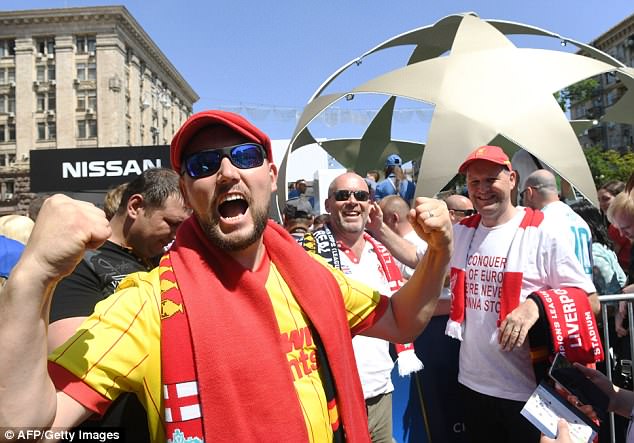 The time in Kiev is two hours ahead of the UK, meaning the game will kick-off at 9.45pm local time on Saturday evening.

Turnstiles at the stadium will open at 6.45pm local time, with fans being urged to arrive early in order to get through security checks.

Liverpool fans have a designated meeting point – Taras Shevchenko Park, which is just off Voldymyrska Street.

There are plenty of bars and restaurants around there, with even more at the nearby Khreshchatyk Street and Independence Square.

Some pubs and clubs are open 24 hours a day, with food served late for anyone still hungry after the game finishes.

The UEFA Champions Festival, which starts on Thursday and runs through to Sunday, is also open to fans of both clubs and locals alike. 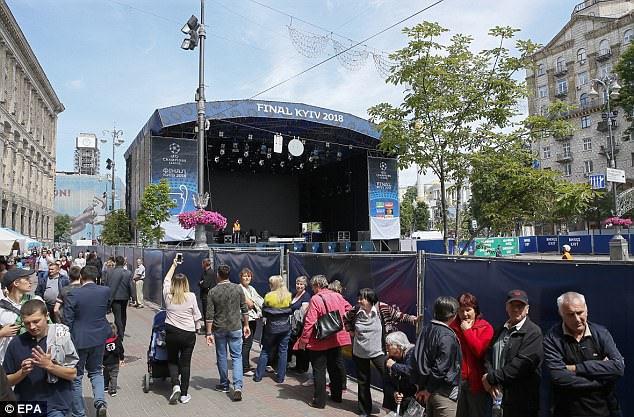 Kiev’s Metro system is a quick and easy way of getting around the city, with just three lines for visiting supporters to negotiate.

One orange token, which costs just 10p (4UAH), is required for each journey. Alternatively, fans can purchase a contactless card for 30p (12UAH) and top it up at the ticket machines.

And if you don’t know Ukrainian, you’re advised to use an app like Google Translate to help make sense of the station names.

The local currency in Kiev is Hryvnia, with one English pound worth around 35 Hryvnia at the current exchange rate.

A large beer should cost less than £2, while a big meal inclusive of drinks is likely to set you back the equivalent of around £10.

If you fancy something a little different to a burger and chips, Kiev offers a number of local delicacies for fans to get their teeth into.

One of the most popular is perepichka, which is basically a sausage in deep-fried dough. And if that doesn’t fancy, perhaps try pyrizhky or pirozhki – a baked or fried bun or pastry stuffed with a variety of fillings.

Borscht – a beetroot soup with sour cream – is also widely served around the city. 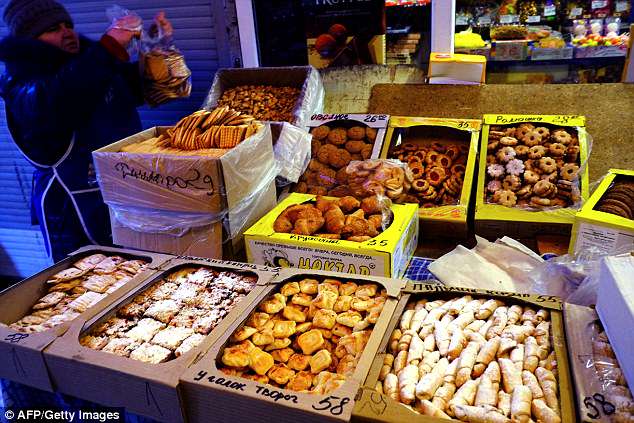 WHAT ELSE IS THERE TO SEE?

For anyone who wants to see more than just the stadium and local watering holes, Kiev has plenty of historic sights on offer too.

The 102m tall Motherland Monument and the 96m tall Great Bell Tower provide stunning views across the capital from the west bank of the Dnipro river.

And if heights aren’t your thing, why not wander down the lengthy Andriyivskyy Descent, which is filled with incredible buildings and artists selling everything from paintings to souvenirs.