And on Wednesday, the 43-year-old actress proved she certainly isn’t shy when it comes to flaunting her own sensational figure.

Spotted near her home in Byron Bay, the beauty paraded around her trim pins in a tiny pair of denim cut-offs while at the town’s Roundhouse cafe.

Boho beauty! Actress Elsa Pataky, 43, (pictured) ensured all eyes were on her as she opted for a pair of tiny denim shorts and no shoes for brunch with pals at a Byron Bay cafe on Wednesday

Elsa certainly looked animated while chatting with a female pal, with the two women appearing to sip on healthy drinks.

The Tidelands star certainly seemed upbeat, with her unable to wipe the smile off her face during the social occasion.

Elsa opted to wear the tiny denim cut-off shorts, which flaunted her toned and tanned pins as she sat on one of the cafe’s stools. 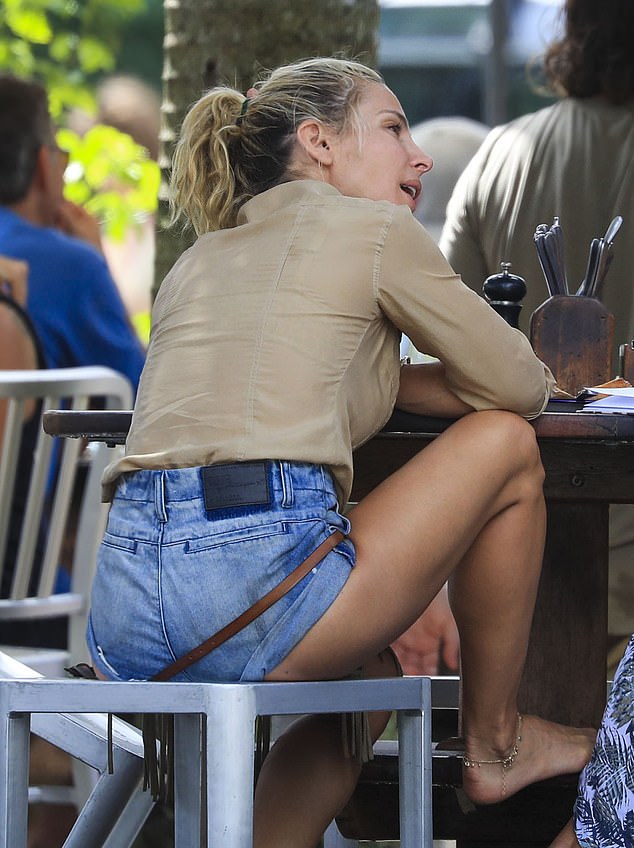 Toned! Elsa showed off her toned and tanned pins in the little shorts 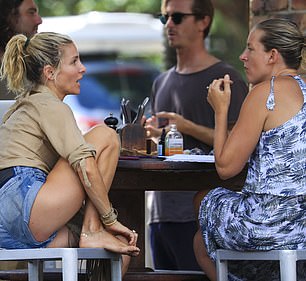 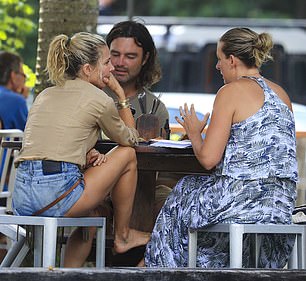 Animated: The Fast and the Furious actress looked animated as she chatted with a female pal at Byron Bay’s Roundhouse cafe 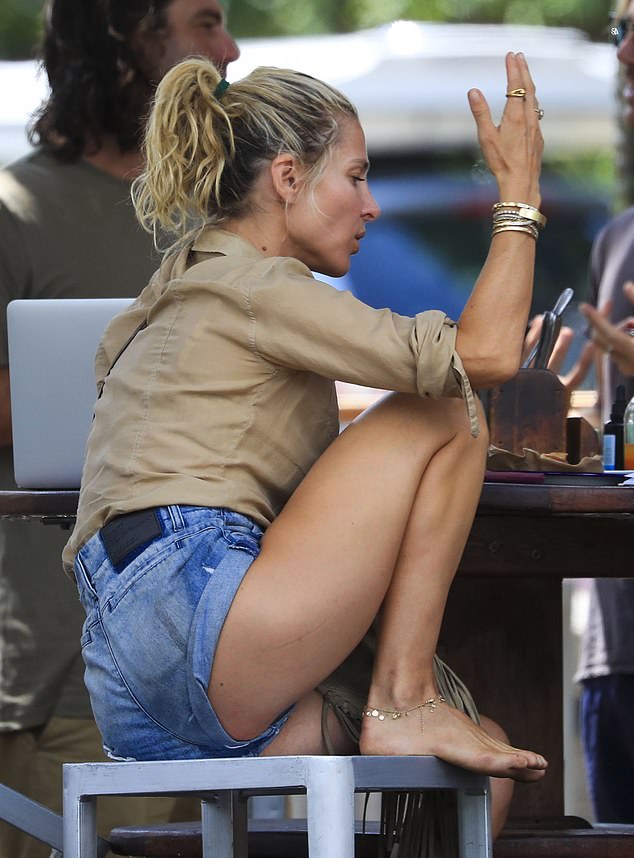 Style: Elsa was only too happy to show off her fit physique in the boho-inspired outfit

She paired the denim shorts with a loose-fitting khaki shirt, which she opted to wear partially undone flaunting a hint of her chest.

Elsa kept her look charmingly bohemian, accessorising with a fringed leather pouch bag and a number of bracelets and anklets.

The Hollywood film star opted to go barefoot, as is typical of her style while at home in the semi-tropical tourist hub of Byron Bay. 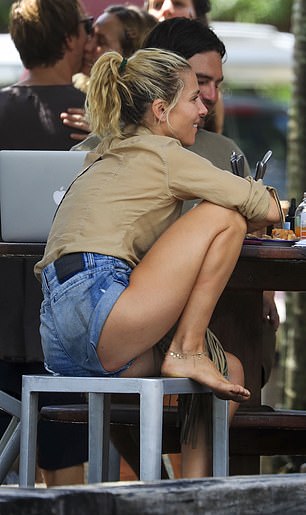 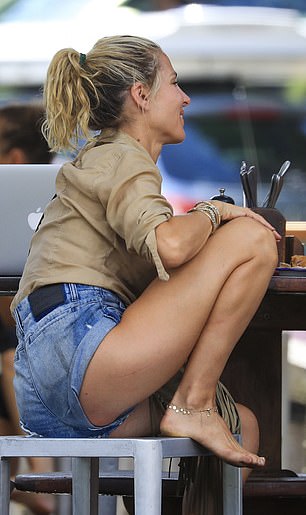 Charming: Elsa flashed her mega-watt smile during the outing 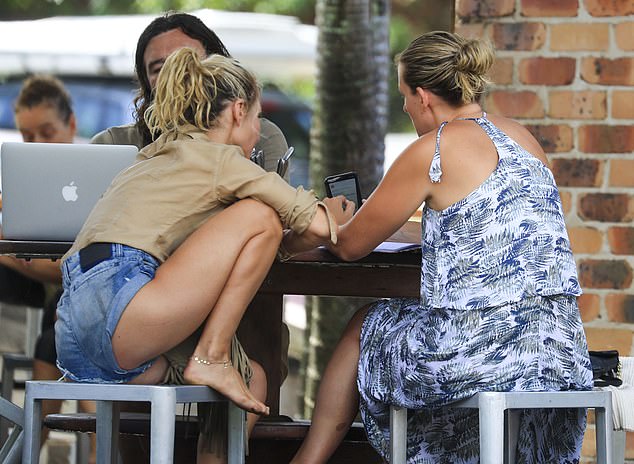 Hey, look at this! At one stage, Elsa’s female pal showed her an image on an iPhone 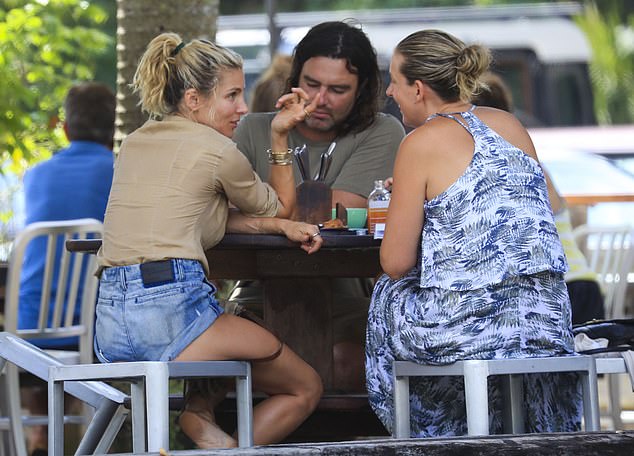 Trio: The two women were joined by a male acquaintance at one point during the brunch

The film star wore her blonde tresses up in a messy ponytail, while wearing only minimal makeup for the outing.

Elsa recently released the lifestyle book Strong, in which she wrote about her diet and exercise tips. 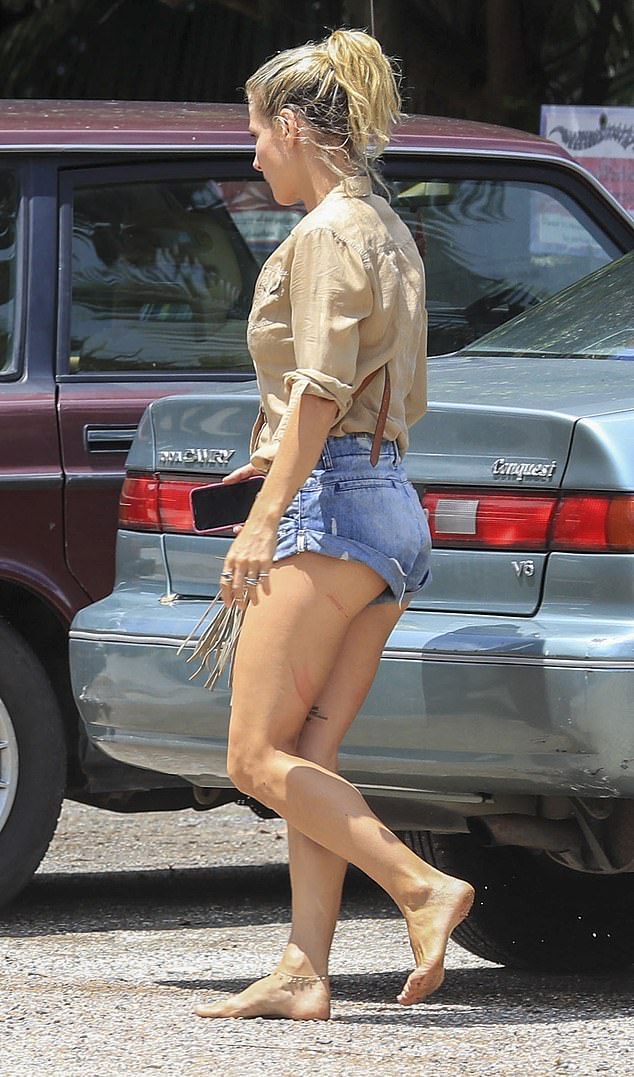 Flashy: Elsa was every inch the boho babe in the skimpy outfit

Workout secrets: Elsa recently published the lifestyle book Strong, in which she wrote that she disliked ‘quick fix’ diets and favoured the Mediterranean diet 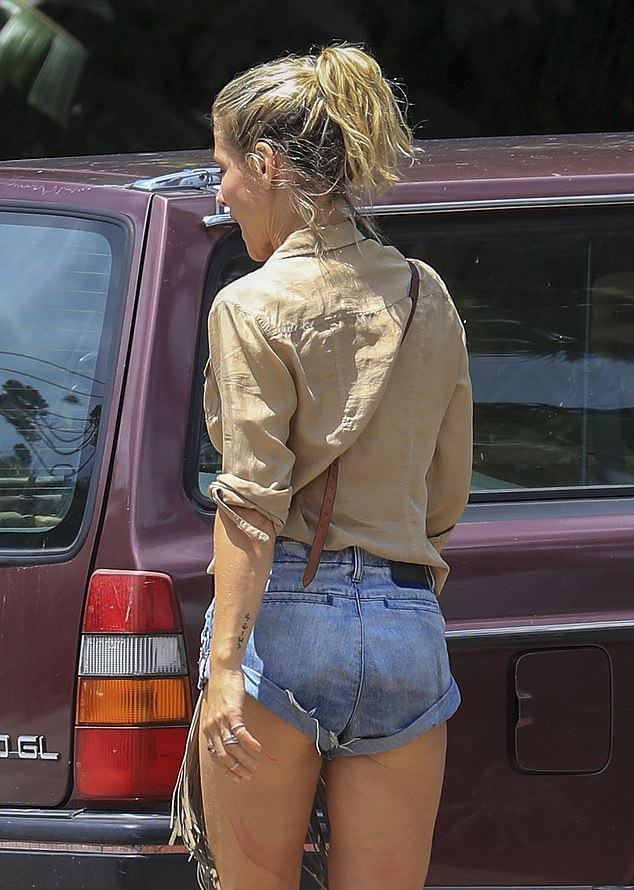 Fit: ‘I don’t believe anything about diets, like quick diets that you do before summer. Those miracles don’t exist,’ mother-of-three Elsa said

‘I don’t believe anything about diets, like quick diets that you do before summer. Those miracles don’t exist,’ mother-of-three Elsa said.

‘Eat healthier, like Mediterranean food every day, not just [for] periods of time,’ she added.

The Mediterranean diet, which is inspired by the eating habits of Italians and Greeks in the 1960s, is generally high in vegetables, fruits, legumes, whole grains, nuts, seeds and olive oil. 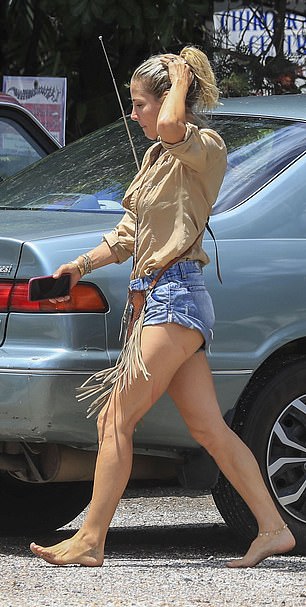 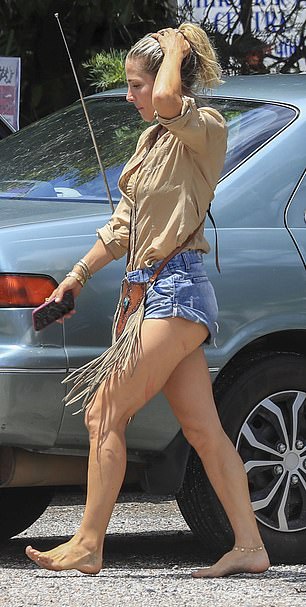 Boho beauty: ‘At a minimum, start [with] 15 minutes, or 20 minutes [of exercise] a day. If you go on a bus to work, maybe get off earlier than your stop and walk,’ Elsa said in the past 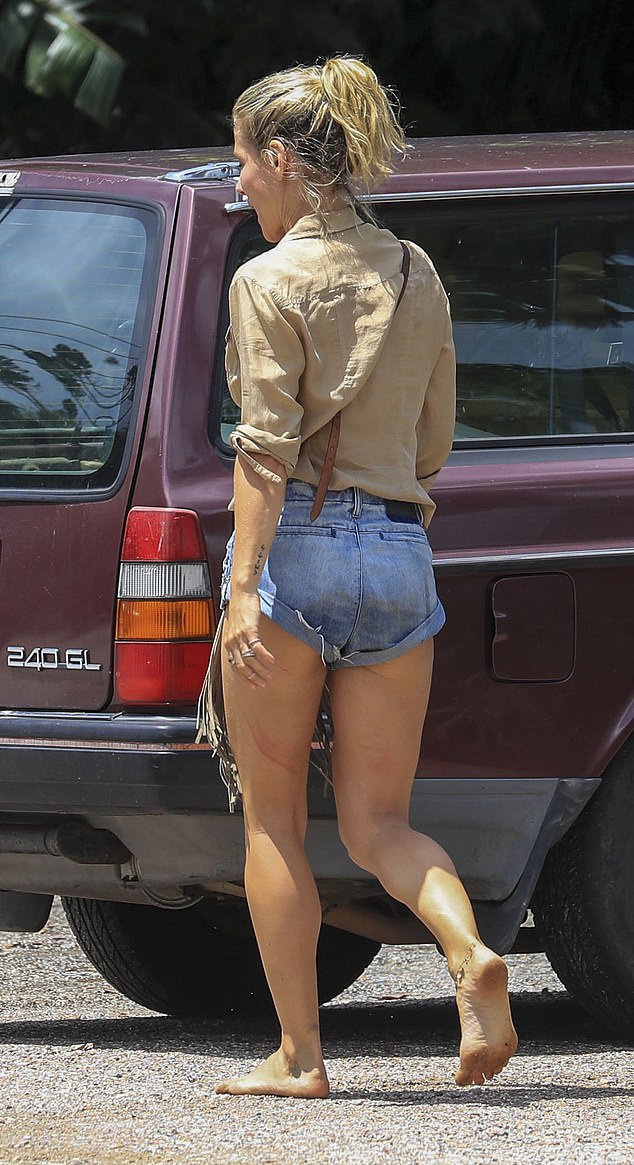 Eat clean: Elsa also advised that sugar, alcohol and fatty foods should be kept to a minimum

Elsa also advised that sugar, alcohol and fatty foods should be kept to a minimum.

On the topic of exercise, the Fast and the Furious star recommended a step-by-step approach.

‘At a minimum, start [with] 15 minutes, or 20 minutes [of exercise] a day. If you go on a bus to work, maybe get off earlier than your stop and walk,’ she said. 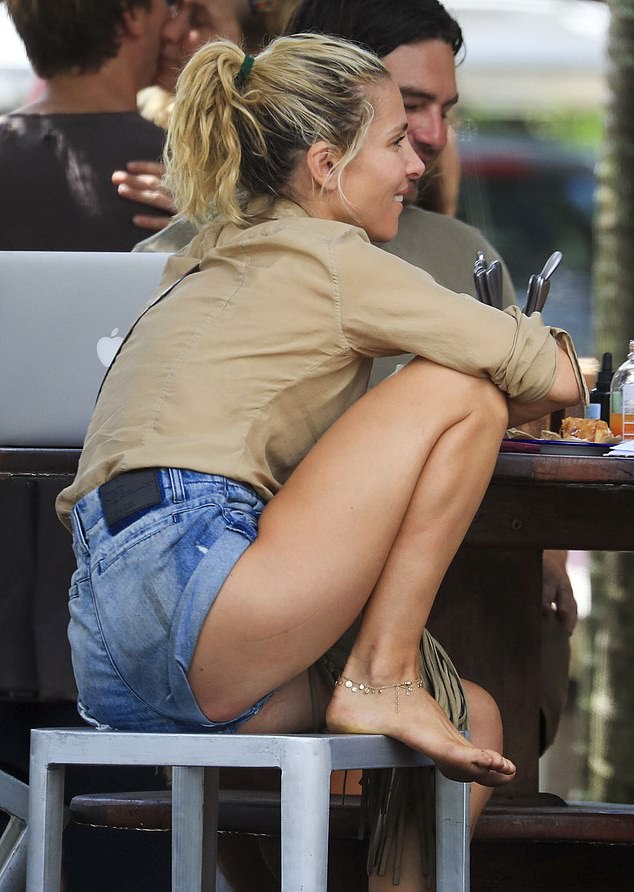 Elsa and Chris, 36, moved into their Byron Bay ‘mega mansion’ several weeks ago.

The 4.2 hectare estate, which the couple purchased in 2014 for $7million, has been completely transformed and is now believed to be worth significantly more.

In addition to a huge rooftop infinity pool, the property also boasts five bedrooms, 10 bathrooms and a butler’s pantry. 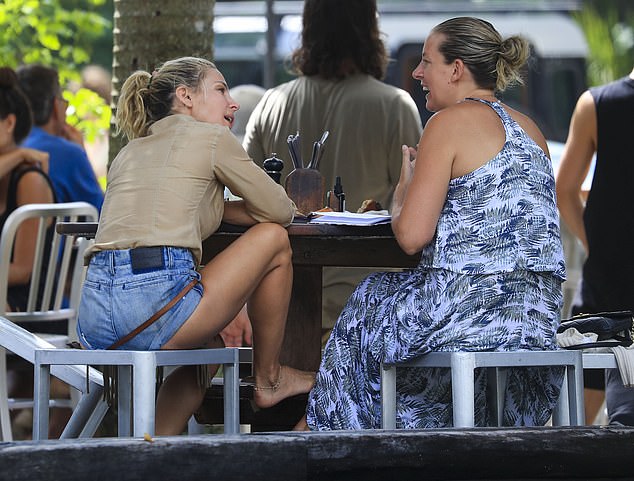 Home: Elsa and Chris purchased the land for their Byron Bay home back in 2014, for $7 million 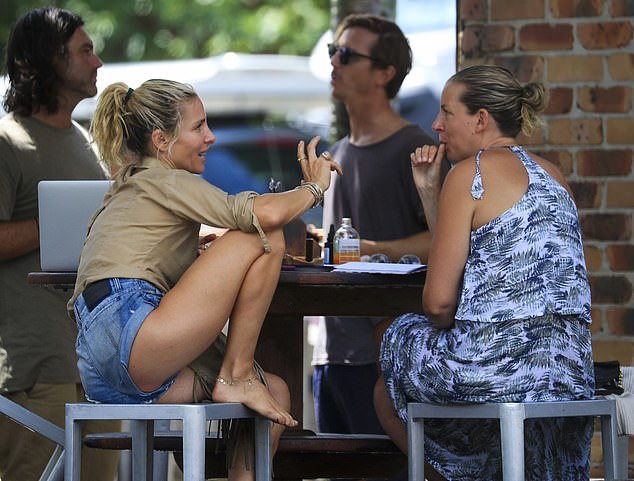 Luxury: Elsa’s Byron Bay home also functions as a luxury retreat too, complete with a steam room, sauna and massage centre, as well as a state-of-the-art gym

The home functions as a luxury retreat too, complete with a steam room, sauna and massage centre, as well as a state-of-the-art gym.

There is also a study and a 7metre x 4metre walk-in wardrobe for Elsa.

Elsa married Chris – who is known for playing Thor in the Marvel Universe films – in late 2010 after less than a year of dating. 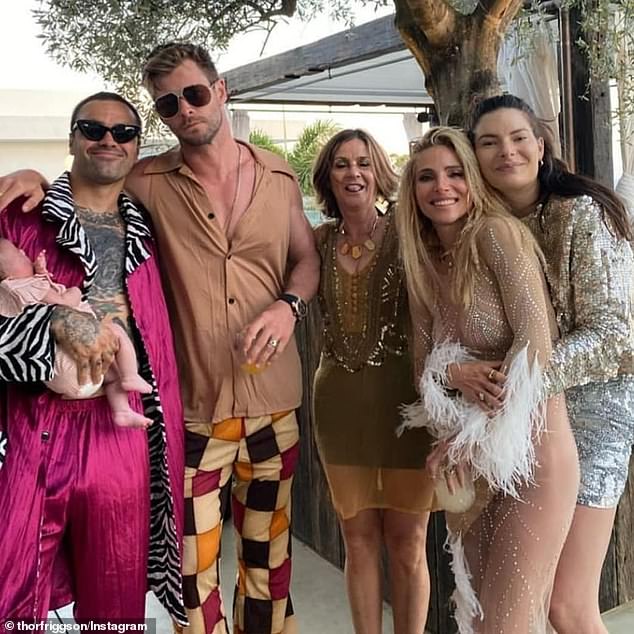 House warming: Elsa recently wore a semi-sheer dress for her housewarming earlier this month, with her husband Chris Hemsworth also showing off his muscular frame