The White House confirmed Monday that Admiral Ronny Jackson remains on ‘active duty’ – but revealed a title that indicates he is no longer the president’s personal physician.

Instead, Jackson is now a ‘deputy assistant’ to President Trump – a post for which the White House declined to provide a job description when asked about it.

‘Despite published reports, there are no personnel announcements at this time,’ he added.

His statement came after Politico reported that he wouldn’t go back to being the president’s personal physician.

White House doctor Ronny Jackson was recently forced to withdraw his nomination for secretary of veterans affairs following a string of allegations. He is now a deputy assistant to the president

Jackson famously gave Trump a sterling public report on his medical condition while hailing the president’s genes at a time when his health and even his mental fitness were under attack.

The White House didn’t respond when asked for a description of what Jackson would do in his new role or how long he would remain there.

Trump on Saturday said Tester should resign and also hinted he knew damaging information about the senator who helped bring down the nomination when he revealed Jackson got the nickname ‘Candy Man’ for allegedly handing out Ambien and other meds on overseas flights. 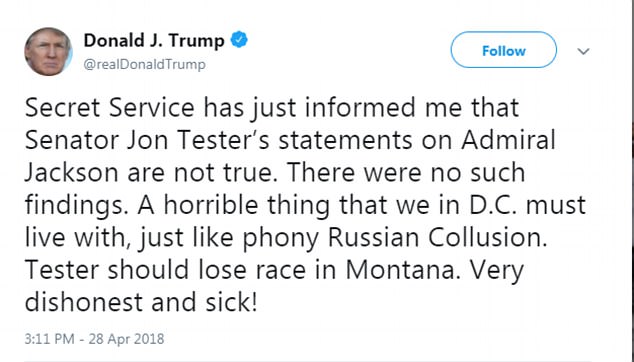 Jackson vigorously denied the allegations against him. Among other things, he said he never wrecked a car, and the Secret Service released a statement saying it had no record he had trashed a government vehicle after a party for an agent – an allegation contained in a document released by the Senate Veterans Affairs committee.

At a rally in Michigan on Saturday night, Trump branded the Democratic senator ‘disgraceful’ for derailing Jackson’s Veterans Affairs nomination and said he ‘knows things’ about him that that could scupper his bid for re-election.

‘What Jon Tester said about this man is a disgrace. I have things I could say about Tester… and if I said them he wouldn’t be elected again,’ Trump told the rowdy rally at the Total Sports Park in Washington Township.

In a tweet Saturday afternoon Trump said Tester’s claims that Jackson was known as the ‘candy man’ among staff for passing out controlled substances on presidential trips was ‘very dishonest and sick’.

‘Secret Service has just informed me that Senator Jon Tester’s statements on Admiral Jackson are not true. There were no such findings,’ Trump tweeted. ‘A horrible thing that we in D.C. must live with, just like phony Russian Collusion. Tester should lose race in Montana.’

A White House insider has claimed President Trump pushed his personal physician Ronny Jackson forward for a government role before he had had been properly vetted.

A Republican strategist who works closely with him claimed the President tends to adopt a ‘ready, shoot, aim, as opposed to ready, aim, shoot,’ approach to hiring.

President Trump is also said to be in the midst of a hiring crisis, as his strict demands on loyalty have caused headaches for other government figures looking to take on staff.

‘The Trump White House vetting machine is an oxymoron,’ the anonymous figure told the Washington Post.

‘There’s only one answer – Trump decides who he wants and tells people. That’s the vetting process.’

Jackson, a Navy rear admiral, was forced to withdraw his nomination for secretary of veterans affairs following a string of allegations that included he loosely handled prescription pain medications and was intoxicated during an overseas trip.

He has also stepped down as Trump’s personal physician following the allegations – which he vehemently denies.

‘They need to probably vet before they start throwing names out,’ said Senator Joni Ernst.

While Walter Shaub, a former director of the U.S. Office of Government Ethics who resigned last summer in protest of Trump’s conduct, said the President’s ‘ethics are based on loyalty.’

He also warned of complacency when it came to the vetting process – arguing that a failure to follow procedure left Jackson vulnerable to attacks in the press.

‘When you make the announcement before you do all of the work, you could end up embarrassing the nominee,’ he added.

Lawyers involved in the vetting process say Trump, or the White House, often announces picks before they are fully vetted – and they describe an irregular process that sometimes is not followed if a candidate has high-level approval.

A number of Cabinet officials have been announced with little more than a public-records search, according to current and former administration officials. 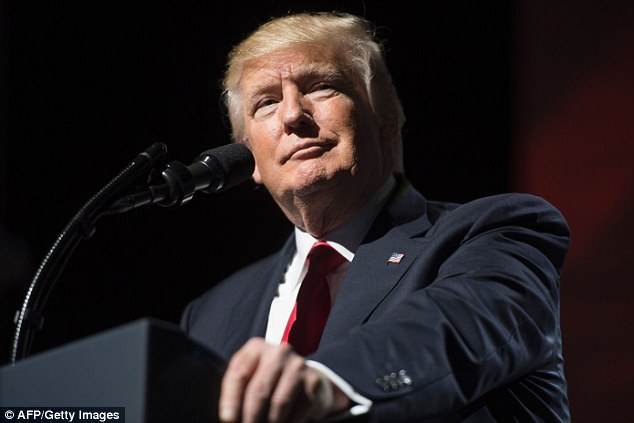 The President was said to have adopted a ‘ready, shoot, aim, as opposed to ready, aim, shoot,’ approach to hiring

‘He would announce, and then we’d say, “You need to fill out some forms”,’ one former official recalled.

White House staff said they employed a process of simply using Google searches to vet candidates in the early days of the Trump presidency – as well as soliciting recommendations from other political appointees.

And although they say the process has come on leaps and bounds – they also cautioned that there is still some way to go before it is fully watertight.

In some cases, the President is also said to have vetoed other government figure’s staff picks over personal mistrust.

When Attorney General Jeff Sessions, then the star of President Trump’s early Cabinet, was assembling his and picked Sarah Isgur Flores as his top spokeswoman – the President reportedly didn’t allow her to take up the post until she pledged her allegiance to him in person.

Aides say this was because she had criticized Trump, repeatedly, during the 2016 Republican primaries.

Vice President Pence is also said to be subject to presidential interference.

At least two of his top candidates for his national security adviser faltered after being deemed unfavorable toward Trump.

One pick, Jerry Hendrix, a retired Navy captain, was seriously considered but was dinged in part because of an anti-Trump tweet, according to a source.