Adoptive parents of Ukranian girl with dwarfism appear in court

The adoptive parents of ‘abandoned’ Natalia Barnett appeared in court for the first time today to deny felony neglect charges for allegedly dumping her and moving to Canada.

And in a fresh twist, prosecutors hinted that 3ft tall Natalia’s true age was not crucial to their case because the couple could still be convicted of dumping a mentally or physically disabled adult under Indiana law.

They say Kristine and Michael Barnett rented an apartment for their adoptive daughter, who has a rare form of dwarfism, then broke off all contact when they moved abroad in 2013.

According to charging documents, Ukrainian-born Natalia was a minor child and ‘dependent’ of the pair when they left her to fend for herself in Lafayette, Indiana. 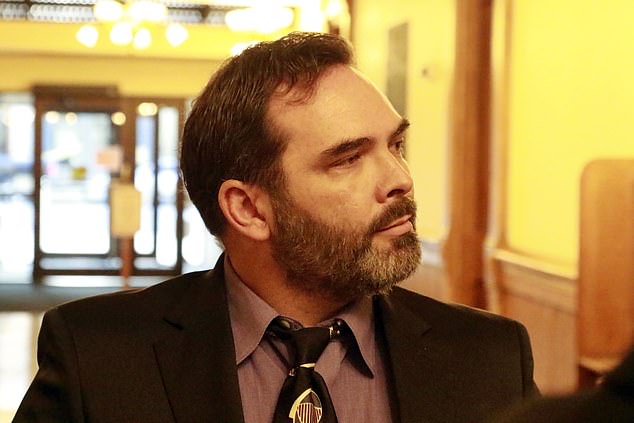 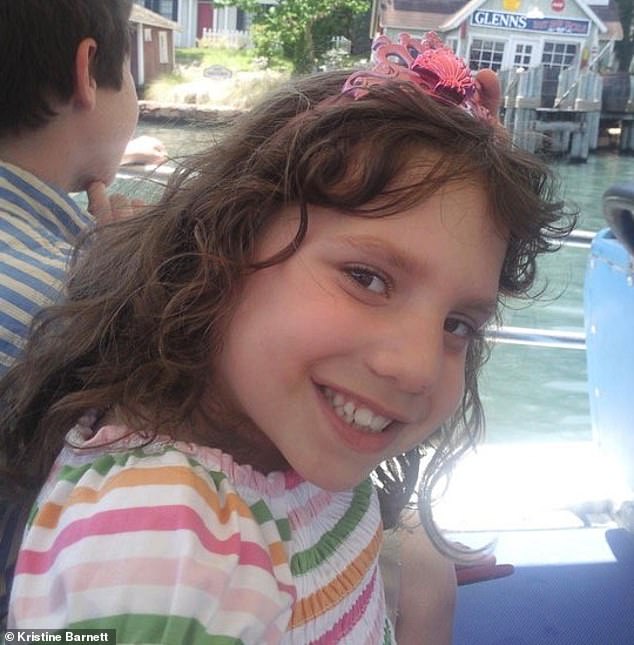 Parenting author Kristine, 45, has sensationally claimed, however, that Natalia was actually a grown up pretending to be a child because of a severe psychiatric illness.

She insists her family are the true victims, having been scammed into adopting a sociopathic adult in 2010 whom they believed was a six-year-old girl.

The Barnetts, who have since divorced, admit leaving her behind and moving to Canada so their oldest son Jacob, a physics prodigy with autism, could attend university there.

But the estranged couple say that, by then, Natalia was legally considered an adult after they obtained an emergency court order in 2012 that revised her age from eight to 22 on the advice of medical experts.

Kristine Barnett looked ashen-faced and anxious this morning as she and co-defendant Michael Barnett, 43, appeared together at Tippecanoe Magistrates Court.

The mother-of-three, wearing a floral blouse, white pants and a black jacket, refused to answer questions from reporters as she arrived, repeatedly saying ‘no comment’.

She shook her head and looked close to tears as magistrate Daniel J. Moore read out the two counts of felony neglect which he said could carry a combined maximum prison sentence of five and a half years. 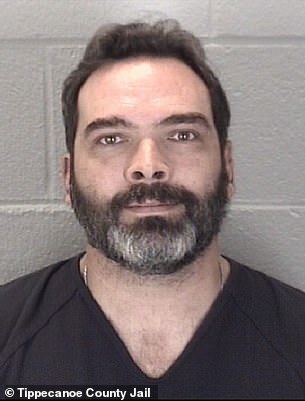 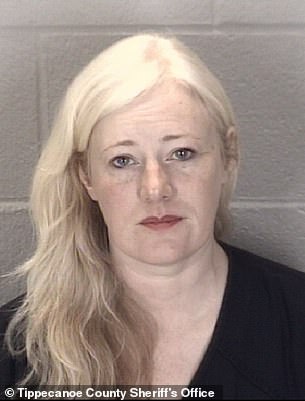 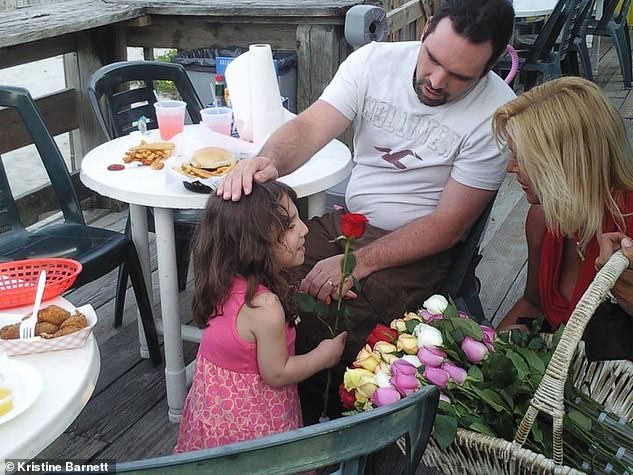 The couple said they showered Natalia with attention, taking her to Disney World, enjoying ice creams, treats and playful pillow fights with her three brothers to slowly bring her out of her shell 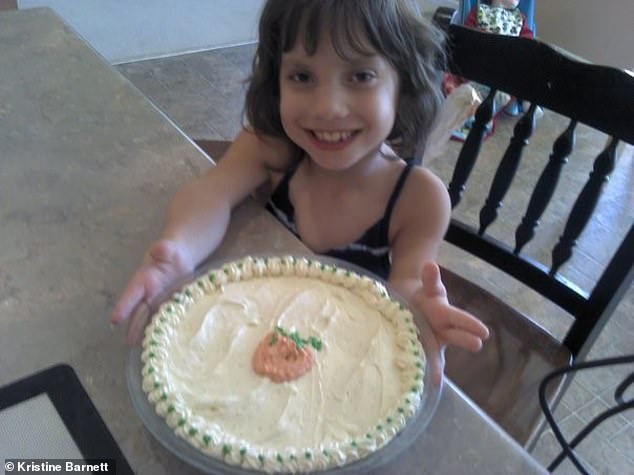 Baby-faced Natalia – either a bubbly 16-year-old girl or a 30-year-old woman, depending on whom you believe – did not attend today’s hearing

Asked if she understood, Kristine Barnett composed herself and replied in an unwavering voice: ‘Yes your honor’.

In what could be a critical factor in the case, prosecutor Jackie Starbuck told the court that the Indiana criminal neglect code can apply to people of any age who are mentally or physically disabled.

‘I just want to put that on the record,’ she said. ‘There are two different definitions of a dependent, either a disabled person or a child.’

Starbuck also questioned Kristine Barnett as to why she did not arrive in court with an attorney.

‘They have another court date. I just retained him yesterday,’ the platinum-blonde defendant replied.

Moore then stressed the importance of her having a lawyer, explaining: ‘If you choose to represent yourself you will be held to the same standards as an attorney.’

A relaxed Michael Barnett smiled at the press despite declining to speak as he entered court holding hands with his new partner.

His attorney Terrence Kinnard pushed back against the prosecution, saying he would be submitting a motion asking them to specify whether they consider Natalia to be a child or simply a disabled adult. 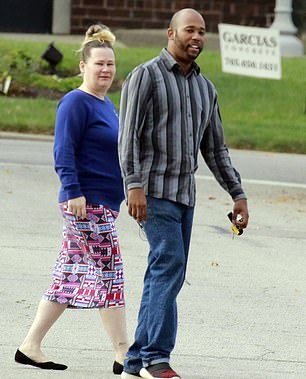 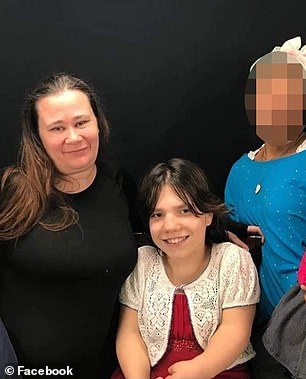 DailyMail.com can reveal the devout couple are aware of the questions swirling around the true age of their Ukrainian ‘daughter’ – but declined to comment when approached 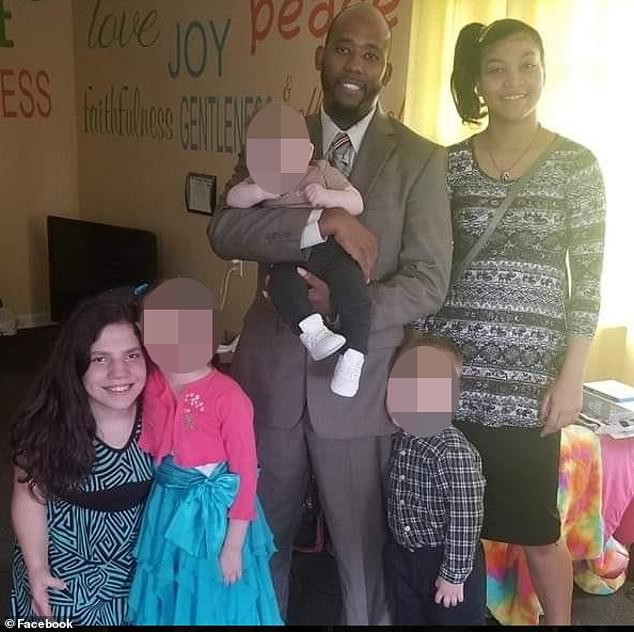 Social media photos show she was taken in by Christian couple Antwon Mans (pictured) 36, and wife Cynthia, and their five kids in suburban Indianapolis

‘As of right now, it is just a broad statement and we will be asking exactly what these charges are,’ he told the court.

Elaborating on his point afterwards, Kinnard told reporters the couple denied neglecting Natalia and were ‘at a loss’ over suggestions they were legally liable for her when they left for Canada.

‘From the discovery and the investigation we have conducted it is clear in our mind that they are in fact the victims of a fraud or ruse perpetrated upon them back when they first requested to adopt this individual that was alleged to be a child when in fact she was not,’ he said.

‘The courts have stated that she is in fact an adult based on the evidence that they heard at hearings back in 2012 and 2017, however we have no indication that this individual has ever been honest about what her true age is.

‘We do have anecdotal reports that she has also indicated to other individuals that she was an adult.

‘We are the position of filing a motion asking for a more definitive declaration of what the actual dependency of this person is and what they are alleging existed at the time my client allegedly neglected her.’

Kinnard said he would also look to depose Natalia herself, whom he said had not seen her adoptive parents for ‘a number of years.’

He added: ‘They still hold her dear in their hearts, they still believe she is a person that deserves love and support. 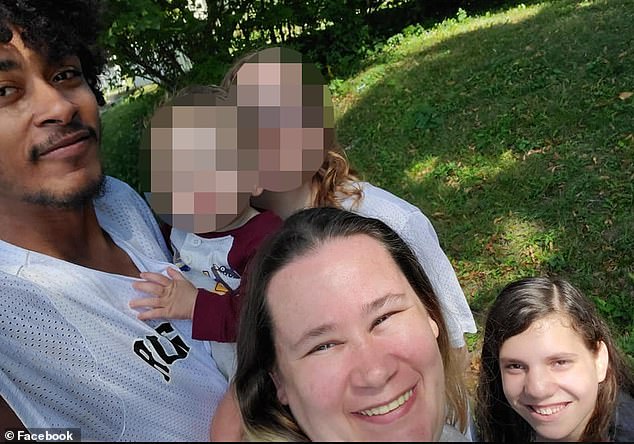 New family: Natalia Grace Barnett (right) now lives with her new family who took her in after she claimed her parents abandoned her in 2013 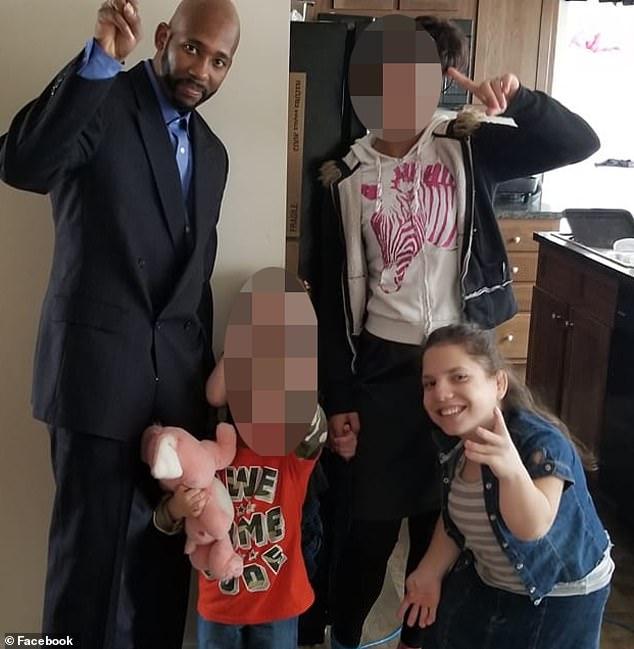 ‘They have never deprived her of that but nonetheless they find themselves in this position.’

Kristine and Michael Barnett are forbidden from leaving Indiana, consuming drugs or alcohol or contacting Natalia ahead of their jury trial on January 28 next year.

Prosecutors had cited the results of two bone density tests carried out on Natalia at the Peyton Manning Children’s Hospital in 2010 and 2012.

The first estimated she was approximately eight years old while the second suggested she was 11.

However Kinnard applied last week to have Natalia’s mental health records released so they can form part of his defense.

The petition remains sealed and will be decided at closed hearing on October 15.

Baby-faced Natalia – either a bubbly 16-year-old girl or a 30-year-old woman, depending on whom you believe – did not attend today’s hearing.

DailyMail.com revealed this week that she is now living with a Christian couple from Indiana and their five kids.

Her new ‘dad’, 36-year-old Antwon Mans, was recently ordained as a pastor and lives in a former church parsonage with his wife Cynthia, 39, a former McDonald’s manager.

The devout couple are aware of the questions swirling around the true age of their Ukrainian ‘daughter’, who is barely taller than a toddler because of the bone disorder spondyloepimetaphyseal dysplasia.

But images posted to social media make clear they treat the diminutive female as a child, dressing her in colorful kids clothes and captioning a photo of Natalia and a young playmate: ‘sweetest best friends ever.’

‘The Manses care for Natalia and she likes being there,’ a family friend told DailyMail.com. ‘There’s nothing crazy going on or anything. These are good people.

‘They just so happened to come across this person that was not being treated right and cared enough to put in the effort to make sure something was done about it.

‘If it’s true that her parents had abandoned her, it’s horrible.’

The Manses tried to become Natalia’s legal guardians in 2016, describing themselves as her ‘caretakers’, but later withdrew their petition.

Nevertheless Natalia has remained a fixture in their lives ever since, appearing at family outings, joining them in church and featuring in regular Facebook updates.

Kristine and Michael Barnett were experienced foster parents themselves when they decided to adopt Natalia in April 2010, believing she had been in the US two years and was six years old. 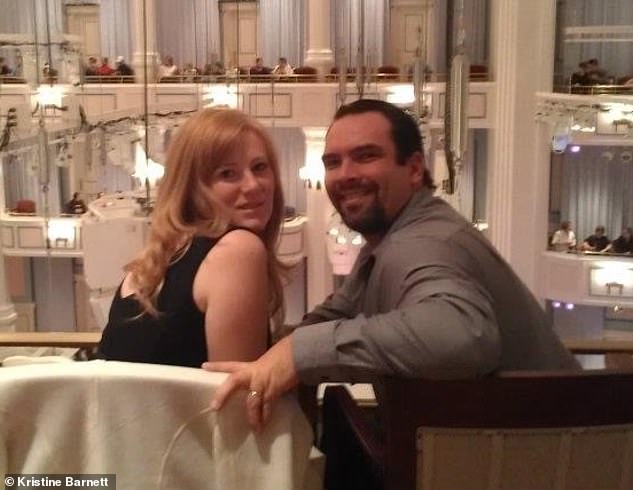 Michael Barnett and Kristine, pictured in October 2011. Michael divorced Kristine in 2014 and remarried 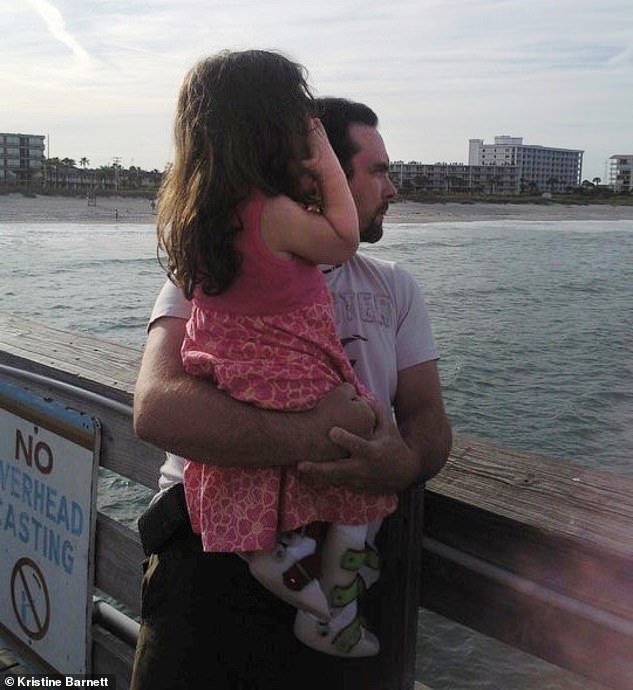 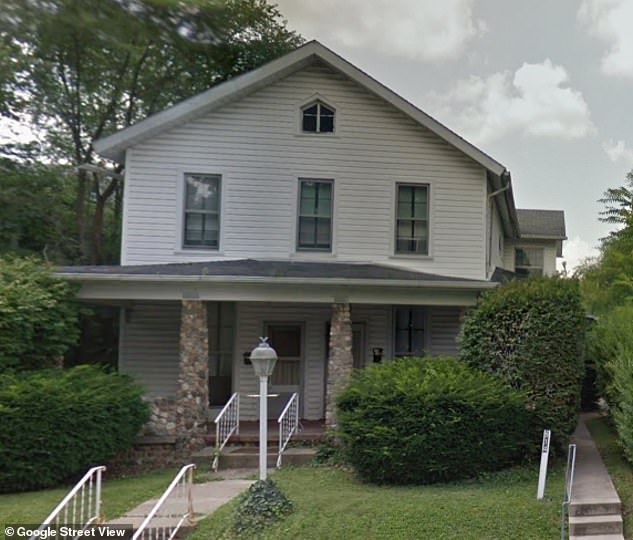 The building in Lafayette, Indiana which Natalia’s apartment was based in. The Barnetts paid a year’s rent for Natalia to live there

They claim they soon harbored doubts about her true age, however, when they noticed she had public hair, was having periods and possessed a vocabulary way beyond her years.

When Natalia began to suffer mental health problems they sought the advice of experts who agreed she was likely far older than her birth certificate suggested.

Medical reports from 2012 state that Natalia had admitted to being ‘at least 18’ and was ‘perpetuating the age misconceptions in order to be treated as a child by parents and strangers’.

That same year Kristine and Michael Barnett lodged an emergency petition with Marian Superior Court to have Natalia’s date of birth revised.

With the stroke of a judge’s pen her birthday was legally changed from September 4, 2003 to September 4, 1989, altering Natalia’s age from eight to 22.

Kristine Barnett says that meant her adopted daughter could finally get the appropriate treatment she needed as an adult.

By then, she told DailyMail.com, Natalia had attacked other kids, poured bleach in her coffee and threatened to stab family members and hide their bodies in the backyard.

‘She was standing over people in the middle of the night. You couldn’t go to sleep. We had to hide all the sharp objects,’ Barnett said in our exclusive interview.

‘I saw her putting chemicals, bleach, Windex something like that, in my coffee and I asked her, what are you doing? She said, I am trying to poison you.’

‘The media is painting me to be a child abuser but there is no child here.’

Prosecutors see things very differently, however, accusing the couple of felony neglect by endangering the life or health of a dependent and denying her necessary support and an education.

An affidavit of probable cause obtained by DailyMail.com refers to a 2014 interview with Natalia who told a detective that her parents left her alone at the Lafayette apartment and she never saw them again.

It also claims that Michael Barnett admitted to a detective that he knew she was a minor child when he and his wife moved to Canada.

His attorney pushed back against that accusation, telling DailyMail.com he made no such admission.

Bishop Mans and his wife appear to have come into Natalia’s life sometime between 2013 and early 2016 when they lodged their application to become her legal guardians.

‘Natalia Grace Barnett is unable to maintain and care for her financial affairs and person as she is actually a minor abandoned by her adoptive parents,’ their March 2016 filing reads.

When Michael Barnett lodged an objection, the Manses sought to invalidate the 2012 court decision that ‘re-aged’ Natalia and asked a new judge to restore her original birth date.

Details of the ensuing April 2016 hearing remain confidential but Kinnard, the only attorney involved who was prepared to discuss the proceedings, said the application was turned down.

Approached this week outside their rented four-bed home an hour from Indianapolis, bishop Mans and his wife refused to discuss Natalia’s case with DailyMail.com.