This is the adorable moment a tiny kitten can’t stop staring when she discovers she can extend and retract her own claws.

Footage captures the tabby cat as she lies on her back on a grey cushion, staring in awe at her paws.

The kitten, Phoebe, then begins extending and retracting her claws – staring at each paw in turn as he realises what she can do.

She continues for a few moments longer, shaking her head slightly as she concentrates on the action.

Phoebe opens and closes each paw in turn, squeezing them shut before stretching them with her tiny claws on show. 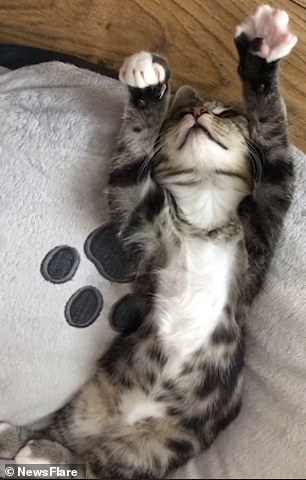 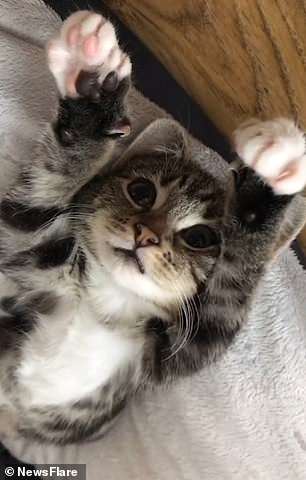 The tabby cat, from Newcastle, opened and closed each paw in turn, squeezing them shut before stretching them

The creature isn’t even distracted from her new-found ability when the camera zooms to her face.

Phoebe just continues showing off her little paws – apparently hypnotised by the action.

The clip, filmed in Newcastle, ends as she slows her movements and stares directly into the camera with glassy eyes.