A dog named after the fiery character from ‘Pete’s Dragon’ is inseparable from a cuddly toy from the Disney film on the much-loved tale.

Elliot Mae, a three-year-old Merle Great Dane from Denver, Colorado, was named after the character from the children’s story, and adorable photos chart her friendship with a toy dragon of the same name from the film.

The story follows the friendship of a boy named Peter and a dragon named Elliot, and adorable images show the canine Eliot growing up with her plush pal from being a puppy in 2017, all the way to 2020.

An amazing photo series capture Merle Great Dane from Colorado Elliot Mae as she grows up with her favourite soft toy, also named Elliot. Both were named after the character of Pete’s Dragon 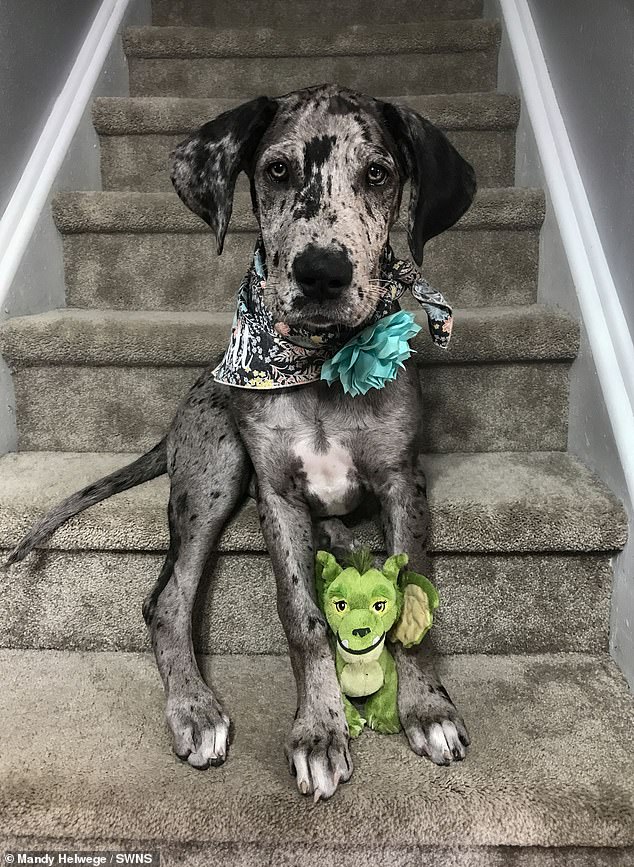 All grown up! Even though she’s now four times its size, Elliot Mae is still best friend with the dragon soft toy

Elliot’s owner Mandy Helwege, 33, said: ‘I got Elliot from a breeder in May of 2017 when she was eight-weeks-old.

‘I’d dreamed of owning a Great Dane growing up and waited over 15 years to finally be able to own one.

‘My Elliot was named after Elliot the Dragon, I had her name picked out shortly after she was born.

‘I ordered the dragon toy off of Amazon so her breeder could use it in a photoshoot with her that I paid her to do when she was four-weeks-old. 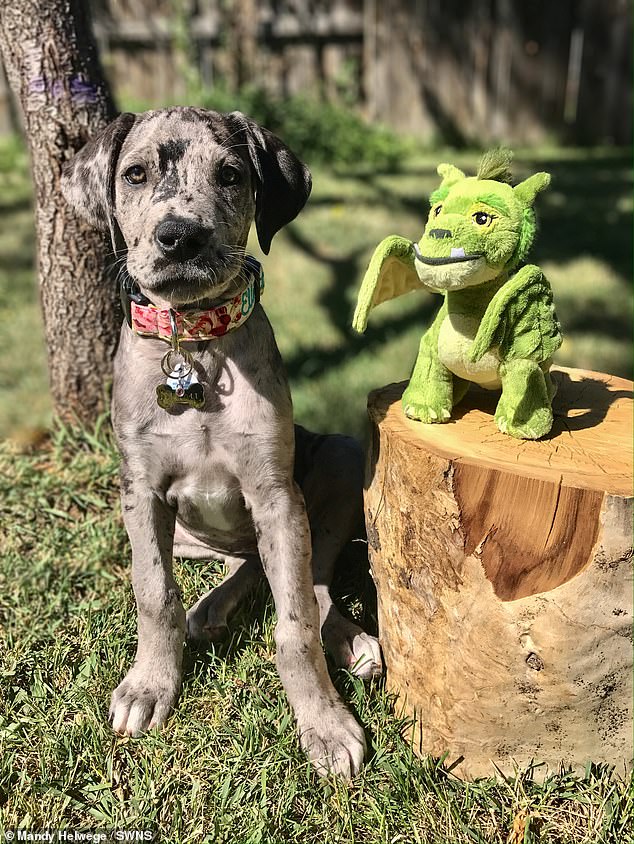 Best friends fur ever!  The Great Dane’s owner Mandy Helwege, 33, explained the family had kept the dragon and Elliot’s puppy collar as keepsakes 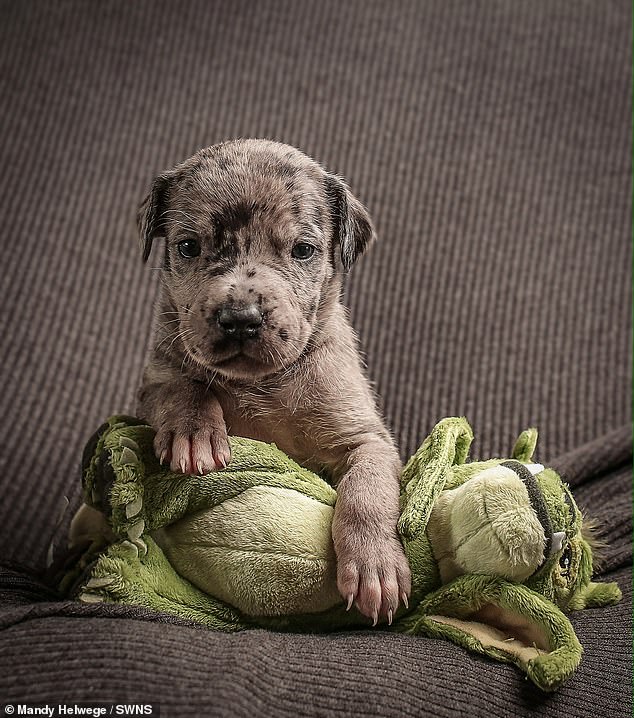 ‘We have kept it with her old collars as a keepsake for close to three years.

‘Elliot is full of life, energetic, loving and independent.

‘She’s the best hiking partner and loves to adventure and explore the mountains we have surrounding us…maybe as much as she loves being in front of the camera and the center of attention.

‘She’s not the brightest crayon in the box sometimes but she makes us laugh constantly and is my best friend.

‘I’d often heard the phrase of people referring to one of their dogs as their “heart dog” and I can’t say I understood that sentiment until Elliot came into my life.’

‘We have a connection unlike anything I’ve ever experienced or even could’ve imagined the first time I laid eyes on her.’ 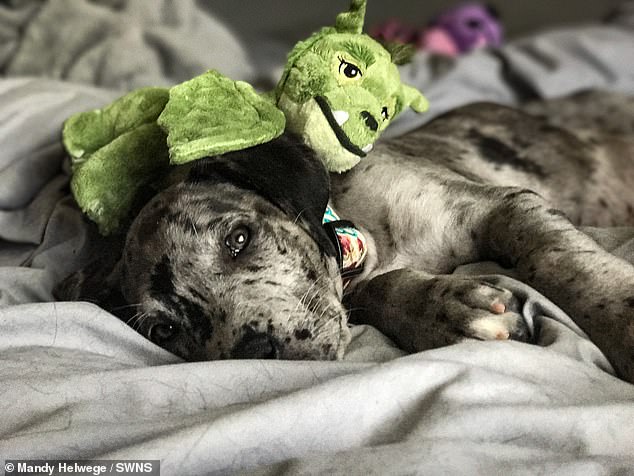 Elliot is now an active adult Dane full of energy, but she still loves to cudddle up to her soft toy 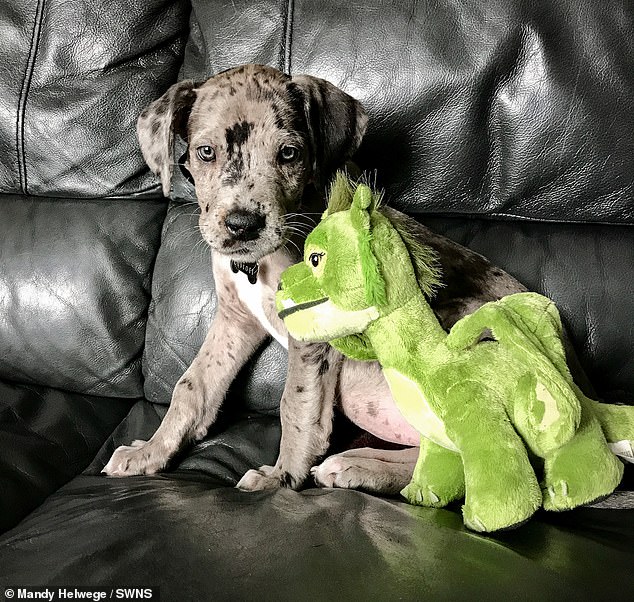 Puppy love! Elliot as a youngster with her plush pal, who has been by her side for three years 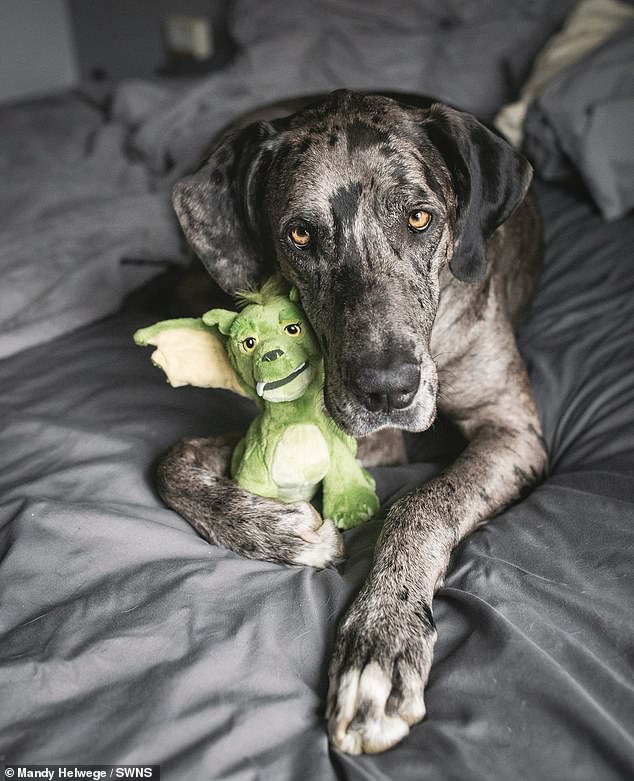 Never without my toy! The dragon used to be bigger than Elliot’s whole body but is now smaller than her head 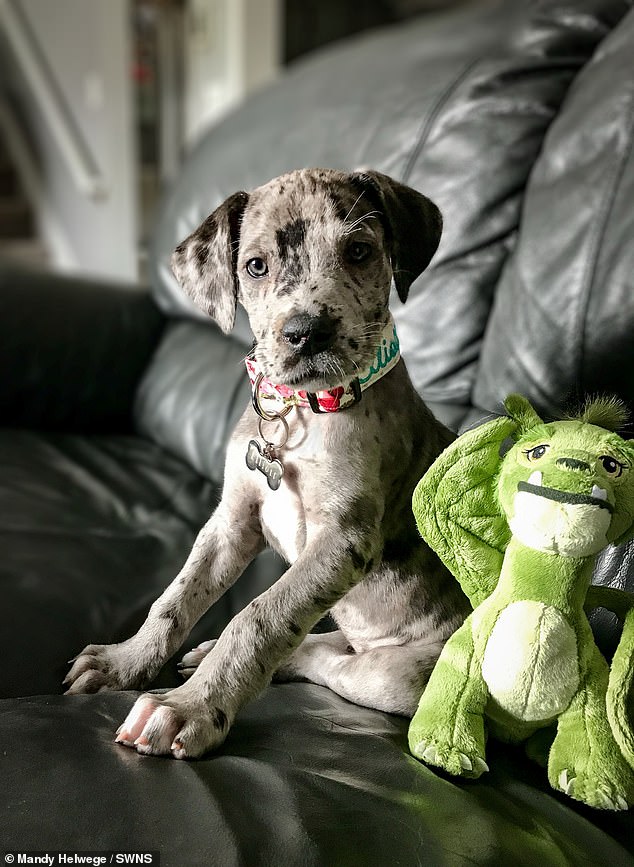 Elliott as a puppy with dragon Elliot. The amazing image set shows Elitt Mae and her favourite dragon growing up together from 2017 all the way up to 2020