Adults should be vaccinated against cancer-causing HPV, claim scientists

Adults should be vaccinated against cancer-causing HPV to save ‘thousands’ of lives, claim scientists

By David Rose and Stephen Adams for The Mail on Sunday

Adults should be vaccinated against cancer-causing human papilloma virus to save ‘thousands’ more lives, say experts.

At the moment, 12- and 13-year-olds are inoculated against sexually transmitted HPV, which causes a range of diseases including cervical and throat cancer, in the belief the vaccine works best in people who don’t yet have the virus.

But top scientists say evidence is now emerging that giving the jab to those who already harbour HPV, as 80 per cent of adults do, is likely to protect them as well.

Every year some 2,200 people in Britain die of HPV-related cancer, 70 per cent of them women. Adults should be vaccinated against cancer-causing human papilloma virus to save ‘thousands’ more lives, say experts [File photo]

The vaccine produces a powerful immune response in those with HPV that stops existing virus particles spreading in the body and being transmitted to sexual partners.

Last night, Professor Margaret Stanley of Cambridge University, president of the International Papilloma Virus Society, said: ‘Most people don’t realise that HPV infection is a global epidemic. The easiest way to prevent the spread of this virus and the diseases it causes is to give everyone a vaccine shot.’

So how can you get the jab?

The vaccine is not available to adults on the NHS – if they want it, they have to pay for it.

Pharmacies including Boots and Lloyds offer a three-jab course of the vaccine Gardasil 9, which protects against seven cancer-causing strains and two responsible for genital warts.

Boots charges £475 for the course, Lloyds £429. Current licensing conditions mean Gardasil can only be given to those under 45.

All schoolchildren aged 12 or 13 (11 to 12 in Scotland) are eligible for a free two-jab course of the HPV vaccine Gardasil 4.

Every year some 2,200 people in Britain die of HPV-related cancer, 70 per cent of them women.

Cervical cancers account for the single biggest number of those deaths – around 850 – which for years led to the vaccine being given only to teenage girls.

Last year, following a six-month campaign by The Mail on Sunday, Ministers agreed to extend vaccination to teenage boys.

The number of HPV-related cancers of other infection sites such as the head, neck, throat, anus and penis is growing fast as a result, it is believed, of changing sexual behaviours.

Prof Stanley said these cancers often emerged when people were in their 60s and their immune systems started to weaken. This enabled latent HPV virus to break out, causing tumours.

For decades it can lie hidden, evading detection so successfully that the immune system produces hardly any antibodies to fight it.

According to a paper to be published soon in the International Journal Of Infectious Diseases, research has found that vaccinating adults with HPV can trigger a ‘high level immune response’ ten to 100 times stronger than that caused by natural infection.

Legions of newly created antibodies then suppress HPV to such an extent that it becomes almost impossible for the carrier to pass the infection on.

Xavier Bosch, the cancer doctor who first proved that HPV causes cancer, said the vaccine ‘protects adults’ adding: ‘People have a right to know this.’ 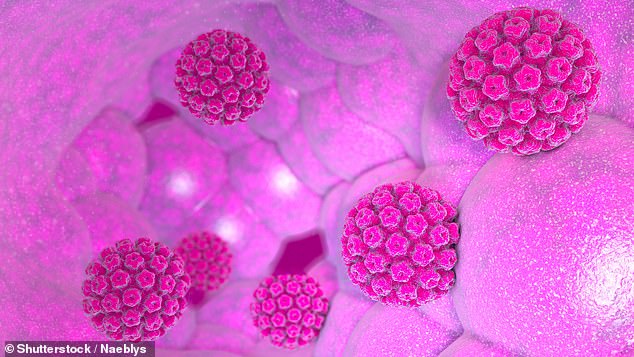 Top scientists say evidence is now emerging that giving the jab to those who already harbour HPV, as 80 per cent of adults do, is likely to protect them as well. The HPV virus is pictured above in a graphic