Posters that show a woman tied to train tracks and about to be run over as part of an advert for high-speed trains, do not promote violence against women.

A French court made the ruling after feminist groups brought a legal challenge against the poster, which was also condemned by France’s equality minister.

The advert was displayed in Beziers, south France, in December last year to promote the arrival of TGV trains service.

This poster used to advertise a train service does not promote violence against women, a  French court has ruled

The poster was captioned: ‘With the TGV, she would have suffered less.’

It shows a screaming woman tied to train tracks and moments away from certain death.

Some rope can be seen tied around her wrists, torso and legs.

It came in for severe criticism from feminist groups who accused it of promoting violence against women.

Robert Menard, the far-right mayor of the town, defended his controversial campaign and accused critics of being too politically correct.

Opposition had demanded that the mayor tear the posters down.

She was killed by her husband, who tied her to the train tracks before killing himself in a murder-suicide earlier this year. 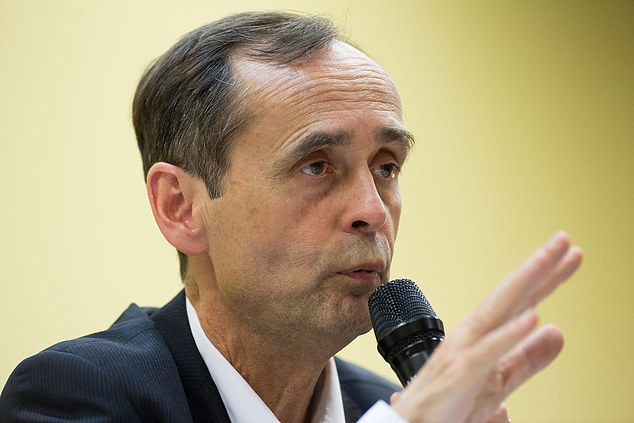 Robert Menard, the far-right mayor of Beziers, in southern France, defended his controversial campaign and accused critics of being too politically correct

Menard, elected with the support of the Front National, refused to take the posters down and said that similar photos were used in films, cartoons and music videos.

He later tweeted: ‘The outrageous and paranoid reactions to our poster speak volumes about the moral order that plagues the country.’

Montpelier administrative court ruled that the posters showed ‘a doubtful and provocative humour’ but did not ‘promote violence against women and do not target any type of person in particular’.

The judgement continued: ‘These posters are not an attack on human dignity and do not constitute a form of harassment with regard to those of a female sex.’