The flight was being towed by an airport tractor when the tip of the right wing made contact with the post, Airport Duty Officer Maria Buyco said to SFGate.

The wing of Aer Lingus flight 147 hit a concrete pillar at San Francisco International Airport after landing on Tuesday afternoon, the tip of the wing was turned upwards in the hit above 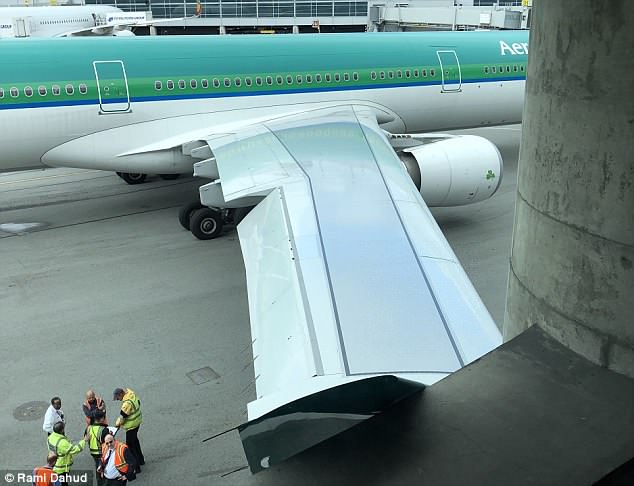 No one was hurt in the incident however passengers on board were delayed from disembarking the aircraft for about an hour after the hit. The upturned wing is above

The hit forced the top of the right wing to be bent upwards and caused passengers on the plane to be delayed on board for about an hour, until airport personnel deemed it safe enough to continue towing the aircraft.

The jet was taken to gate G-91 where passengers were able to disembark.

An airport spokesman says the tractor operator misjudged the distance of a turn, leading to the collision.

No one was hurt in the incident.

A spokesman said the Airbus A330 wing suffered paint damage and a maintenance crew will make a full inspection of the wing, according to CBS. 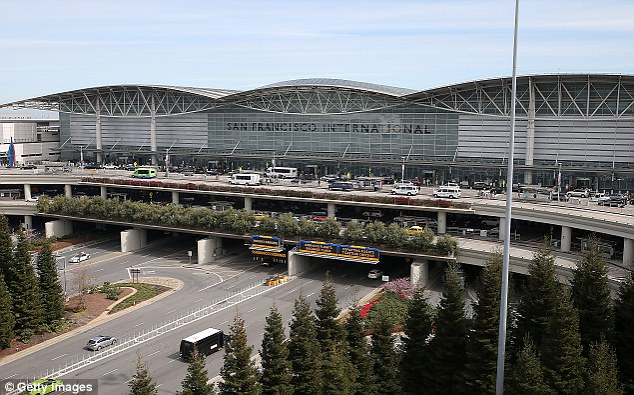 The hit took place around 3:15pm at the San Francisco International Airport, pictured above, after a tractor operator misjudged the distance of a turn, leading to the collision

‘There was a couple of loud screams. It was a bang, a good bang. Kinda made you go forward and back in your seat again, yeah. But everyone was shouting, can we get off can we get off?’ Maira Louise of Belfast, Ireland said to NBC.

Speaking to Independent.ie, an Aer Lingus spokesperson said: ‘Aer Lingus can confirm that while EI147, arriving in San Francisco airport from Dublin, was being towed to its stand by the ground handling agent, the winglet of the aircraft touched the airport terminal building. Some minor damage was caused to the winglet. None of the guests or crew aboard the aircraft were injured.’

As a result of the collision a flight from San Francisco to Dublin was cancelled as an investigation took place.